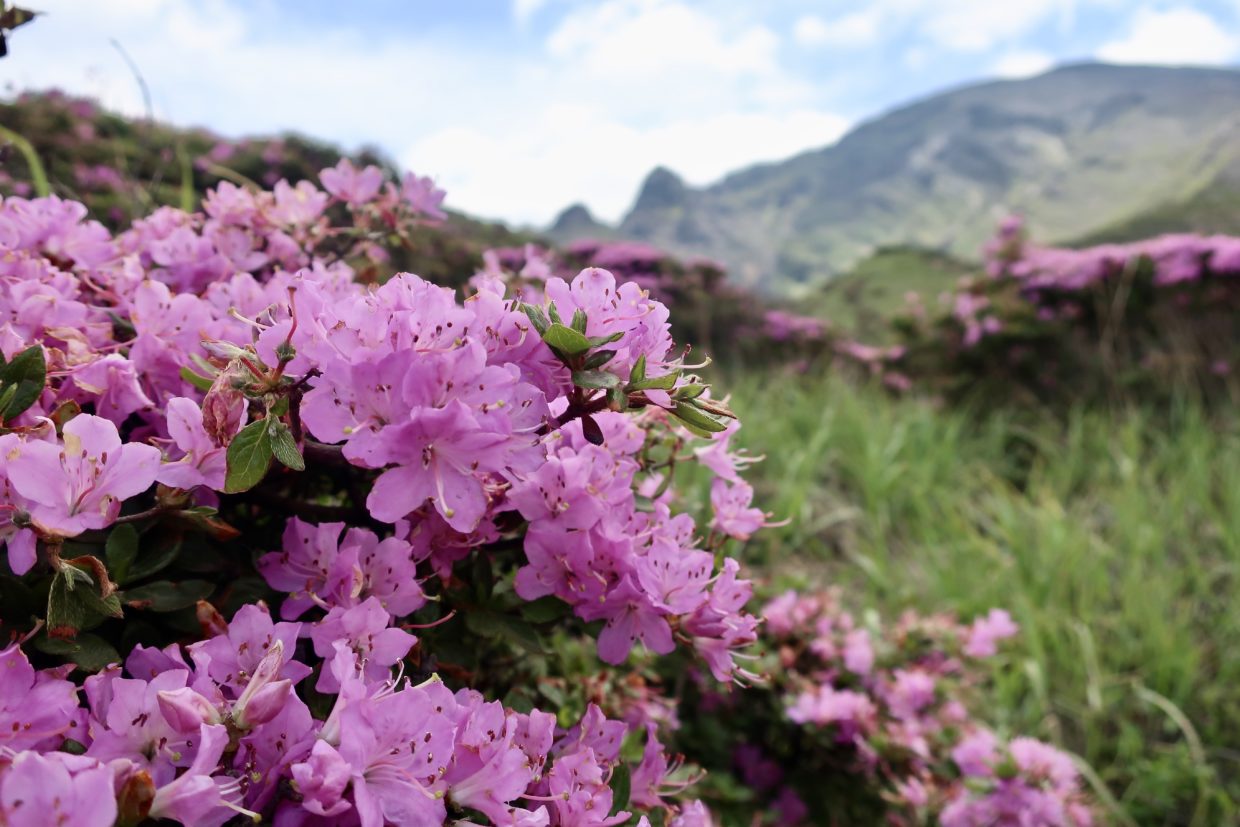 Sensuikyo(仙酔峡) in Aso where you will immerse yourself in its beauty and elegant Kyushu Azalea(ミヤマキリシマ, Miyama Kirishima).

There are four distinctive seasons in Japan. We love following their changes and don’t want to miss anything. Because of the effect from COVID-19, we were not supposed to go out unnecessarily and many organizations were forced to cancel their seasonal events. Recently, the regulations have been relaxed a lot but still many people are anxious about how to start a new life coexisting with the virus. Even in this chaotic situation, nature never stops changing and keeps presenting us their best highlights.

Today, I’d like to introduce to you 仙酔峡(Sensuikyo) in Aso. Sensuikyo is a beautiful gorge which shows its best beauty during May to June with elegant ミヤマキリシマ(Miyama Kirishima, Kyushu Azalea).

I guess many of you live in outside of Kumamoto so sadly you can’t visit here now. But by introducing this beautiful Sensuikyo, I want you to feel Aso of this moment and wish this information will be helpful for you to arrange your future trip to Aso. Let’s get to know about Sensuikyo and what stories they have.

Where is Sensuikyo in Aso caldera? ~Scenic spot where you can see “Lying Buddha” closely.~

If you can understand Chinese letters, you may wonder the meaning of 仙酔峡(Sensuikyo). “仙(sen)” means hermits, “酔(sui)” means being intoxicated or being immersed in something and “峡(kyo)” means gorges. So, “仙酔峡(Sensuikyo)” means “A George that intoxicates even the hermit’s heart with its beauty”.

As the name shows, Sensuikyo is famous for its beautiful landscape. Sensuikyo is located in Aso City and it’s in the north foot of 中岳(Mt. Nakadake) and 高岳(Mt. Takadake), which are one of the five peaks consisting “Lying Buddha” in Aso caldera.  So where is Sensuikyo in the caldera? In the previous articles, I explained about the locations of 大観峰(Daikambo) and 俵山展望所(Mt. Tawara Observatory), which are the major scenic spots in Aso. Check the drawing below and imagine where you stand and the difference of the views each shows.

From Daikambo and Mt. Tawara Observatory, we can see inside of the caldera by standing at the outer rim. But from Sensuikyo, because we are at the mountains in the caldera, we can see the northern outer rim from there. The hight of Sensuikyo is 900m above sea level. It is said that Sensuikyo was created by lava flow after the eruption. Most of the time, we can see bare rock mountains all over but only in spring, ミヤマキリシマ(Miyama Kirishima, or Kyushu Azalea) will cover on the face of the mountains and many people visit and immerse themselves in its beauty(I’ll introduce about Kyushu Azalea later in this article).

⬇️ To get to know more about Aso caldera, check the previous article below!

Sensuikyo is also a trailhead to Mt. Nakadake and Mt. Takadake. Mt. Nakadake is an active volcano which has been erupting since last April. Japan Meteorological Agency shows 5 volcanic alert levels and they have announced that it is level 2 (May 2020), which means we can’t approach no more than within 1km to the crater of Mt. Nakadake. Mt. Nakadake emits volcanic gas so they recommend not to climb if you have asthma, bronchitis or heart diseases. Now, we can visit Sensuikyo but the trailheads are closed.

As the name shows, Kyushu Azalea grows only in high volcanic mountains in Kyushu area, mainly in Kagoshima, Kumamoto and Oita. Kyushu Azalea is shrub and blooms from May to June. During this season, pink carpet covers on the surface of rocky mountains and it’s one of the highlights of spring.

Interestingly, Kyushu Azalea can live only on bare rock mountains in volcanic field which is a severe environment for most plants. In these areas, soil is extremely dry and plants are exposed to cold and strong wind at all the time. Only in this severe circumstance, Kyushu Azalea can survive as a dominant species. If the volcanic activity finishes and many plants start to flourish, then Kyushu Azalea will be extinct losing out their habitat.

So how is Kyushu Azalea in Sensuikyo? I visited Sensuikyo in the middle of May 2020. One month ago, I had a chance to visit Sensuikyo and at that time everywhere was black after Controlled Burning(Noyaki). It was only one month later but I saw green grass covering all over and witnessed the great power of nature.

⬇️ To learn about Controlled Burning(Noyaki) in Aso, check the article below!

Drive forward and you will find a parking lot. You can see Mt. Nakadake and Mt. Takadake closely and also the elegant Kyushu Azalea colony. As I explained, Kyushu Azalea grows only on the surface of volcanic mountains so you will enjoy the contrast of Kyushu Azalea colony and the black bare rocky mountains. It looks like these pink carpet suddenly appeared in this monotone landscape.

Usually, Sensuikyo is not crowded at all but only this season, people keep coming to enjoy this highlight of spring in Aso. I visited there on weekday but still I saw many people(just to make it clear, people were wearing masks and kept social distance). Many people enjoyed taking photos trying to capture the best moment.

Keep walking along the gentle slope, then you will arrive at an observatory. This is another scenic spot to enjoy the grand Aso caldera. As I explained earlier, you can see the north outer rim of Aso caldera.

I heard that there is a festival called ツツジ祭り(Tsutsuji Matsuri, means Azalea Festival) every year at Sensuikyo but because of COVID-19, they canceled this year. Hopefully, there will be a festival next year. I will check and share the information next spring!

Other things to know about Sensuikyo(仙酔峡)

When it comes to Sensuikyo, people think of the amazing scenery and Kyushu Azalea but there are other things you will notice.

On the way to Sensuikyo, you will notice this 仏舎利塔(Bussharito) means a stupa. Stupa is a Buddhist prayer hall or a temple which stores Buddha’s ashes(usually the remains of Buddhist monks). It is said that this stupa was built in 1967 by a Buddhist monk named 藤井日達(Nittatsu Fujii) who was from Aso City. He worked hard for peace movement across the sects of Buddhism and had built many stupas around the world wishing for world peace. I heard that he built 73 stupas, not just in Asia but Europe and the US, too. You can see one of his works on the way to Sensuikyo. There is a huge Buddhist statue on the building.

After you pass the stupa, you will arrive at the parking lot and see this building. It says “ロープウェイ(Ropeway)”. When I first visited there, I wondered what it is and wether it is open.

There used to be a ropeway, called 仙酔峡ロープウェイ(Sensuikyo Ropeway). Sensuikyo Ropeway was built in 1964 and it used to carry many visitors to the eastern part of the crater of Mt.Nakadake.

In Aso, there is another ropeway, called 阿蘇山ロープウェイ(Mt. Aso Ropeway). It used to connect to the western crater which is the main access to the crater and more people used it(It is closed after the earthquake in 2016.). The number of annual visiter of Mt. Aso Ropeway was 570,000, whereas Sensuikyo Ropeway was only 85,000. Most visitors of Sensuikyo Ropeway concentrated mainly in spring to see Kyushu Azalea so it tended to be rather empty in another seasons.

Sensuikyo Ropeway was run by a third sector company. They had been in a serious financial condition because of the difficulty of getting enough visitors. To make things worse, some motors were damaged and they were forced to shut down the ropeway. It would cost a lot to reopen so they looked for another company which could succeed the business. It didn’t work well so in 2011 the company announced they closed the ropeway.

I visited Sensuikyo in April and walked around the building. At that time, I didn’t know anything about the ropeway and its history so I was just wondering what it was. At that time, there was no one but me and the sky was hazy. I thought this place was totally a ruin and felt loneliness and sadness. You can still see a cable car which was installed in 2003.

When I came back one month later, I saw many people coming back maybe after a year to see the beautiful Kyushu Azalea. I was happy for Sensuikyo to welcome people and get full of sprit again.

In 2016, we had the two big earthquakes in Kumamoto and they left huge damages to our lives. Some roads to Sensuikyo was also severely damaged so it had been closed. After 3 years later, they finished reconstruction and reopened the gate. Now in 2020, we are facing how we build up our lives again. It is definitely a long way to go to get our daily lives back but because of this situation, we should appreciate the nature and cherish the changes to get peace back in our mind.

I wish sometime in the near future you will visit Kumamoto again and drop by at Sensuikyo. You will be immersed in the beauty of the landscape and enchanted by the power of nature. For now, please take good care of yourself and your loved ones. Stay safe.