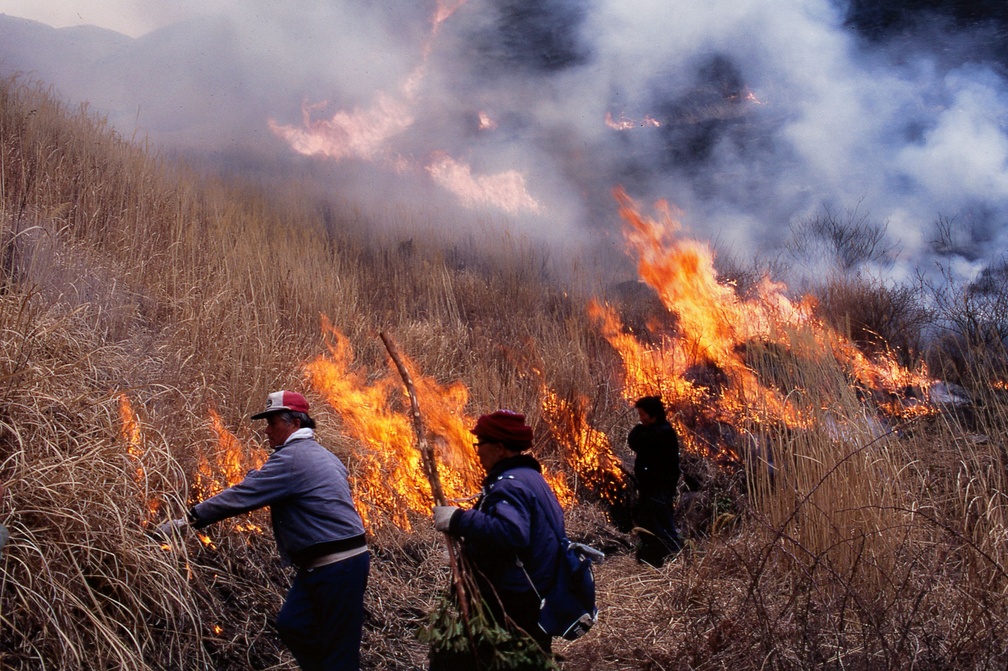 Controlled Burning(野焼き, NOYAKI) ~ Essential activity to maintain the beautiful grassland in Aso passed on for over 1,000 years~

When you visit Aso, what is the first thing that attracts you? On the way to Aso, you drive winding roads for a while then see this vast grassland.

The grassland in Aso is the largest in Japan and shows different beauty in each season. In summer, you will enjoy green fresh grass everywhere in Aso.

When autumn comes, you will see the golden-colored susuki grass (it’s translated as Japanese pampas grass) covering all over.

In winter, snow covers everywhere and it will be all white.

When you come to Aso in spring, especially during March to April, you will come across “Black Aso”. I just named it but you will see all the surface burned out or you may happen to see people actually burning the grass.

It is called controlled burning(called Noyaki in Japanese) which is an essential activity to maintain this beautiful grassland in Aso. It is said that people have carried it out for over 1,000 years.

After learning the importance of controlled burning, I decided to join a volunteer activity for my first time this year. Let’s get to know about how controlled burning works for Aso and how people have involved in it.

1,000 year-history of Controlled Burning(Noyaki) in Aso

How people in Aso have lived with Grassland?

Aso is famous for its caldera and it is one of the biggest calderas in the world. Interestingly, Aso is the only place where people actually live in a caldera.

※ Let me explain about “caldera” briefly. Have you ever heard of the word “caldera” before? Caldera is an English word but originally from Spanish, meaning “a large cooking pot”. After an eruption, all the magma inside of a caldera is released and only a collapsed landform is left. This collapsed landform is called caldera and people described it as a huge cooking pot.

In the past, living in Aso was very severe. People used to suffer poor productivity because of the cold weather and acid volcanic ash.

So how did people survive in that difficult situation?

They farm horses and cows, which eat fresh grass, and leave manure. People mix them with grass making fertilizer and use them for growing crops. Soil improvement has been done with time and people’s hard work. Also, people used grass for making thatched roof. Grass is very light so it was easy for people to carry even though they live in hills or highlands.

It was certainly a sustainable living and people lived with this cycle for over 1,000 years. Gradually, the productivity became better and now Aso is the 6th biggest agricultural production in Japan. Aso is registered as Globally Important Agricultural Heritage Systems(GIAHS) aiming to preserve the great and unique  agriculture which has sustained with volcano.

What happens if we stop Controlled Burning(Noyaki) in Aso?

Nowadays, shrinking the grassland has been a big problem. If we stop controlled burning and just leave grassland as it is, it would turn to be a forest within 20-30 years due to humid and extratropical climate in Japan. There are several reasons why it is happening.

First, because of the decreasing number of livestocks. In the past, people used to use their horses and cows for helping them doing agriculture and carrying things. Because of advanced agricultural machines and implements, livestocks are no use for that. If they don’t eat grass, grassland will turn to be bush and end up to be abandoned.

Second, aging society and depopulation. Controlled burning needs a lot of workforce to be done properly and safely. In Aso, there are many mountains and hills so elderly people can’t go these steep areas so many places have been abandoned nowadays.

Lastly, the ecosystem has been effected because of the shrinking grassland. Aso is a rich repository of wild plants and living creatures which have lived with grassland. They are facing the danger of losing their habitat.

How can we protect Glassland?

To tackle the shortage of manpower, they seek for volunteers. Aso has attracted many people and some of them join controlled burning because they want to contribute to protect it. Now, over 2,000 people are registered as a volunteer from all around Japan.

Also, Grassland Centre organizes workshops for local children and tells them how grassland in Aso is precious and how they will pass it on to the next generations.

Efficient usage of pasture land is also encouraged. It is important to graze grassland with more livestocks. Grassland Centre started the Aka-ushi(Red cattle) ownership system to collect fund and support livestock farmers. Red cattle is one of the famous local cuisine in Aso. There are some restaurants which offer Aka-ushi beef cuisine. You can enjoy local cuisine and contribute to save grassland.

Recently, I saw an interesting news about grass in Aso. In this winter, susuki grass in Aso was sold to a town called Miyama Town in Kyoto to make thatched roofs. Miyama Town had had difficulties to find good grass nearby to make thatched roofs which is a symbol of the town. For Aso, they have grass more than enough so it is a great opportunity for Aso to use their resources efficiently and get fund to protect grassland. I heard that almost 70t of grass in total will be shipped until this June.

Locals have worked hard to pass on their beautiful landscape to the next generation and it made me think to do something to contribute to it.

Before joining controlled burning, we should take one-day training. It was held at Grassland Centre in Aso city. I also asked my Indian friend who is also interested in controlled burning. If you can understand above intermediate level of Japanese, you can join the training.

I was surprised to see many people who were from other prefectures, such as Fukuoka, Oita and Miyazaki. They said they decided to join controlled burning because they love Aso and wanted to do something to preserve the beautiful grassland.

After lunch, we made 火消し棒(Hikeshi-bou, means fire extinguisher) which is made from bamboo and vine creeper. During controlled burning, sparks may fly to unwanted places so we watch carefully and use the stick to put out fire. Vine creeper is flexible but still I struggled weaving into sticks. Wheres my friend finished quickly nice and neat!

Then we practiced how to used it. The stick is about 2-3m length. We hold it high and hit it to the ground, pretending like there was a fire.

We also practiced how to use “Jet Shooter” which is shooting water to put off fire. When it’s full, it’s almost 20kg! I was wondering how could I walk all the way if it’s so full…

On the day of Controlled Burning(Noyaki)

Controlled burning is weather-dependence. In this March, the weather was very changeable and tended to be windy so there were a lot of changes of schedules. I have a friend who works for the Grassland Center. He said he had been extremely busy to manage scheduling and contacting volunteers to make sure they send enough people to each place. We should appreciate them, too!

Before joining controlled burning, we should prepare proper equipments. For our clothes, we should wear natural fiber fabric, like cotton not synthetic fiber because heat will melt these fiber and they will stick on you. Also protecting our eyes and mouth is important so wearing goggles and masks are highly recommended. And the number of Jet Shooter is limited so volunteers should carry at least 2L bottle of water.

On the day of controlled burning, the meeting time was 8:45. About two days before the date, we receive details where and what time we gather. At first, there were 8 people in our volunteer group and there was a leader who is experienced in controlled burning. Local people arrived and we joined them.

Our group was divided into two and the group I belonged to was carried to another place by a truck. Actually it was my first time to seat at the back of a truck! It was exciting! We headed to a pasture land where people usually can’t enter because human can carry virus or decease and cattle can get them from us.

We, volunteers followed locals. Only a few people who have experienced at most can set on fire. Basically, volunteers are supposed to watch over if fire would spread another places. At first, we arrived at one field where there is a bush and houses nearby. In these area, people cut grasses between grassland and places where we don’t want to burn. This is called “輪地切り(Wachi-giri)”. By doing Wachi-giri in advance, we can prevent fire from spreading to unwanted places.

What I noticed was how strong wind gets onto the hills and how wind empowers fire. Sometimes I felt fear. During the training, I heard some people died in the past during controlled burning.

Volunteers got a fire extinguisher each but I saw some locals holding just a branch of cedar instead! I wondered if it was enough but it worked for them!(I guess it would’ve been too hot for me, though…).

The other volunteer group went up to Mt. Kome-zuka(米塚). We could see how fire spreading around Mt. Kome-duka(I took photos after our work was done. We are not supposed to take photos without permission).

We started around 9am and finished around 3pm. I didn’t do much work but felt tired because of the tension that we should finish it safely and also we walked for a long distance. It was a great opportunity for me to see how controlled burning is carried out and how locals have involved in it.

After joining controlled burning, I couldn’t appreciate enough for local people who have passed it for generations. I hadn’t expected it needs such great effort to maintain this beautiful grassland, both human activity and power of nature. I will join next year, too.

Visit Aso and appreciate the changes grassland represents to us.

After experiencing controlled burning, I had a chance to visit Aso and dropped by 仙酔峡(Sensui-kyo).

All the mountains and hills were burned out and I saw cows came back. I felt it is a start of another year. After burning grass, you will see fresh green grass and some lovely wild flower coming up from black ashes. Aso never stops changing. Visit Aso and enjoy the changes it represents. They will entertain you at any time of the year.