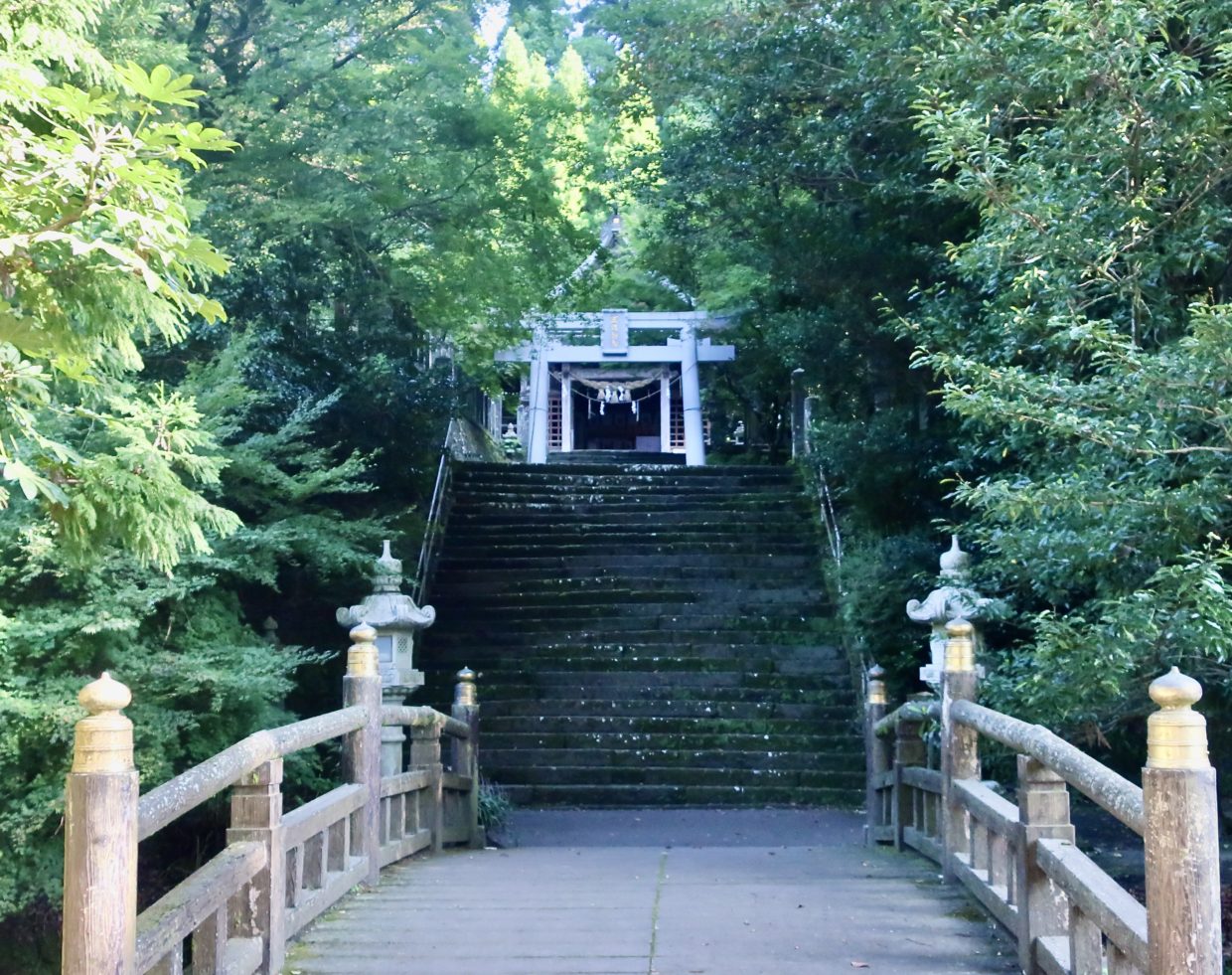 あけましておめでとうございます！
Happy new year!
Frohes Neues Jahr !(I will restart learning German 2020!)
I wish this year will be the happiest and the best for you.

For my first article in 2020, I chose 国造神社(Kokuzo jinja, means Kokuzo shrine) in Aso.

For the last few months, I had frequented Aso to join a course for the licensed guide interpreter in Aso region. I have kept writing articles here(I couldn’t recently, though…) and I thought it would be great if I can interact with tourists face to face and share amazing places in Kumamoto. Thanks to all the help by my classmates who have different and interesting backgrounds, I could pass the exam and I got the licence! Starting guiding is one of my new year’s resolution(Actually,I have many in 2020!) and I wish I could show you around Kumamoto and let you bring great memory of Kumamoto back home.

In Kumamoto, we had two big earthquakes in 2016 and one of the epicenter was in Aso. It caused the collapse of Aso bridge and the huge destruction to 阿蘇神社(Aso jinja, means Aso shrine).

People in Aso was in deep sorrow to see how Aso shrine was damaged because it is their emotional support and people have lived closer to it.

Kokuzo shrine stands near Aso shrine. Kokuzo shrine has more than 2,000 years of history and is one of the oldest shrines in Kumamoto. It is not well-known like the famous Aso shrine but it is also beautiful and loved by locals. There are some interesting connections between both shrines.

Let’s learn about Kokuzou shrine and what interesting stories they have.

First, let’s learn a little bit about the basic structure of shrines. When you arrive at a shrine, you will see a gate first. It’s called 鳥居(Torii, means Torii gate).

Torii is a gate to the main hall and it separates from the world of gods and the world of human. Walking on the approach and on your right or left side, you will see 手水舎(Chouzuya) which is a place to wash your hands and mouths before praying for gods.

At Aso shrine, unusually sando approach stretches horizontal to Torii gate. Can you guess why is it?

In 神道(Shintoism), there is not only one god but we believe gods live in everywhere in nature. Especially in Aso area, people have worshipped volcanos.

Aso shrine worships 健磐龍命(Takeiwatatsu no mikoto) who is well-know as “the god of Aso” in Japanese mythology. He is told to have pioneered Aso area and worked hard for people to have better lives.

Interestingly, the sando approach of Kokuzou shrine and of Aso shrine is on the same line to Mt. Nakadake. By these sando approaches, we can see how people in Aso have worshipped volcano and lived closer to it.

Whom do Kokuzo shrine and Aso shrine worship?

Kokuzou shrine worships 4 gods and the main god is called 速瓶玉命（Hayamikatama no mikoto) who is the son of Takeiwatatsu no Mikoto(the god of Aso). This is another connection between Kokuzo shrine and Aso shrine.

The son of the god of Aso(I’ll call him “the son” because it’s too long…) also dedicated himself to improve locals lives with his father. It is said that the son irrigated water and taught people how to farm and look after livestock. So the son is worshipped as “the god of harvest” at Kokuzo shrine.

In Aso, there are still some rituals and festivals wishing for another bountiful harvest.

At Aso shrine, there is “火振り神事(Hifuri-shinji)” which is the ritual of brandishing torches in the middle of March to pray for the productiveness of grain.

There is another festival called “御田祭り(Onda Matsuri)”. In this shrine ritual, various gods such as Tateiwatatsu no mikoto(the god of Aso) and Hayamikatama no mikoto(the son of the god of Aso) ride on 神輿(Mikoshi, means a portable shrine) and see how rice grows. At Kokuzo shrine, this ritual is held every year on July 26th and at Aso shrine, on July 28th.

※ Have you heard of “Lying Buddha” in Aso? It is consist of 5 peaks of mountains in Aso caldera. People describe this look as lying Buddha.

Actually, when it comes to lying Buddha, people think of Buddha lying side-down. But in Aso, he sleeps facing-up. Locals make a joke saying like because the Buddha in Aso behaves very well!

As soon as you arrive at Kokuzo shrine, you feel the peaceful atmosphere. While I was joining the guiding course, I often visited Kokuzo shrine.

Walking on the approach(Here, you can see the sando approach stretching vertically.), you will see this stone bridge and 手水舎(Chozuya) on your left.

While I was exploring around Kokuzo shrine, an elderly woman came. She started to clean around the worship hall, clearing fallen leaves. When I saw the lady, I could feel how people live closer to the shrine and take care of it by locals.

Inside the ground of Kokuzo shrine, there is a small 鯰社(Namazu sha, means catfish shrine).

There is an interesting story about Catfish shrine. Previously, Aso caldera used to be a huge lake.

Takeiwatatsu no Mikoto(the god of Aso) wanted to get rid of all the water so that he could get land for people to live. He kicked one part of the outer rim and water flew out. But gradually it stopped. The god of Aso wondered why and checked the broken part. Then he found an enormous 鯰(Namazu, means catfish) lying and blocking. Actually, the catfish was the nymph of the lake.

Even though the story is fictional, there is a real connection between the myth and fact. The area that was kicked by the god of Aso is actually collapsed by the earthquake in 2016. That means the part was geologically weak. You can see the gap from 大観峰(Daikanbo) that is one of the scenic spot in Aso.

What’s famous of Kokuzo shrine is 手野の大杉(Teno no Osugi, means The huge cedar of Teno). It is said that the son of the god of Aso had planted it and it’s more than 2,000 year-old.

There used to be two cedars but one of them was burned down because of the thunderbolt about 200 years ago. The survived one was once registered as Natural monument but after the strong typhoon in 1901(Maximum wind speed was 60.9m/s), it was broken down. Even after many trials to recover the cedar, such as the prevention of corrosion or soil improvement, it didn’t get better and finally it withered. So the institution of Natural monument unregistered the cedar.

The locals were so sad not just because the cedar was unregistered but because they lost the cedar which is the symbol of Kokuzo shrine and which people have lived closer to. So locals established an organization to preserve the cedar.

This cedar used to be around 47m high and 12m of its perimeter. They have cut from the bottom 2.5m to 7m and built the roof to preserve the ruins of the cedar.

It is true that the number of tourists had been decreased so much after the earthquakes but thanks to all the hard work by people who live in Aso and who love Aso, it’s getting better and better every year.

Aso is famous for the great nature but getting to know the history of it helps us to understand deeper how people have lived closer to it and respected it all the time.

Visit Aso and don’t miss this beautiful Kokuzo shrine. You will feel how great Aso is.