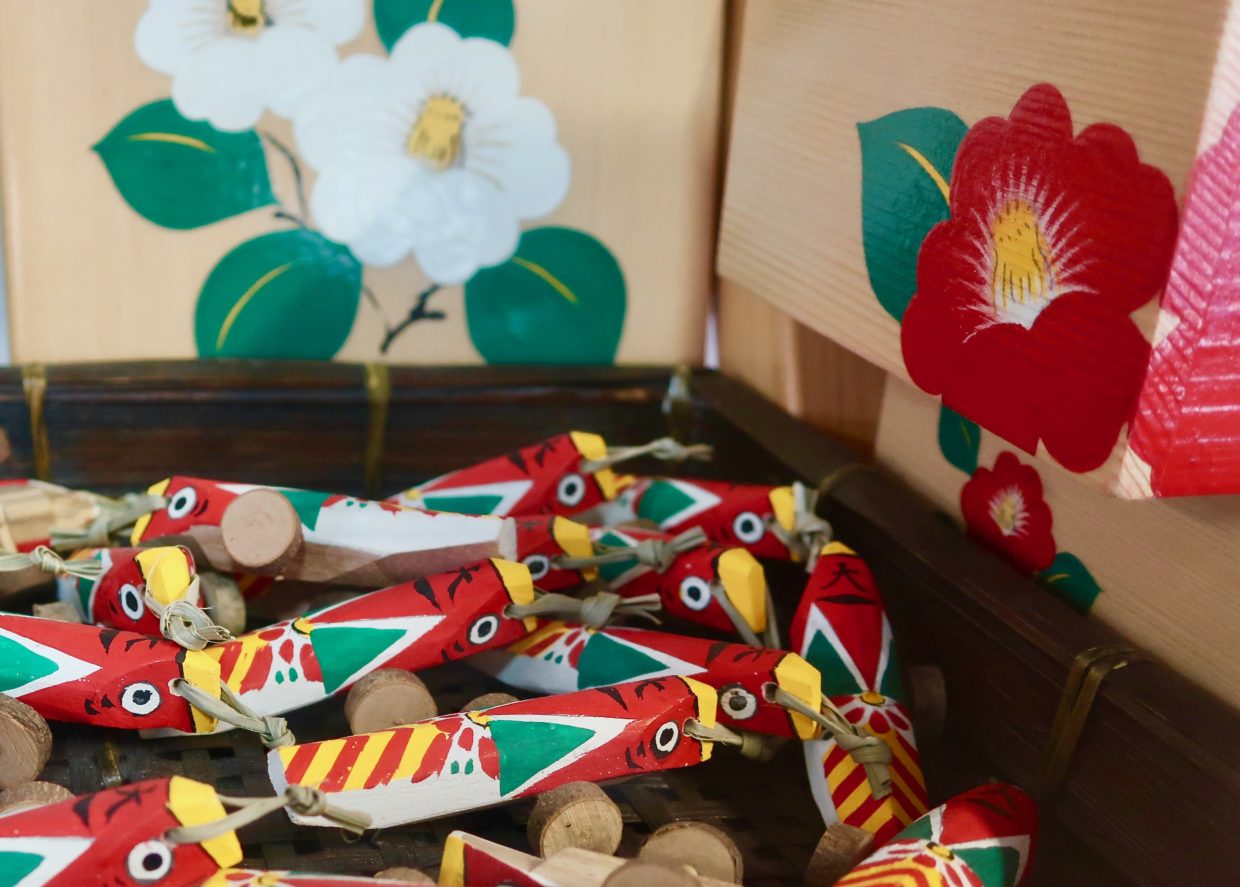 At some point in life, something we thought it’s out-dated started to look modern and sophisticated. Traditional crafts are definitely one of them. Because materials and craftsmen are already amazing, we can use and love traditional crafts for a long time. Local craftwork is a footprint of the region and tells us many stories. There is no reason not to learn about them.

Let’s learn about traditional crafts in Hitoyoshi and history of them!

What we can do at HITOYOSHI CRAFT PARK ISHINO PARK(人吉クラフトパーク石野公園)?

※ I’ve already introduced some places in Hitoyoshi. Check them and arrange your plan for your Hitoyoshi trip!

KANOME WATERFALL(鹿の目の滝) ~ONE OF THE BEST 100 WATERFALLS AND CONSISTS OF 3 KINDS OF WATERFALLS, HITOYOSHI KUMAMOTO~ → https://untappedkumamoto.com/nature/1838

Hitoyoshi craft park Ishino park is a theme park where you can experience hands-on experience making local traditional craftwork. There are many workshops depending on materials, such as bamboo, clay, iron, leather and glass.

For example, in the wooden workshop, you can make “マイ箸(my hashi, means my own chopstick)”. You can write your name on it with an electric pen.

In the iron workshop, you can make a Japanese cutting knife by traditional way in Hitoyoshi. You can make one for you or for someone as a present.

At every workshop, local craftsmen will teach you so don’t worry.

It’s great if you can forget the hustle and bustle life and just concentrate on what you are doing at the present. You may be addicted to that moment!

There are so many activities at Hitoyoshi craft park Ishino park but this time, my friends and I tried to paint on 花手箱(Hana-tebako).

Hana-tebako is made of wood such as fir tree, cedar tree, cypress etc. and red camellia is painted on it. “Hana” means flower and “tebako” means a jewel box in Japanese.

There is another popular craft in Hitoyoshi which is called “きじうま(Kiji-uma)”.

Kiji-uma is made of wood such as oak tree, paulownia wood(called 桐 ”Kiri” in Japanese and used for expensive furniture), etc. On the body, 4 wheels are attached so children can drag them. For big ones, children can mount it.

“Kiji” means Japanese pheasant（雉 Kiji） and “uma” means horse. Why does the name Kiji-uma include “horse” even though its shape is pheasant?

I’ve checked some websites and one says that people in the past named Kiji-uma wishing for their children to have better life. Hitoyoshi area has been famous for logging. At that time, there was no cars to carry logs and in some narrow roads, people even couldn’t use horses. Still, they needed to carry timbers so it was a real hard labor. Because Kiji-uma has wheels on its body, kids can play dragging it just like they drag horses.

People wished for their children to have bright future. In Hitoyoshi area, they used to buy Hana-tebako as a present for girls and Kiji-uma for boys.

How did Hanatebako and Kiji-uma started to be produced? ~ Learn about the Tale of Heike(平家物語) ~

Hana-tebako and Kiji-uma are famous local craftwork in Hitoyoshi but we can see them in some places in Kyushu area. Each looks slightly different and the name is a little different, too.

This is because “平家の落人(Heike no Ochiudo)” started to make them. To explain about “Heike no Ochiudo”, I will tell you briefly about 平家物語(Heike monogatari, means the Tale of Heike) first.

The Tale of Heike is a collection of war tales between 源氏(Genji) and 平家(Heike) in 12th century. Genji is a group of people of nobility and Heike is a group of samurai. Heike family had been samurai which was despised at that time.

After having struggled for years, 平清盛(Taira no Kiyomori) who was the head of Heike succeeded to build good relationships between Emperor family, nobilities, shrines and temples and climbed the ladder of success fast. At the end, he became the top of nobility for the first time for samurai. Because of the great success, Taira no Kiyomori became very very arrogant and forgot to respect others. Genji which is original nobility, people in shrines and temples got furious about Kiyomori’s behaviors and they started revolt against Heike. Actually, Heike won this fight and Taira no Kiyomori got more arrogant and kept holding the tremendous authority.

One day, 平重盛(Taira no Shigemori) ,who was a son of Kiyomori, suddenly died and Kiyomori deeply grieved because Shigemori was supposed to be his heir. Shigemori was the only person who always convinced Kiyomori to be decent and respect others.

After Shigemori’s death, 徳子(Tokuko) ,who was a daughter of Kiyomori and married to the Emperor at that time, had just gave birth a boy who would be the next emperor, Emperor Antoku. Kiyomori was astonished and this is the peak of Heike ’s flourish.

After that, nobilities, shrines and temples gathered to fight against Heike because of their politic and they couldn’t stand it anymore. Suddenly, Taira no Kiyomori died and Heike which lost its charisma weaken their power and Heike would decline rapidly. After Heike had lost the big fight between Genji, people of Heike family were forced to leave the capital Kyoto and ran away to Kyushu area.

After Heike no Ochiudo came to Kyushu, they needed money for their living so they made Hana-tebako and Kiji-uma to get income.

Heike no Ochiudo missed their hometown Kyoto so much. On Hana-tebako, red camellia is painted. The reason of red camellia is that they get a lot red camellia in Hitoyoshi area and also red color used to be the symbol of Heike. Heike used to hoist red flags for wars and it was their proud.

On the head of Kiji-uma, there is a Chinese character “大”. In Kyoto, there is a Buddhist event called “送り火(Okuri-bi)” in the mid-August. In Japan, the period from 13th to 15th August(it’s a little different depending on the region) is called お盆(O-bon) which is believed spirits of our ancestors come back to our house. On the last day of O-bon, people light fires on one mountain in Kyoto shaped “大” to send off the spirits. Heike no Ochiudo missed their hometown so much and they wrote “大” on Kiji-uma.

There are several traditions and festivals which Heike no Ochiudo had left in Kyushu. Knowing these cultures will make us feel close to them.

It was our first time to try painting Hana-tebako.

First, you can choose one box. One is basic red camellia box and the other is red camellia with Kumamon(regional mascot of Kumamoto). I chose the basic and one of my friend chose Kumamon one. They sketched on the box already so you don’t need to worry about drawing.

First, the craftsman explained how we paint the box and which order to color the box.

We painted carefully with the order of yellow, green, red and black.

What I found most difficult was the petal part. We brushed the red color in the petal carefully to express the bright white part inside.

You may think it’s just a small box but actually it took about 90 minutes to finish painting! First, we were talking and saying it’s difficult! but gradually we started to concentrate on painting and got into each world. It was such a great time just focusing on what we were doing and we could complete such a beautiful work.

In the workplace, they sell products such as bamboo products, Hana-tebako and Kiji-uma which professional craftsmen made.

They show how Kiji-uma is made from a piece of a wood to completed one.

After that, we played with traditional toys, such as bamboo-copter and けん玉(Kendama) with craftsmen.

Age doesn’t matter if the toys are fun to play!

There are so many activities at Hitoyoshi craft park Ishino park and you can bring your own craftwork back home as a good memory of Kumamoto.

I’m sure you’ll deepen love to Kumamoto by learning more about its history and culture.