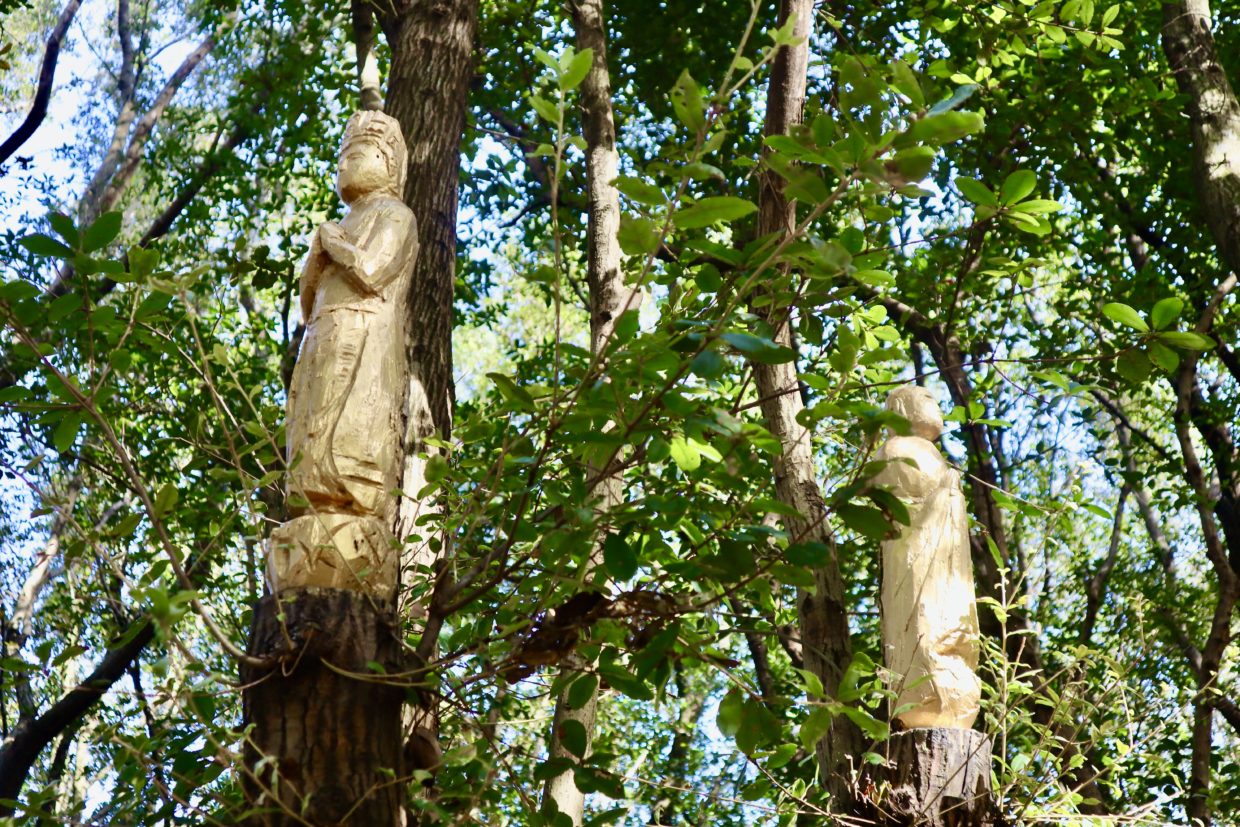 Tsunagi Town has promoted itself as “Town with Mountains and Sculptures” wishing people a peaceful life. Here are two more artworks you can enjoy in Tsunagi Town.

“ Tatzu Butzu ( 達仏 )” is an artwork created by Tatzu Nishino ( 西野達 ) who is a world famous artist. It consists of 33 Buddha statues which were curved in woods. In Buddhism, 33 is considered to be a sacred number. You can find them in Stone Spirit Forest ( 石霊の森, Sekirei no Mori ) in Tsunagi Town. Since 1980′, Tsunigi town has promoted the city as Town of Mountains and Sculptures and Tatzu Butzu was one of its projects. It is a small forest and the more you get used to the sight, the more you will find the statues.

As moving forward from Tatzu Butzu, you’ll see huge stones. This is another work of art “ Beyond the Epilogue “.

When you walk by the stones, you will hear someone speaking. They play stories written by Michiko Ishimure ( 石牟礼道子 ) who was a writer and had worked hard for documenting stories of victims of Minamata disease (details about Minamata disease is written below).

Any season is beautiful in the forest but autumn would be the best time to visit. There are a lot of ginkgo trees so you will see beautiful yellow carpet (those photos were taken in the middle of November).

Promoting Tsunagi Town as “ Town with Mountains and Sculptures ”

It is located in the southern Kumamoto and stands next to Minamata City ( 水俣市 ) which drew attention for Minamata disease. Minamata disease was caused by pollution. Chisso, a chemical company in Minamata, used to discharge waste water which included mercury to Minamata Bay. Back then, fishing was the main industry in the area so people ate fish which contains mercury. It is a dark history which was cased by the high economic growth after the World War II. As described in a film MINAMATA which was starred by Jonny Depp and released in 2020, people who suffered from the disease had to live with aftereffect for the rest of their lives. Minamata disease had drew attention not only in Japan, but also from overseas. Even though decades have passed, people,  who have aftereffect and also those who have not been certified as patients of Minamata disease called by pollution, have been fighting for their human dignity.

Because Tsunagi Town is located by Minamata City, many locals were also affected by the disease in the past. Since 1980’s, the town has tried to heal the people and also revitalize the town by placing works of art all around the town. Tsunagi town itself is a big museum now.

It is a local train company which runs from Yatsushiro to Sendai, Kagoshima Pref. They run along the west coast of Kyushu so we can see the great view from the train windows. There are many small but attractive stations to stop by.  Hisatsu Orange Railways was established as the third sector company and because of their background, we can see some unusual things, such as diesel trains with overhead wiring. Check out the article below and get to know about Hisatsu Orange Train. Highly recommended!

Visit Stone Spirit Forest and listen to stories of people

Tsunagi Town is a small town, so you can enjoy exploring there easily. It is about 2km from Tsunagi St. to Stone Spirit Forest. It will be a nice stroll seeing both mountains and the sea.

※ You can park at Tsunagi town office ( 津奈木町役場 )

TSUNAGI ART MUSEUM (It is 1.5km from Tsunagi St.)

TSUNAGI NO NEKKO ( つなぎの根っこ, ROOTS OF TSUNAGI ), ONE OF THE ART PROJECTS IN TSUNAGI TOWN ( 津奈木町 )