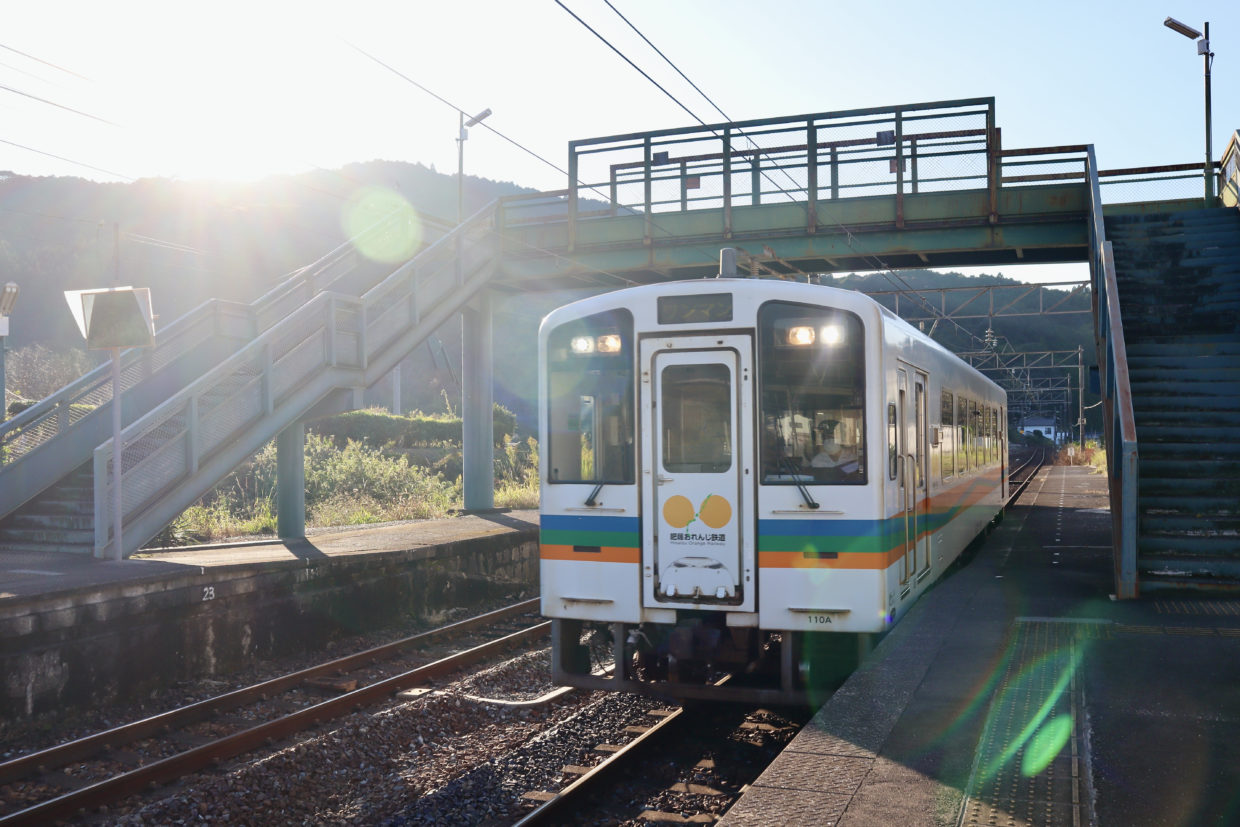 I joined one footpath event this spring and since then I have just been into it. Luckily I have met very kind and fun footpath companies who are from all walks of life. Everyone has each area of interest so I always enjoy talking with them.

In Kumamoto, there are several footpath organizations, such as in Yamato town, Misato town, Ashikita town, etc. They usually have events in spring and autumn so I booked ones every weekend in this October.

In those events, Ashikita footpath group collaborated with Hisatsu Orange Railway（肥薩おれんじ鉄道) to promote the popularity of the railway. It was such a great opportunity for me to realize the charms of the trains and the lovely countryside in southern part of Kumamoto.

Kagoshima honsen line ( 鹿児島本線 ) used to be running from Fukuoka to Kagoshima. In March 2011, JR Kyushu Shinkansen had opened and connected all the way from Fukuoka to Kagoshima. JR Kyushu closed Kagoshima honsen line only from Yatsushiro to Sendai because of the decreased number of passengers. Accordingly, Hisatsu Orange Railway had been established to keep running business between the section.

Hisatsu Orange Railway took a business system called “ the third sector ”, which local companies and government invest. In their case, Kumamoto Prefecture, Kagoshima Prefecture and some local governments along the trail tracks invested in jointly. Hisatsu Orange Railways was established on March 13th in 2004. It was the day when Kyushu Shinkansen had opened from Shin-Yatsushiro to Kagoshima-chuo.

The name “ Hisatsu Orange Railway ( 肥薩おれんじ鉄道 ) ” includes some meanings. Kumamoto used to be called as “ Higo ( 肥後 ) ” and Kagoshima used to be called as “ Satsuma ( 薩摩 ) ” in the past. The railway stretches from Kumamoto to Kagoshima so they took one letter from their old names. The railway runs along the coast and these areas are famous for several kinds of oranges so they also include it to their name.

If you are a train buff, you will soon notice that something is unusual at stations as it supposed to be. Even though you can see overhead wiring, trains are diesel.

Do they not use the overhead wiring anymore? Yes, they are still using them for cargo trains of JR Kyushu. The trains used to run on Kagoshima honsen line. Even though JR Kyushu Railway withdrew, they have to use Orange Railways’ tracks as cargo trains cannot run on Shinkansen railroad line.

They have 19 diesel trains and 15 of them are common use for passengers, 2 of them are for events and another 2 of them are Orange Shokudo ( おれんじ食堂, Orange restaurant ).

What is famous for Orange railway is the view of sunset. It is also called “ Sunset Liner ”. Trains run along Kyushu west coast. You will enjoy both mountains and the sea.

I haven’t been to all the station yet but I will introduce the lovely scenery here. I hope you will feel like you are traveling with me.

Hisatsu Orange Railways released one-day free pass ( 期間限定1dayのれる切符 ) this July. It costs 1,500 yen for an adult and 750 yen for a child and over 65 years old.

Kumamoto and other parts of Kyushu were severely damaged by the storm disaster July 2020. Because of the heavy rain, some parts of train tracks were damaged. Moreover, the pandemic has had great impact on tourism industry. They decided to release the discounted tickets to promote the use of their trains and let us have an opportunity to travel somewhere close to our neighborhood.

Orange Shokudo is a sightseeing train where we can have a nice course meal and enjoy the lovely local scenery.

They run it only Saturday, Sunday and national holiday and you need to book in advance. There are tables, counter seats and semi-private tables. They decorate the train with seasonal flowers and traditional crafts from both Kumamoto and Kagoshima. When you take Orange Shokudo, you will feel like a real restaurant. They offer course menus using local ingredients cooked by local chefs.

You can enjoy not only nice food and the lovely scenery. They slow down at some points where you can see the great view. They also stop at several stations so that you can take a walk on a beach and explore a retro town.

Set in a film in Hisatsu Orange Railway

Hisatsu Orange Railway became popular nationwide after a film was revealed in 2018 which was set in the railway. The title is “ かぞくいろーRAILWAYS わたしたちの出発ー ( Kazokuiro – Railways Watashitachi no Shuppatsu – ) ”and it is a human drama.

Akira Okuzono starred by Kasumi Arimura, who is one of the popular actresses in Japan, was living happily with his husband Shuhei and his son Shunya by a former marriage. One day Akira lost her husband all of a sudden. She was desperate and had no where to go. Akira and Shunya ended up visiting Shuhei’s father Setsuo. Setsuo lives in Kagoshima and works for Hisatsu Orange Railway as a train operator. Setsuo had lost contact with his son for a long time and never met Akira and Shunya so he got confused at first. Setsuo had lost his wife decades ago and had had a lonely life. Setsuo decided to have them live with him as they had no where to go. Akira was looking for a job so she decided to take a job interview of Orange Railway. Being a train operator was actually her deceased husband’s dream when he was a little boy.

In Japan, “ 聖地巡礼 ( Seichi Junrei ) “ is famous for fans of anime, movies, etc.  Seichi Junrei is translated as “ pilgrimage ” and often used among “オタク( Otaku or nerd )”. It has been popular to visit places which were depicted in anime or manga.

At some stations of Orange Railway, we can see panels which explain about scenes which were filmed at Yatsushiro, Minamata, Izumi, Akune, Ushinohama and Satsuma-Okawa.

There is one train which has a decoration and explanation about the film inside the train. If you are lucky, you may come across it. Orange Railway offers a filming location map. You will have another fun trip with the map.

Have a nice train trip with Hisatsu Orange Railway!

Thanks to Kyushu Shinkansen, we can go to Kagoshima-chuo from Shin- Yatsushiro for less than an hour but cannot expect good view. On the other hand, if you use Hisatsu Orange Railway, it takes more than twice only from Yatsushiro to Sendai but you will have a nice view with both sea and mountains.

It was such a great opportunity for me to realize the charms of travel trip and also get to know southern Kumamoto more. I have visited Tsunagi, Minamata and Ashikita so I will introduce another attractive places in those areas.

Take a train and drop on and off at some station and walk around the area. I hope you will feel closer to the local Kumamoto and enjoy your trip to Kumamoto at most.