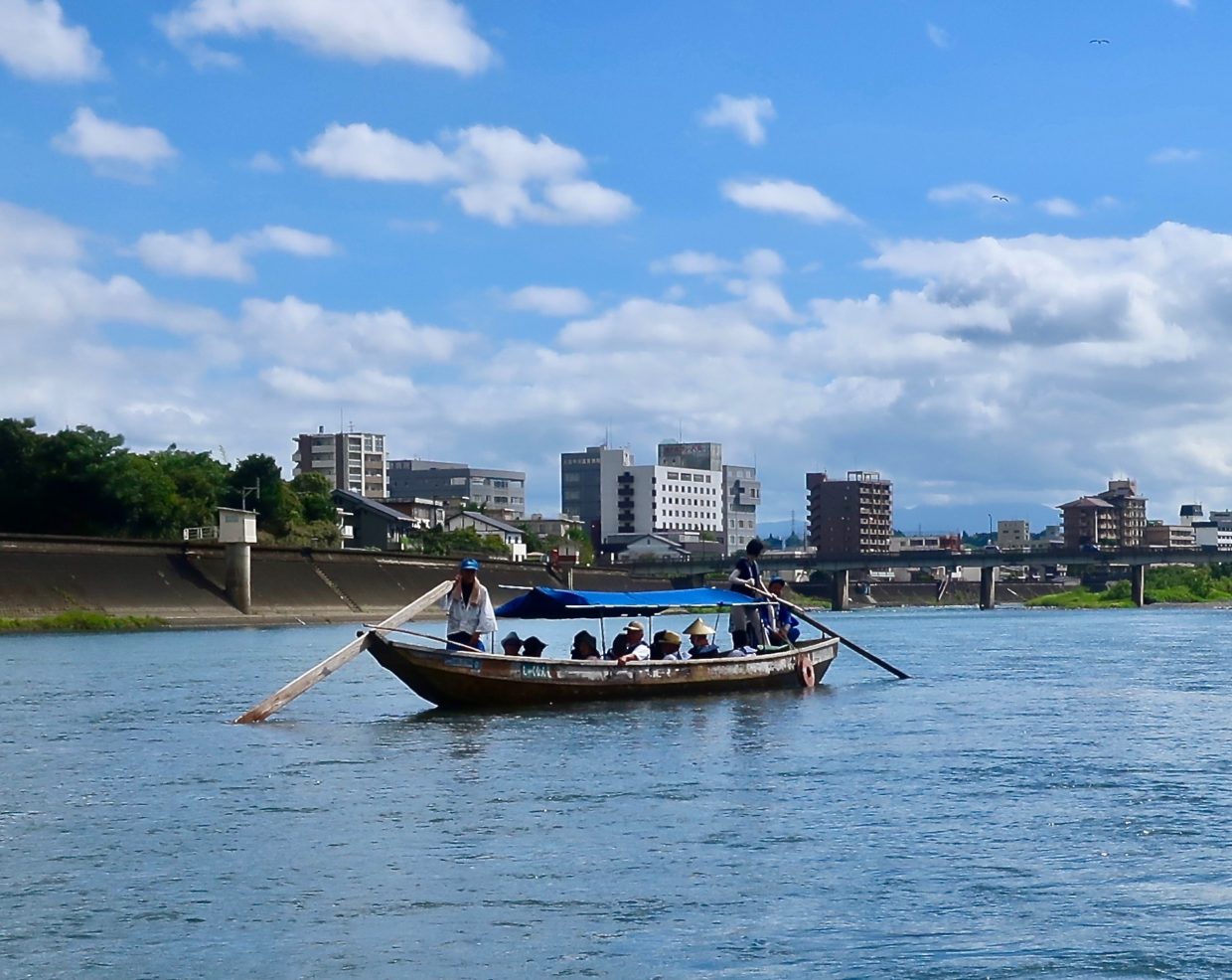 It is at the beginning of October but how is the weather in your place? In Kumamoto, it is still hot during daytime(The temperature goes up to around 30C!) and will be like this a few more weeks.

Kumamoto is called as “火の国(Hi no kuni, means country of fire)” and there are some reason for this.

Some say that it came from our mythology and some say it is because of the hotness of summer in Kumamoto.

As I shared in the previous article about 鍋ヶ滝(Nabegataki waterfall), we can feel 涼(Ryo, means coolness) by hearing the sound of water or seeing something is wet.

This is the idea from the traditional tea ceremony. In the past, clean water was very valuable so the sound of water or the look of water was luxury and it was a real おもてなし(Omotenashi, means hospitality).

This time, I introduce to you this fun activity, “球磨川下り(Kuma river boat cruise)” in Hitoyoshi, Kumamoto. My friends and I joined it last summer and it was amazing.

Let’s see how it was and hope I can create nice 涼(ryo, coolness) in your mind after reading it.

When it comes to the sightseeing in Hitoyoshi, Kuma River boat cruise is a must-try activity.

Kuma river is classified as a class A river in Japan and the largest in Kumamoto. Also it’s one of the fastest-flowing river in Japan as well as 最上川(Mogami river) and 富士川(Fuji river) . It is also famous for rafting.

The wooden boat can have about 15 people.

Of course there is no engine on a boat so they handle a boat with their amazing skill.

Kuma River boat cruise has more than 100 years of history and this travel became possible in 1664.

林正盛(Masamori Hayashi), who was a merchant in Hitoyoshi, involved in the civil work to remove huge rocks in some parts of Kuma River. It was a very hard work but thanks for this, people could use Kuma River cruise to transport people and products.

After opening the railway service between Hitoyoshi and Yatsushiro, the Kuma River cruise shifted to sightseeing usage.

For the long history of Kuma river cruise, there were some famous people who got on the cruise.

During 西南戦争(Seinan sensou, means Seinai civil war which happened in 19th centry), 西郷隆盛(Takamori Saigou) who was the leader of the war used it to go into Kumamoto from Kagoshima with weapons and bullets.

Also 与謝野晶子(Akiko Yosano), who was a writer and a poet in 19th to 20th century, enjoyed the cruise with her husband.

Kuma River boat cruise has shown passengers the great seasonal changes and made their trip unforgettable.

We joined the Kuma River boat cruise last August while we were traveling around Hitoyoshi(I’ll introduce you more about Hitoyoshi later!).

Another articles about Hitoyoshi

KANOME WATERFALL(鹿の目の滝) ~ONE OF THE BEST 100 WATERFALLS AND CONSISTS OF 3 KINDS OF WATERFALLS, HITOYOSHI KUMAMOTO~

There will be some more articles about Hitoyoshi later!

Basically, there is one course for the boat cruise which is Seiryu course(清流コース). This course is 50 minutes cruise and you can enjoy the relaxing cruise with the great scenery.


There is another course which is Kotatsu boat(こたつ舟コース) which is limited from December to February.

Kotatsu is a table with an electric heater attached to the underside of the table.

You can put your feet into Kotatsu on the boat and enjoy food and Kuma shochu(distilled sprit).

This Kotatsu course is chartered so you need to book in advance. (I haven’t experienced but it must be so nice!)

This time, we tried Seiryu course.

You don’t need to book but because the capacity is limited, it’s better to book through the company’s website or phone.

First, we went to the boarding point. You can park your car there and when you finish the cruise, the free shuttle bus will take you back there.

You should arrive at least 20 minutes earlier and they will give an instruction before boarding, such as how to wear a lifejacket.

As I said, there are two men rowing a boat at the front and at the back.

We sat at the backside and we talked to the boatman.

He was such a fun man! Boatmen are great entertainers.

Can you see a man in the river?

There were some people in the river and I was so surprised!! The boatman said that they were fishing 鮎(Ayu, means sweetfish)!

Can you see the painting on the wall inside of the bridge? It’s sweetfish.

We pass by Hitoyoshi Castle Ruin. You can see the beautiful stone wall.


After a while, the boatman offered us to try rowing the boat. We tried but it was so difficult especially to hold the rudder steadily because it’s heavy and unstable on the boat.

Anyway, the boatman who was rowing at the front took all the control so even though I was so terrible at rowing, the boat moved forward.

Actually, one of my friends wanted to try this rafting but others(including me) were reluctant to because we were so intimidated!

If you’re the active type of person, try the while-water rafting!

I can’t say how it is to you but I’ve read many comments which sound so fun to try white-water rafting and how they were satisfied with it with good guides.

After rafting, we can get free Onsen ticket at 一勝地温泉かわせみ(Isshouchi Onsen Kawasemi). You’ll be relaxed in the nice hot spring bath.

Enjoy Kuma river boat cruise and Hitoyoshi at most!

When you go to Hitoyoshi, you can’t miss Kuma River boat cruise.

Enjoy the cruise with entertaining boatmen. I’m sure you’ll be amused by the great Kuma river!

MAP of the boarding point