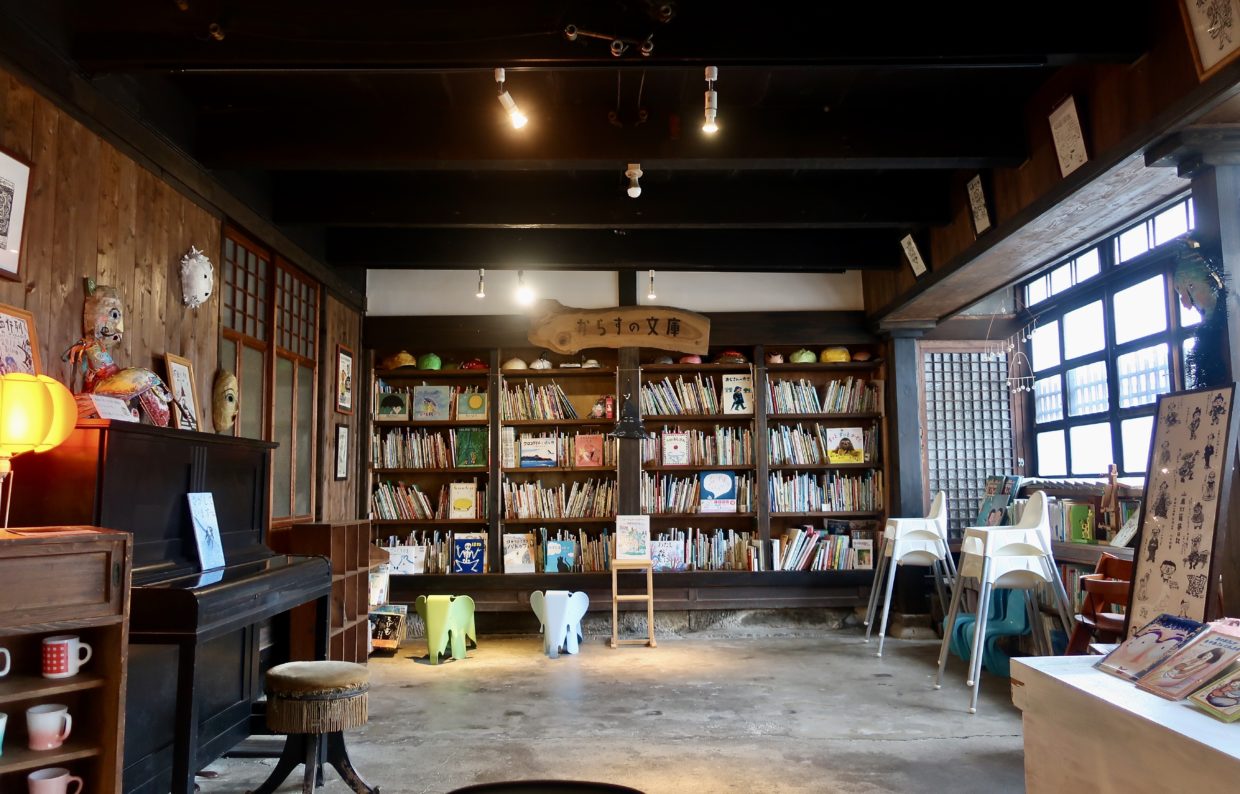 When it rains, how do you enjoy your day? Previously, I didn’t like rainy days because it is depressing and I even thought it ruined my day. But recently, I started to like them as I found myself more relaxing and enjoy writing, reading and having a nice nap.

At the end of July, my friend and I visited Yamaga City to stay at one ryokan (Japanese style hotel) using “Go To Travel Campaign”, which is a new policy to enhance people to use hotels by offering discount. It has been a controversy policy but I personally support it as long as we use local hotels because I believe locals should support local economy. It was raining very heavily but we could enjoy driving and the temperature was comfortable.

Today, I’d like to introduce to you a lovely cafe “METRO CAFE” in Yamaga City. It stands in a lovely retro area and you can take a walk and enjoy finding small shops along the street.

METRO CAFE opened in 2012. I will talk about it later but there are sake brewer houses behind the cafe. The sake brewer opened in 1830 and closed their business in 1974. The building that METRO CAFE is in used to be used as a shop and living space for the family who owned the brewer.

When you walk from the parking lot, you will see many retro buildings along the street.

This road is called 豊前街道 (Buzen-kaido road). Buzen-kaido road starts from Kumamoto City, passes by Yamaga City and extends until Kokura (Fukuoka Prefecture). In Edo Period (17-19th century), this road was used for 参勤交代 (Sankin-kotai). Sankin-kotai was an obligation for all federal lords around Japan to go to Tokyo bringing their local specialities and grand them to Tokugawa Shogunate which had ruled Japan at that time.

⬇️ If you want to know more about Sankin-kotai, check the article below!

Originally, Yamaga is famous for a very good quality of Onsen (hot spring) so there used to be many hotels, hot springs and restaurants. Yamaga had flourished and we can still see some old buildings along the street.

This is METRO CAFE. As I shared, this building used to be a shop and they remain the old signboard. “天聽 (Tencho)”, which was one of their sake brands.

What attracts you first may be the book shelves with full of books! I heard that there are almost 2,000 books and you can relax and enjoy reading books at your favorite seat.

In their official website, they say “please visit us on a rainy day to relax and find a book you enjoy.”. They also say that they want to be like your “おかあさん (Okaasan, mother)”. They want to offer you a warm place where you can feel totally relaxed and enjoy healthy fresh food even on a bad day.

On that day, my friend ordered burrito and I ordered a cheesecake and iced green tea soy latte (I already had lunch!).

Everything was very fresh and I especially enjoyed the soy green latte. There are many kinds of drinks and most of them are organic or local product. They use seasonal locally grown vegetables.

At the cafe, you can see some local traditional craftwork, such as 来民うちわ (Kutami Uchiwa) means a paper fan made in Kutami.

It is said that one Buddhist priest had brought it from 四国 (Shikoku). In Yamaga area, there are plenty of 和紙 (washi, Japanese traditional paper) and bamboo so paper fans were produced widely. One characteristic of Kutami Uchiwa is that they attach 柿渋(kaki-shibu, persimmon tannin juice) for enhancing the strength of a fan and making it strong against insect damage.

Kutami Uchiwa fan is made only in the area called “来民 (Kutami)” in Yamaga City. “来 (ku)” means come and “民 (tami)” means people so it is believed that they will bring you good luck for business. People used to give it to business people as a gift. There are several kinds of Kutami Uchiwa in METRO CAFE so pick up and take a look at traditional craftwork!

After having a relaxing time at METRO CAFE, explore the old sake brewer behind it.

I’m going to share its history briefly, There used to be 吉田酒造 (Yoshida shuzo, Yoshida Sake Brewery). They started their business in 1830. The third-generation 吉田藤吉 (Tokichi Yoshida) was very passionate about brewing. From 1905, he offered his products to the Imperial Family every year and they were praised highly.

During the World War II, Yoshida brewery was forced to close their business temporarily and the military used their facilities as storages for food for soldiers and grass for military horses. After the war, they restarted their business. However, gradually the demand of sake had dropped and they stopped producing sake in 1974. After that, one sake brewery company named, 千代の園酒造 (Chiyo-no-sono Sake Brewery) in Yamaga City took over their business and kept making Tencho, which represents Yoshida Sake Brewery. Even though Yoshida Sake Brewery stopped making sake, they sold their products at that shop which is now used as METRO CAFE. In 1986, they closed their retail business. After that, they repaired the houses and now they are used as event venue.

Now, let’s explore the houses. Passing through the door of the cafe, you will see the well and other four houses.

As this English sign says there are four houses, which are O-kura (brewing main house), Fune-kura (filtering house), Higashi-kura (bottling house) and Naka-kura and Moto-kura (storage houses). They were built from the end of 19th to the beginning of 20th century.

At Fune-kura, you can see sake filter.

You can go to the second floor and see some photos of Yoshida family who owned the brewery.

There are many paintings by 鶴田一郎 (Ichiro Tsuruta) who is a painter and from Amakusa, Kumamoto. Yamaga City is famous for 灯籠祭り(Toro-matsuri, lantern festival) and he presented women from the festival.

Take your time and enjoy exploring around the houses!

What else can we enjoy near METRO CAFE?

Yamaga area has been famous for the good onsen (hot spring) and you can’t miss さくら湯 (Sakura-yu, Sakura hot spring). Sakura-yu was built about 370 years ago as a private bath for the Hosokawa Family which ruled Kumamoto at that time. In 明治時代(Meiji period, 19-20th century), it was converted to a public bath.

If you want to experience hot spring casually, why not trying “足湯(Ashi-yu, foot bath)”. You can enjoy foot bath at Yunobashi Park (湯の端公園) which stands in front of Sakura-yu. According to the sign, the temperature of the water is 35.9℃ and this is categorized to alkaline simple hot spring which we can expect to ease neuralgia, muscle pain, joint pain etc. Pebbles are spread at the bottom so walking on them gives nice massage to our sole.

Check the previous article below and get to know more about both hot springs and more!

Every February, there is a festival called, 山鹿灯籠浪漫百華百彩(Yamaga Tourou Roman Hyakka Hyakusai) around Sakuya-yu. You will be amazed by the beauty presented by lighted paper umbrellas and lanterns along the streets. Highly recommended!

If you are interested in temples and history, I recommend you to visit 日輪寺(Nichirin-ji Temple). It takes about 10 minutes by car from METRO CAFE.

Nichirin-ji Temple was established in 平安時代(Heian period, 8-12th century) as a temple of  天台宗(Tendai-shu) which is one of the sect of Buddhism and in 鎌倉時代(Kamakura period, 1185-1333), it was converted to 曹洞宗(Soutou-shu) which is one of the sect of 禅(Zen). What is the most famous about this temple is the Buddhist statue called, “おびんずるさま(Obinzuru-sama)” who is one of the disciple of 釈迦如来(Shakaryorai, means Gautama Buddha). You will be astonished the size of it! There is an interesting story about Nichirin-ji Temple which is related to 赤穂事件 (Akou jiken), one of the famous historical incidents and is often called as ‘忠臣蔵(Chushingura)’.

Check the article below and enjoy the beauty of the temple and the story about Chushingura!

If you want to see and feel Mother Nature, Fudo Rock is the place to visit! It takes about 20 minutes by car from METRO CAFE. There is a mountain called 蒲生山(Mt.Kamou) and we can see this 不動岩(Fudou Rock) which appears from the middle of Mt.Kamou. Fudou Rock is composed of gabbro which is over 500 million years old. In 平安時代(Heian period 8-12th century), many 山伏(Yamabushi, Buddhist monks who practice in mountains) stayed in Mt.Kamou to seek for spiritual enlightenment. The view from the observatory is amazing and if it’s sunny, you can capture 雲仙(Unzen, an island which is a part of Nagasaki). In this article below, I attached some videos which will show you how amazing Fudo Rock is. Check it and get to know more about Fudo Rock!

It has been such a long time since my friend and I visited Yamaga City. This situation that coronavirus has brought is very difficult for everyone but it has made me realize that how amazing our neighbor is. When we look at places in our neighbor, there are many places we haven’t visited or even don’t know. Introducing these places is my motivation to keep writing and this situation made me realized it again.

I’m sure it is very difficult to visit Yamaga City if you live in another prefecture or outside of Japan but it’d be great if you include these places into your travel bucket list.

You can park at 豊前街道駐車場 (Buzen-kaido Chusha-jo) which is about 100m away from METRO CAFE.