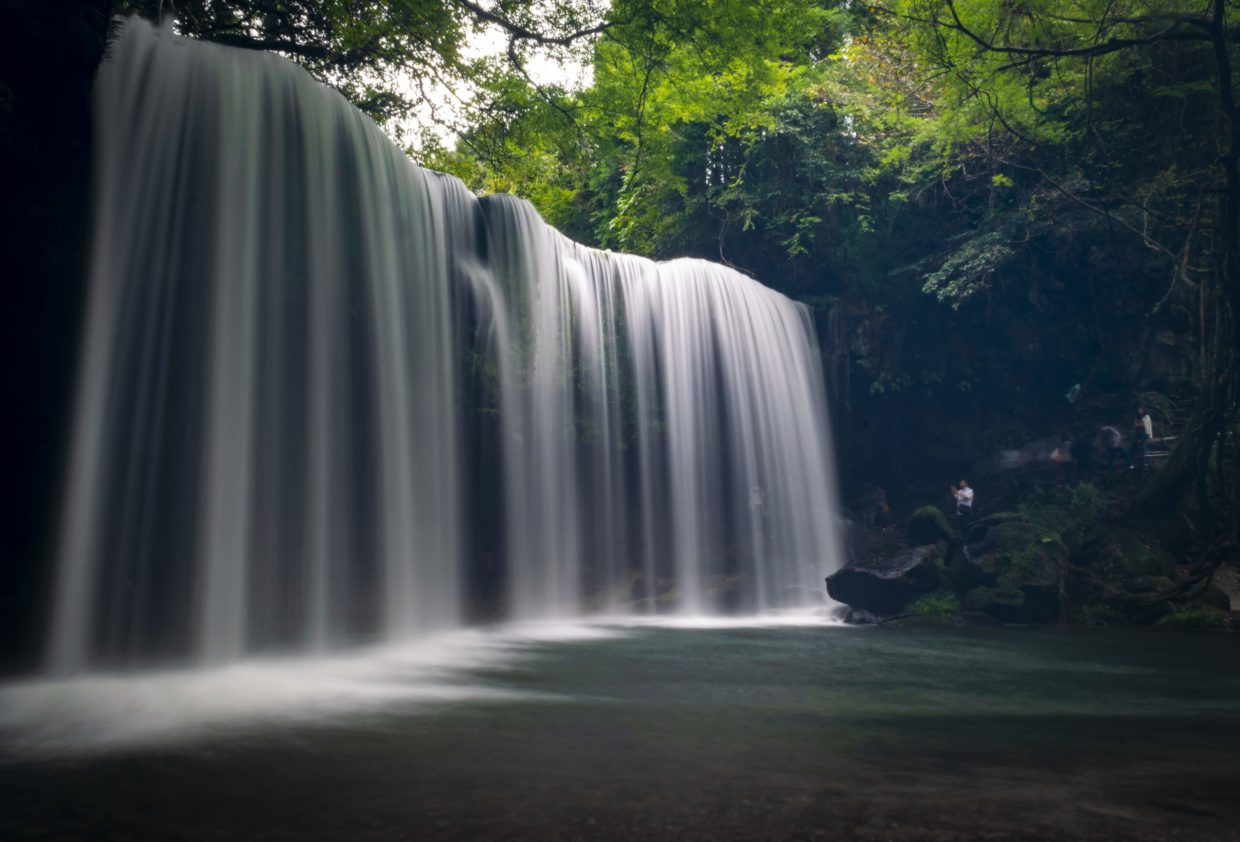 Have you heard of “涼(ryou, means coolness)” ?

Recently, I have started to join the tea ceremony.

When you enter a traditional tea room, you’ll see 掛け軸(Kakejiku) which means a hanging scroll. 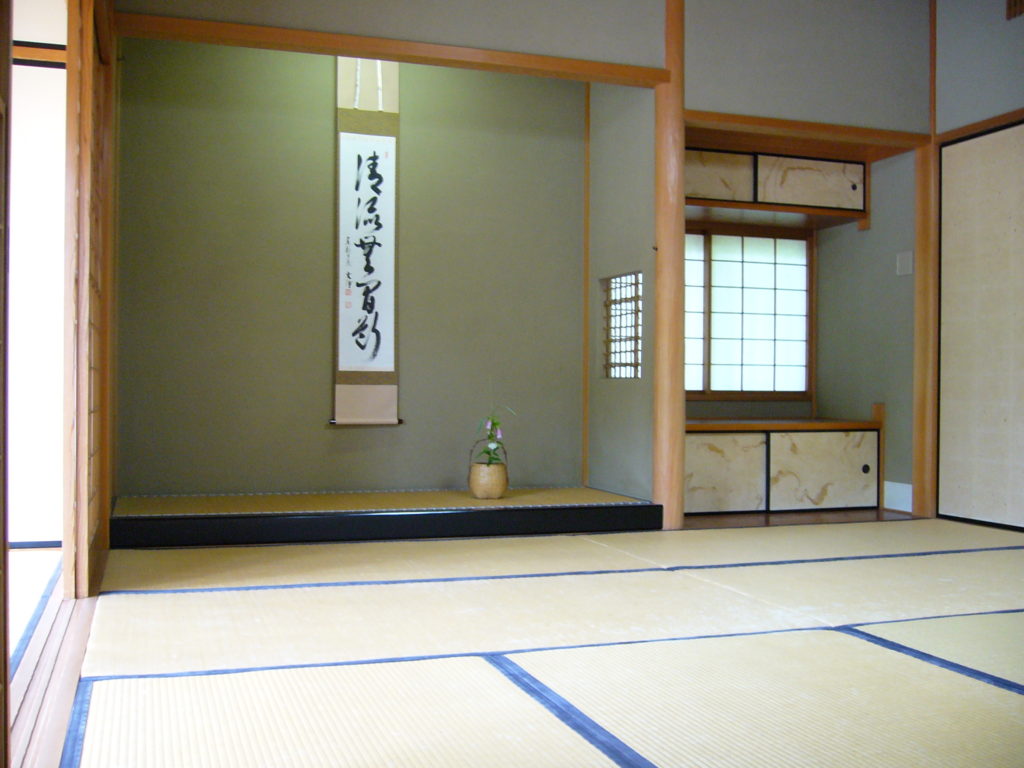 On the first day of the tea lesson, my teacher hung one kakejiku of 滝(taki, means waterfall). 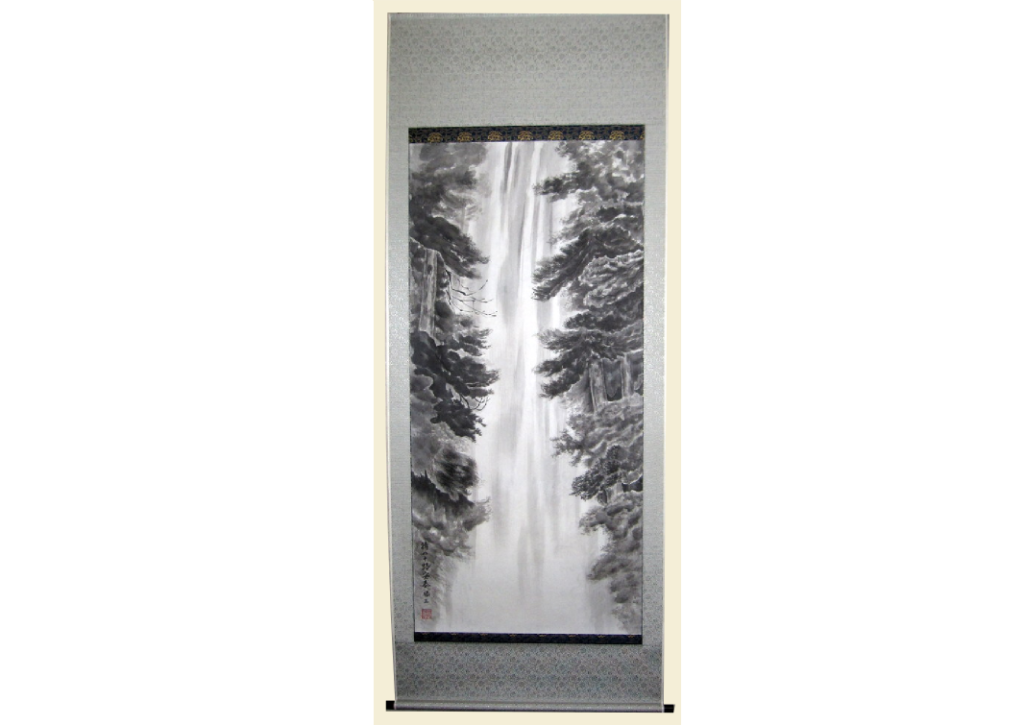 Waterfall kakejiku is popular during summer because guests can feel coolness by seeing it.

My teacher said she wanted to create “涼(ryou)” in the tea house for guests by showing seasonal kakejiku, potteries, sweets etc.

These are host’s hospitality.

It had become popular after being used for a green tea TV commercial and now many photographers visit there to take the best photo.

Let’s learn about Nabegataki waterfall and I hope I can give you 涼(ryo) to survive this hot summer.

鍋ヶ滝(Nabegataki waterfall) is in 小国町(Oguni town) which is in Aso county. 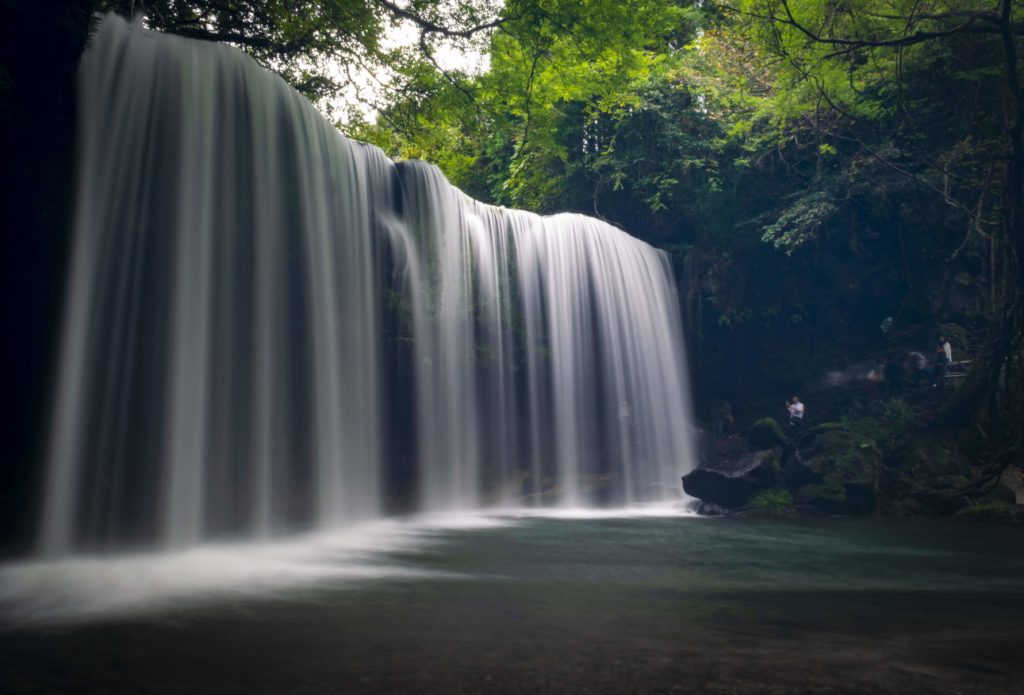 There is Aso Unesco Geo Park which consists of 33 geo sites and Nabegataki waterfall is one of them. 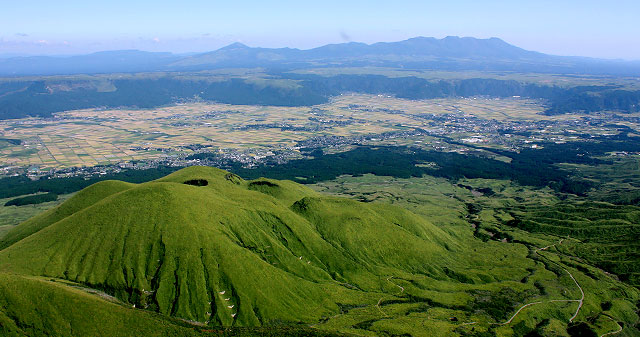 The width of the fall is about 20m and the hight is about 10m.

The most famous feature of Nabegataki is that we can see backside of the waterfall.

Because of this, it is also called “裏見の滝(Urami no taki, means waterfall that you can see the backside)” 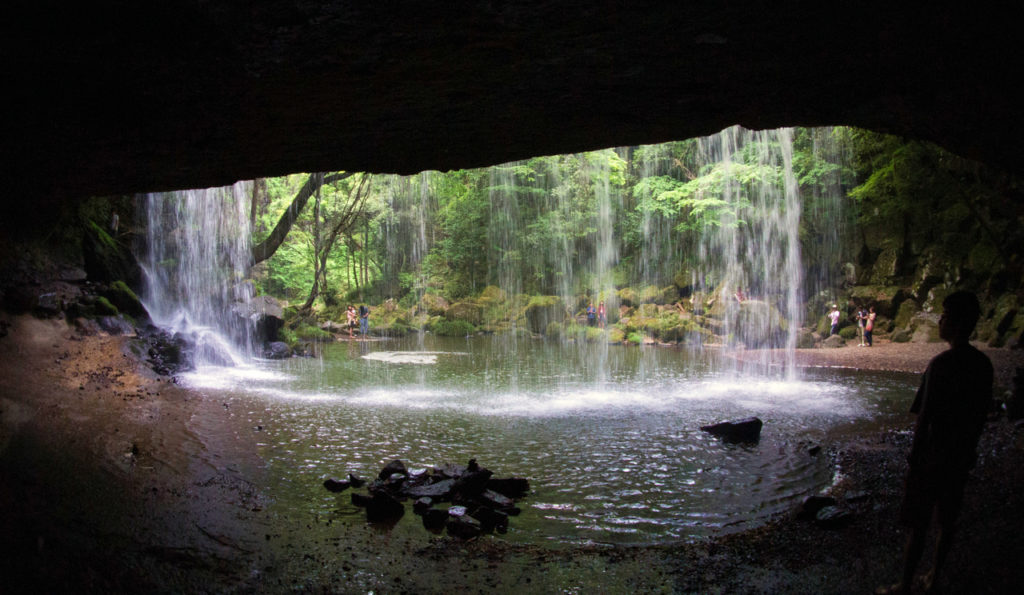 Water flows and falls above welded tuff which was formed 90,000 years back eruption of Mt. Aso.

Welded tuff is hard. There is softer stratum below it.

Over years, the soft part was shaved off by water and it has created the space back of the waterfall(the depth is about 10m). The space looks like a cave. 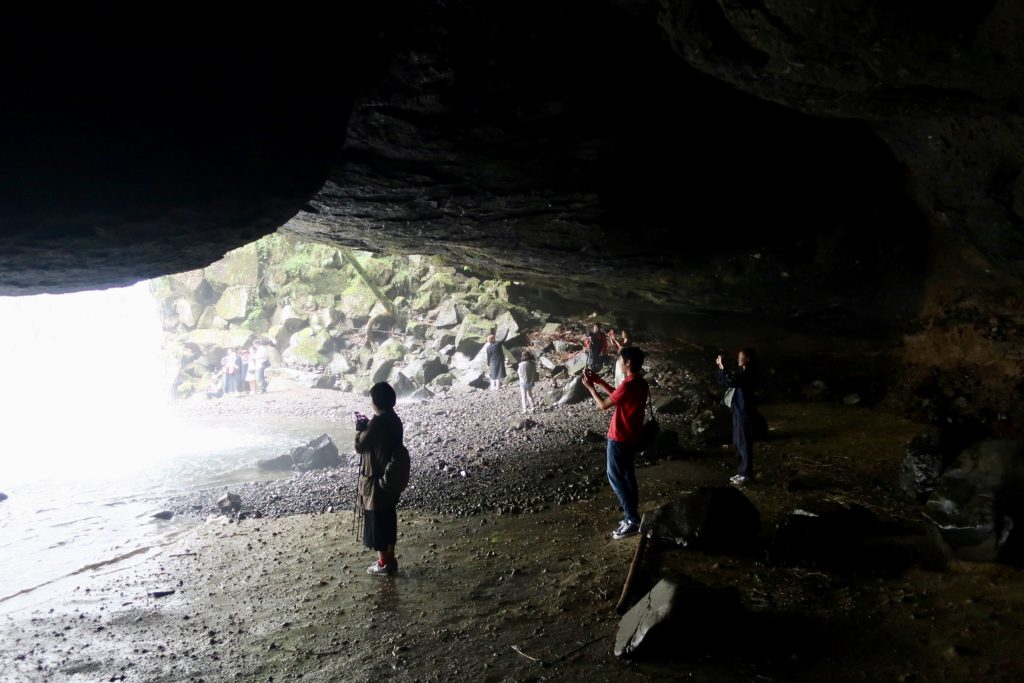 Nabegataki waterfall is one of the important place where we can see the great creation of mother nature.

※ ”Welded tuff” had already appeared in the last articles about stone bridges and Gorougatake waterfall. I think that the eruption of Mt. Aso have brought Kumamoto great nature and history.

Check the last articles, too!

Why did Nabegataki waterfall(鍋ヶ滝) become popular and have attracted us?

In 2003, a beverage company shot a TV commercial of green tea at Nabegataki waterfall.

松嶋菜々子(Nanako Matsushima), who is one of the famous actress in Japan, was in the video so Nabegataki waterfall became very popular.

Nabegataki waterfall is not big but because of the unique look, it has attracted us a lot.

Endless stream of water shows the looks like a curtain. 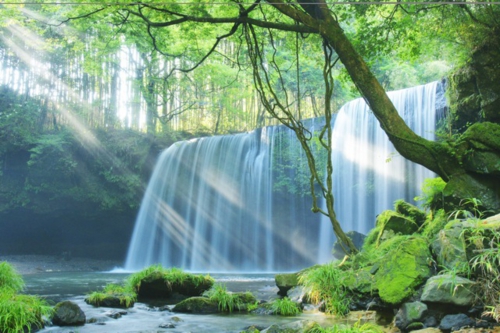 From the backside, you can hear the water falling sound and see the beautiful scenery. You will feel like you have come to a different world.

You can enjoy Nabegataki waterfall at any time of the year.

Spring to summer, you can enjoy fresh green and in autumn, you can cherish colored leaves.

During the first week of April, they light up the waterfall from the backside for several days. 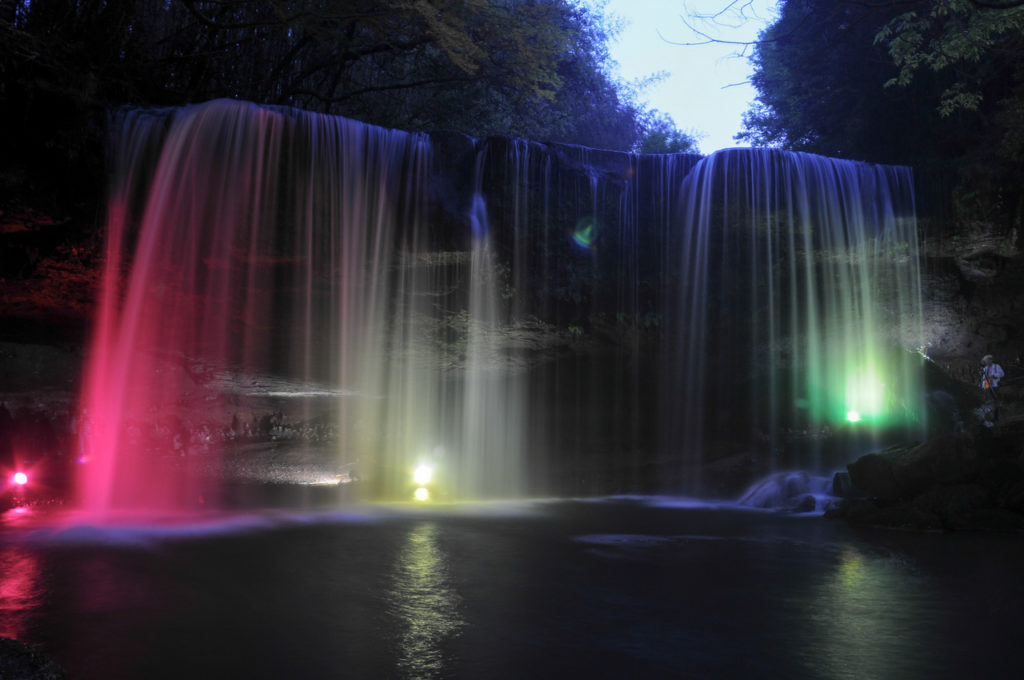 It is mystical and you can see it differently from daytime.

They have already announced the dates of the light-up for 2020, which is from 1st April to 6th April. They light up from 5pm to 9pm(On the last day, they light up until 8:30 pm).

They may change details so I recommend you to check the information again before you visit there.

Remember to bring nice shoes as the sight is not good than daytime and path is slippery.

My friends and I visited Nabegataki waterfall last September.

In September, it was still very hot in Kumamoto city but it was much cooler in Aso.

At first, we went to Mt. Aso to see sunrise. I woke up around 4 am and we arrived at the spot around 6am. 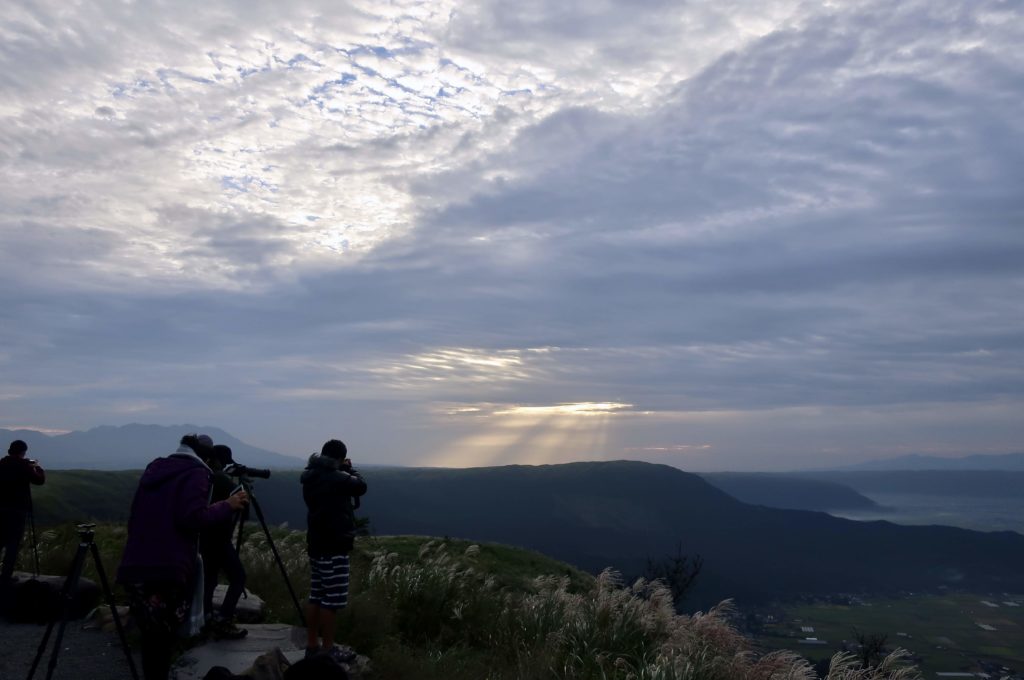 It was freezing but many people had already waited the moment.

The sunrise was beautiful and it was worth to get up very early! 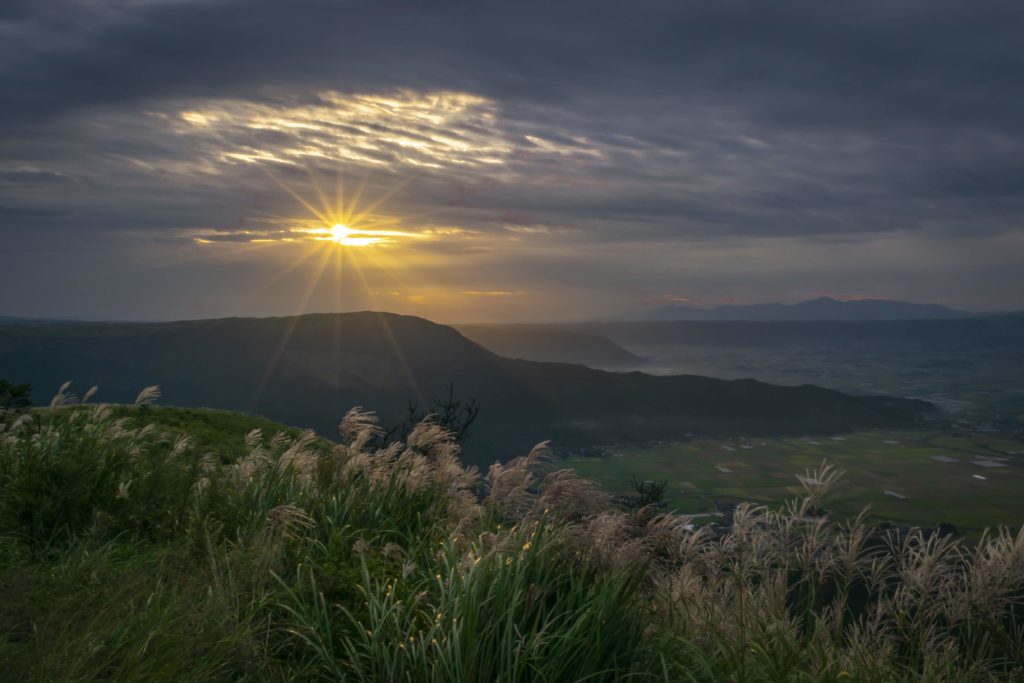 After that, we headed to Nabegataki.

The official website suggests us how to set our car navigation when going to Nabegataki.

There is 坂本善三美術館(Sakamoto Zenzou bijutsukan, means Sakamoto Zenzou musuem of Art) near Nabegataki. They recommend us to set the address of this museum, not setting “Nabegataki”. 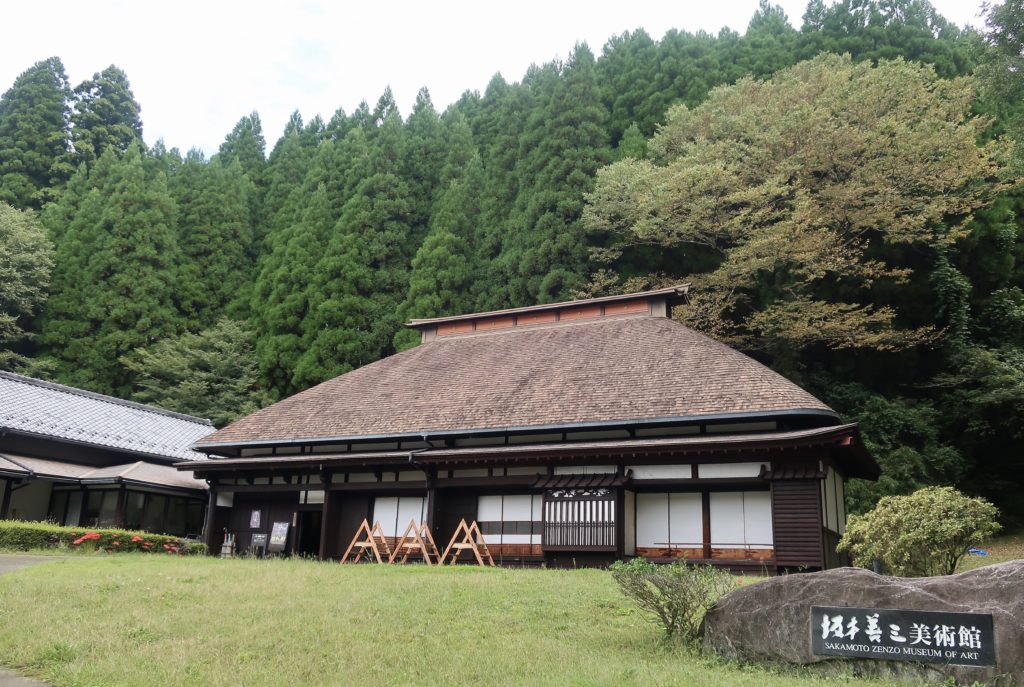 Once you arrive at the museum, you can just follow the sign and will arrive at Nabegataki after 2 minutes.

There is a parking lot near Nabegataki but because it’s not spacious.

During weekends and national holidays, they run shuttle buses to Nabegataki from 旧蓬萊小学校(Hourai elementary school which had been terminated) that locates between the museum and Nabegataki. 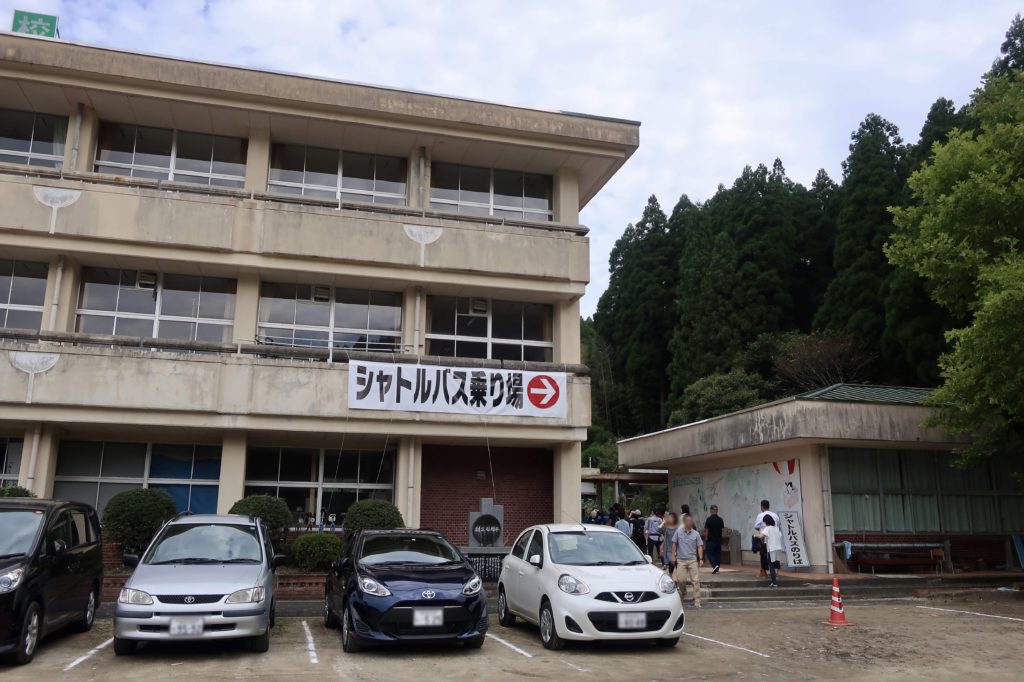 There are staffs guiding on the road so they show you where to park.

Since it was after harvest, farmers decorate their rice field putting カカシ(Kakashi, means scarecrows). On the way to Nabegataki, we could enjoy seeing them.

What a lovely hospitality! 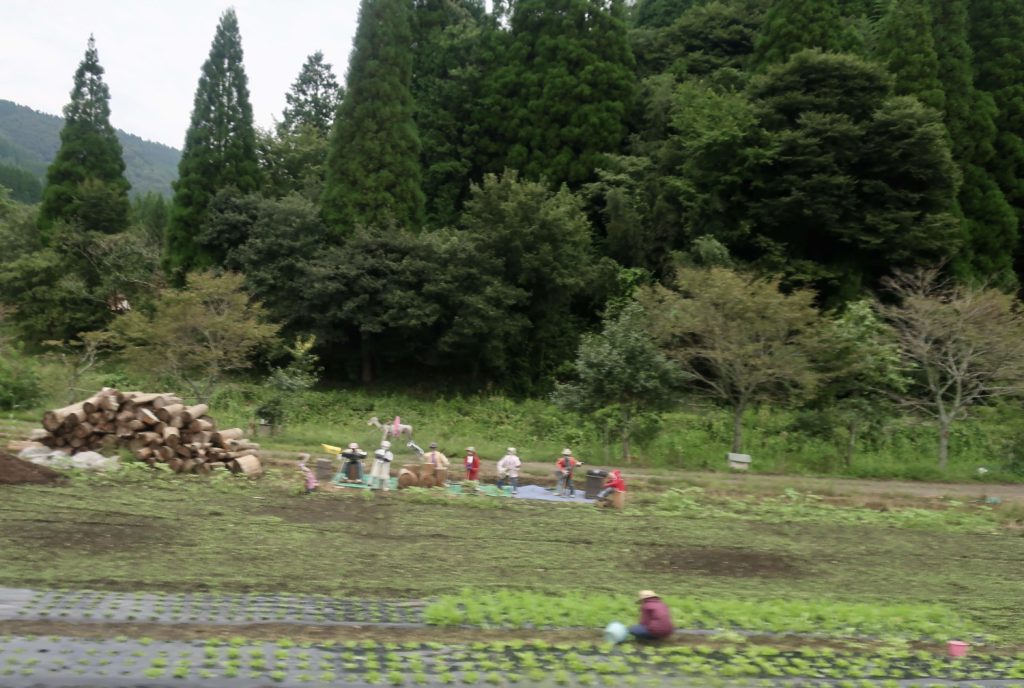 (Sorry the photo is so blur because we were on the bus!) 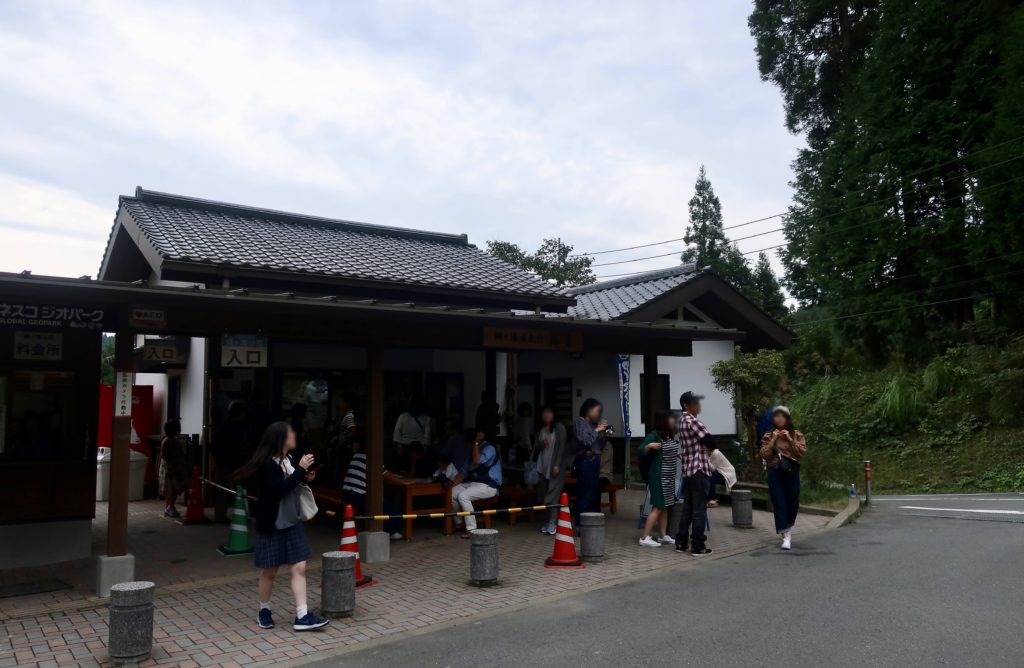 This is the entrance of Nabegataki.

You get on and off the shuttle bus there and pay the entrance fee. 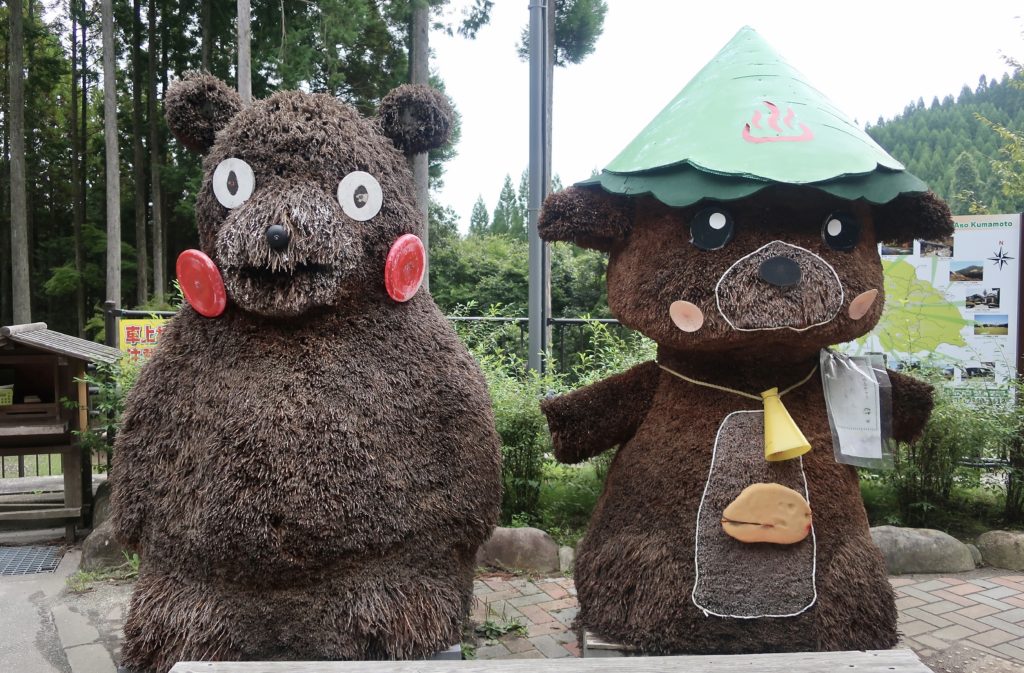 Going through the entrance, they will welcome you soon.

The left one is the famous くまモン(Kumamon, which is the local mascot of Kumamoto winning 2011 mascot championship in Japan!) .

The right one is おぐたん(Ogutan, which is the local mascot of Oguni-town). Ogutan is Jersey cow which is famous in Oguni-town. The green hat expresses Oguni cedar.

Kumamon and Ogutan usually look like this(because these ones in Nabegataki were made by plants so they look less cute…). 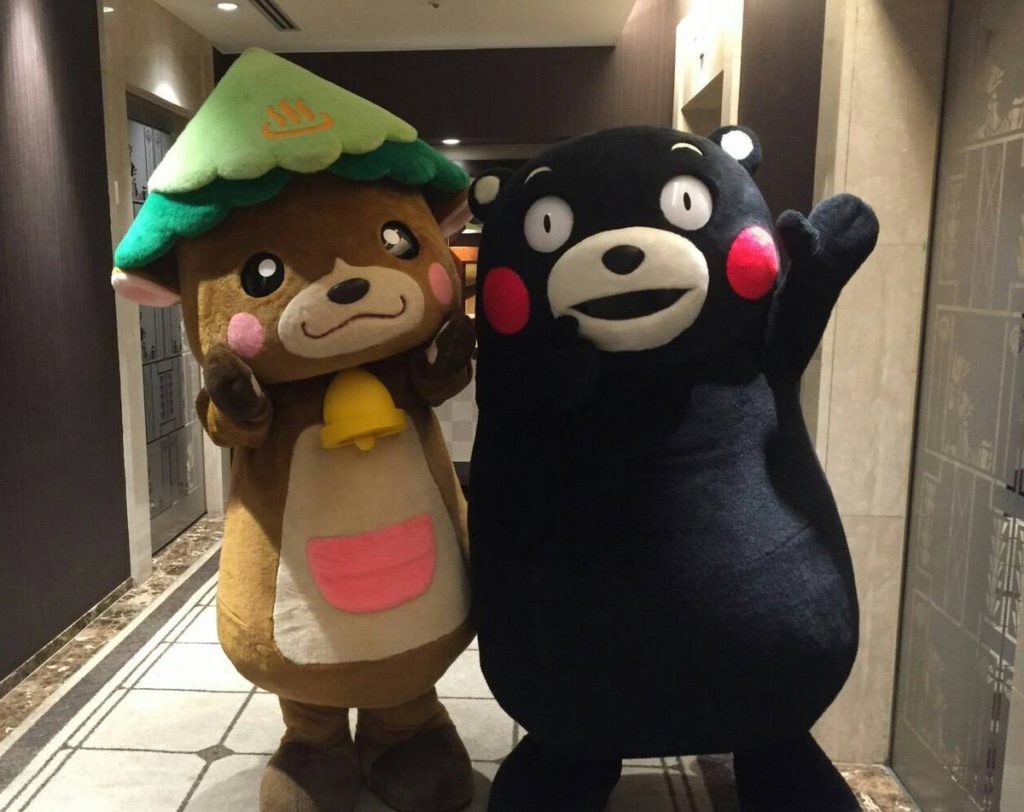 Walking along the path and we had arrived at Nabegataki waterfall. 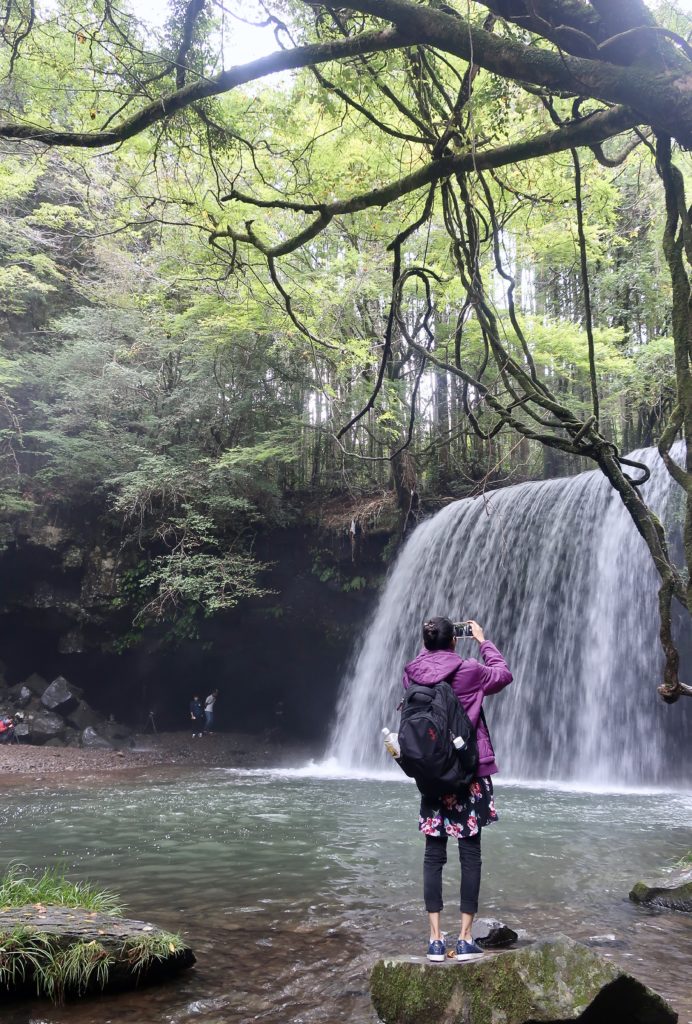 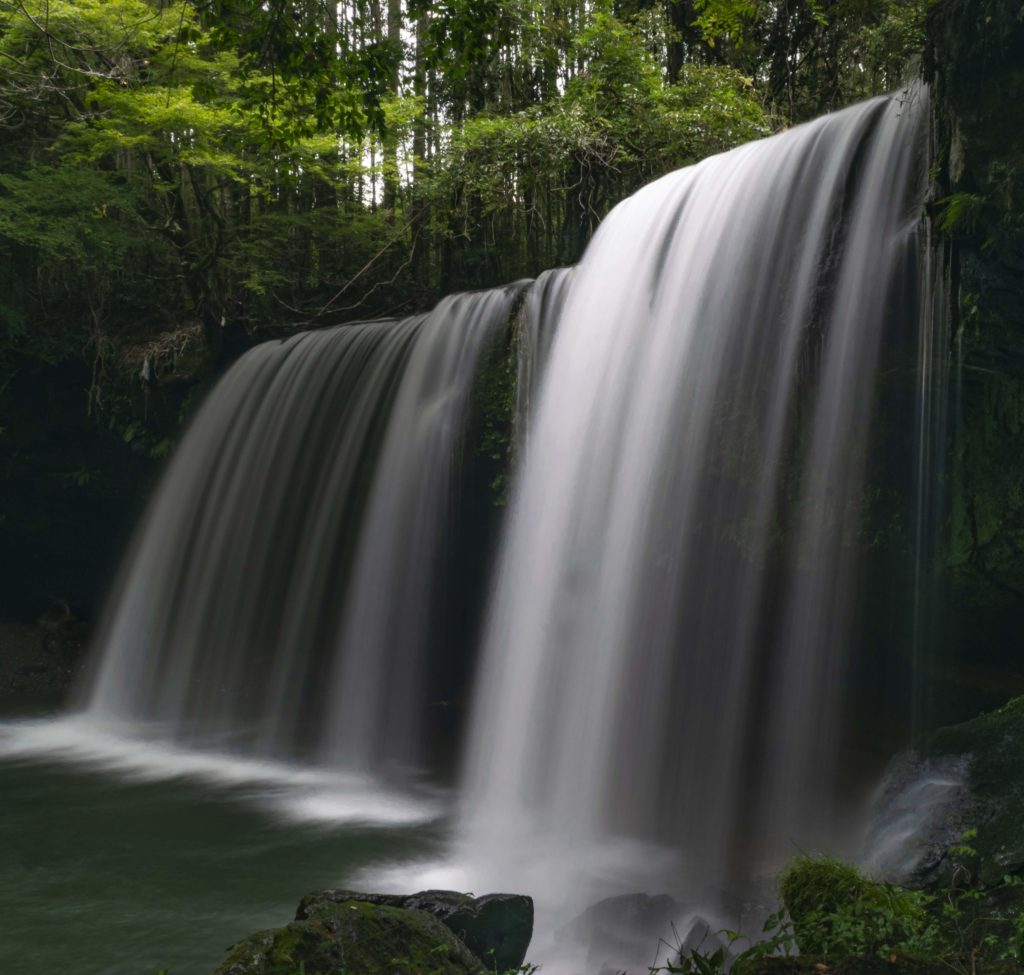 You’ll be attracted by this beautiful curtain look waterfall.

To go to the other side, you need to go through the backside of the waterfall.

It’s a great experience to walk behind the waterfall. 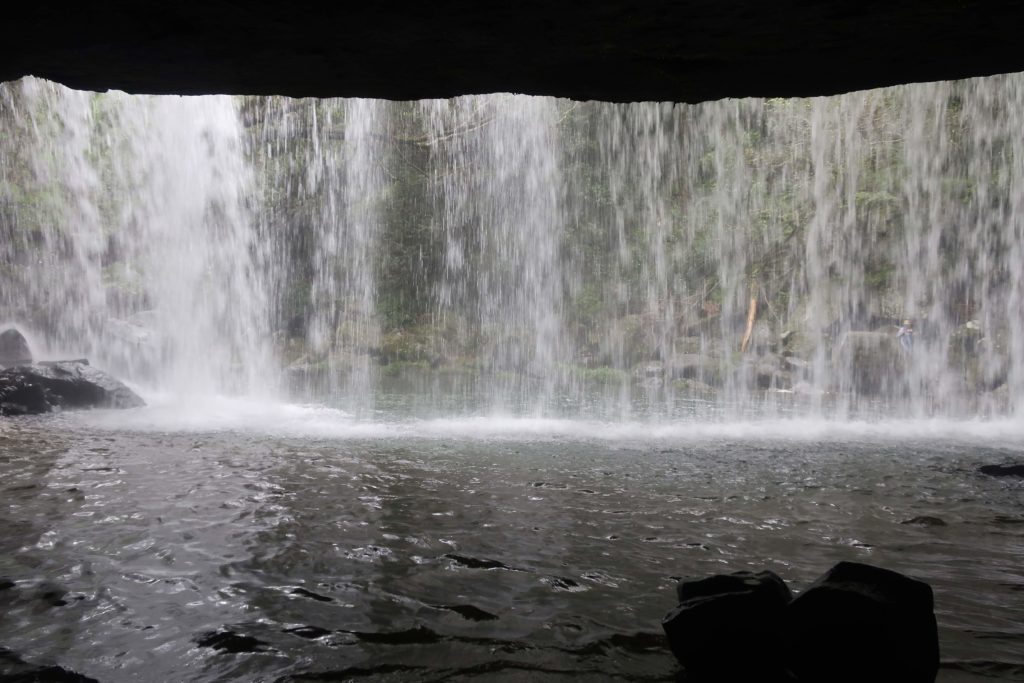 The water splashes so your hair will look like this… 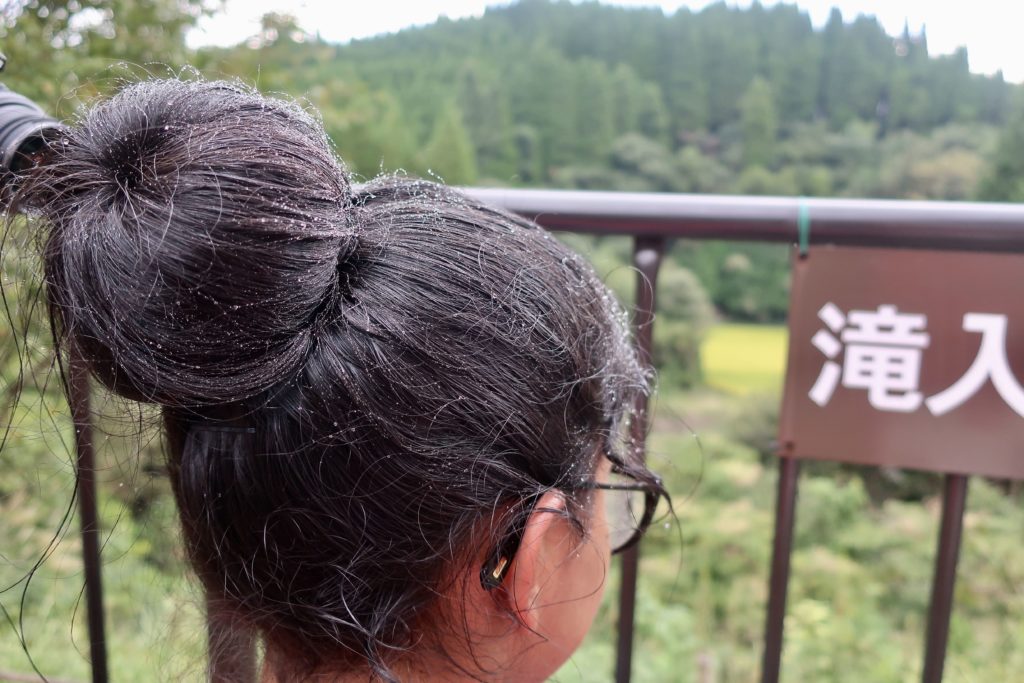 Zenzou Sakamoto is an artist who was from Oguni-Town. He kept drawing until the last minute of his death. This museum has most of his works. All floors in the building is たたみ(Tatami, means traditional Tatami mat) which is the only museum using all Tatami floor in Japan.

I also recommend you to visit 岡本とうふ(Oakamoto tofu) which is a tofu restaurant in Oguni town. It takes about 20 minutes from Nabegataki waterfall to the restaurant.

I’ve wrote about Okamoto tofu before so please check it.

It is a little far to visit Aso area from Kumamoto city so I hope you can visit some places once.