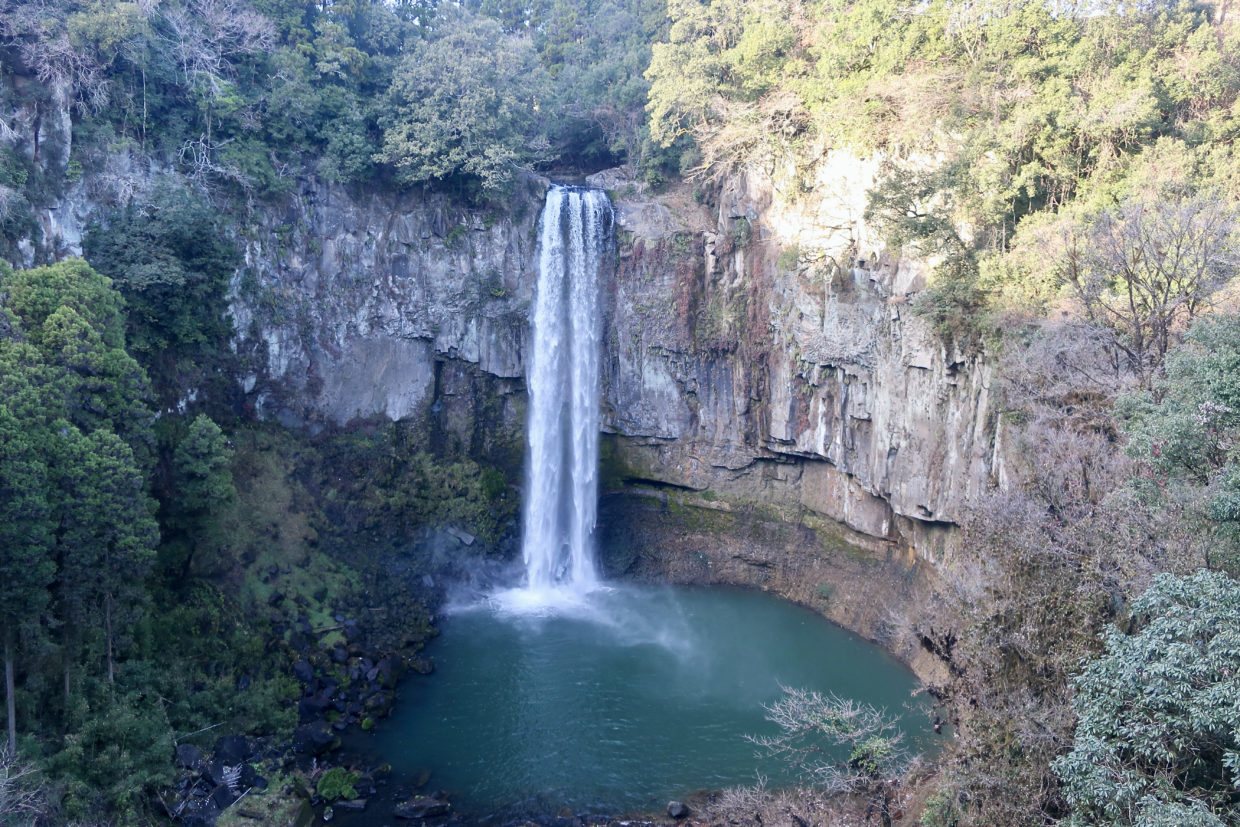 Gorougataki waterfall(五老ヶ滝) ~dynamic waterfall in Yamato-town, Kumamoto which was depicted in the historical hand scroll~

In the previous articles, I’ve introduced the beautiful stone bridges in Kumamoto and hope you enjoyed them. 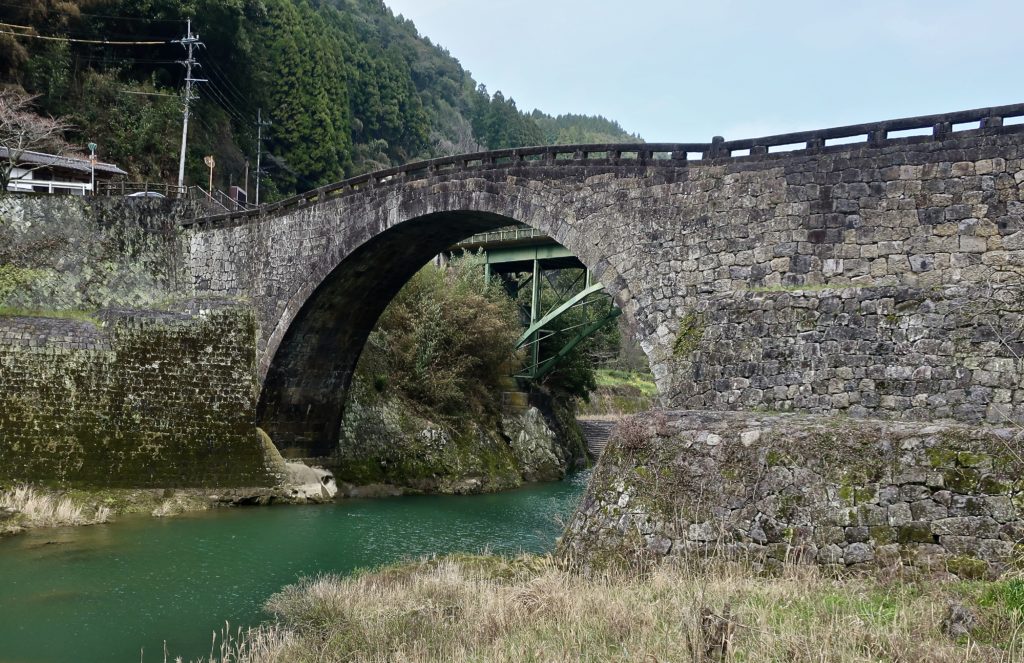 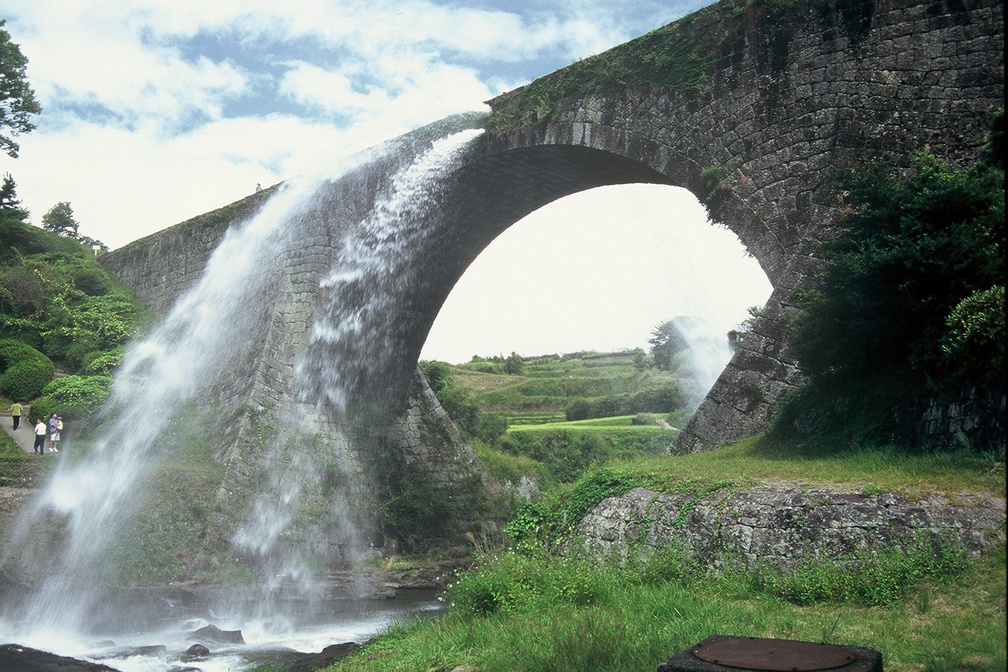 Through writing the articles, I’ve learned that to build great stone bridges, there are conditions such as professionals, financials, politics and resources.

In terms of resources, 五老ヶ滝(Gorougataki, means Gorougataki waterfall) played such an important role to build Tsujunkyo bridge to offer materials.

※ Check the previous articles about amazing stone bridges and their history!

It’s the biggest waterfall in 山都町(Yamato-chou, means Yamato-town) and stands in the downstream of Gorougataki river.

Comparing to the famous Tsujunkyo bridge, Gorougataki waterfall is not well-known.

Let’s learn about Gorougataki waterfall and explore the grand waterfall together!

There are several reasons why people had decided to build Tsujunkyo bridge near Gorougataki waterfall.

In Gorougataki waterfall, there are plenty of 溶結凝灰岩(Youketsugyoukaigan, means welded tuff) from the eruption of Mt. Aso. Welded tuff is strong but easy to process. You can see the welded tuff from the suspended bridge near the waterfall. 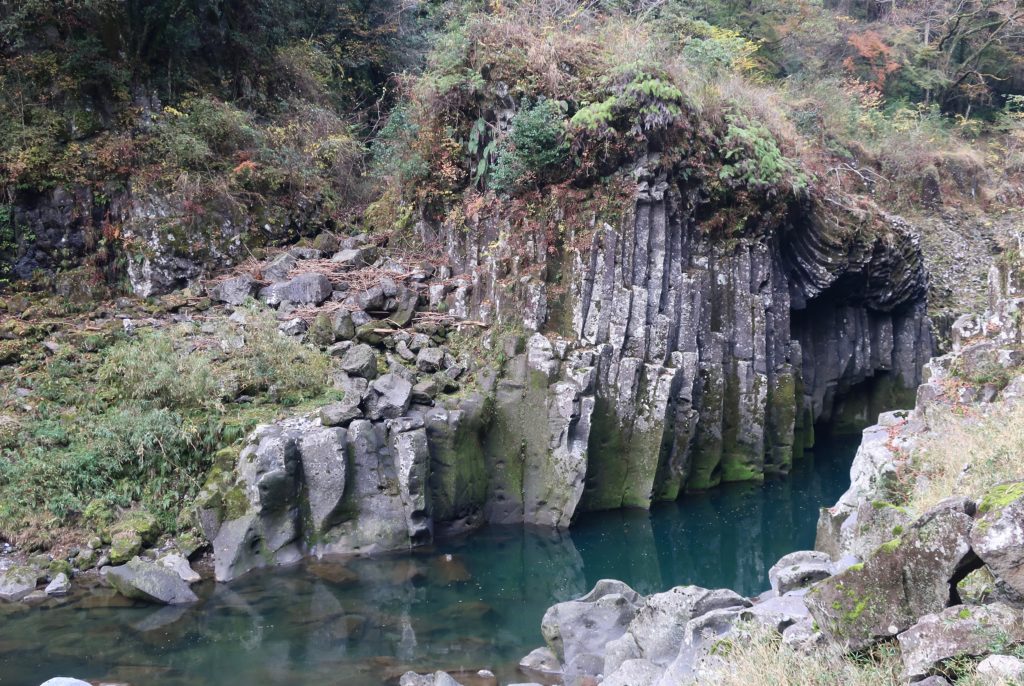 There was no machine which could carry heavy stones(each stone which was used for Tsujunkyo is about 1t!). Efficiency to carry such heavy stone was important. 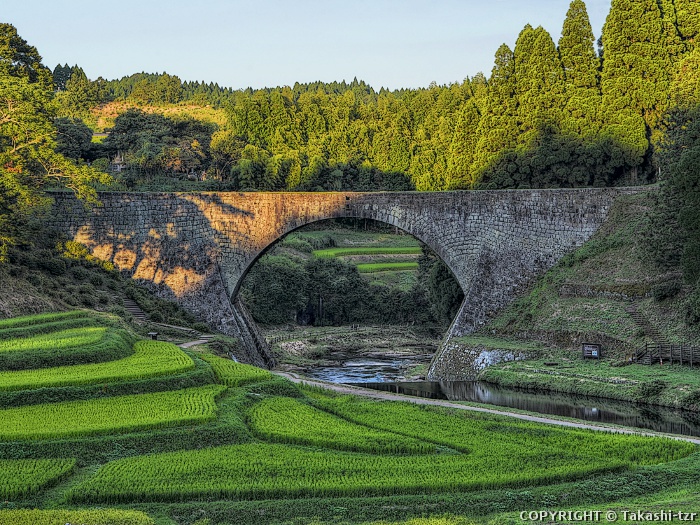 In 2008, Tsujunkyo bridge and terraced rice fields around the bridge were registered to Important Cultural Landscape. Around the area, there are paved walking paths to Gorougataki waterfall so we can enjoy the scenery.

(※ After the earthquake in 2016, path which directly connects between Tsujunkyo bridge and Gorougatake waterfall has been closed.)

Origin of the name, Gorougataki waterfall.

I’ve found the origin of the name, “五老ヶ滝(Gorougataki waterfall)”.

In the past, when the Imperial Court sent their envoys to the landlord of Aso clan(a family who used to rule Kumamoto), the family hosted them and took them to the waterfall.

In Japanese language, the formal way of saying that someone saw something, we use a verb, “goranni-natta”. Goranni-natta was corrupted to gorojita somehow and people started to call the waterfall “Gorouga-taki(“taki” means watarfall)”.

Gorougataki waterfall has attracted many people.

In Edo period, 細川斉茲(Narishige Hosokawa), who was the eighth lord of Hosokawa family, visited Yabe for shooting and dropped by at the waterfall.

He was impressed by it and ordered an exclusive painter of the family, 矢野良勝(Yoshikatsu Yano) to sketch the waterfall.

Hosokawa was overwhelmed by his work. He asked Yano to find other scenic spots in Kumamoto and sketch them. Yano edited all the drawings and completed “領内名勝図巻(Ryounai meishou zukan, means the hand scroll of scenic beauties in Kumamoto)”. 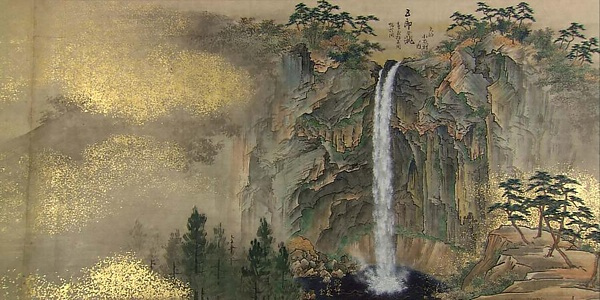 All the places on the hand scroll are registered as National Scenic Spots called, “肥後御領内名勝地(Higo goryounai meishouchi, means scenic places in Kumamoto)” .

Through a year, Gorougataki waterfall is rich in water.

With the dynamic water falling, we can see the big basin and cliff of Goroudaki waterfall.

When we went to Gorougataki waterfall, it was raining. 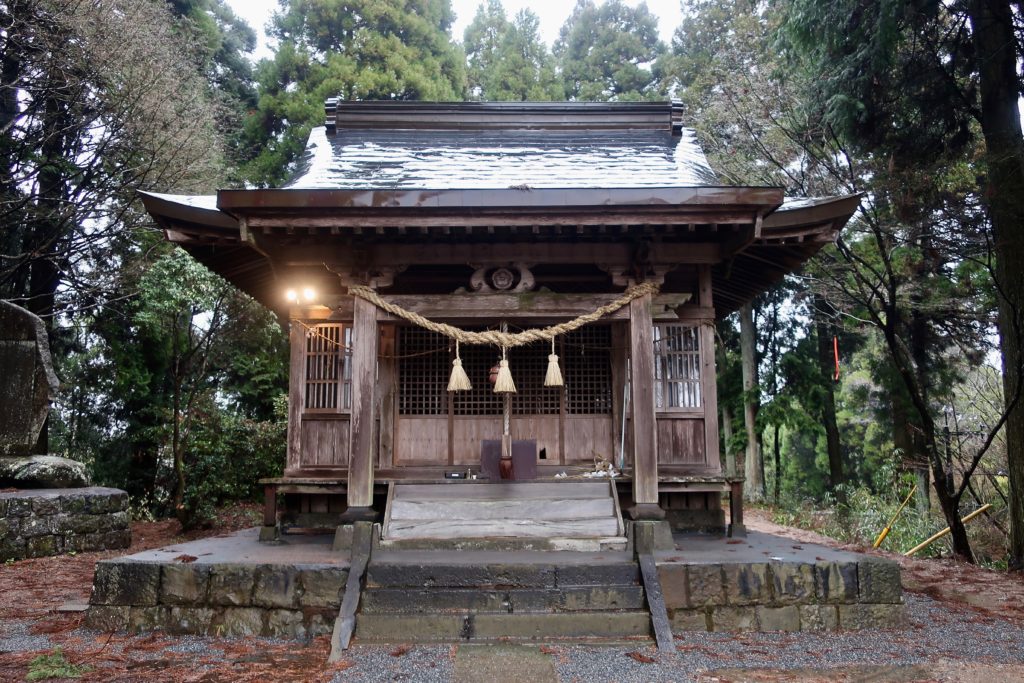 Near the parking lot, there is 布田神社(Futa jinja, means Futa shrine) which worshipped 布田保之助(Yasunosuke Futa) who was the mayor of Yabe area and one of the great person who was involved in building Tsujunkyo bridge.

※ Check and learn more about 布田保之助(Yasunosuke Futa) in the last article! 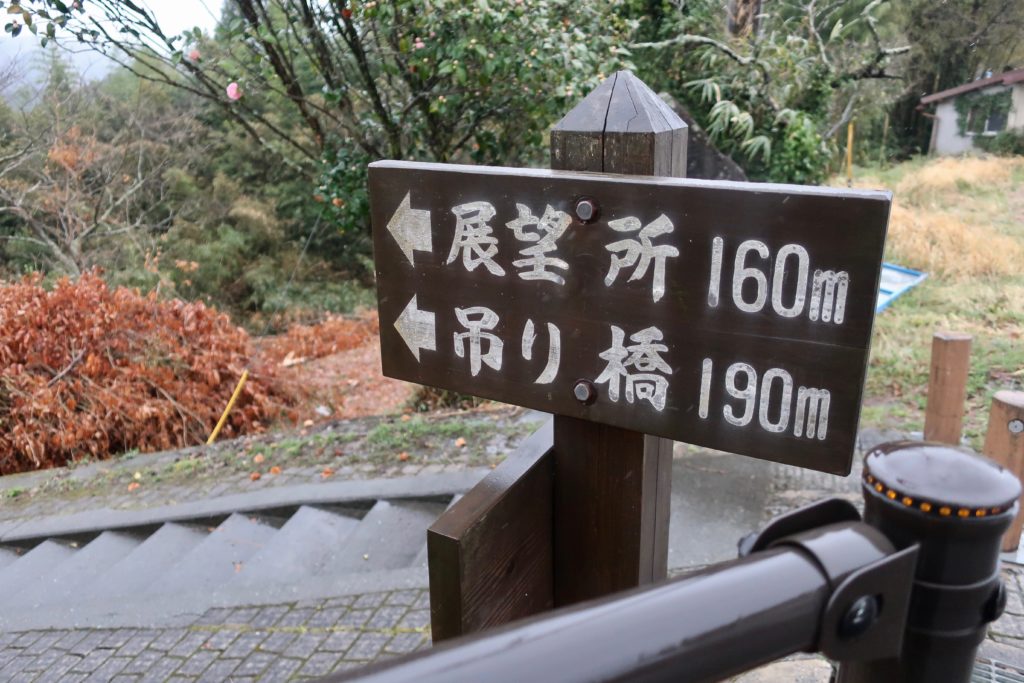 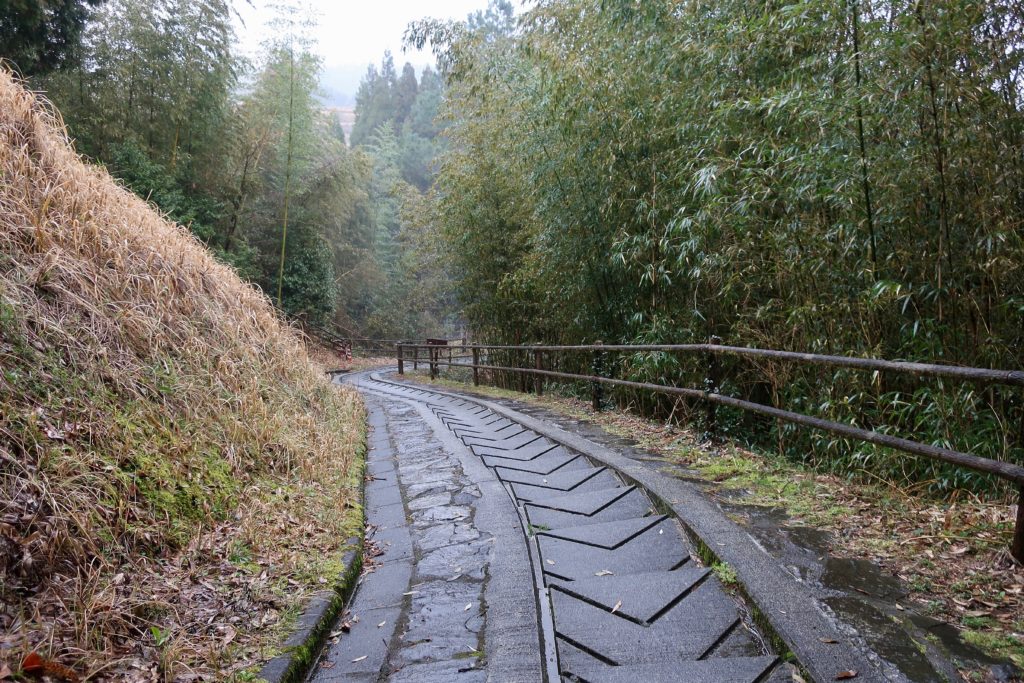 The path to Gorougataki waterfall is paved and as soon as we started to go down, we heard the sound of water. 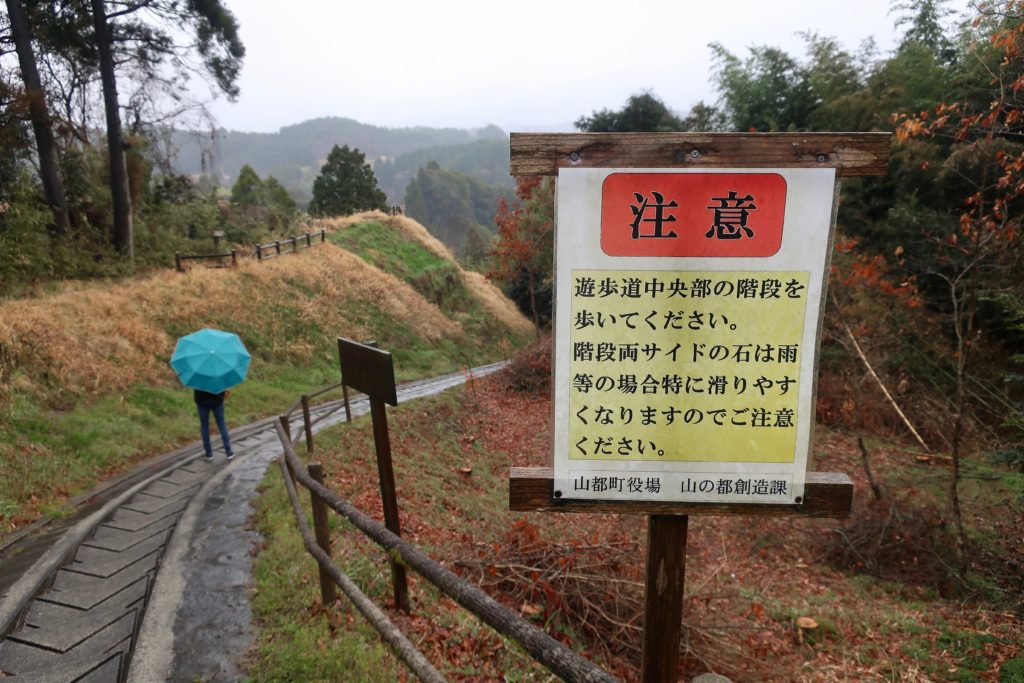 ※This sign says that because the side road can be slippery, walk in the middle. 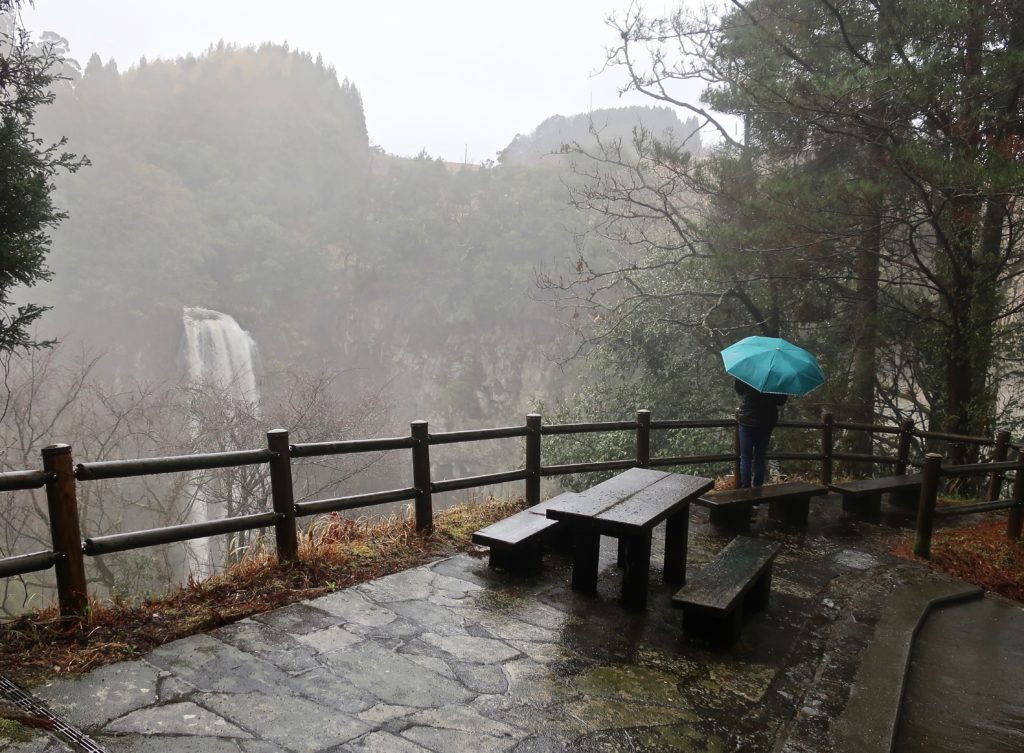 First, we reached to this point where wooden desk and chars are.

It was beyond our expectation!

We were astonished by the dynamic roaring waterfall. 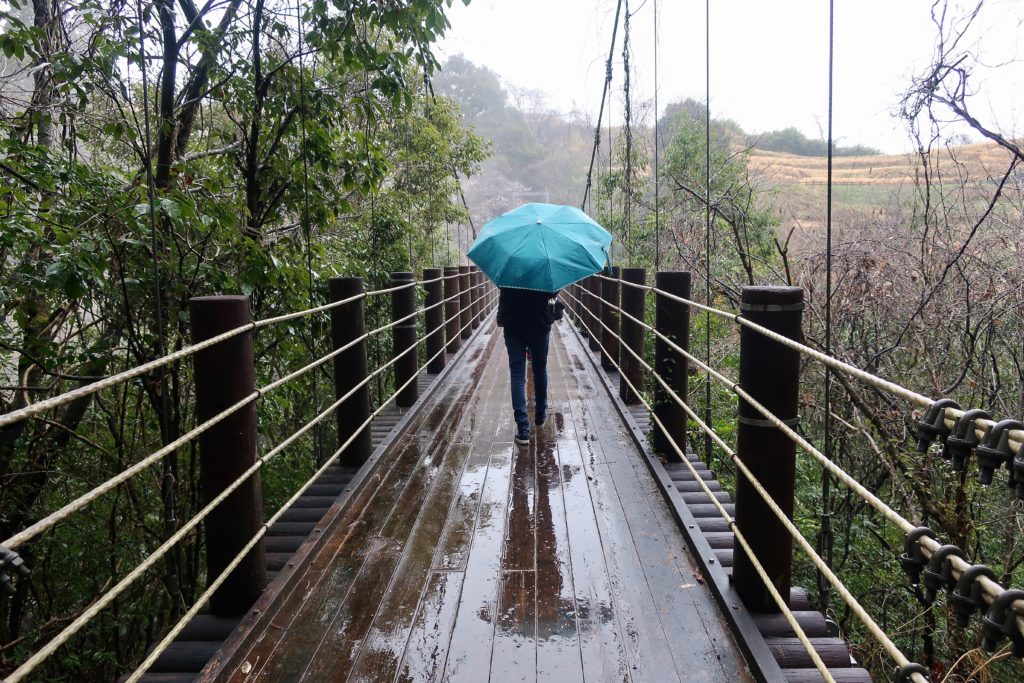 As we moved forward, we arrived at the suspended bridge which is the best spot to enjoy Gorougataki waterfall.

Gorougataki waterfall is 50m high and 9m wide. I was surprised the size of water basin. 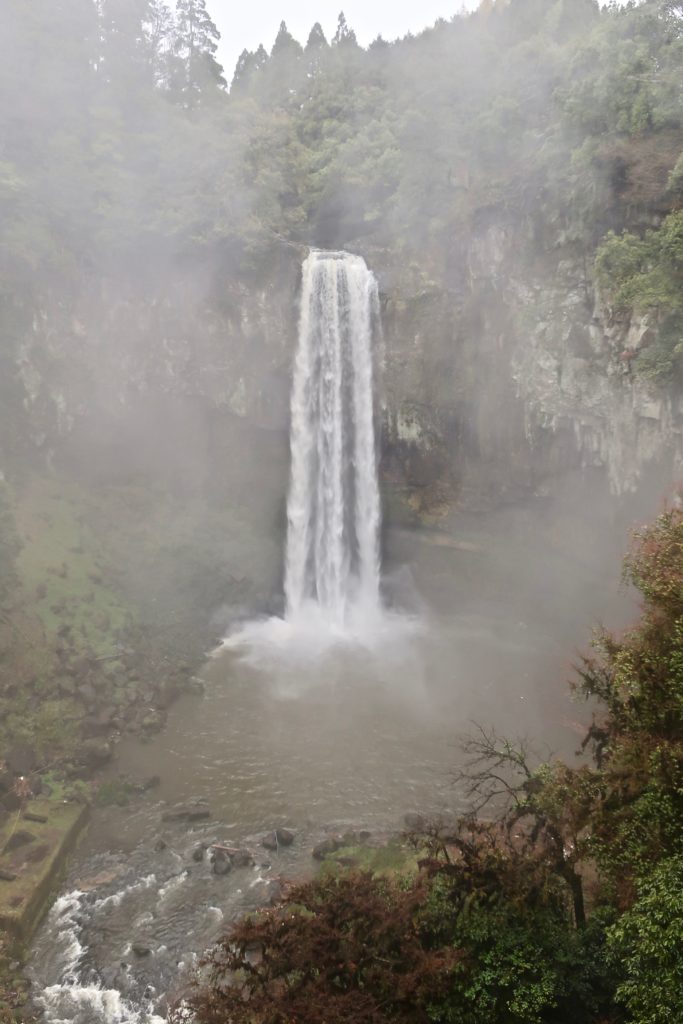 By the view, I perfectly understood how Hosokawa was attracted by Gorougataki waterfall and wanted to capture the scenery.

I’ve heard that if you’re lucky, you could see a rainbow.

There used to be an access to the water basin but after the earthquake, we can’t go near to it.

We were amazed by Gorougataki waterfall and couldn’t believe why it is not popular.

We went there in March. You’ll enjoy any time of year, enjoying the change of season. 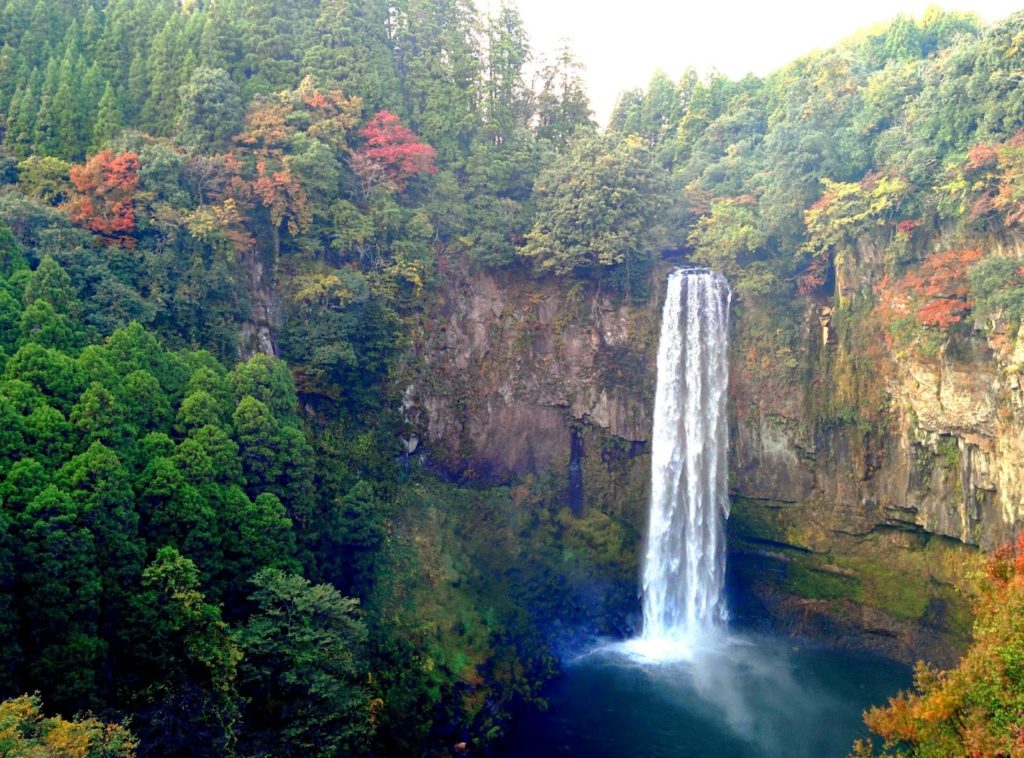 Gorougataki waterfall is the great place to visit along with some stone bridges , such as Tsujunkyo(just 10 minutes on foot!) and Reidaikyou.

You’ll be mesmerized by it and think about people in the past who were also wowed by it!