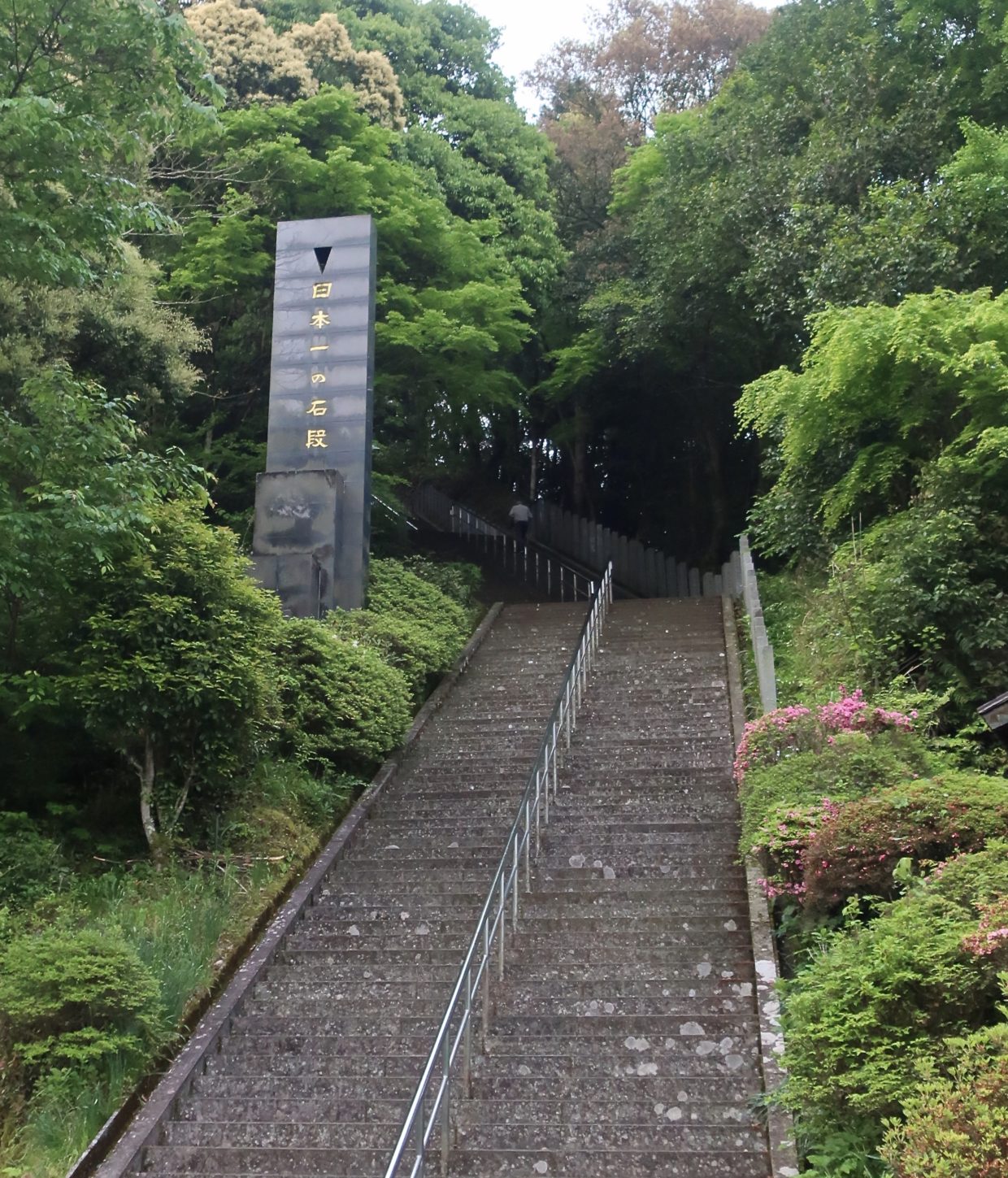 I have never been good at any sports and actually, I hated them since my childhood.

It seems like I lost my mind but this time, I decided to challenge myself to climb 3,333 stone steps in 美里町(Misato machi, means Misato-town). It is called “日本一の石段(Japan’s No.1 stone steps in Japan)”. 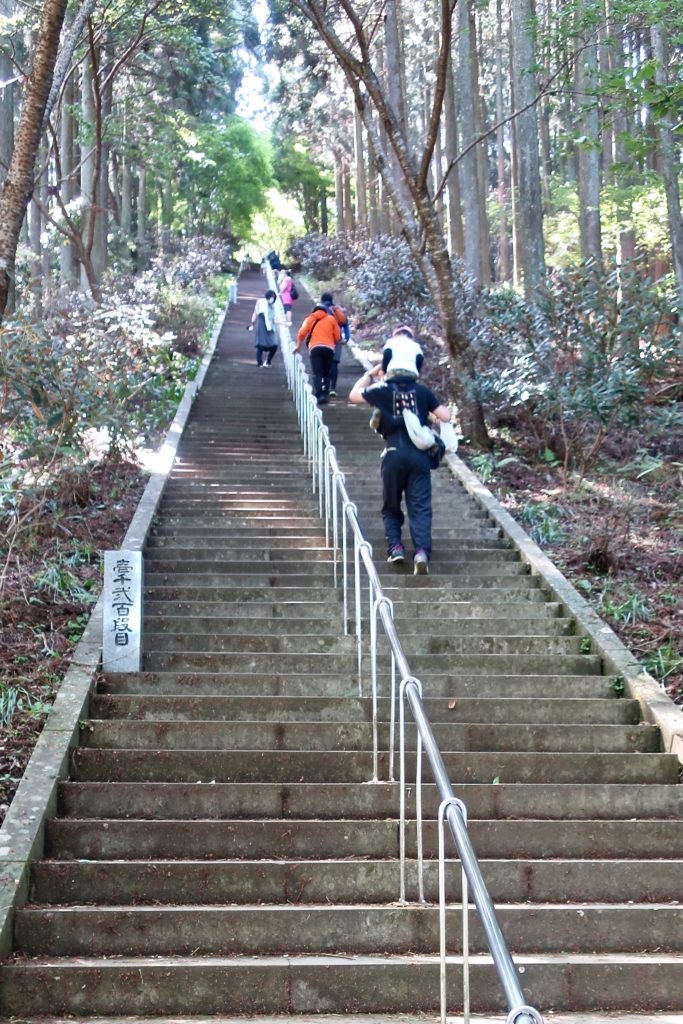 As I introduced in the last articles, there are many beautiful stone bridges around Misato-town which is full of history.

五老ヶ滝(GOROUGATAKI WATERFALL) ~DYNAMIC WATERFALL THAT WAS DEPICTED IN THE HISTORICAL HAND SCROLL~ → http://untappedkumamoto.com/nature/1426

This time, I’d like to introduce another “stone architecture”.

Long way to go to Shakain(釈迦院).

There is a mountain named 大行寺山(Daigyoujiyama, means Mt. Daigyouji) which is 957m high.

On top of it, there is a temple names 釈迦院(Shakain). 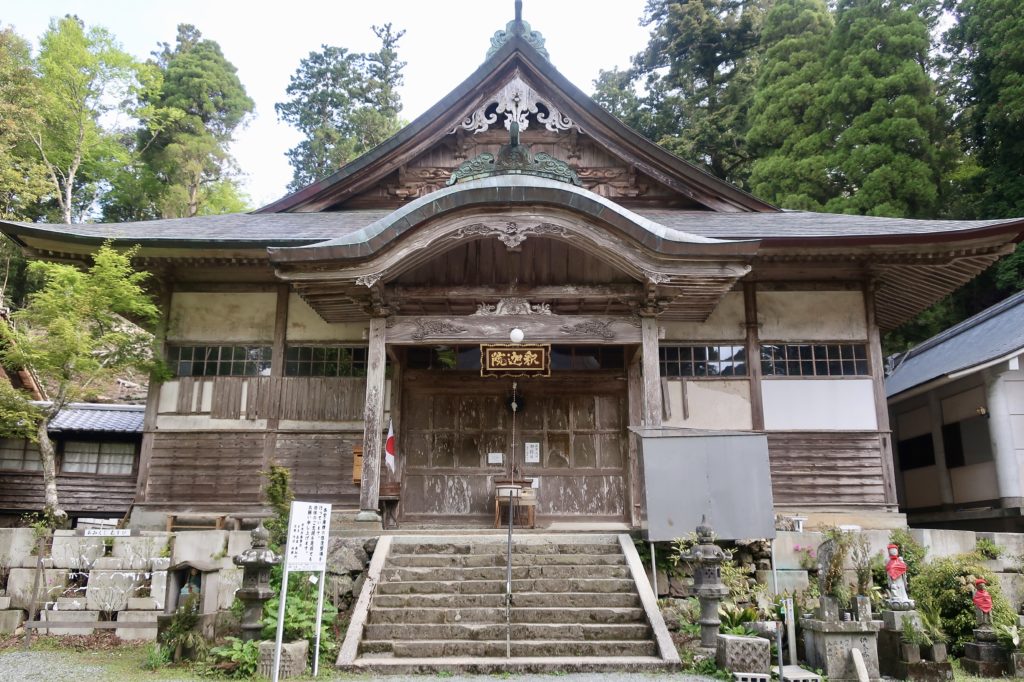 Shrines and temples have path to the main hall. For this Shakain, this 3,333 stone steps are the path to the temple.

The length of the steps is about 2km and the hight from the bottom to the top is 620m.

What was the purpose of building 3,333 stone steps?

The governor of Kumamoto at that time was 細川護熙(Morihiro Hosokawa) who is the descendant of Hosokawa family(a family who ruled Kumamoto in Edo period) and later became the 79th Prime Minister of Japan.

Hosokawa wanted to make Kumamoto more appealing to people outside.

He proposed a campaign “日本一づくり運動(No.1 Japan campaign)” and this 3,333 stone steps was one of them.

Misato-town joined it and started to build the steps.

There already used to be a rough mountain trail to Shakain but it wasn’t paved and organized at all.

Misato-town started to build steps over the trail.

Previously, Japan’s No.1 stone steps was 2,446-step in Yamagata-prefecture. 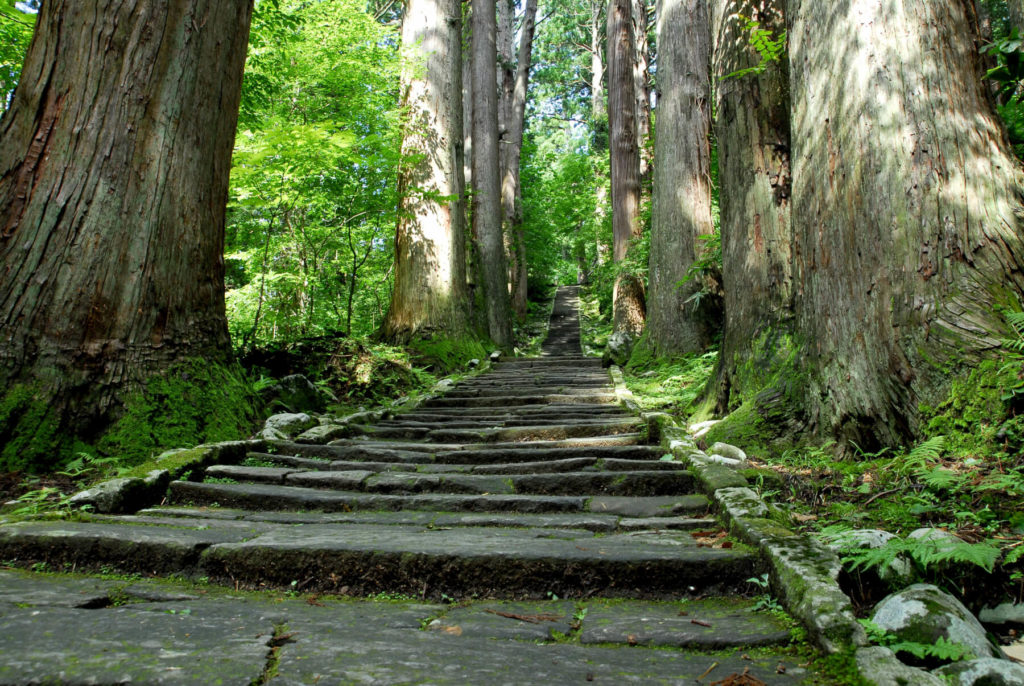 You might have wondered the reason of the number, “3333”.

I’ve found that in Buddhism, “3” is considered to be a good number and 3,333 is doublet so it sounds very nice!

The reason they used stones from these countries is to show international friendship and to make the steps internationally valuable.

Many foreign tourists visit there and challenge themselves to complete it. This idea has succeeded to bond people around the world.

Run up the 3,333 steps faster like white dragon! : Two competition to challenge yourself ; Sponsored by Misato-town and Red Bull.

Since 2015, Red bull has organized an event, called 白龍走(Hakuryusou) in every June. 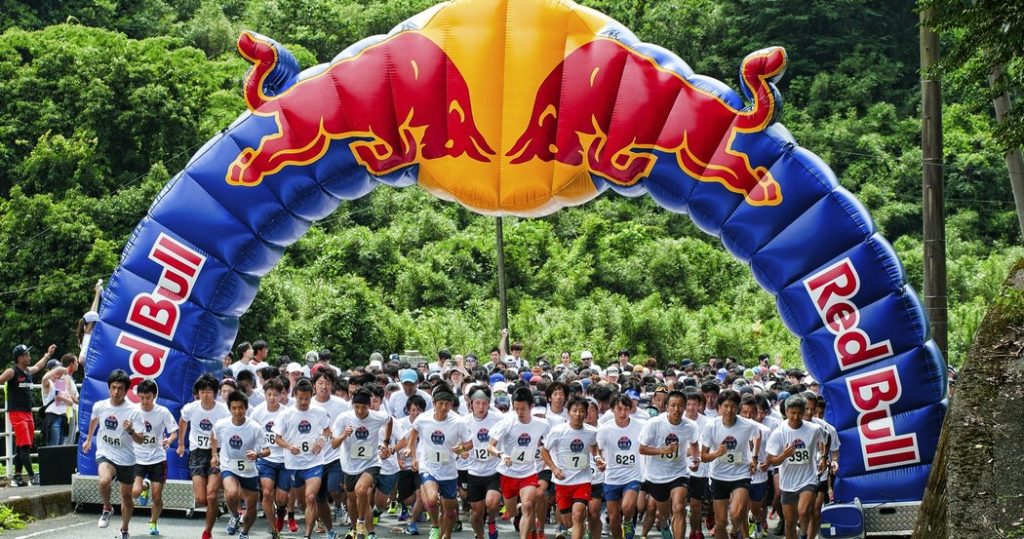 白龍(Hakuryu) means “white dragon” They named it by the image of people running up the steps which looks like dragon going up to the sky. 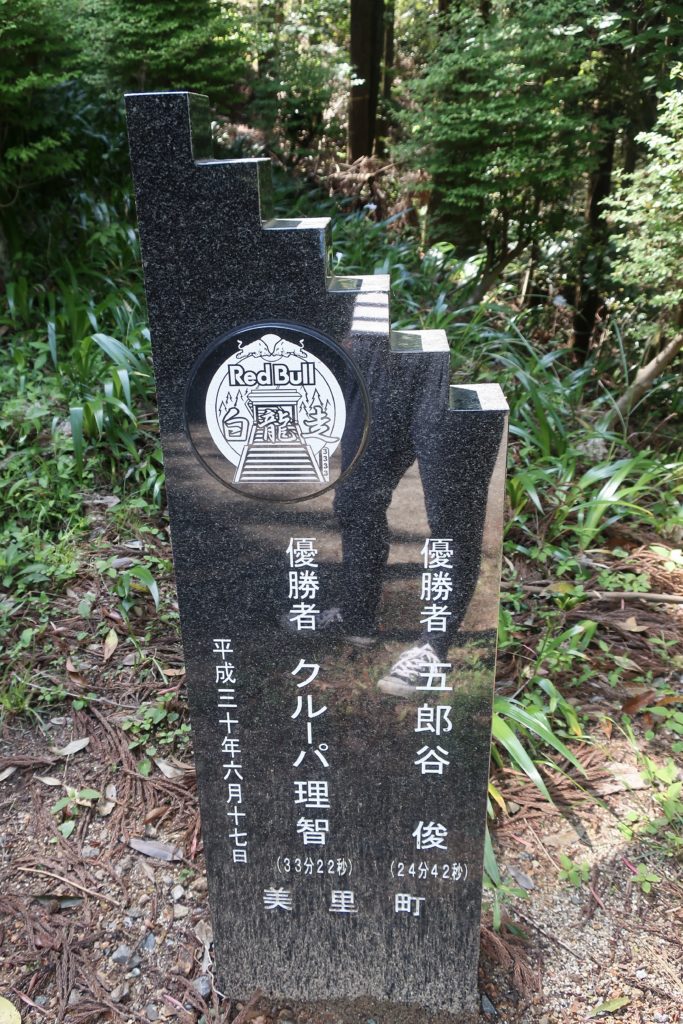 Every November, there is another competition called アタック・ザ・日本一(Challenge the Japan’s No.1) which is sponsored by Misato-town and the local TV station. In this competition, you can choose 3,333 steps or 1,620(half) steps.

My friend and I visited there during the Golden week holiday 2019.

We had 10 continuous national holidays this year, because of our new emperor ascending the throne.

I was sure it would be very crowded so we left Kumamoto-city at 5am and arrived at 3,333 stone steps at around 6am.

There are some 駐車場(Chushajou, means parking lot) near the steps. 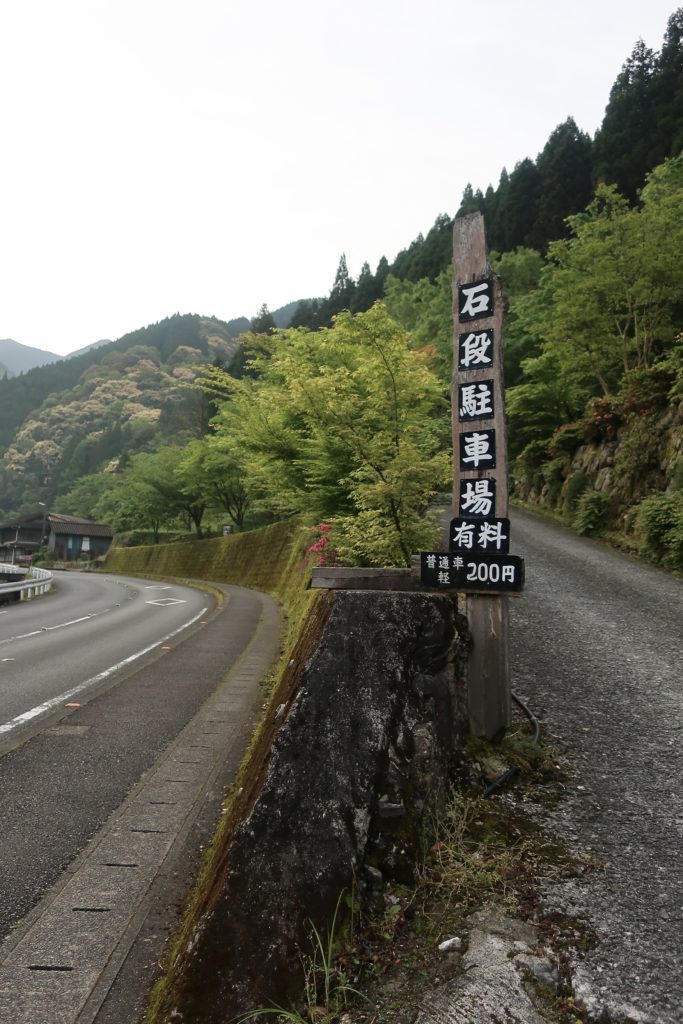 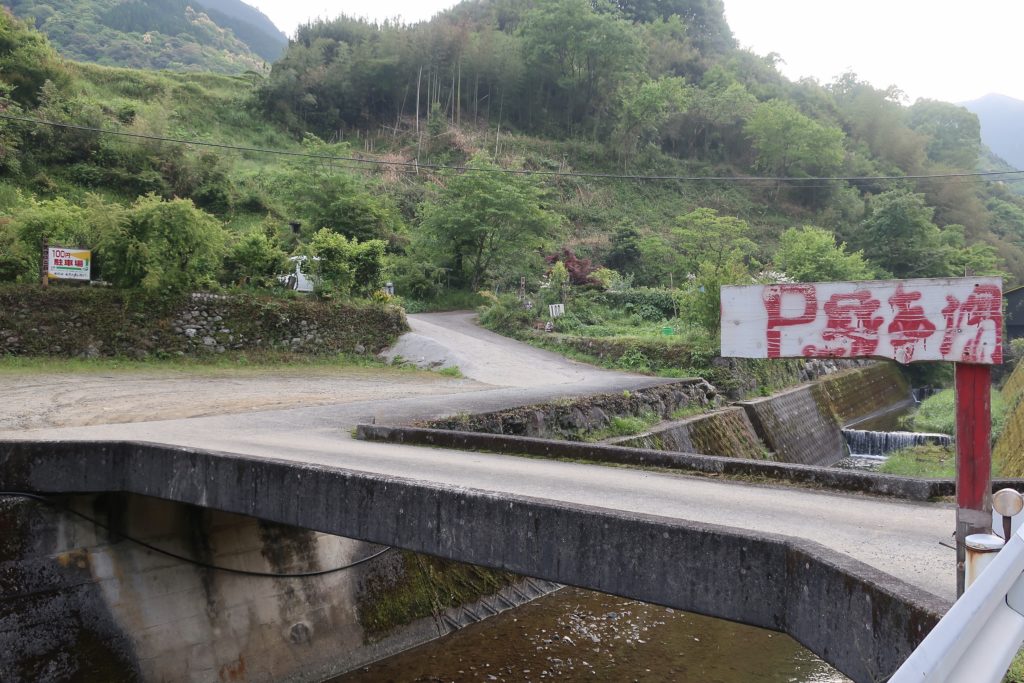 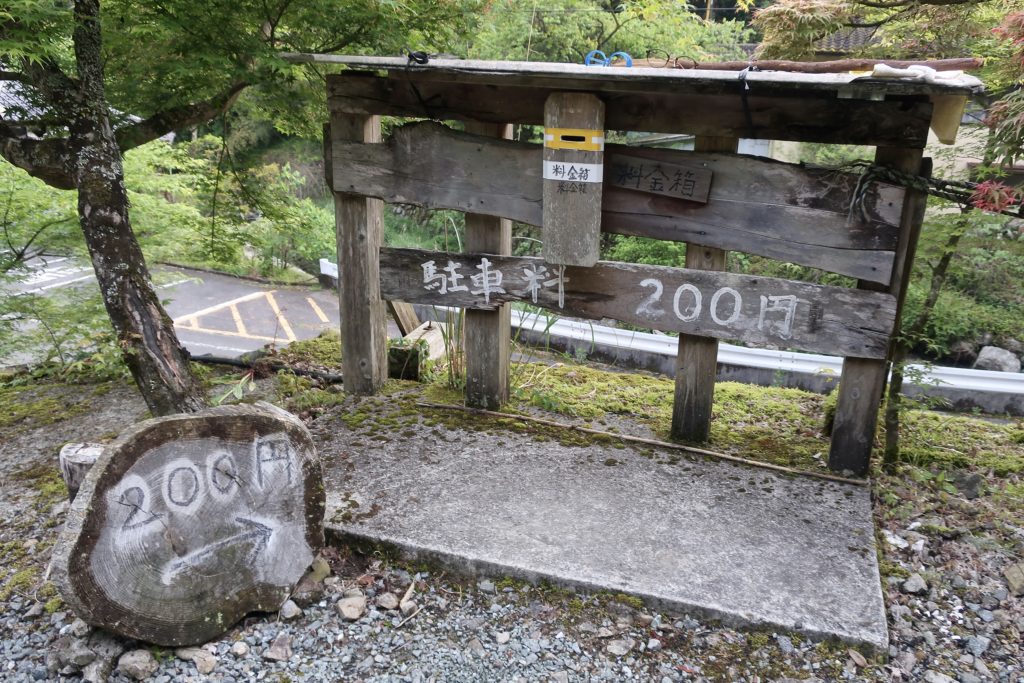 Don’t forget to put your money into the box before leaving!(I didn’t know when to put money so I did before leaving the parking.)

As you walked forward, you’ll see this 狛犬(Komainu, means guardian dogs which are placed at the gate of a shrine or a temple). 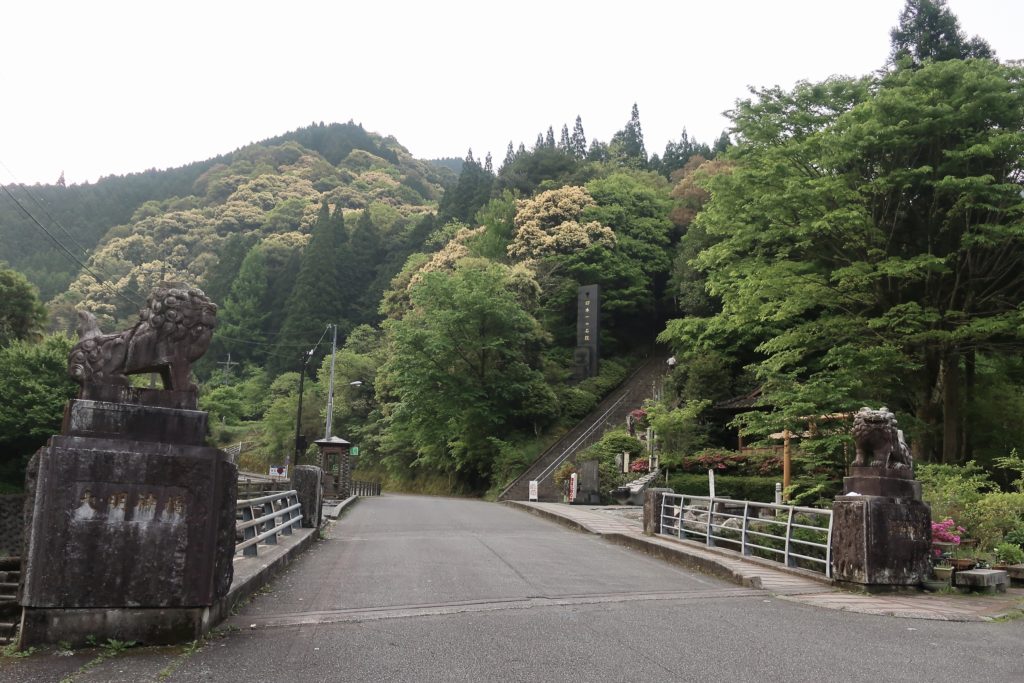 As I explained, 3,333 stone steps is the path to the Shakain temple up there so the guardian dogs show this is the entrance to the temple. 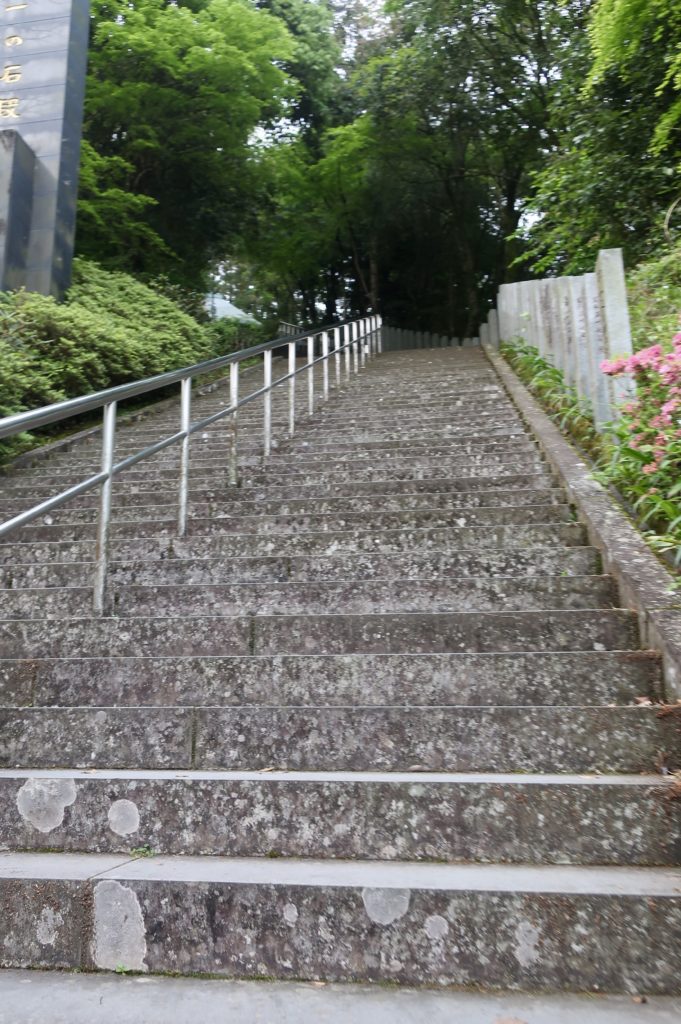 There is one thing you should remember, which is walking right side when you go up and down.

At first, we were talking and climbing but very soon after I found myself out of breath already.

I have to tell you that the first 100 steps were the most difficult part because we don’t usually climb steps even for 100! 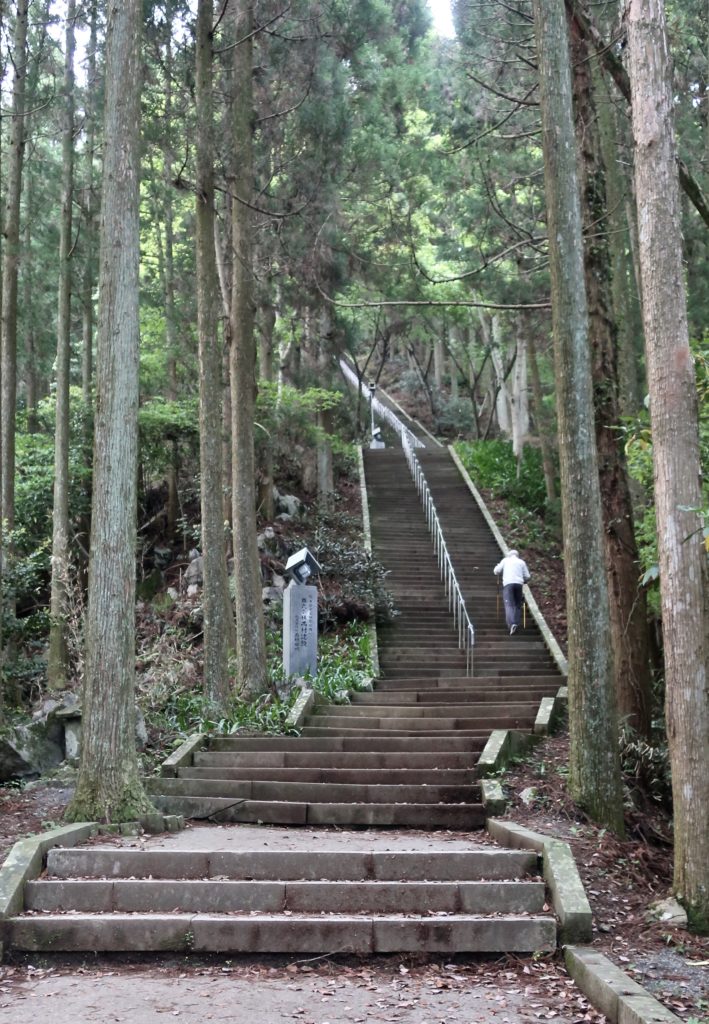 We met this 70-year-old gentleman with his stick.

He said he had climbed Mt.Fuji at the age of 50 and 60 and he was preparing for another try this year.

I was picking up the pace but got tired and out of breath so easily. The gentleman advised me to slow down a little bit because it’s long way to go(sounds like a life!?).

My friend is very active and she knows how to climb(she has also climbed Mt. Fuji before!). She gave me an advice not to drink water a lot at once. She said that it’s better to drink a bit of water enough to hydrate my mouth.

Thanks to their advice, I gradually adopted and got the nice pace.

Surprisingly, I didn’t feel much pain or fatigue for my feet. The problem was how to manage my breath. 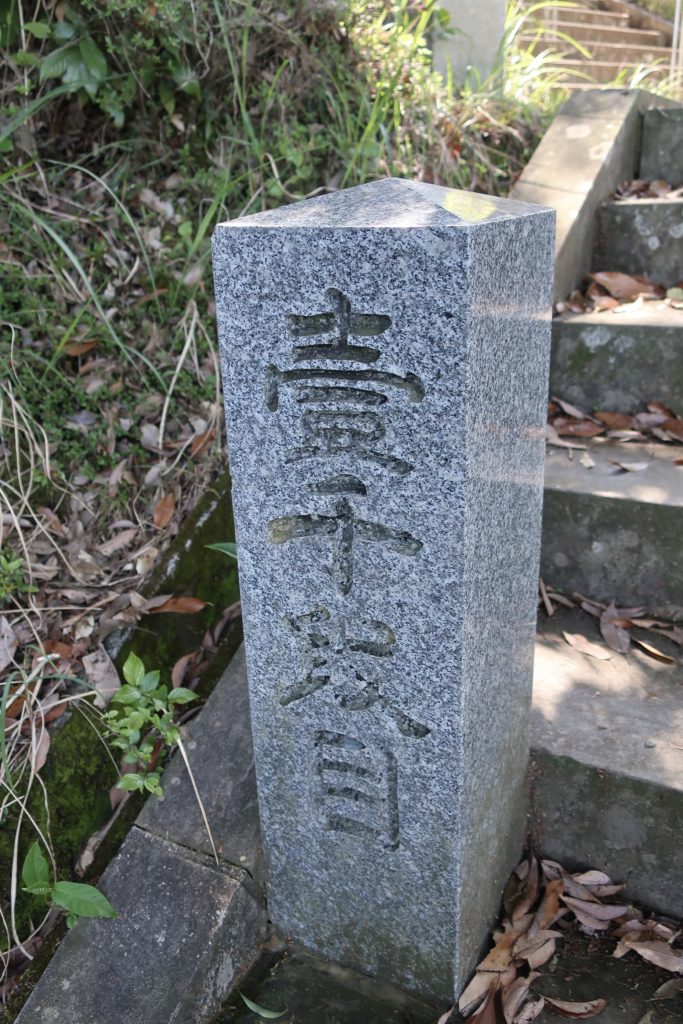 There are these small mile stones at each 100 steps.They are written in old Chinese character so you may find it difficult to understand.

I show you what they mean. 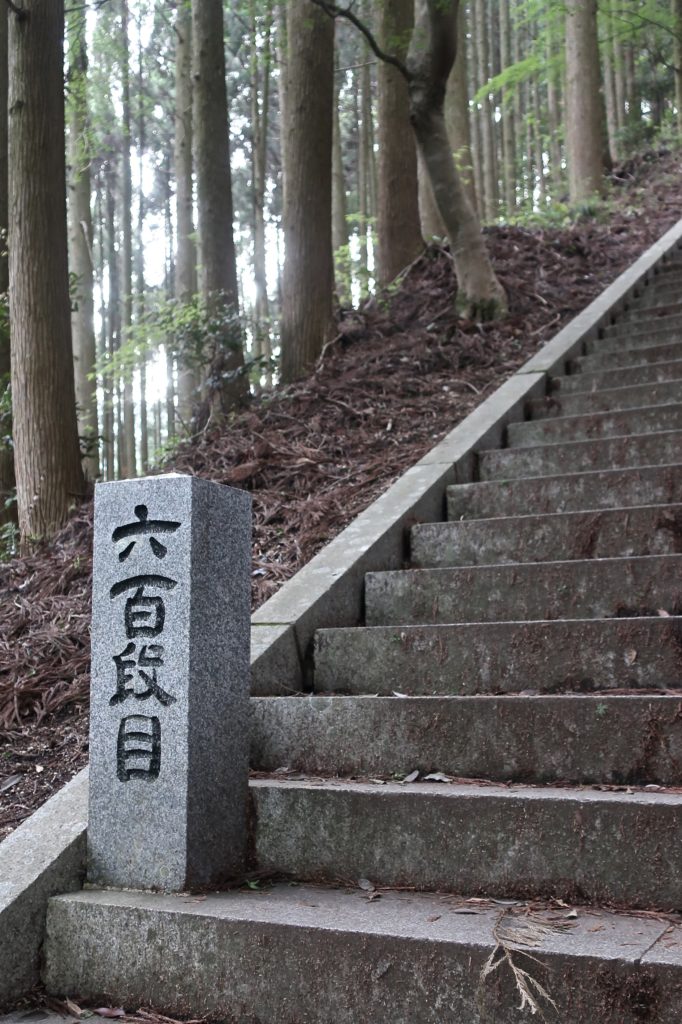 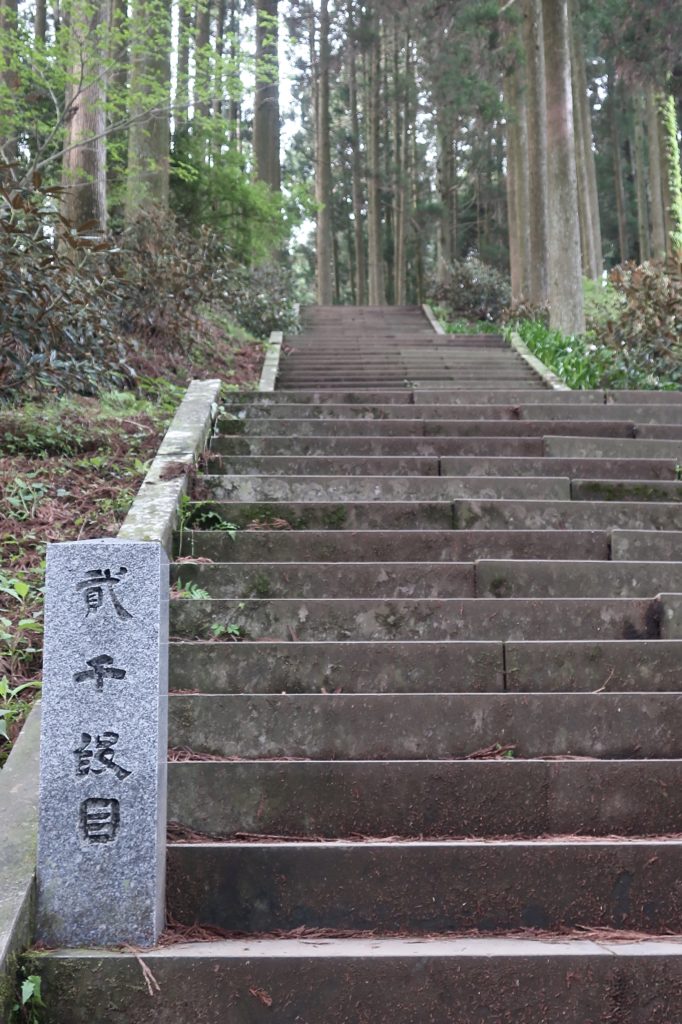 I hope it’ll be useful for you to count the number.

It’s a good motivation to know how many steps you climbed.

Even though it was around 7-8am, we met a few people who were already running down the steps. I was wondering what time they came. How active they are!

What I enjoyed while climbing was greeting.

Every time we meet someone, they gave us pleasant greeting each other.

Usually on the street, people just pass through and only care about themselves but on the 3,333 steps, they greeted each other and care about others, which I found it really nice.

The other good thing is the nature.

If you keep looking at endless stairs, you may get despaired.

You’ll be able to relax and it will ease your fatigue. 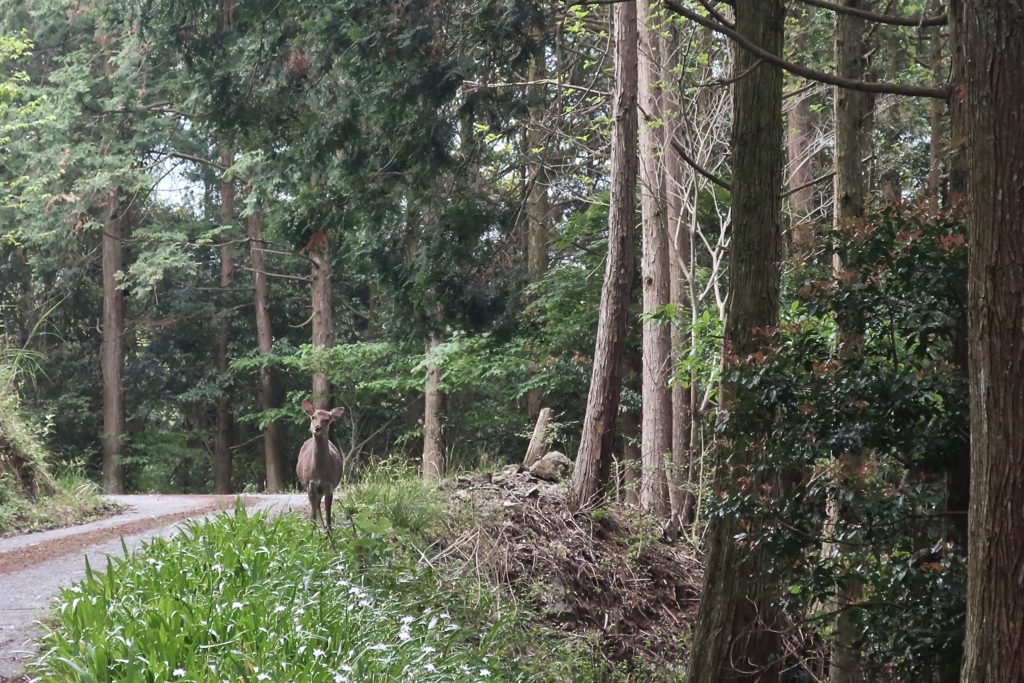 After 800 steps, we met this lovely young deers! 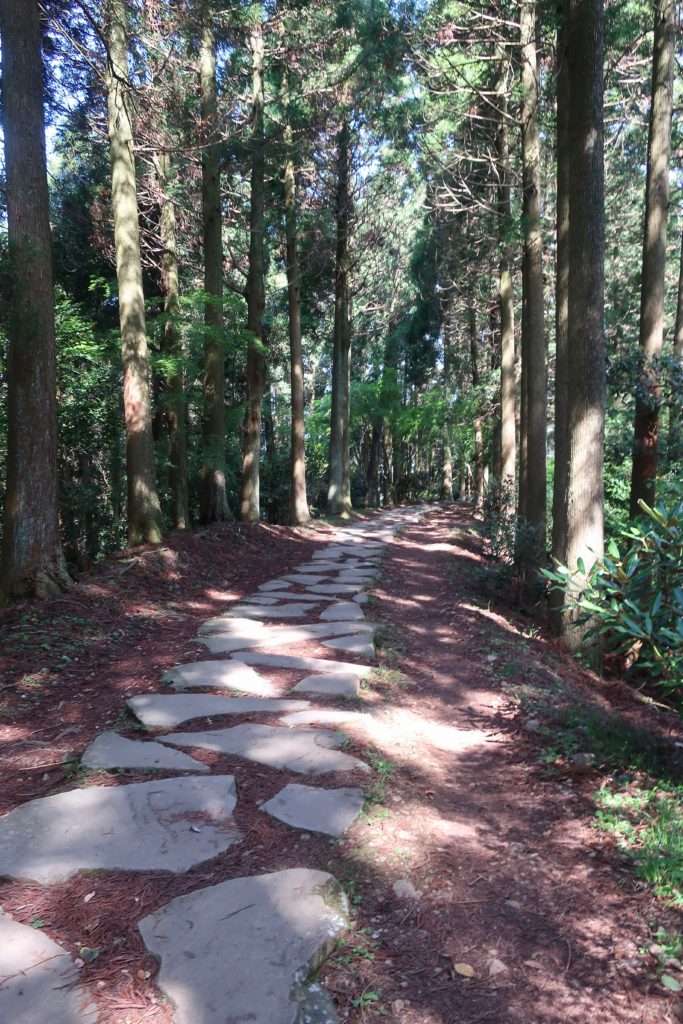 In between, there are some parts with stepping-stones. I was so grateful to walk on the flat street! 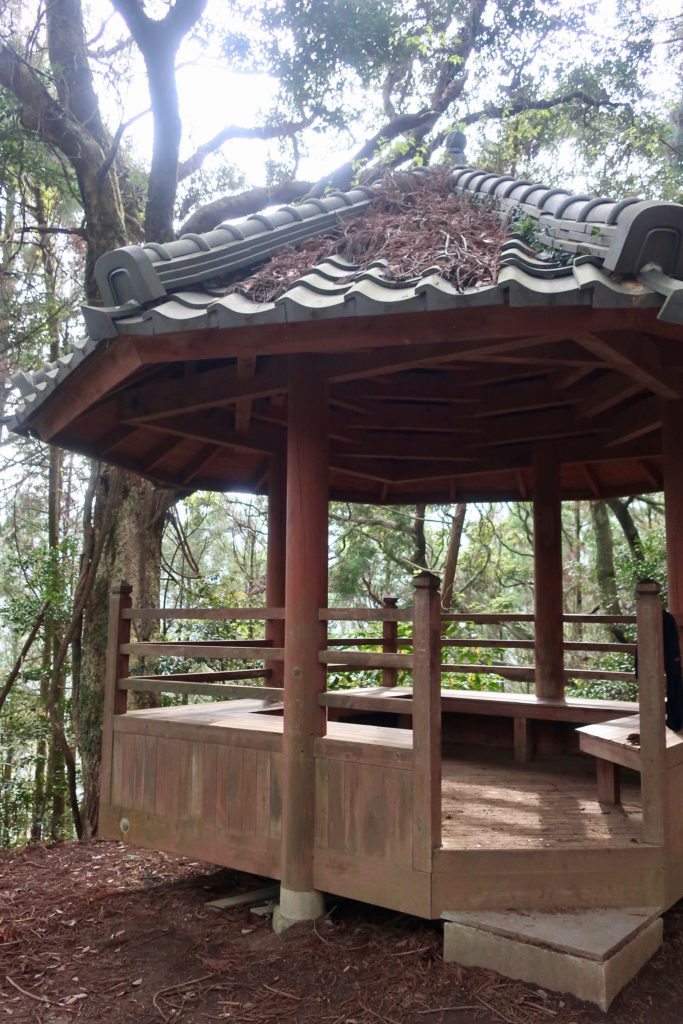 There are many resting points. 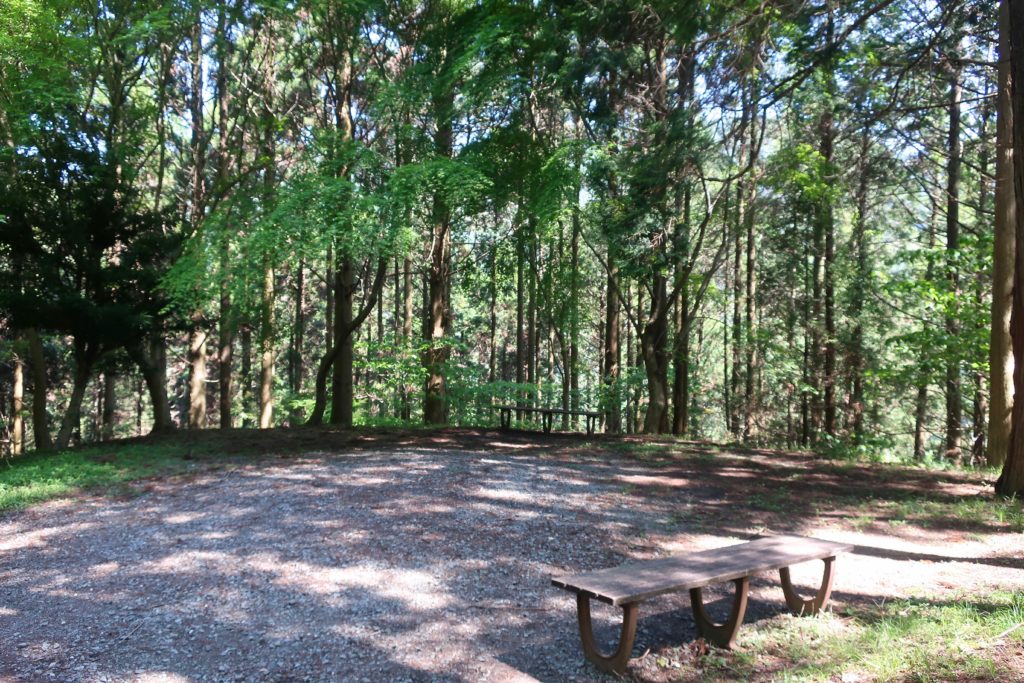 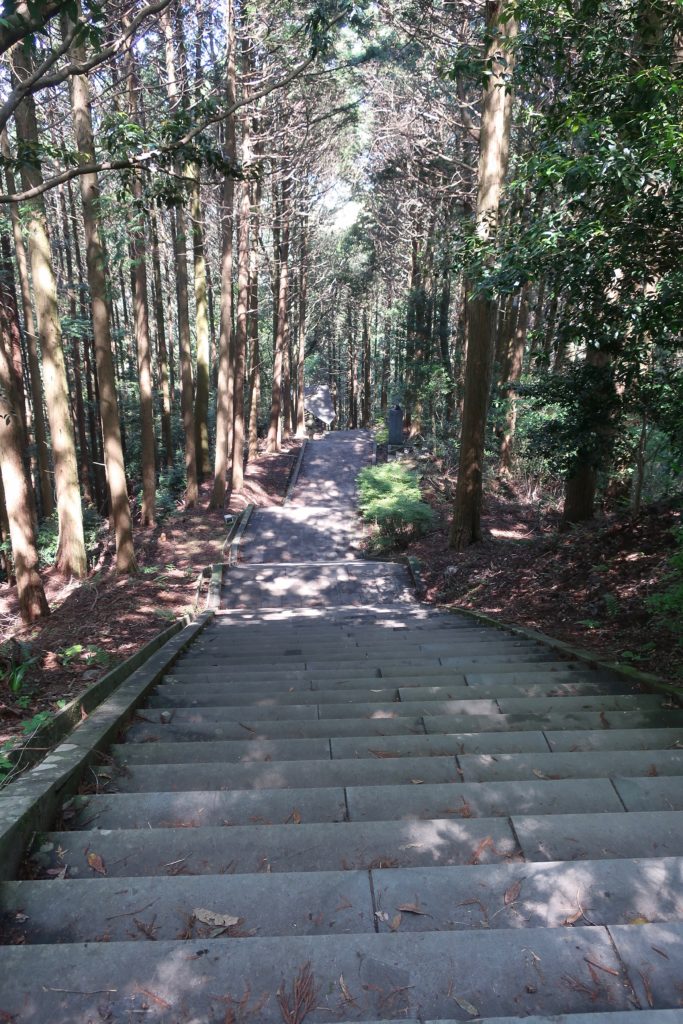 Sometimes I looked back the steps I had climbed.

I know its’s too early to feel the sense of achievement but it’s nice to give myself just a little pat on the back, isn’t it? 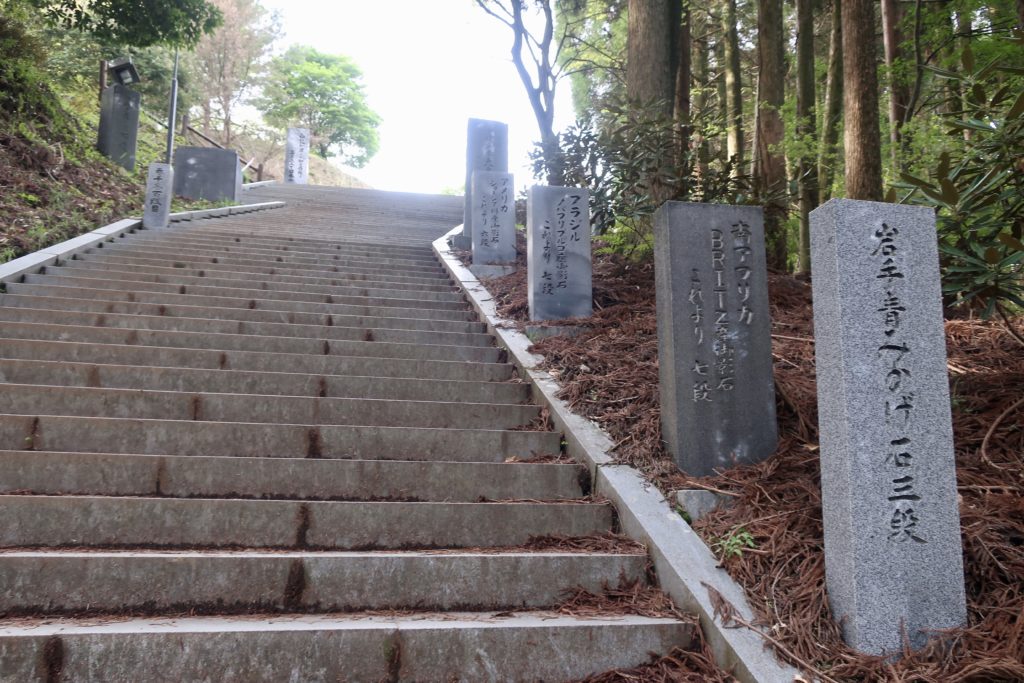 After 3,200 steps, you’ll see the stone monuments along the steps which shows where these stones are from.

As I explained, they used stones from 7 different countries.

These two steps are from different countries but can you tell the difference? 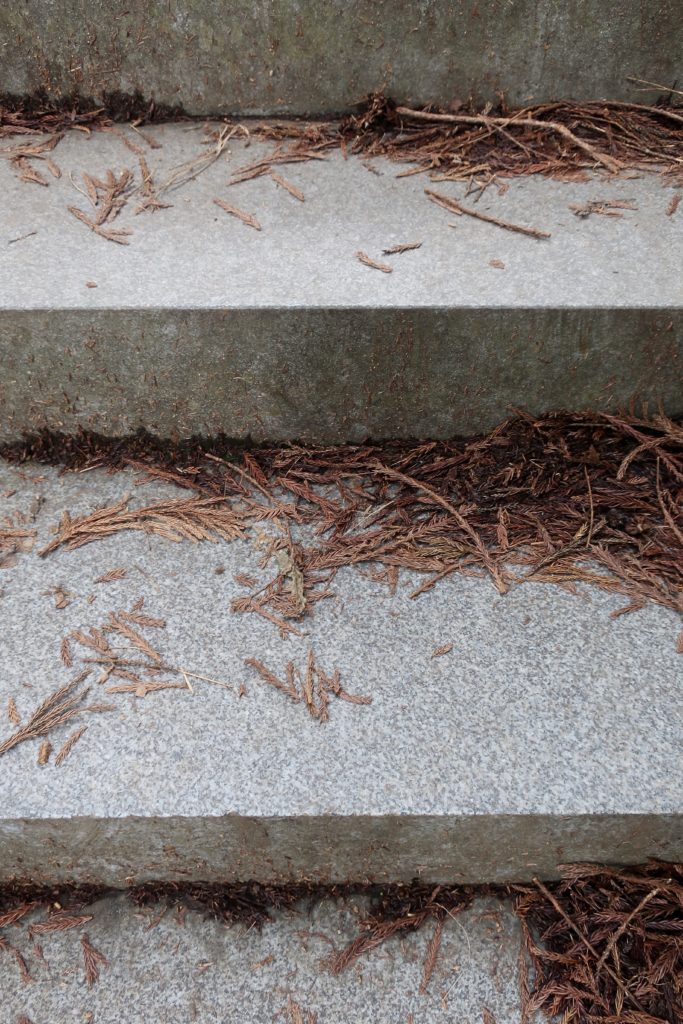 Finally, we reached to the top!!! 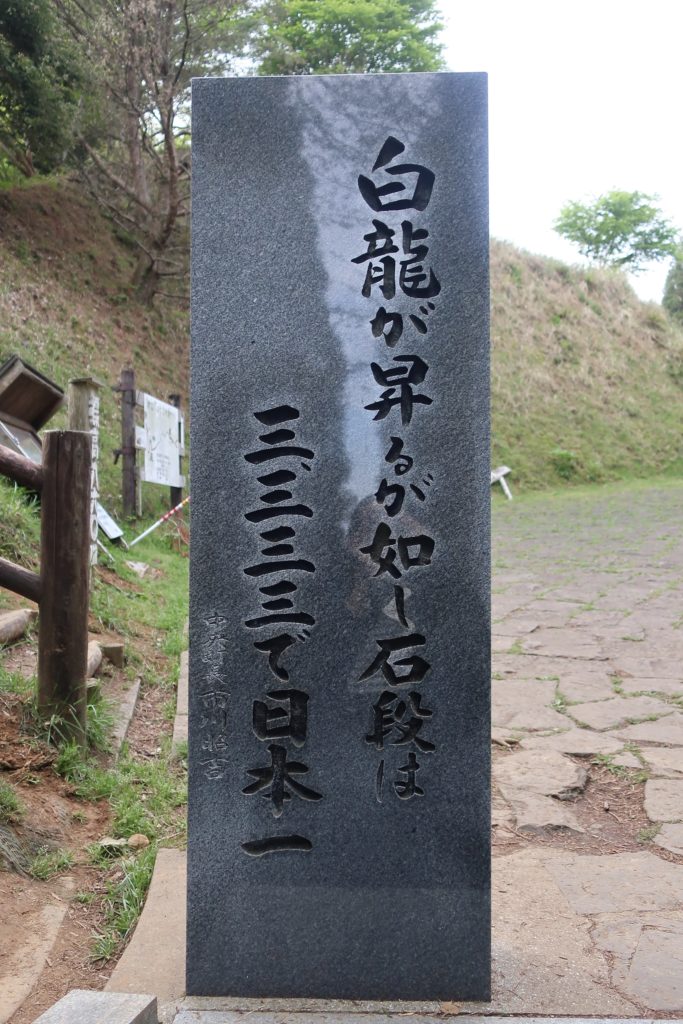 On this stone monument, it says this 3,333 stone stair is like white dragon climbing up and this is Japan’s No.1 stone stair.

Now you understand how fast the participants of the competitions were!

It was a big challenge for me but I got the great sense of accomplishment.

Don’t forget that this 3333 stone steps is the path to Shakain temple and this stone monument just shows you finished stone steps!

Walking about 1km more, then you’ll reach to Shakain temple. On the way to it, you can enjoy amazing view.

But don’t worry, there is no more steps to Shakain!

The beautiful scenery and peaceful Shakain is another treat for you after completing 3,333 stone steps.

I’m going to write about Shakain later so check it out.

Try 3333 stone steps. Don’t be afraid to try because even I could complete it.

There are many rewards waiting for you! 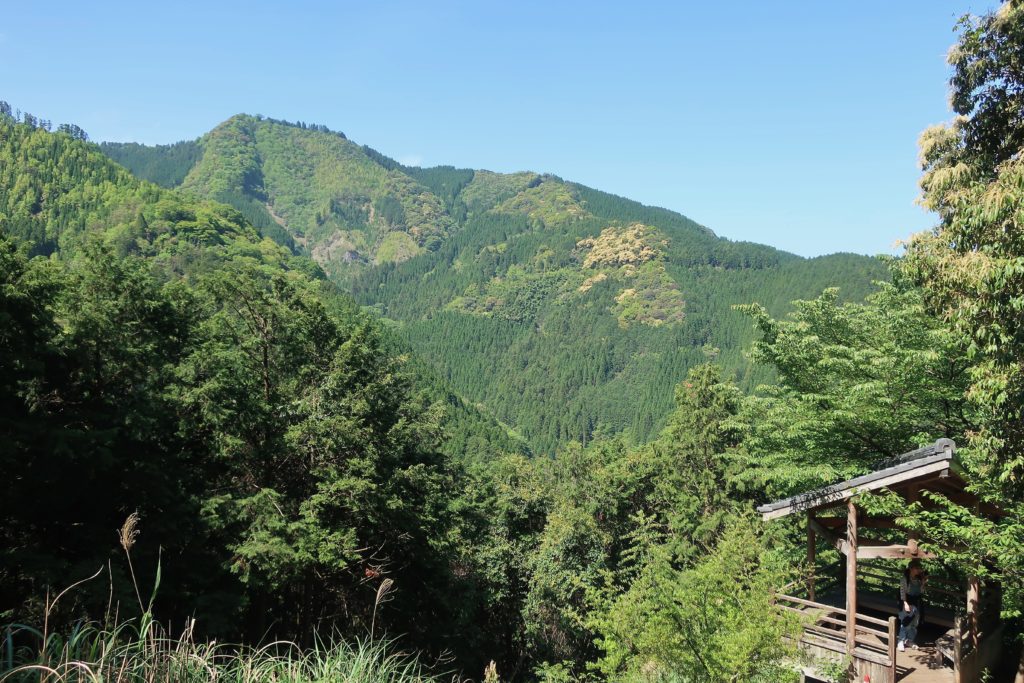