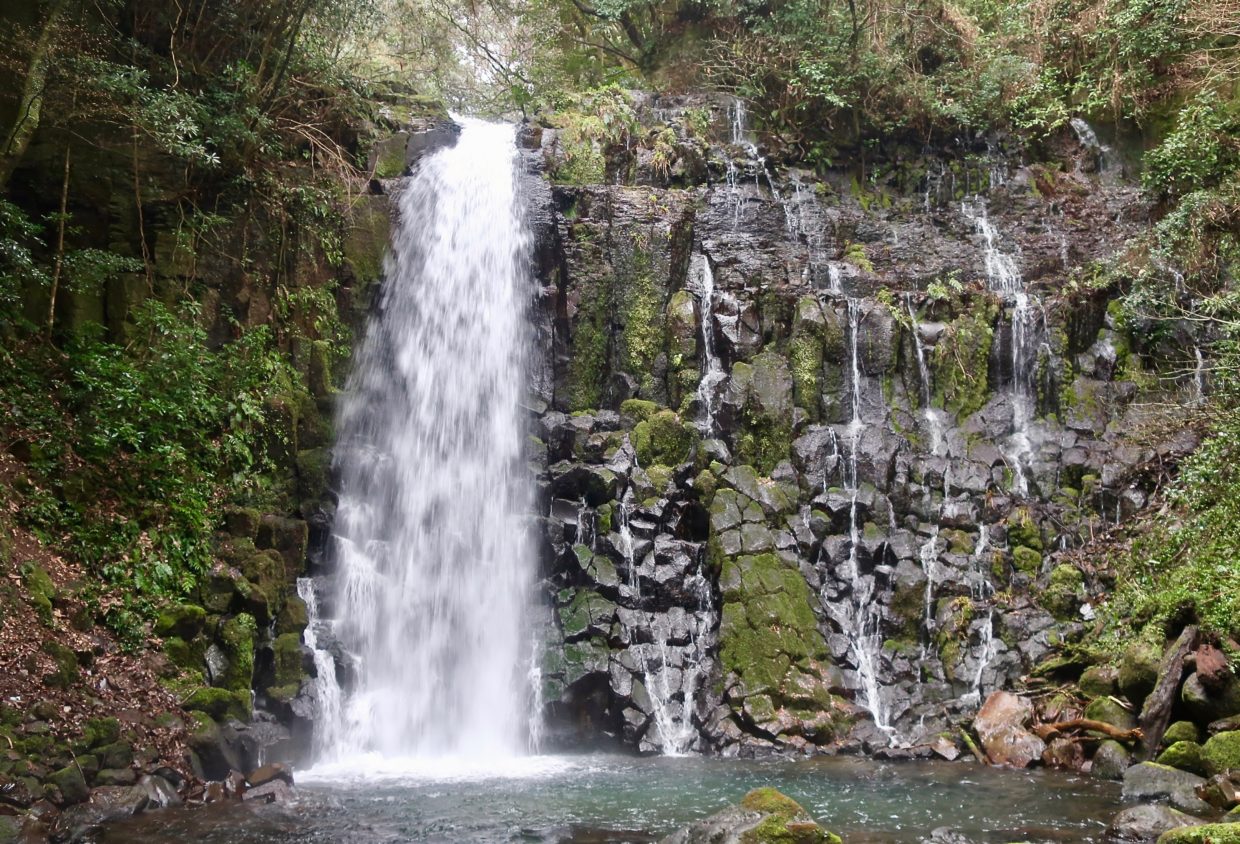 I assume that most of you would say “No.”. 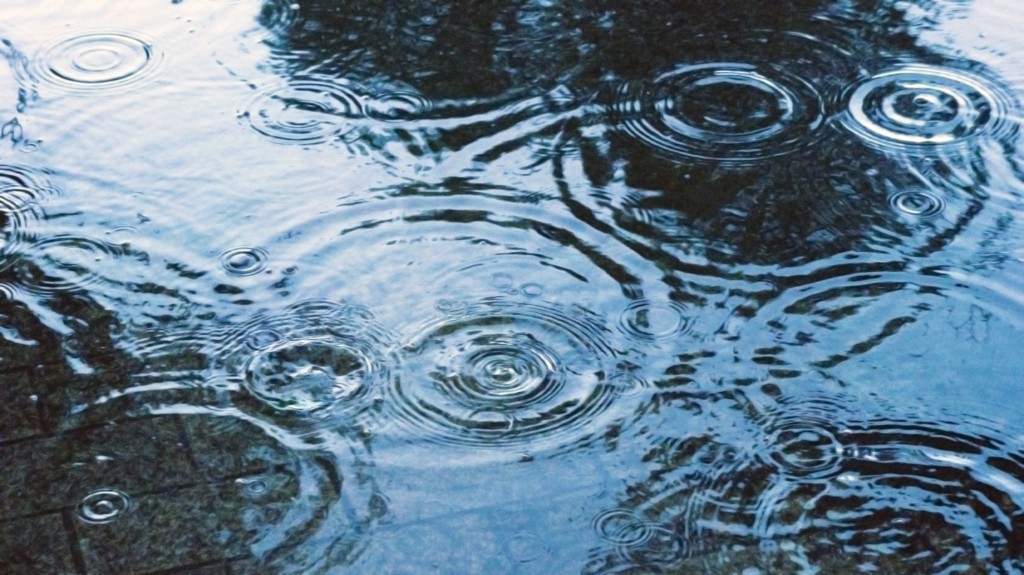 We perfectly understand we need rain in our lives but when it comes to traveling, we hate rainy days.

You can’t help but checking the weather forecast before the days of traveling and if the place is very far and special, you worry about the weather more and keep wishing that it will get better and sunny.

I perfectly understand that.

Because my friends and I planned to visit Aso after months and the weather forecast never changed to anything better. But I have to tell you that Aso is amazing even on rainy days. Or I think I should say that because of rain, Aso gets greener, more vibrant and more attractive.

Let’s get to know it and explore this beautiful waterfall together!

Nishihara-village is located in Aso and 20 kms away from the centre of Kumamoto-city.

There are plenty of untouched nature and clear spring water source. 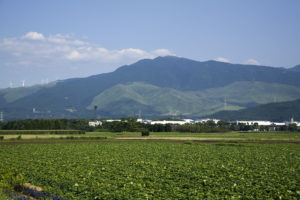 The slogan of Nishihara-village is “水と緑と光の村(Village of water, nature and light)”. Thanks to the rich nature, many people have been attracted by Nishihara-village and migrated there. It’s close to Kumamoto Airport and the gateway to Minami-Aso(means south Aso) so people enjoy visiting and going for a drive.

On 16th April 2016, the magnitude-7.3 earthquake hit Nishihara-village very heavily. In one area, called Oogirihata-area, 94% of houses were damaged and 88% were completely collapsed. 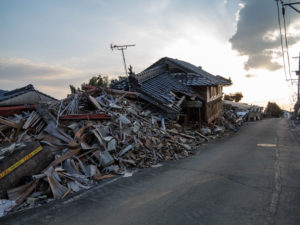 At that time, there were chaos all over but still people helped each other and most of them have decided to live there because Nishihara-village is their home.

Nishihara-village represents us the beautiful changes through a year.

“白糸(Shiraito)” means white strings in Japanese. People named it from the architecture of the water falling down like white strings.

To be honest, we didn’t plan to visit there. I found the sign on the way to Minami-Aso(South-Aso) and because my friends love waterfalls, we dropped by it.

There is a parking lot near the entrance. 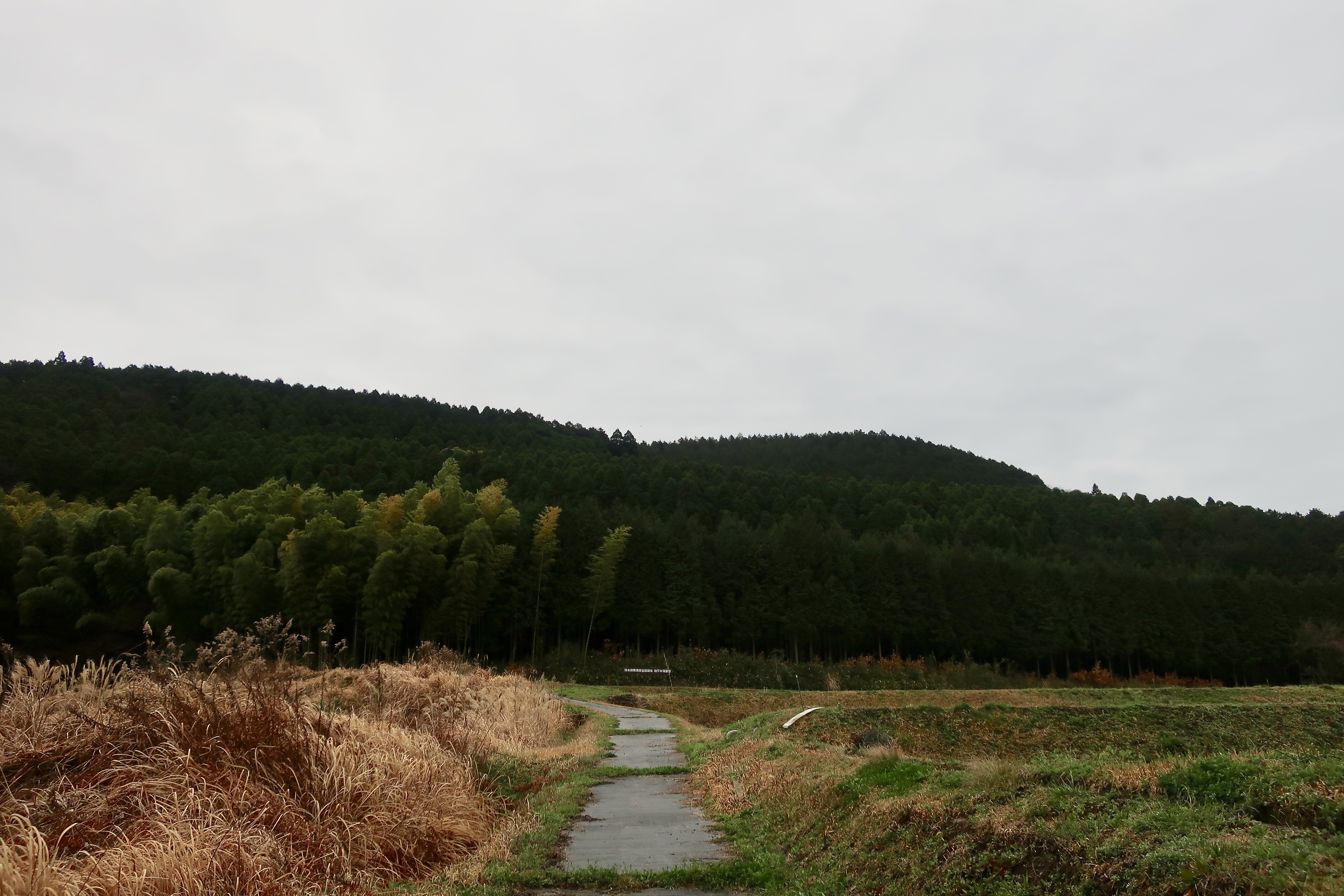 As soon as I got out of my car, I noticed how clear the air was. I took a deep breath and felt refreshed instantly. 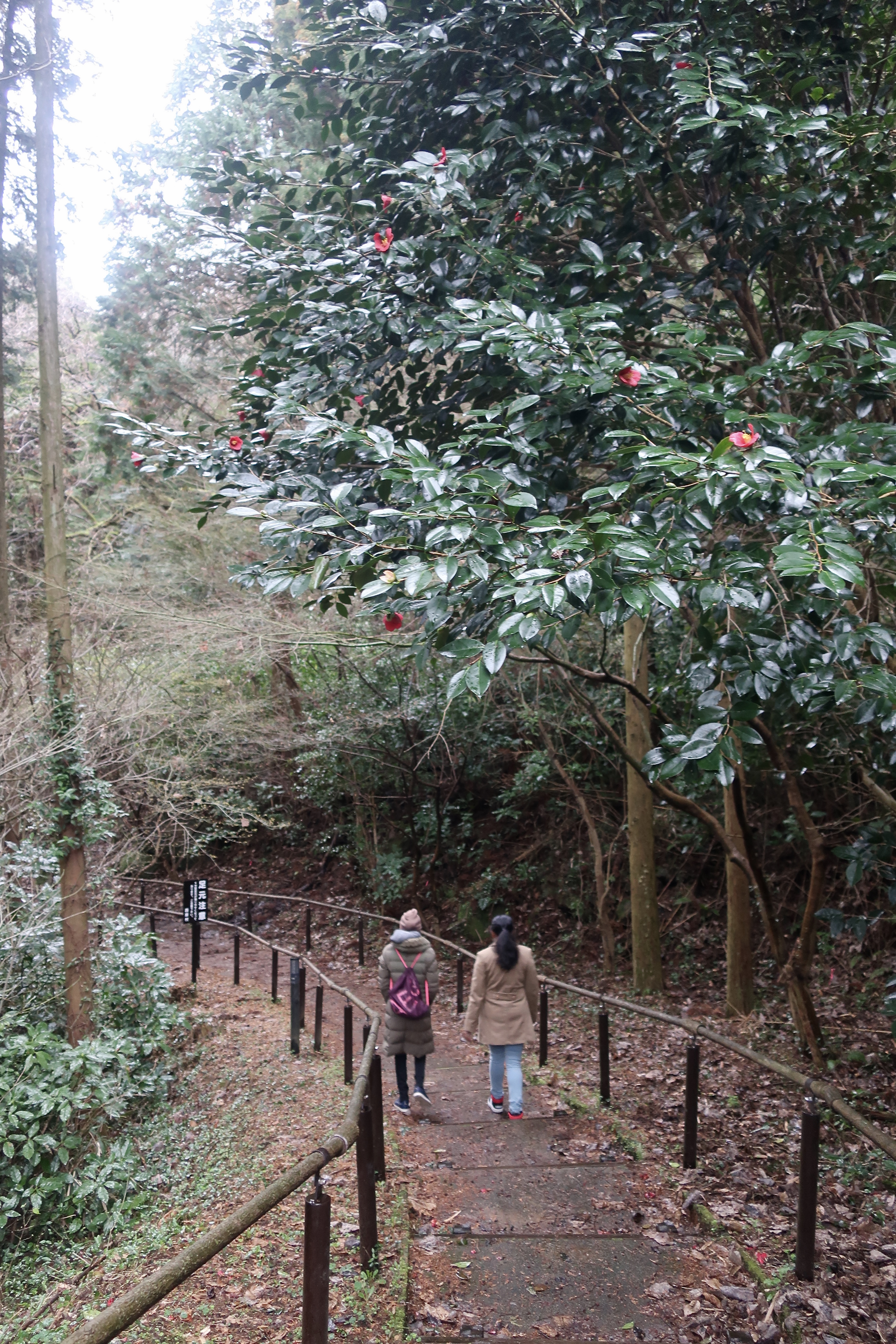 We walked along the path and as soon as we moved forward, we heard the sound of water falling. 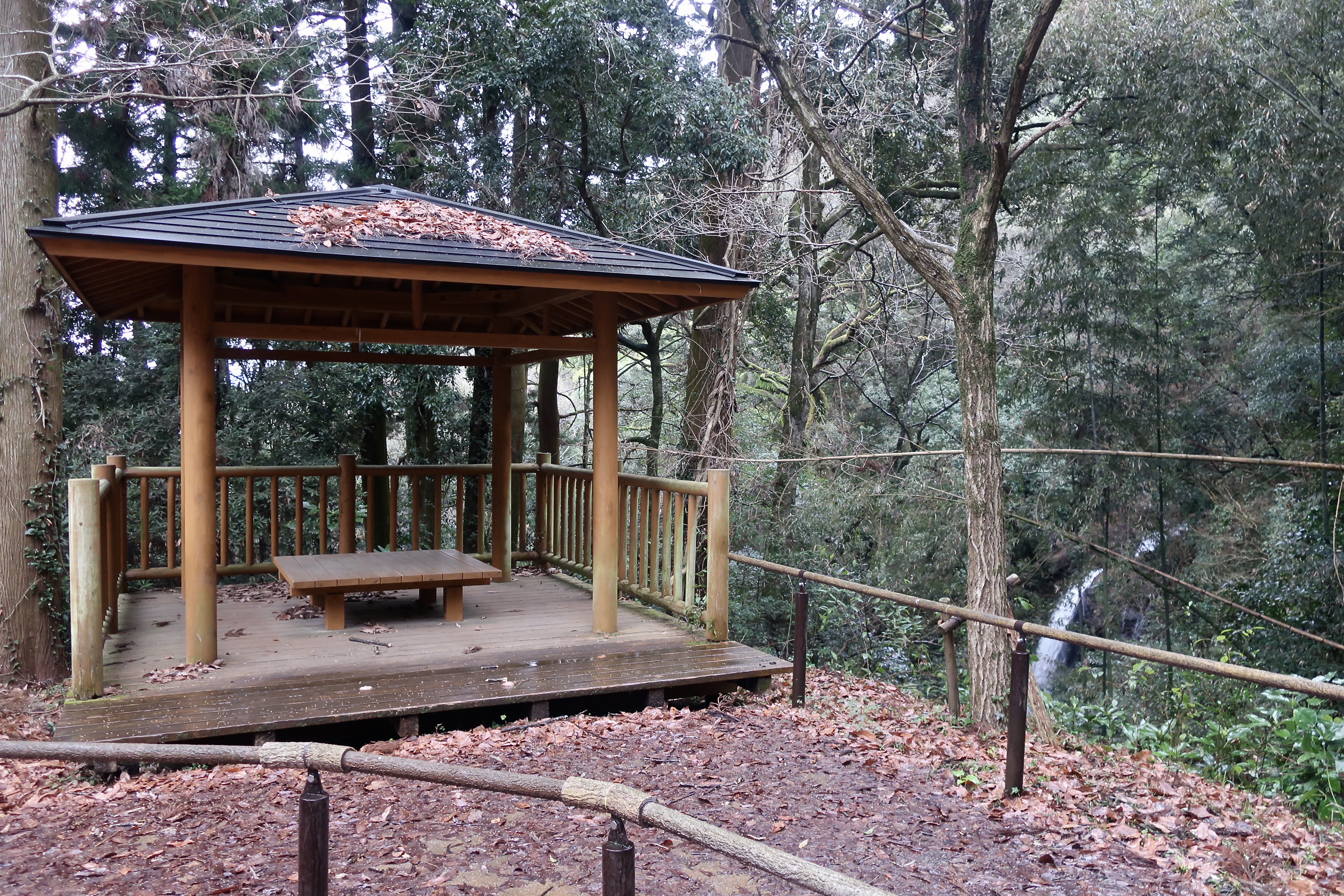 We arrived there before 8 am so as usual, we were the first visitors. 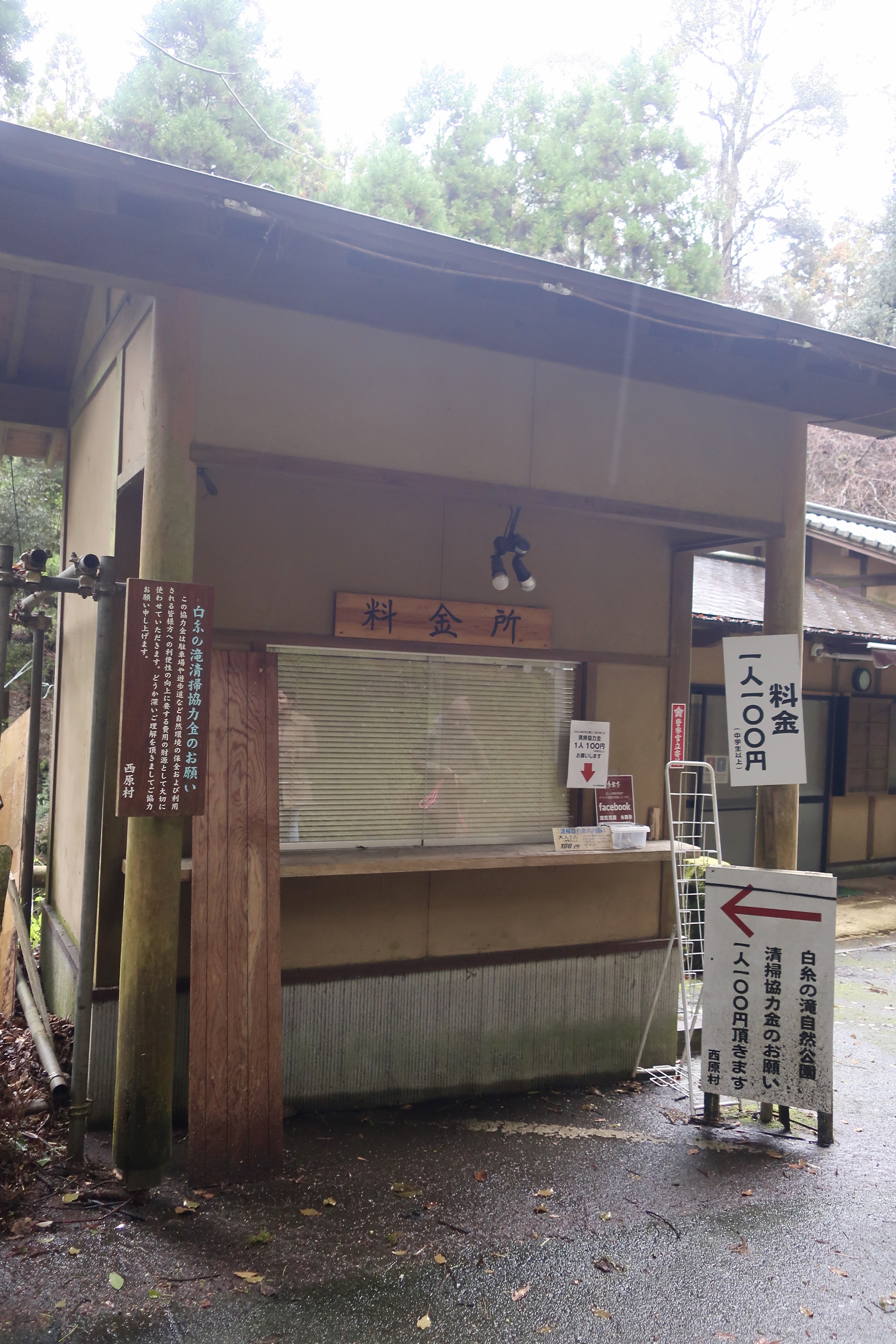 The entrance fee is 100 yen each. Even if there is no one, there is the box so don’t forget to put your money into it. The sign says the fee is used to keep the place maintained. 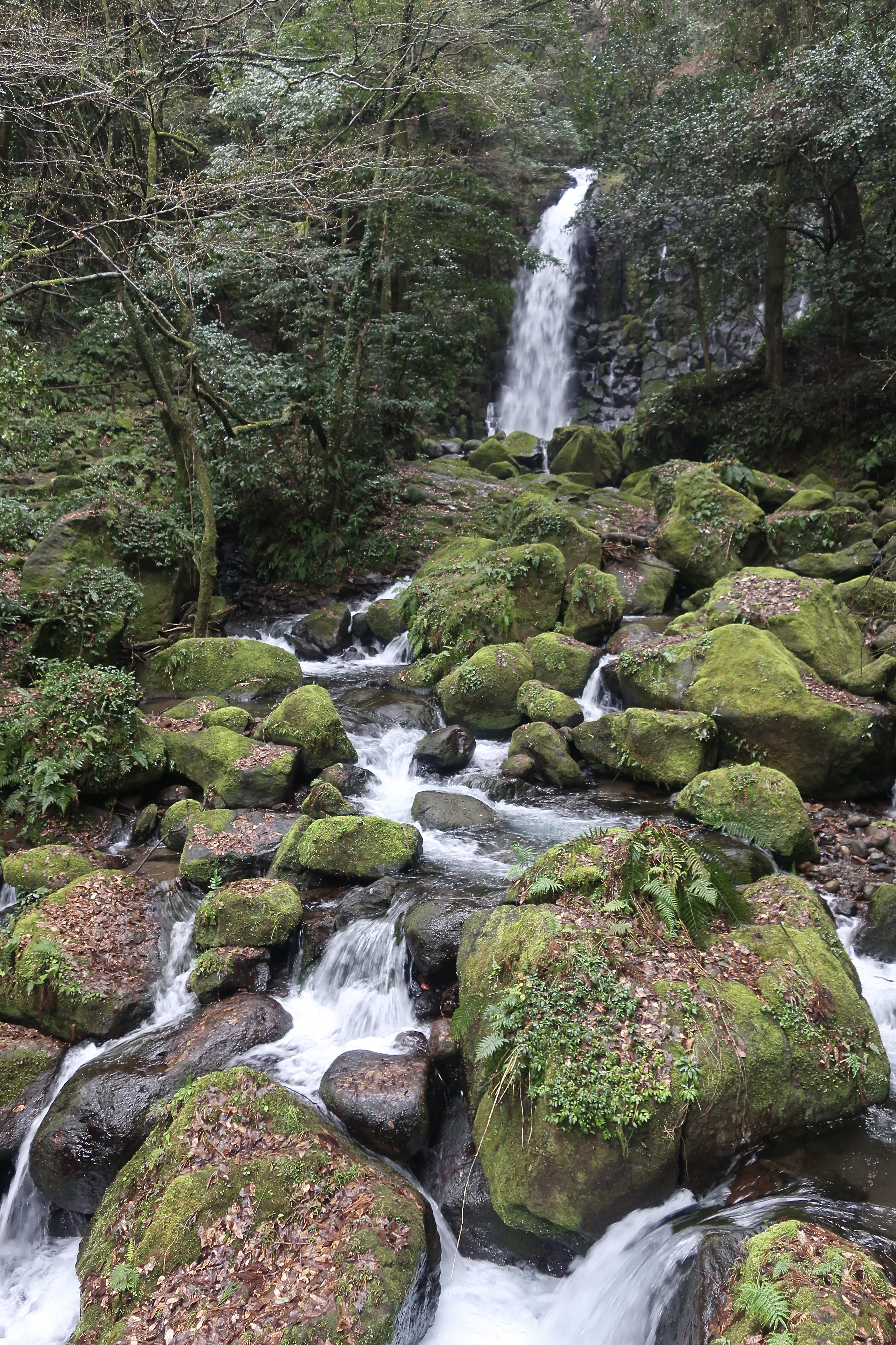 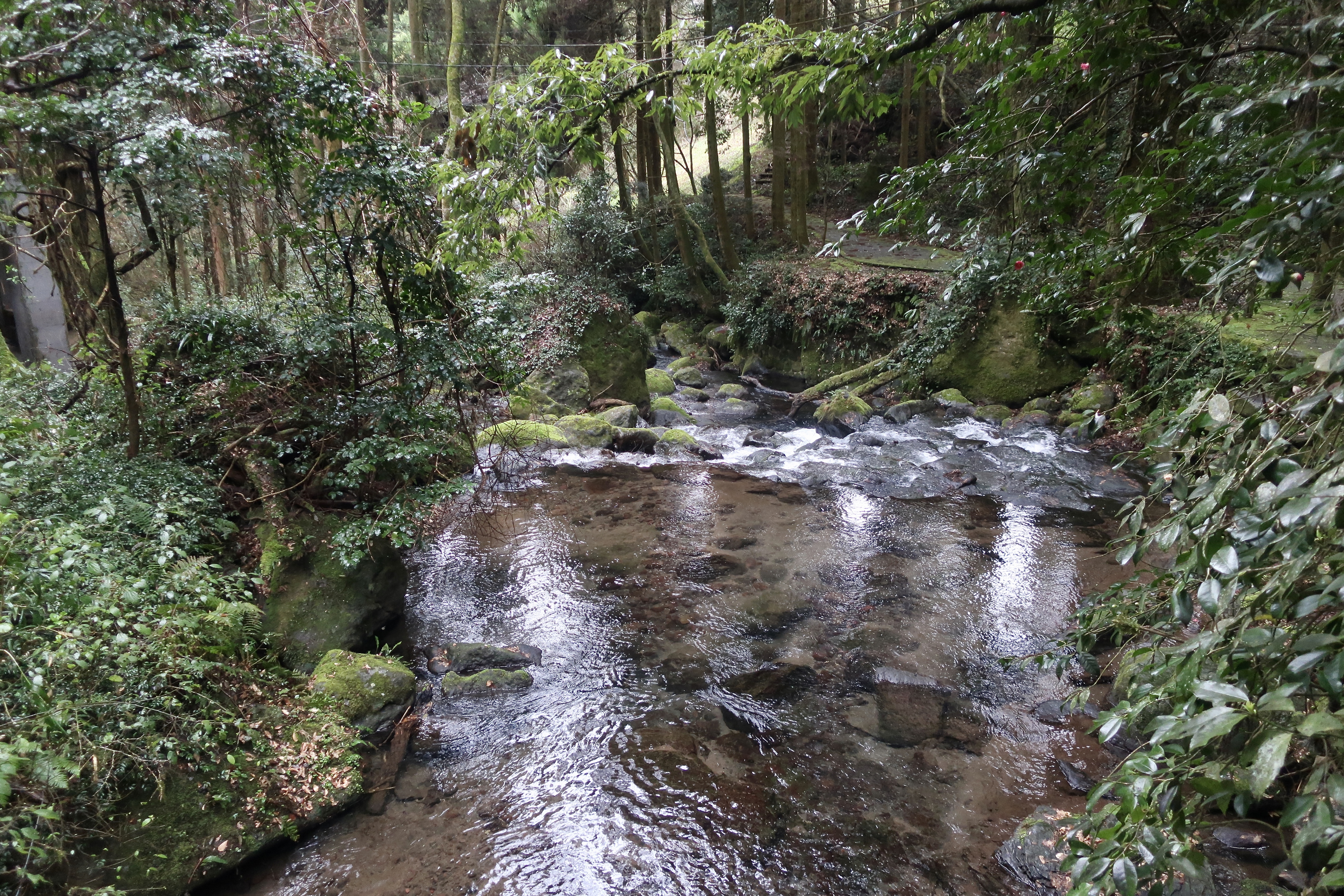 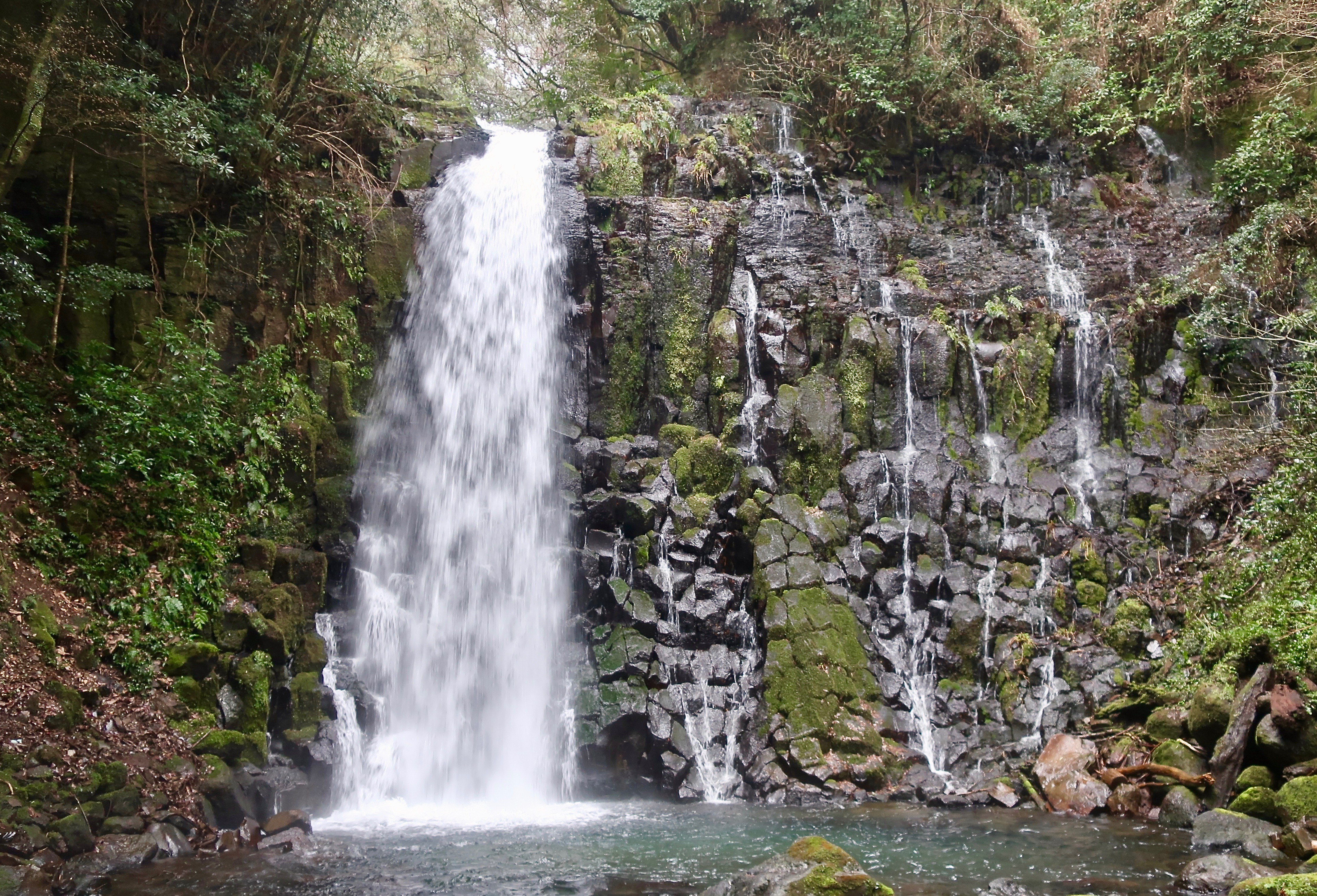 The left part is powerful and the right part, which is described as white strings, is elegant and delicate. Because of the heavy rain, everywhere was greener and clearer.

This is the best part of rainy days, isn’t it?

This waterfall was made by volcanic rock which was born hundreds of thousands of years ago after the eruption. 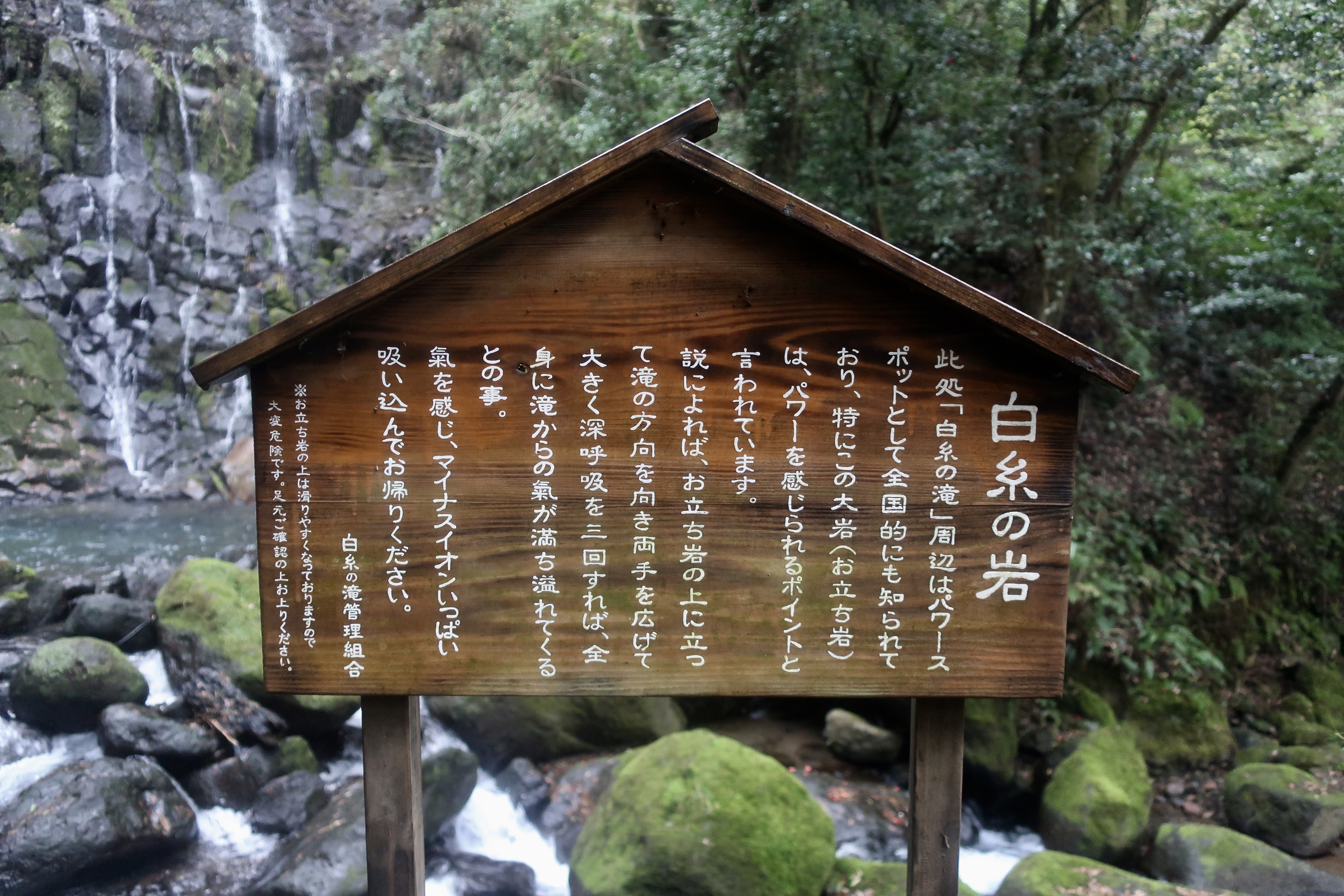 There is the sign in front of the waterfall.

It says that this place is famous for “power spot” and especially the big rock(お立ち岩, means Otachi-iwa rock) in front of the waterfall is the spot where we can feel the power at most.

It explains that you’ll get the power from the waterfall by standing on the rock facing to the waterfall, opening your arms widely and breathing in and out 3 times.

(Just be careful standing on the rock because it is wet and slippery).

We did each and felt so great! 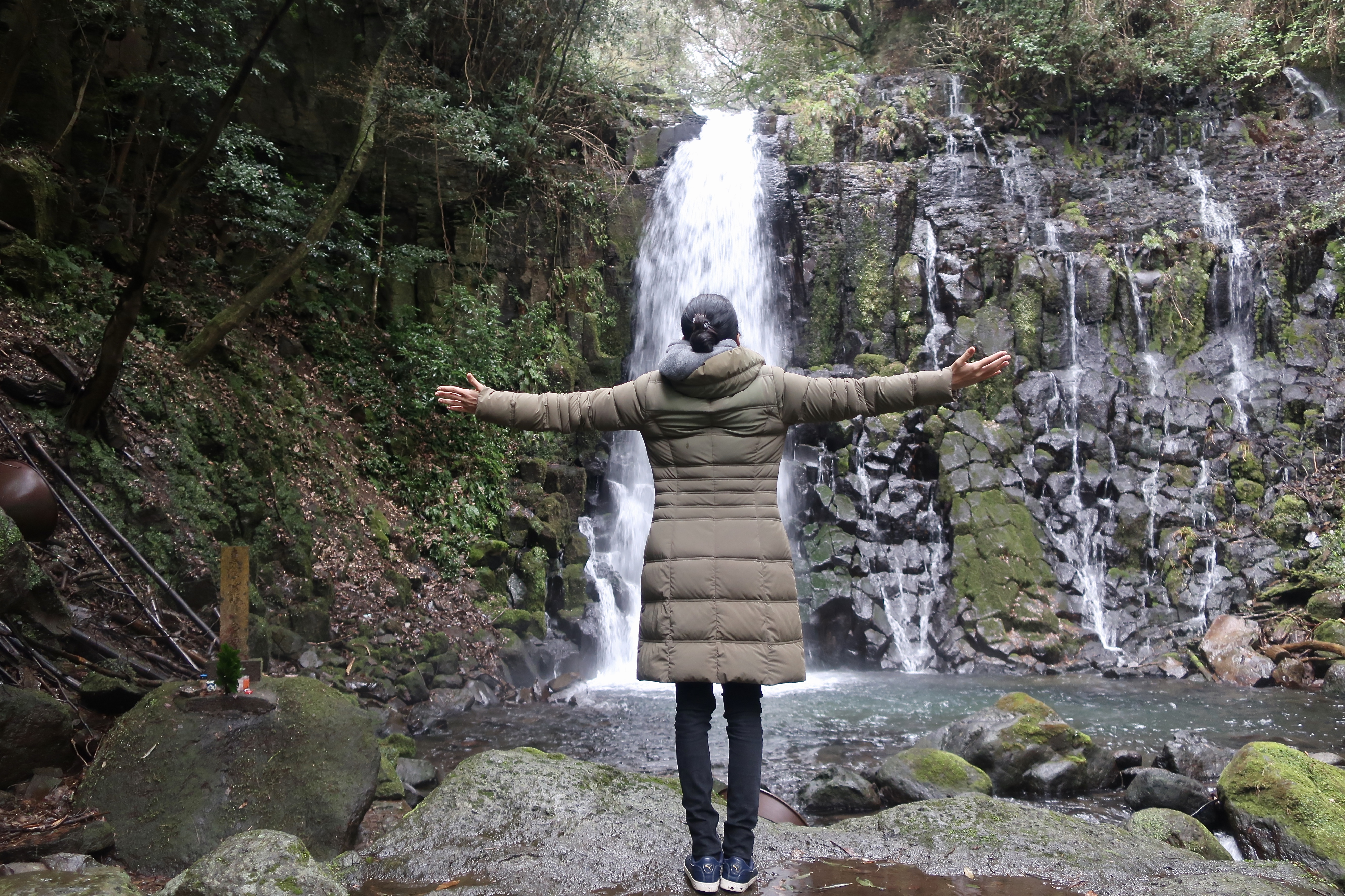 I have no idea of power spot but it was just so great to listen to the sound of the waterfall and feel the coldness of air and having splashes to my face!

After doing it, we were standing in front of it and just hearing the sound and enjoyed the green around it. 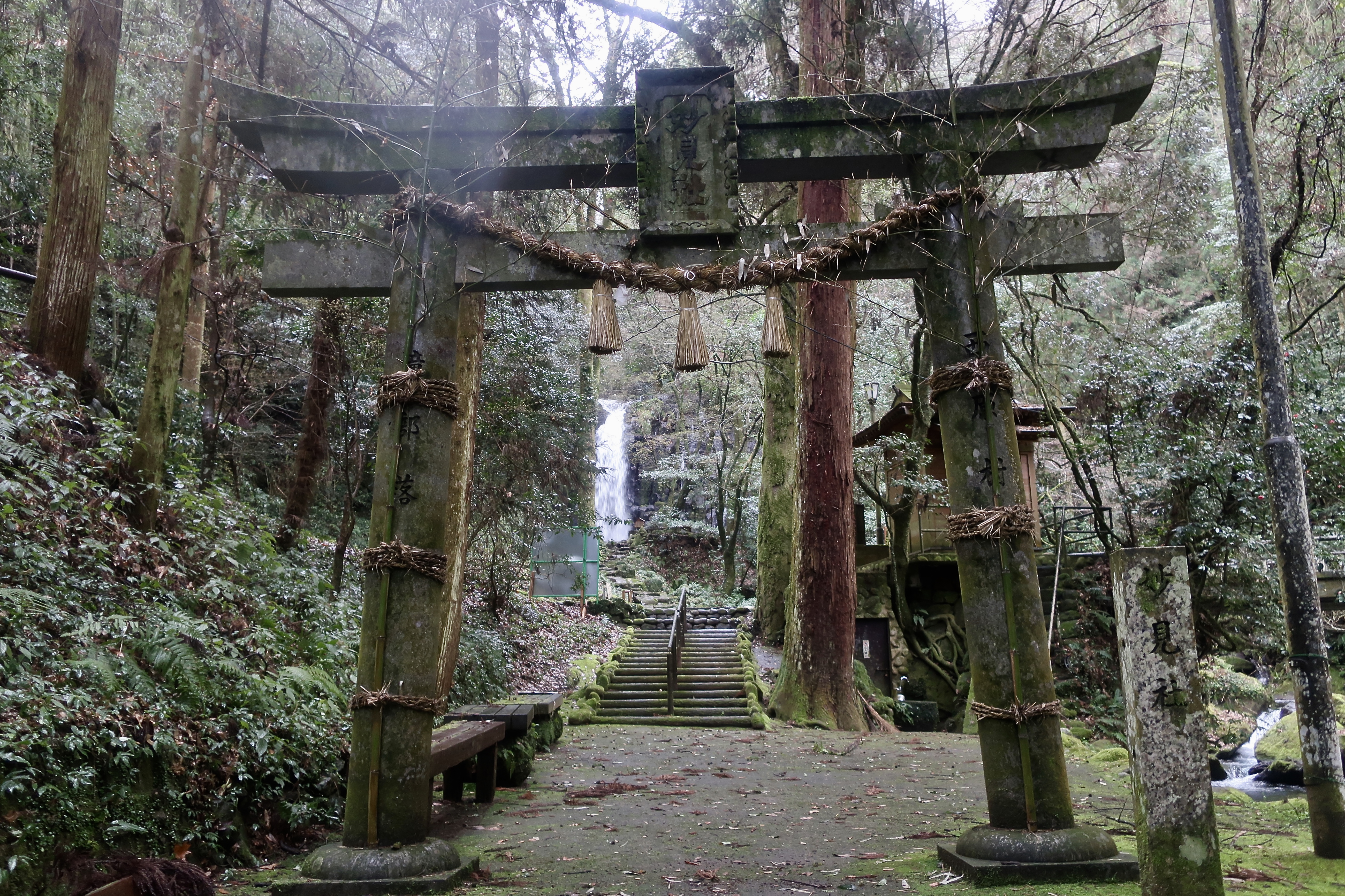 There is a 鳥居(Torii, means Torii gate) near the waterfall.

Torii gate means the entrance to a shrine. On the gate, it says “妙見社(Myouken-sha, means Myouken-sha shrine)” and there is a house of God in between to the waterfall. 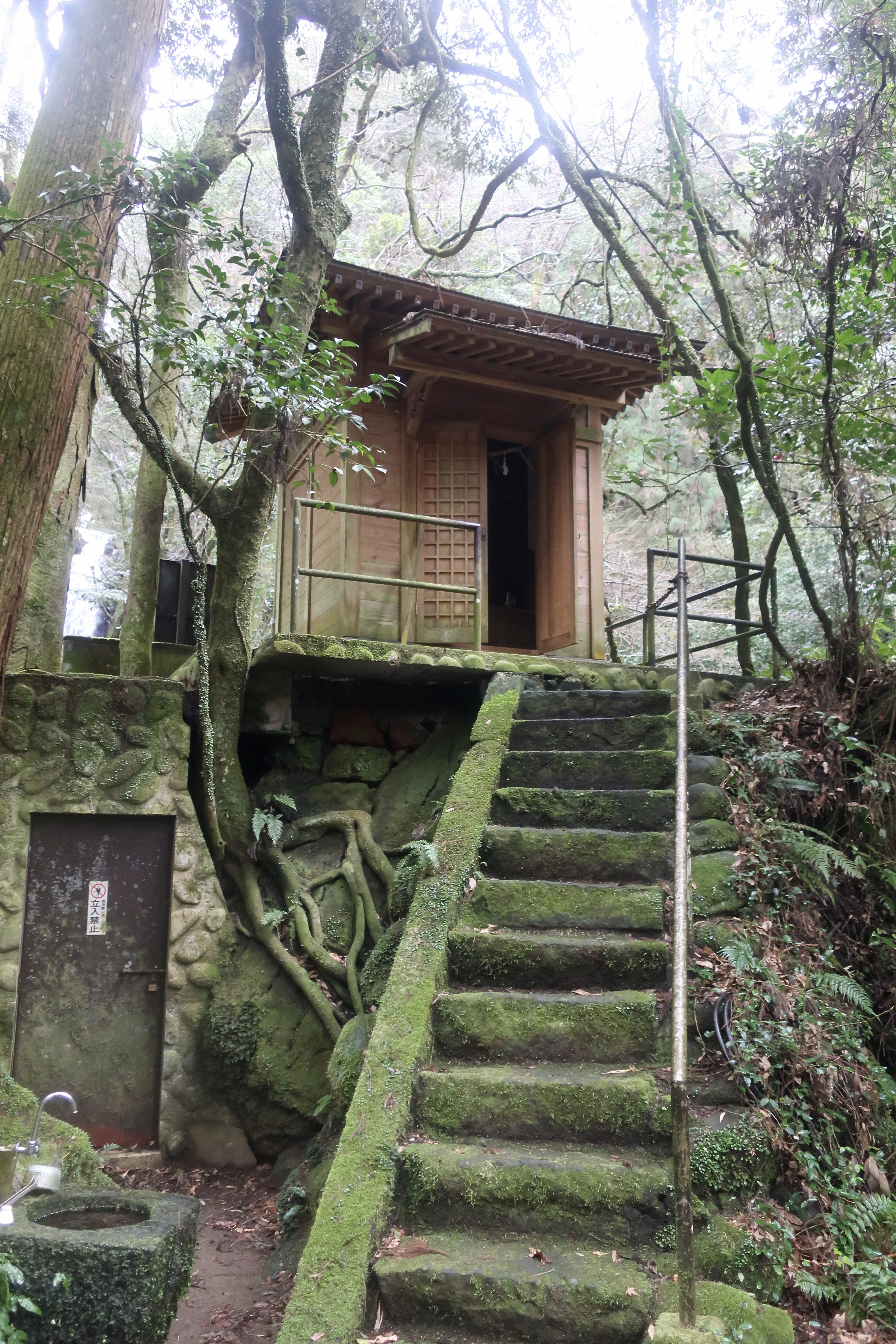 I couldn’t find the information about Myouken-sha shrine but I guess people in the past believed that a God was there because Shiraito waterfall is very beautiful and powerful so they built the house and worshipped it. 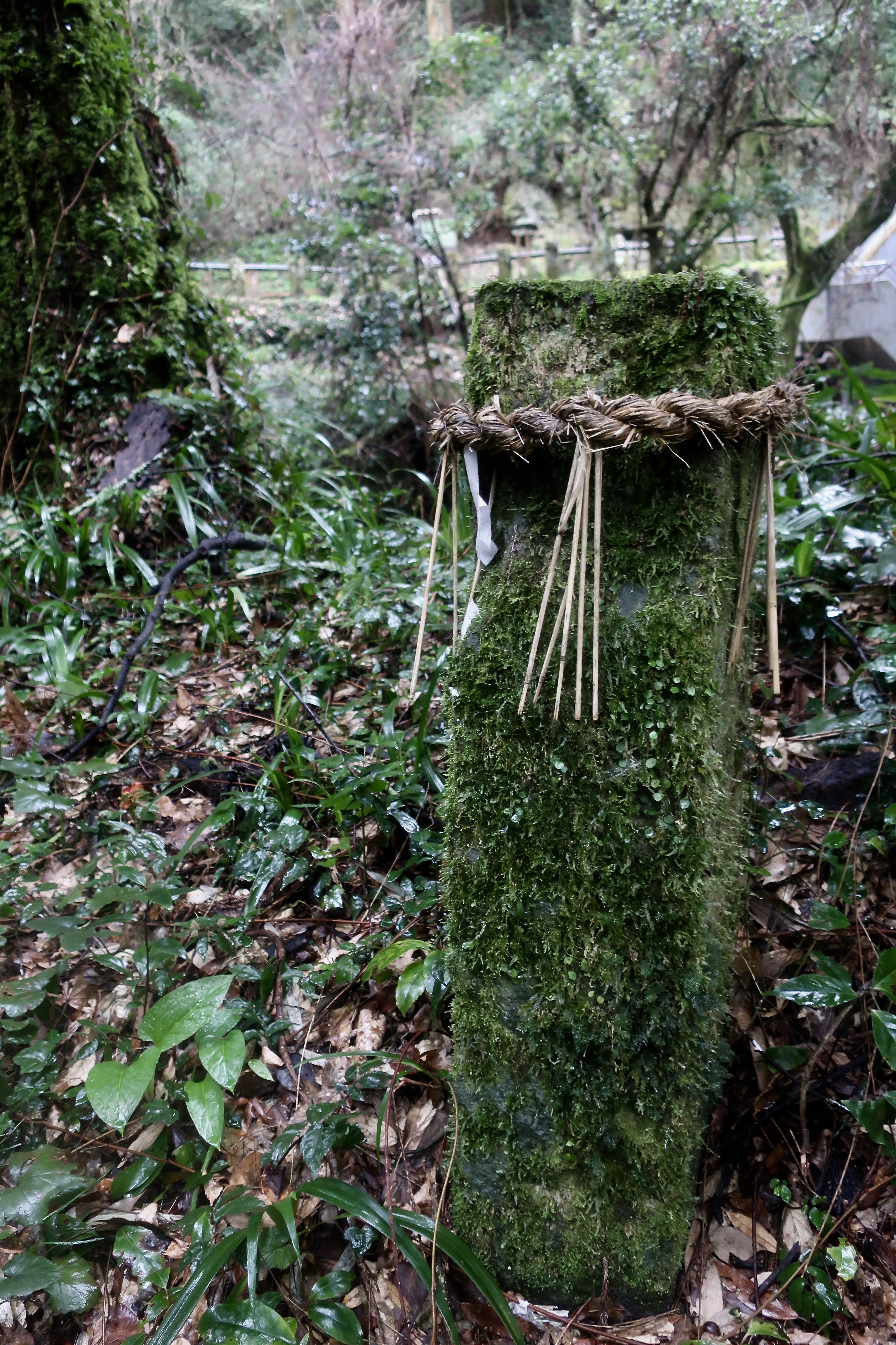 There is the legend of Princess Yorihime.

Once upon a time, there was a man called Hyobu. When he visited Shiraito waterfall, it started to rain very heavily so he got into the small cave until the rain stopped.

When it stopped, the sun started to shine and a beautiful woman suddenly appeared in front of him, like walking on the water.

He felt in love with her in the first sight and soon after they got married.

They were living happily together but one day, Yorihime said she wanted to weave on a loom. After that, she often went out at night. 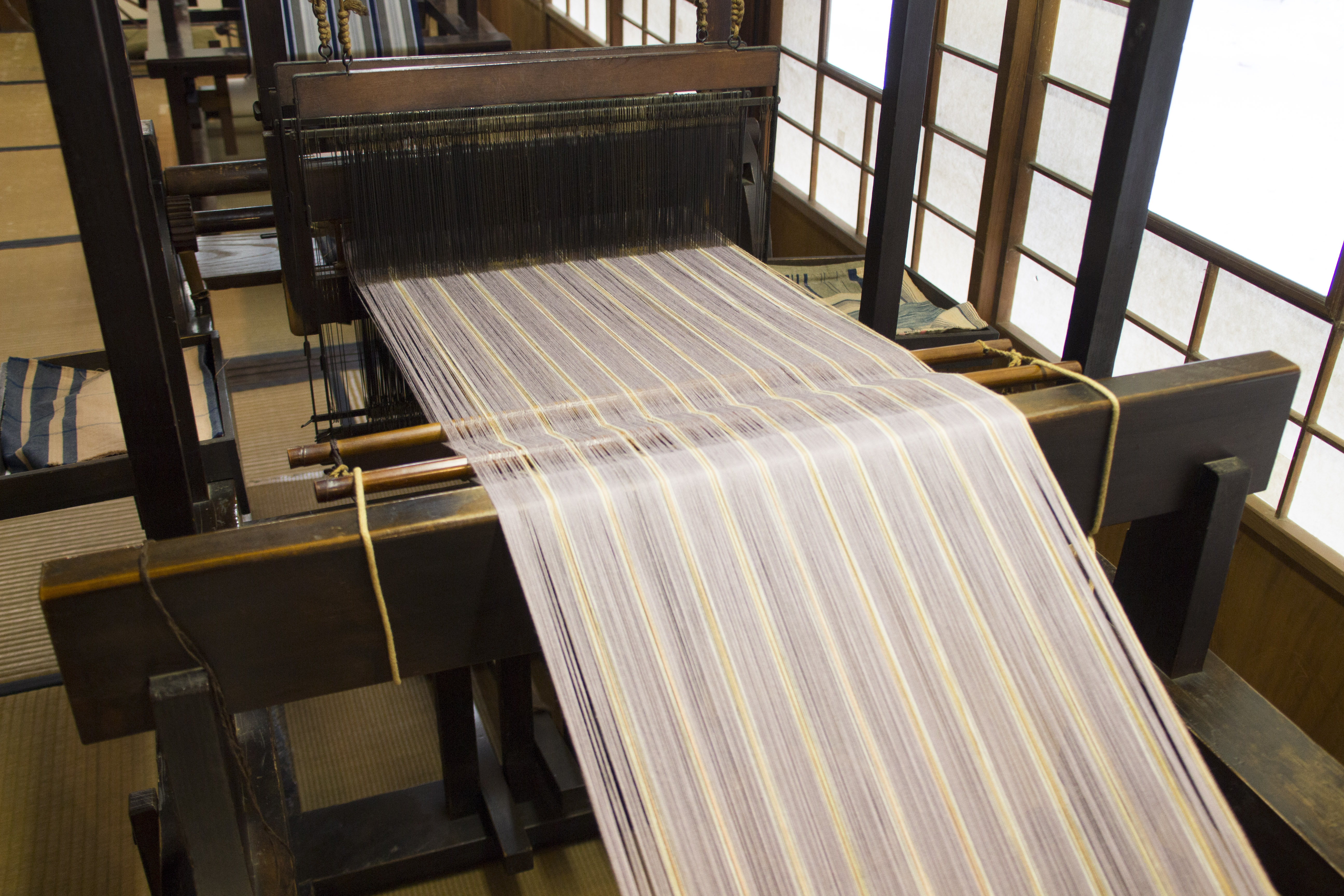 After a while, Hyoubu heard some strange stories from his colleagues. The stories were like they saw a big fire ball and also a beautiful woman with the loom. They chased it and it disappeared in front of Hyoubu’s house. 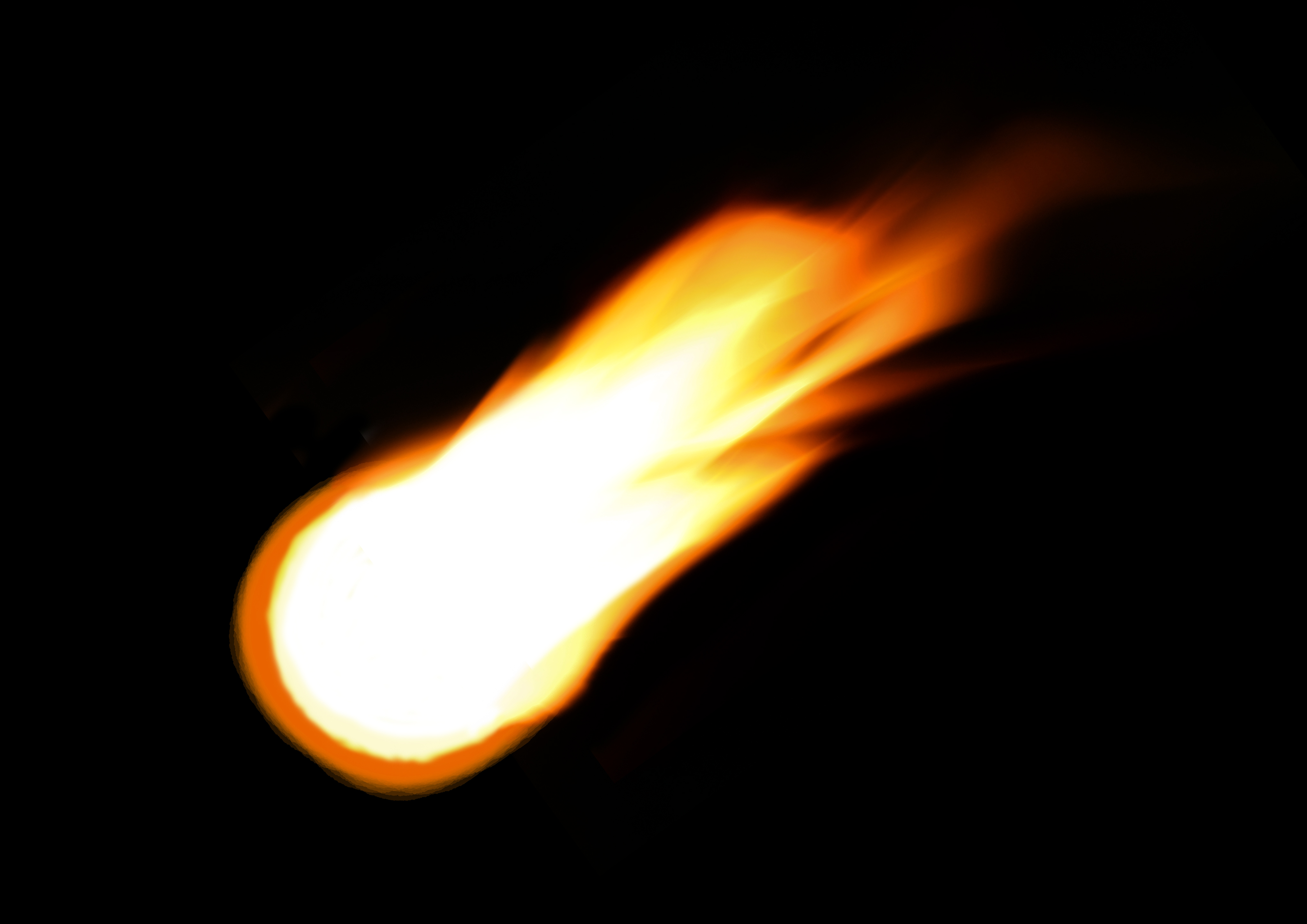 Hyobu questioned Yorihime closely but she kept saying she had no idea.

Even after that, Yorihime kept going out at night so Hyobu got furious and stabbed her with a sword. She ran away and Hyobu tried to chase her but she just disappeared.

In the next morning, Hyobu followed the blood and found a big bleeding dragon in the cave up to Shiraito waterfall. 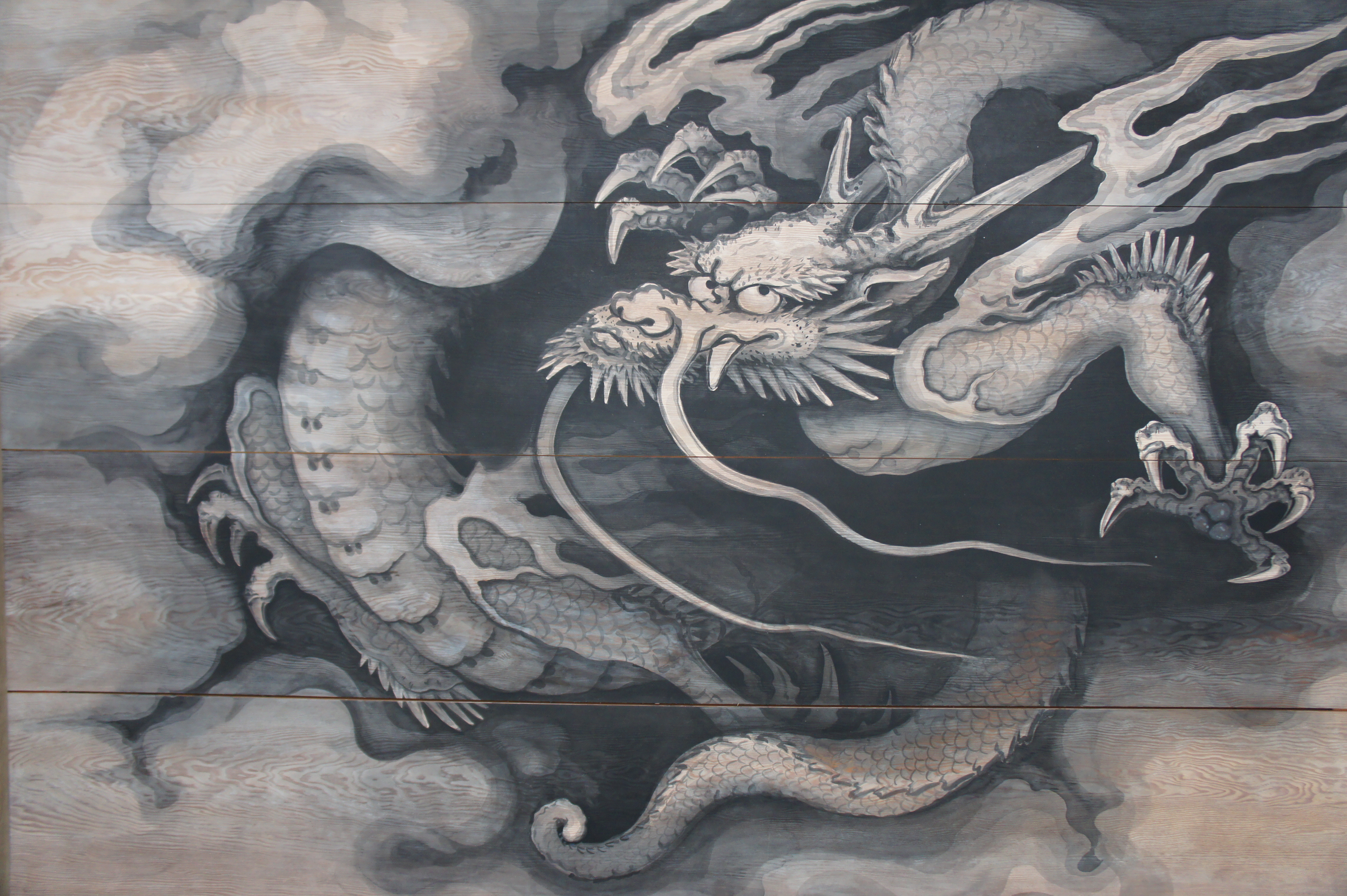 Because of this sad story, Shiraito waterfall is also called “Yorihime waterfall”.

The cave is believed to be on the top of the waterfall so we can’t see it.

Shiraito waterfall is rich in water through a year so you can enjoy it at any time of the year.

During summer, it is lighten up and give another amazing scenery.

In winter, it’s very very cold so monks visit there to have trainings(maybe that’s why there is a stone monument in front of Shiraito waterfall!). 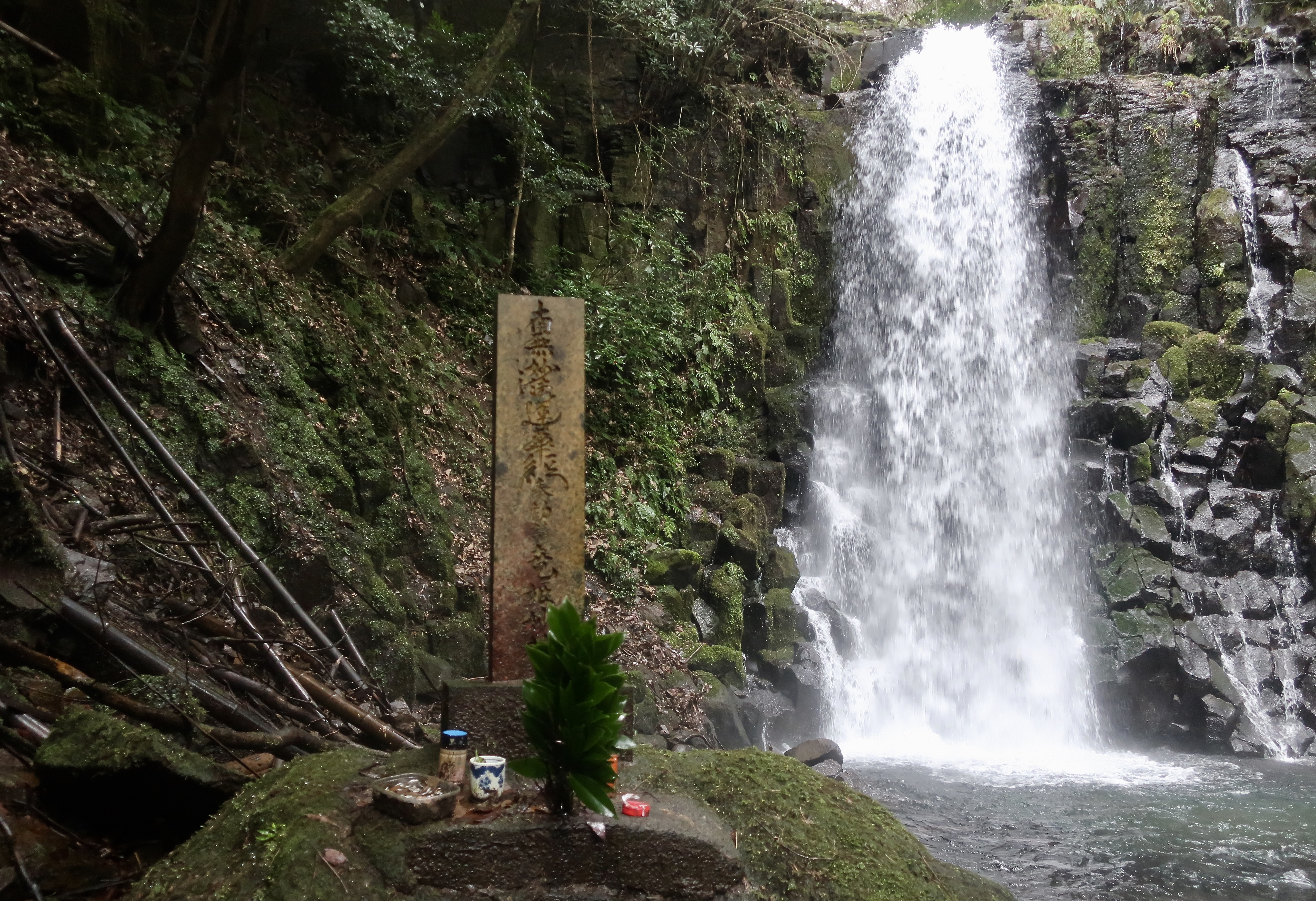 You’ll be relaxed in front of it and get great nature power from it! 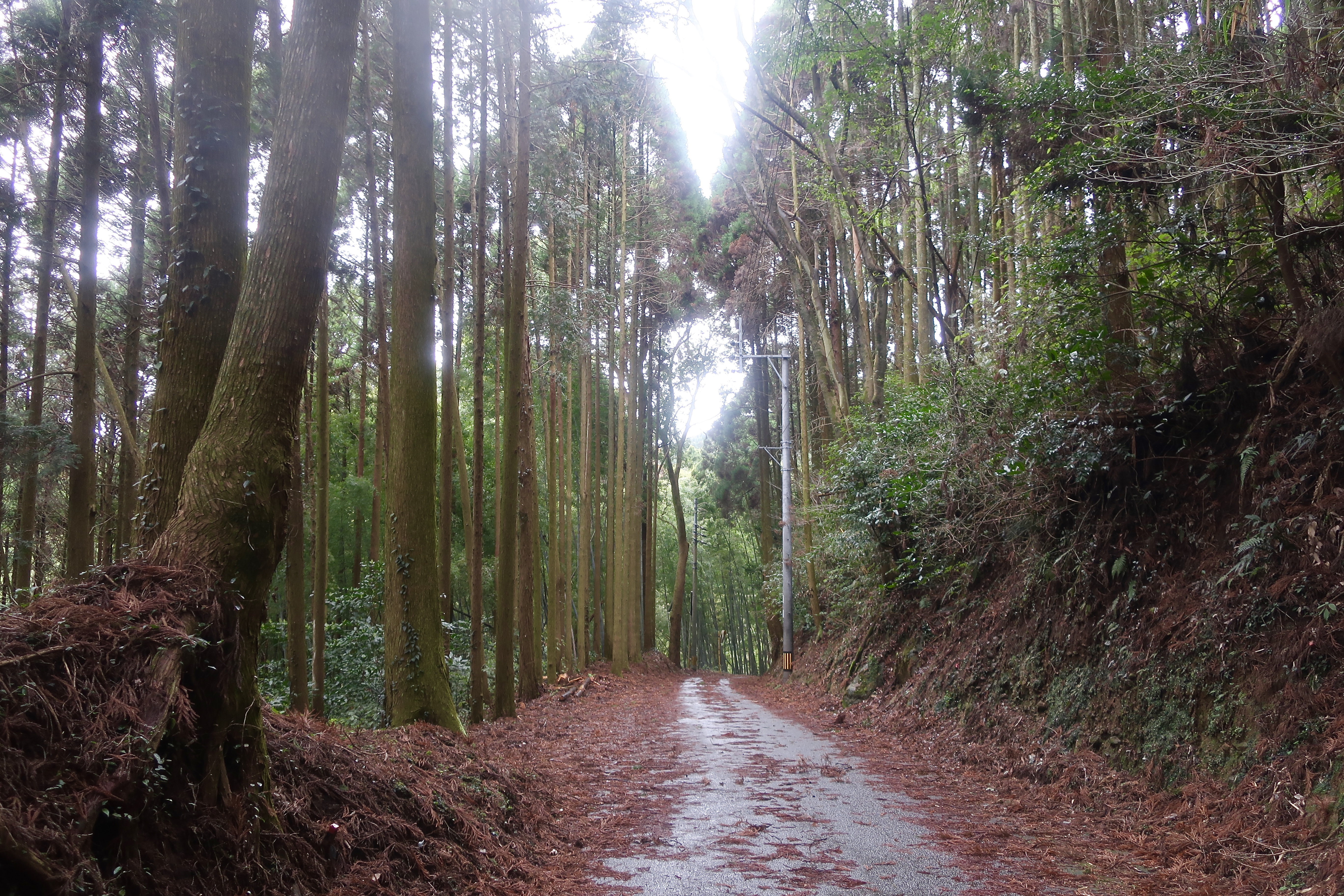