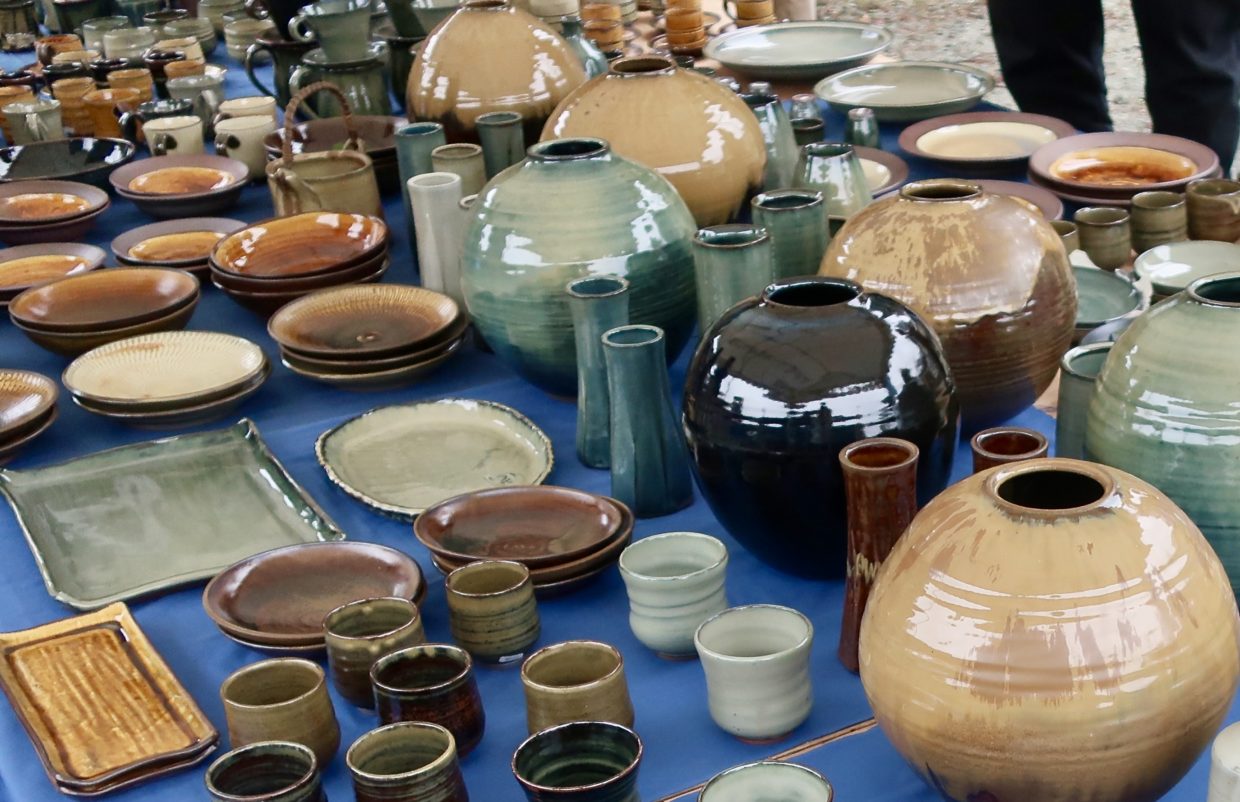 Have you heard of 近藤麻理恵(Marie Kondo)? 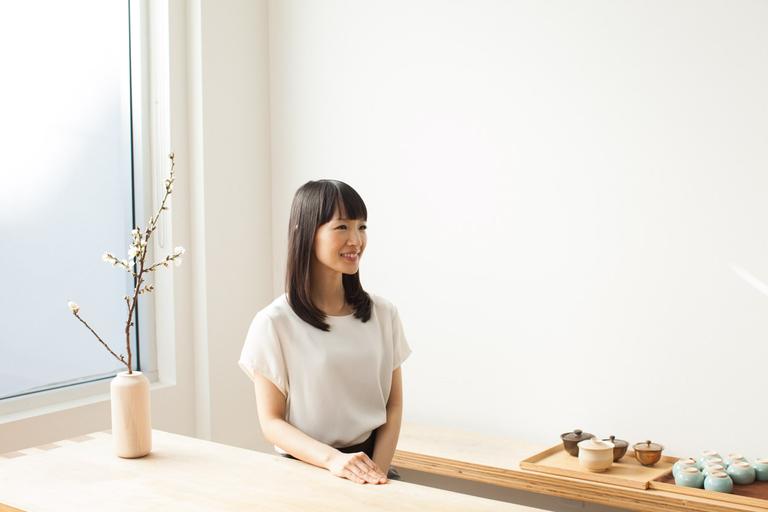 She is a Japanese organizing consultant and her book, “The Life Changing Magic of Tiding Up” has translated and sold in 30 countries. Her unique method of tidying up and the famous phrase “Spark your joy” made her name sparked all around the world. Netflix has started to offer a new series, “Tidying up with Marie Kondo.” since this January and it has attracted people’s interests.

I’m a big fan of her and I’d say I’m an organized person and prefers to have less things in my apartment.

But there is one thing that I can’t resist. 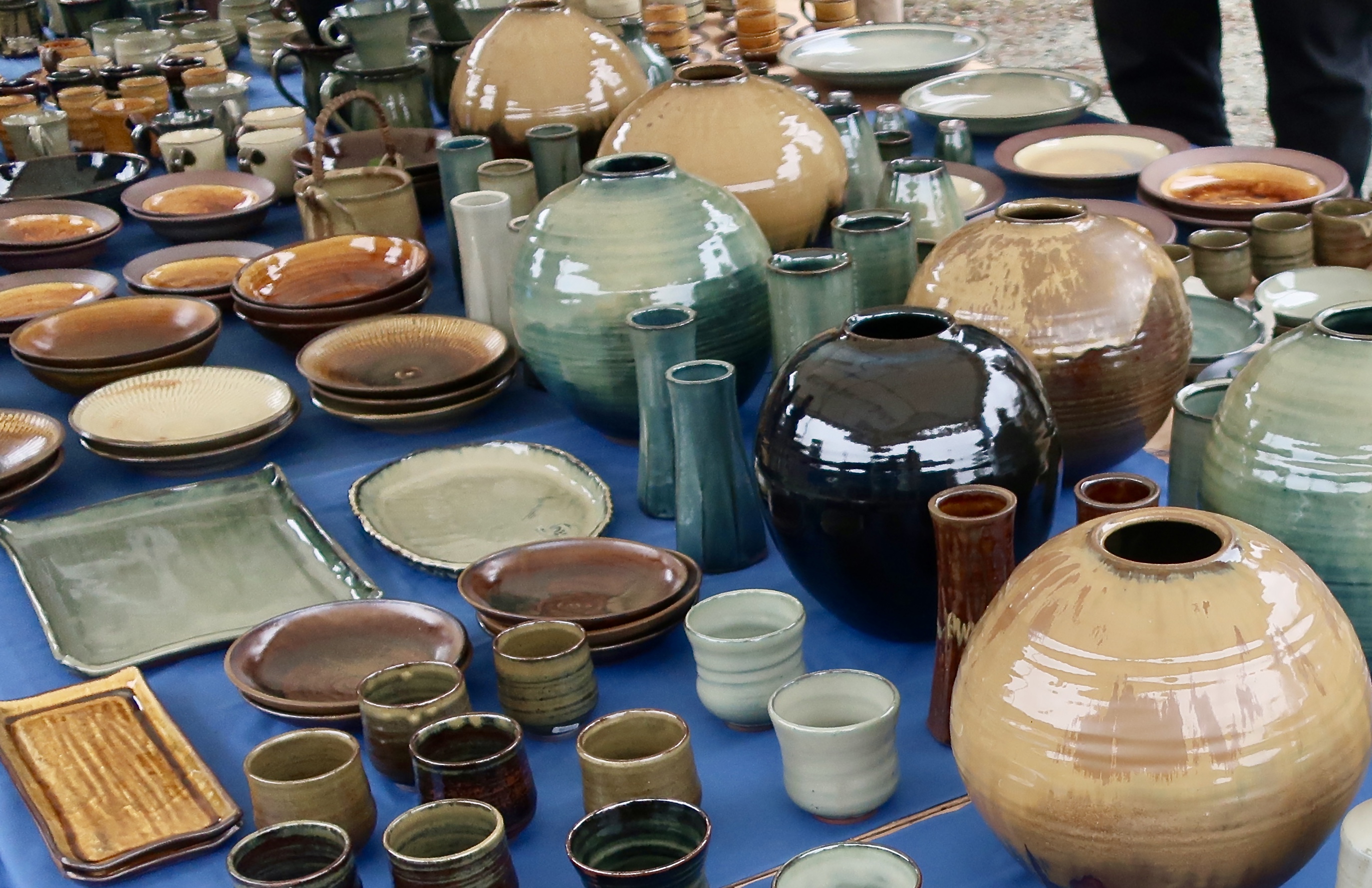 I just don’t buy a lot. I take time and selectively choose the one which sparks my joy. 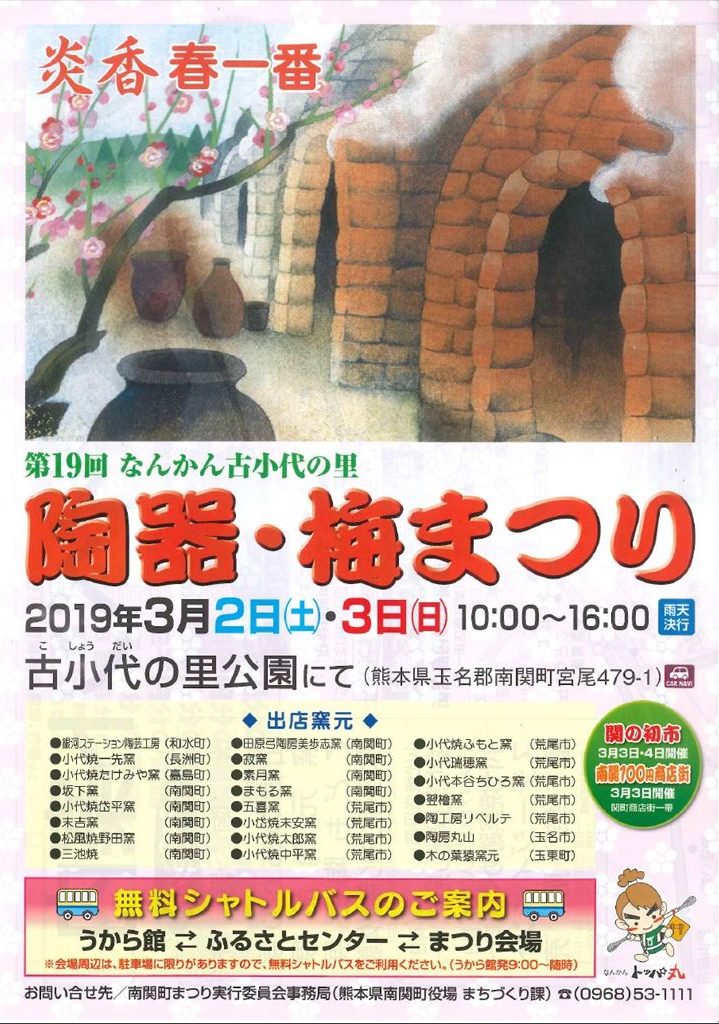 It’s like a dream festival for me and I’ve longed to join it.

Especially, Shoudai-yaki pottery is famous and being registered as 伝統工芸品(Dentou kougei-hin, means Traditional Craft) in Japan. 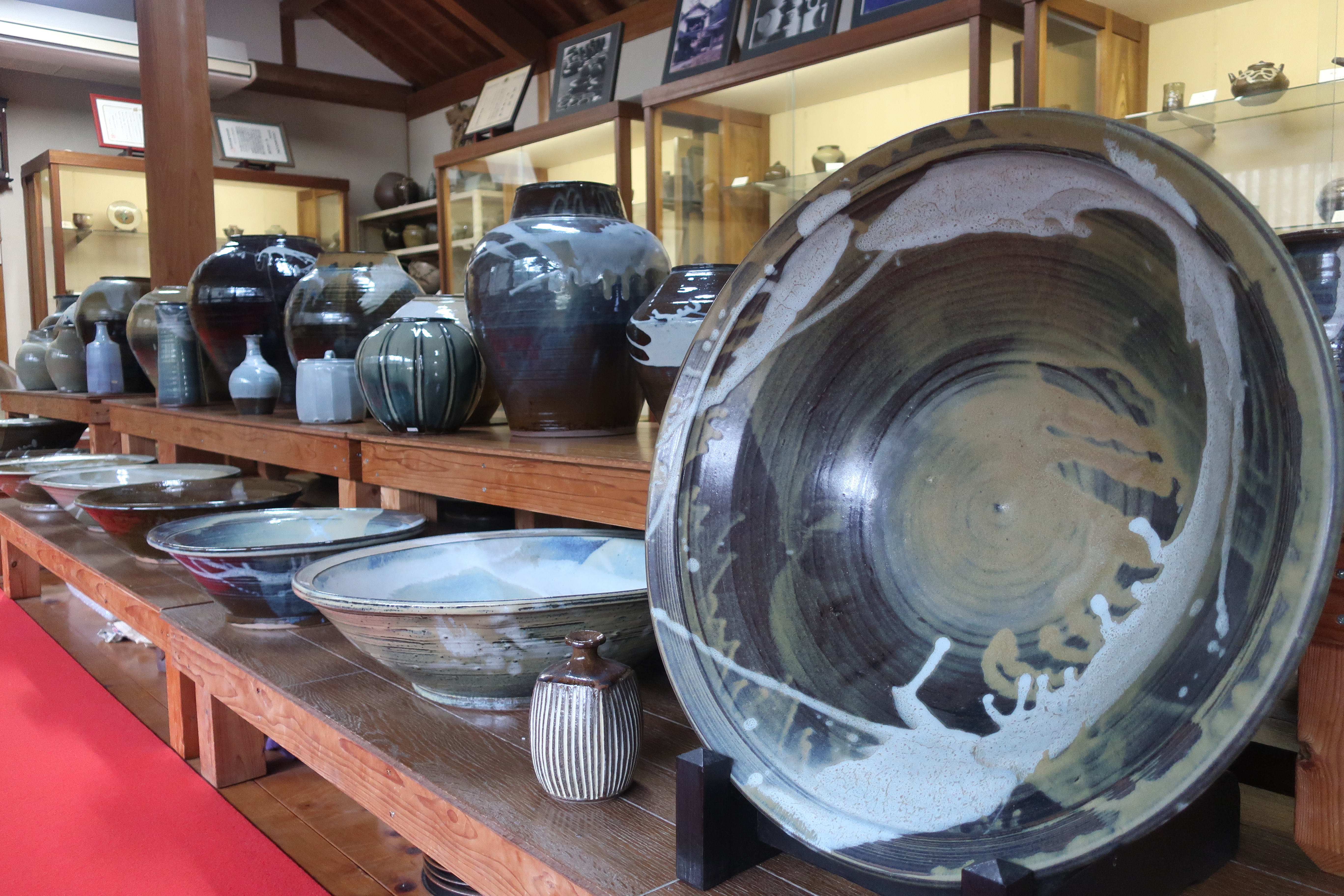 They flourished because of the protection by the local government ruled by Hosokawa family.

Shoudai-yaki pottery has been appealing to many people, not just because it’s beautiful but also it’s practical and based on locals lives.

Let’s learn about Shoudai-yaki pottery and see how the festival was.

About traditional Shoudai-yaki pottery that Kumamoto is proud of.

Shoudai-yaki pottery was first made about 400 years ago at the foot of 小岱山(Shoudai-san, means Mt.Shoudai) which is in the northern part of Kumamoto.

When 細川綱利(Tsunatoshi Hosokawa), who used to rule one part of Fukuoka, was ordered to govern Kumamoto, he took some pottery crafts men with him.

Hosokawa family was very famous for being cultured and especially well-known for one of the master of tea ceremony. So in the early days, Shoudai crafts men were mainly ordered to bake tea pots for matcha.

Gradually, they started to make big products such as vases and jars and shifted to smaller ones such as plates, bowls and cups etc. which we can see now. 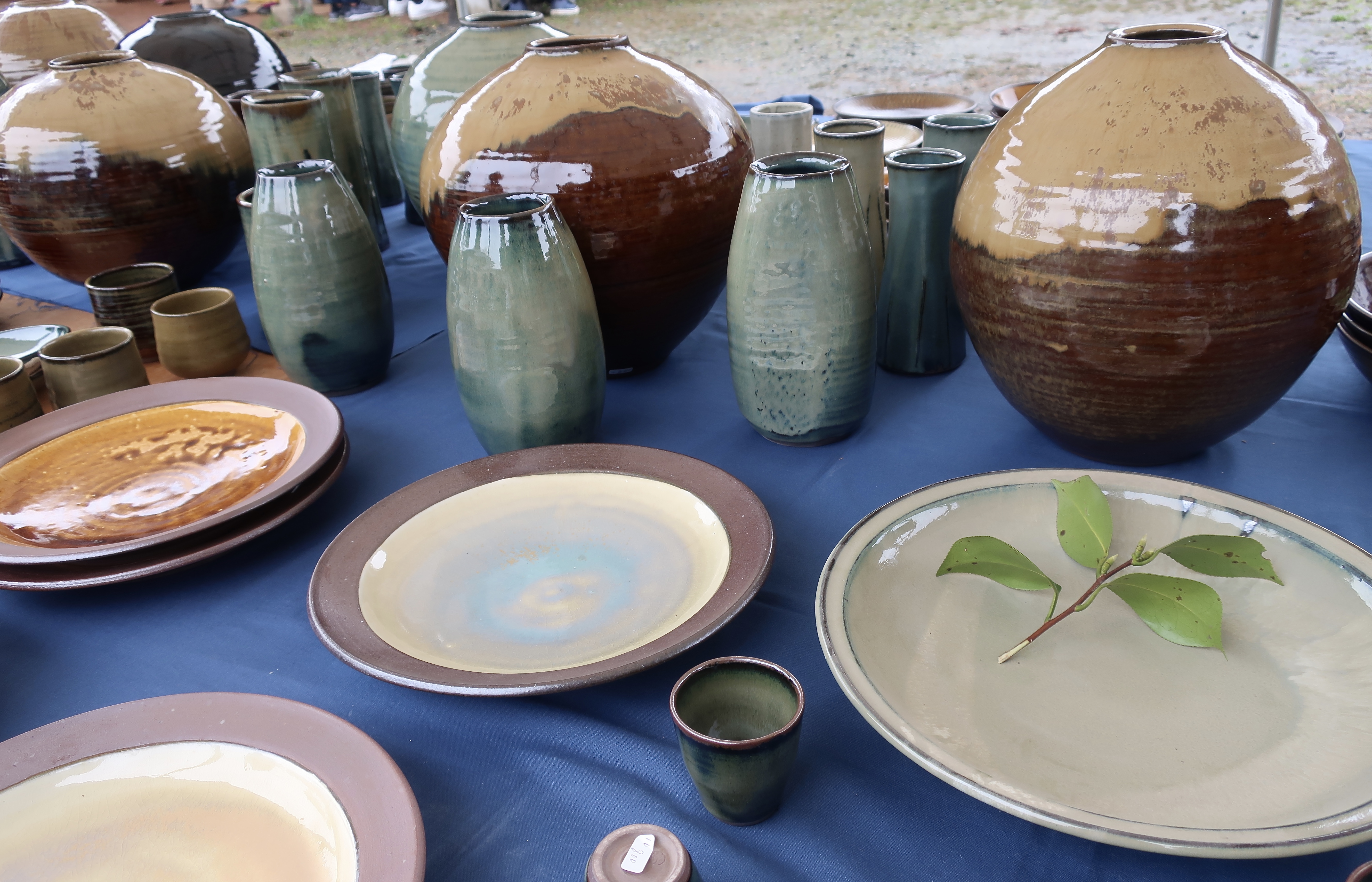 Around Mt.Shoudai, they could get good quality of soil and bamboo, which are used for glaze and fuel. 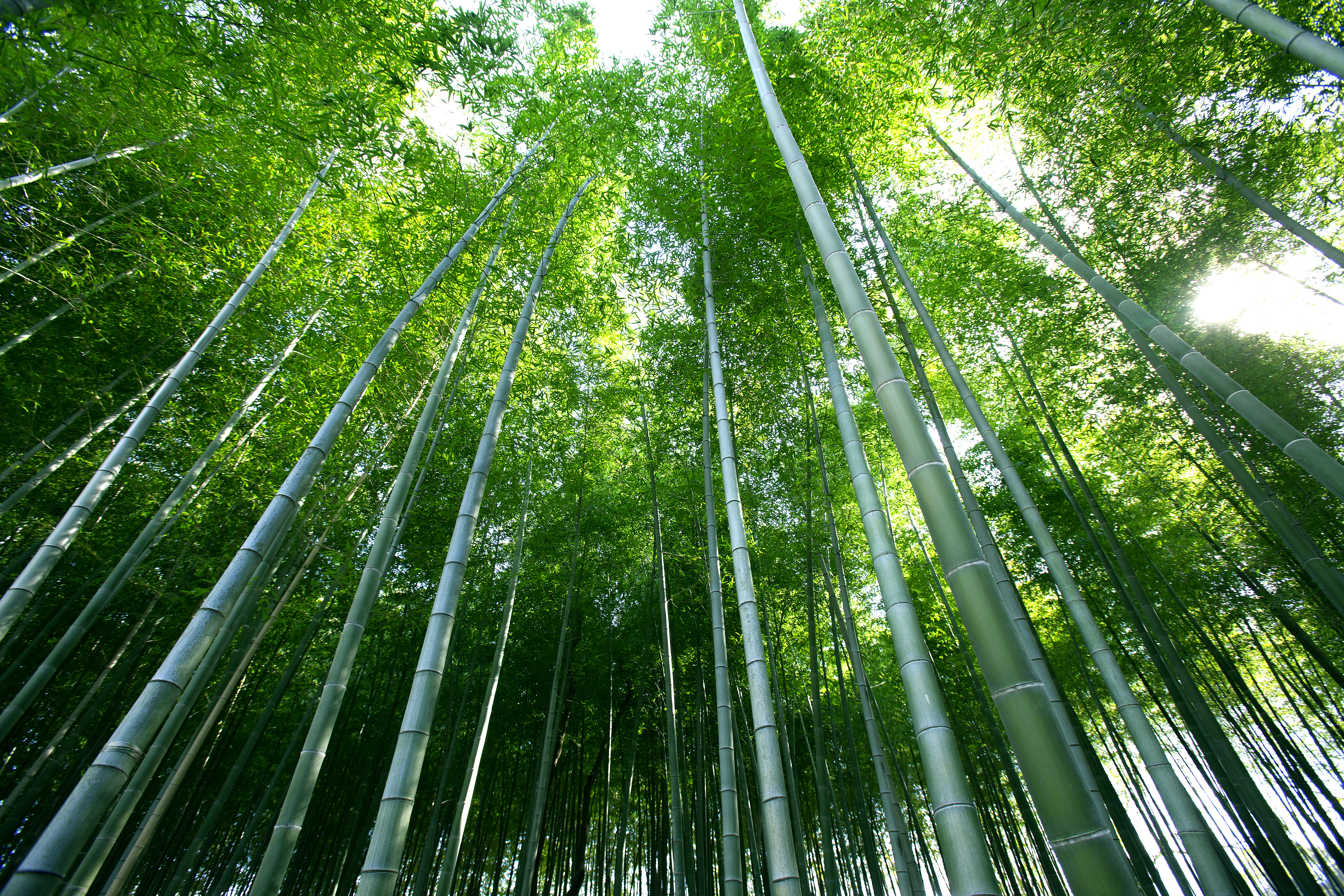 Shoudai-yaki pottery is powerful and quaint so it’s often nicknamed as “Wild Samurai”. 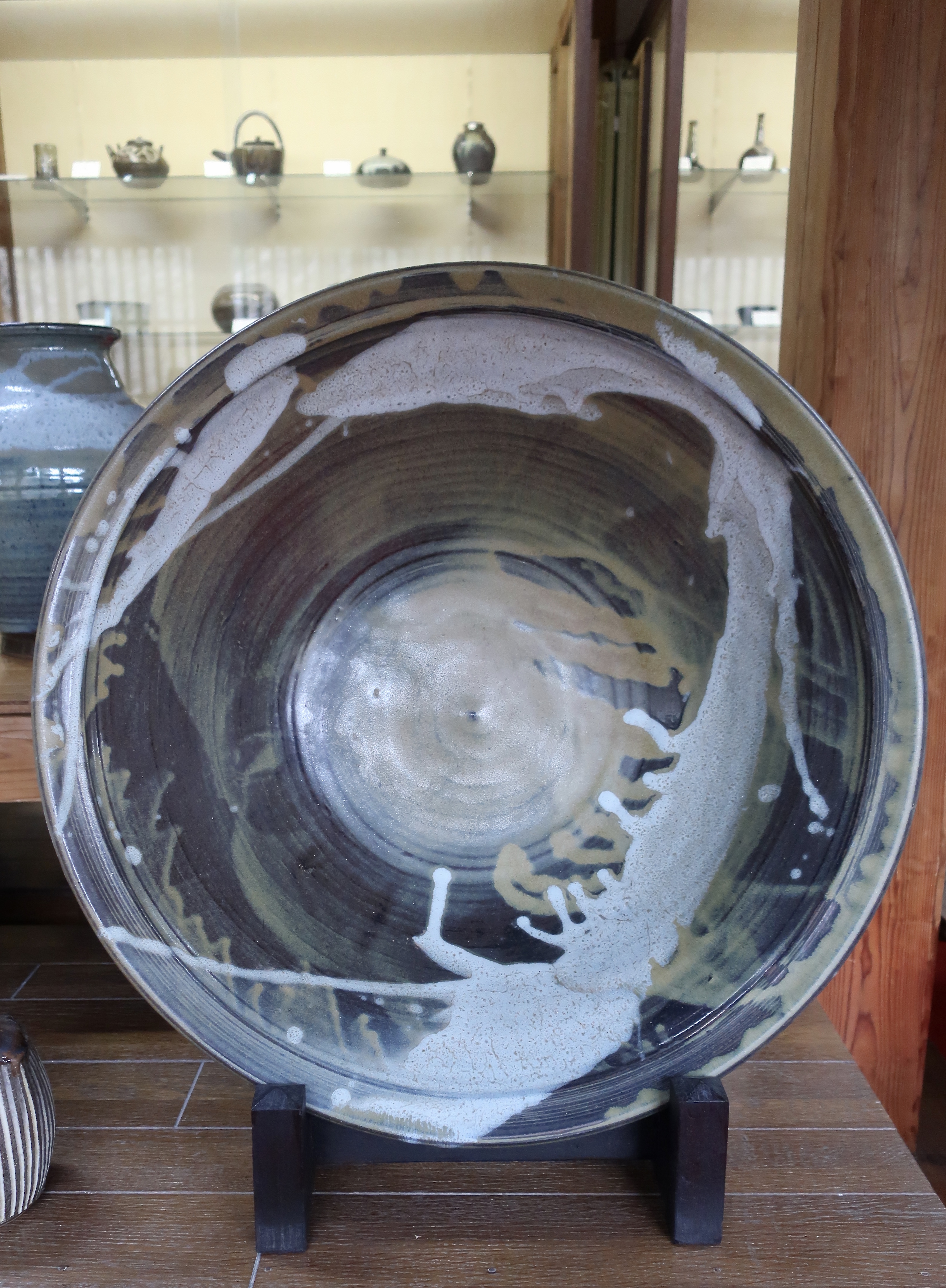 (As I said, Hosokawa family was an expert of matcha ceremony.)

In Edo-period, Hosokawa family protected and took a good care of pottery craft men but after 明治時代(Meiji period, 1868-1912) started, these potteries were forced to be closed because of declined demand. And also because Shoudai-yaki pottery was made mainly for tea cups, the design became less popular and heavier than other ceramics.

But After the world war Ⅱ, the founder of 岱平窯(Taihei-gama, means Taihei-gama kiln) started to bake Shoudai-yaki pottery and now there are many pottery kilns all around Kumamoto. They are mainly in the northern Kumamoto, which are 南関町(Nankan-town), 荒尾市(Arao-city), 玉名市(Tamana-city), 長洲町(Nagasu-town).

In 2003, Shoudai-yaki pottery was registered to National Traditional Crafts. 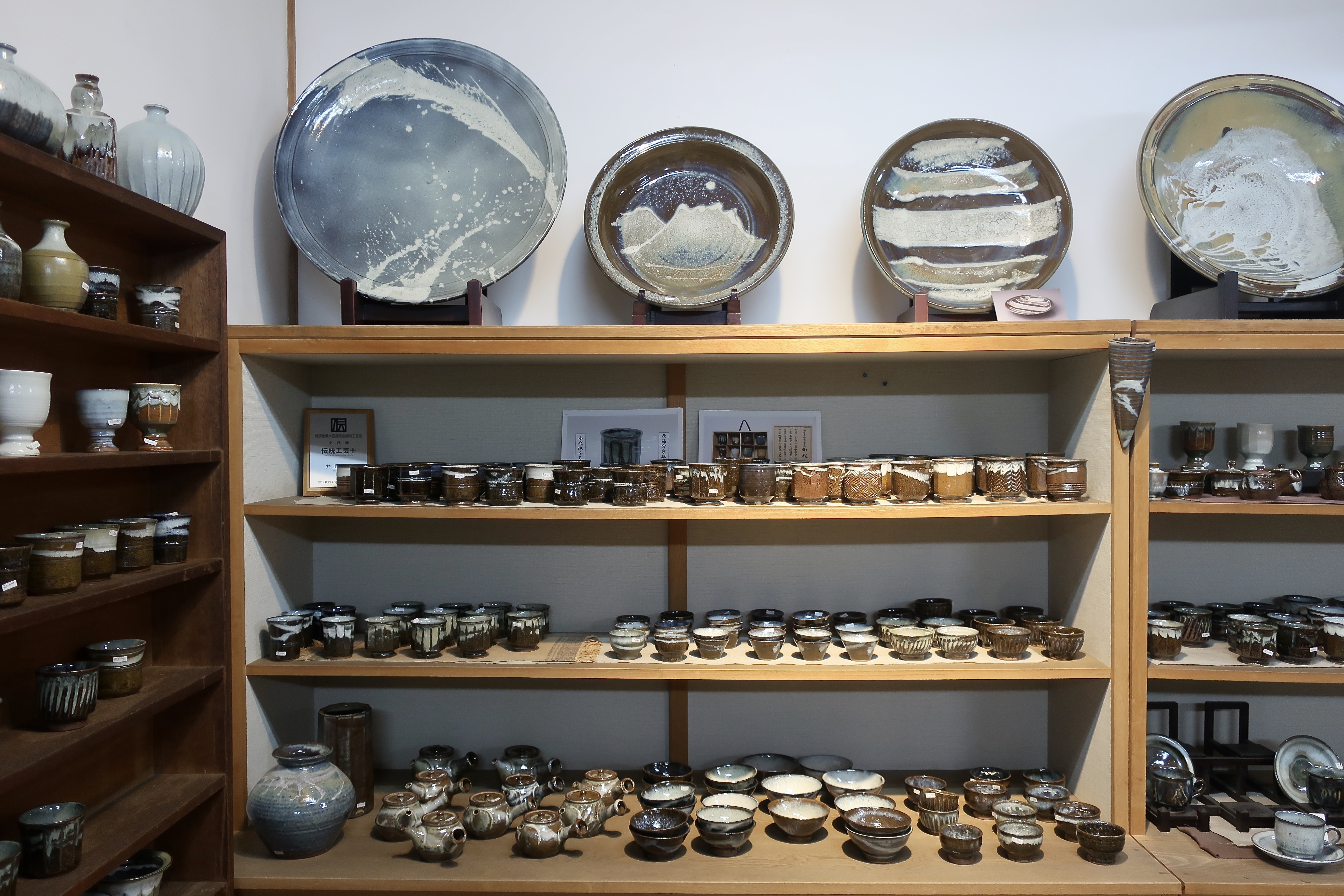 Find the one sparks your joy at Shodai-yaki festival in Nankan-town Kumamoto!

Now we understand how amazing Shoudai-yaki pottery is and hopefully you are interested in it.

Ume festival is held every year at the beginning of March. “梅(Ume)” means plum blossoms. 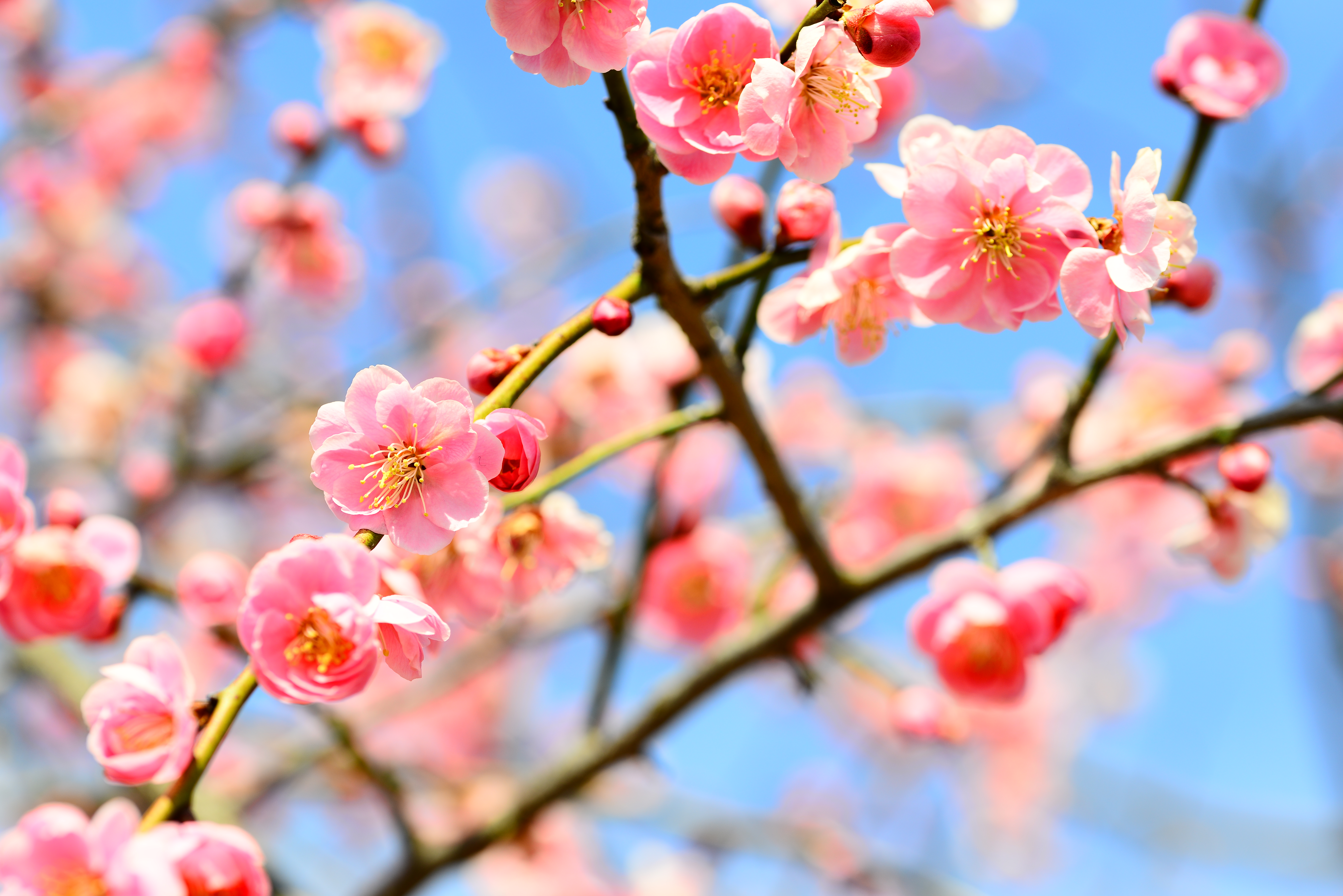 Do You know that Japanese love 桜(sakura, means cherry blossom) so much? Ume blooms before sakura and ume tells us spring is coming and we will enjoy sakura soon.

Along the streets, Ume trees were planted. They were not bloomed well yet but I enjoyed its beauty. 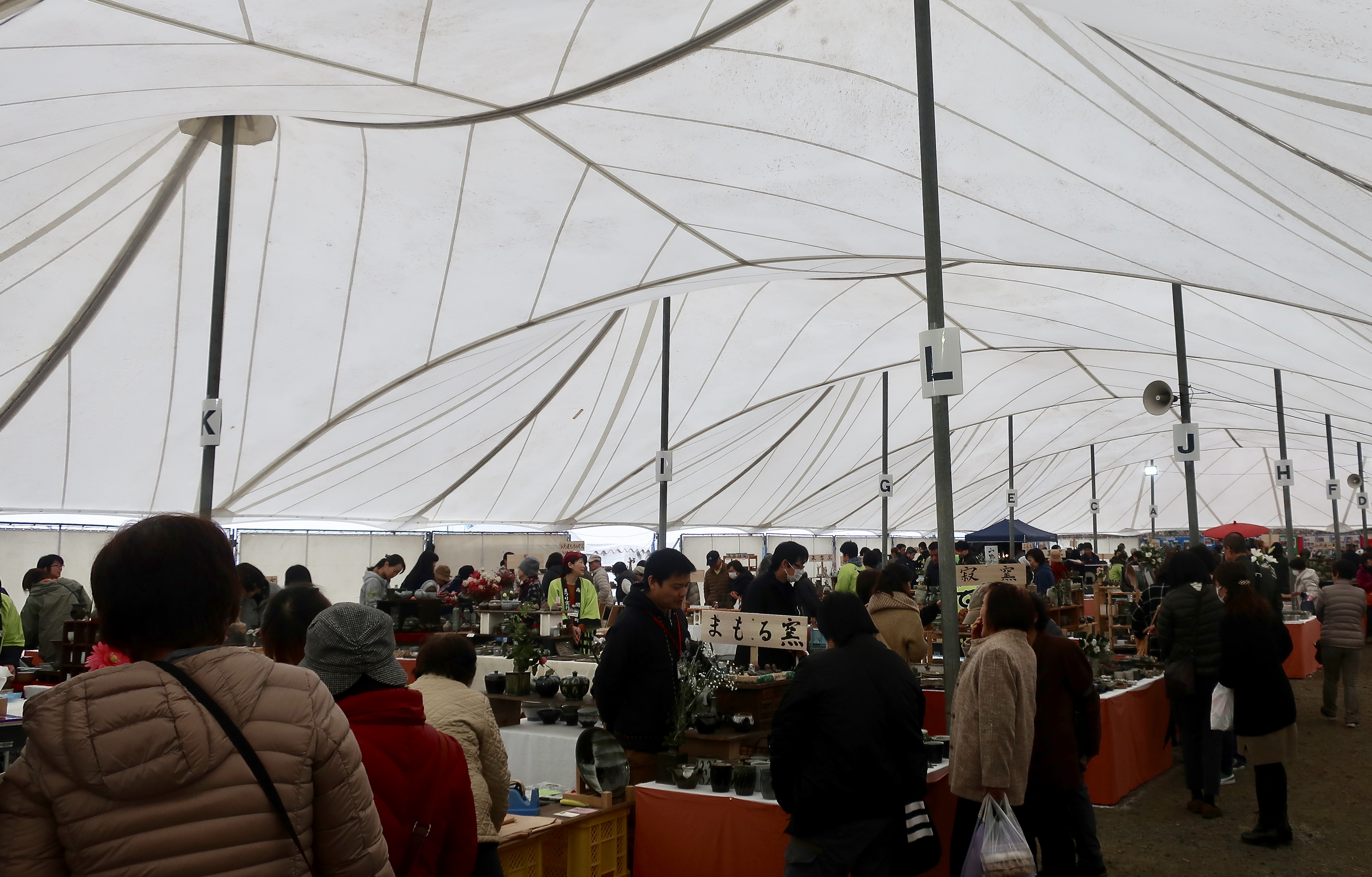 In this event, all the Shoudai-yaki pottery kilns gather and it’s the biggest event for its fans. 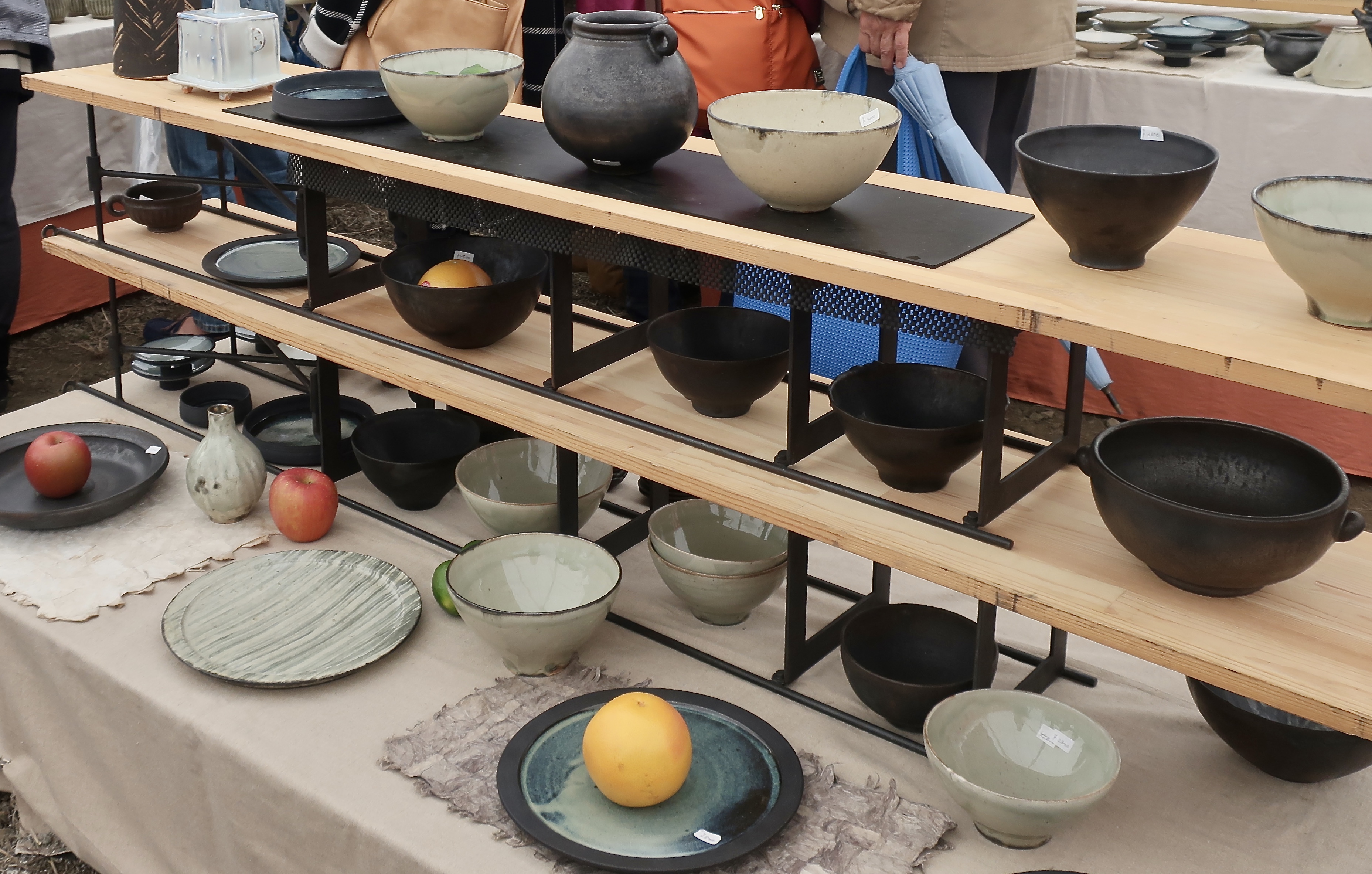 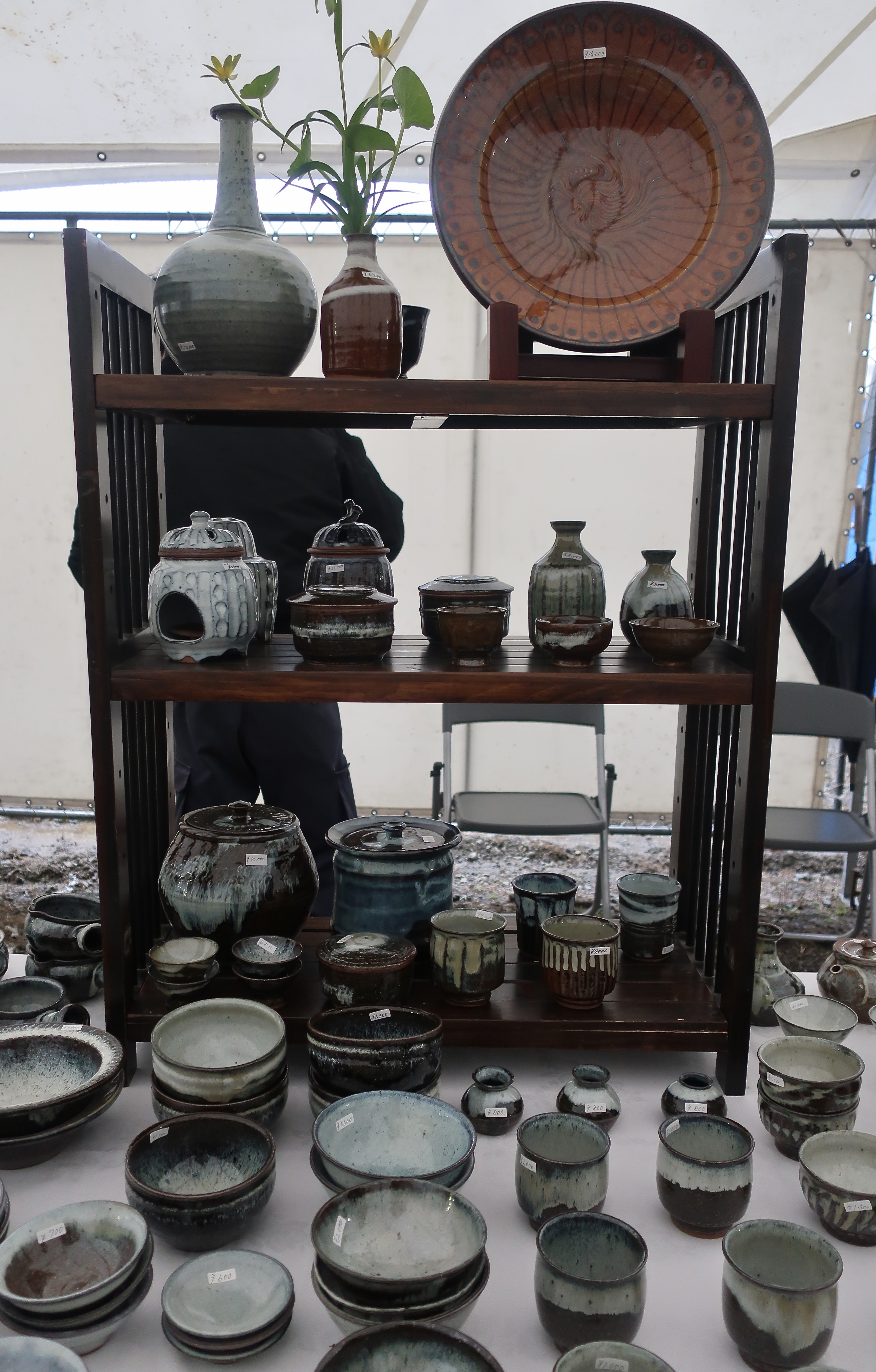 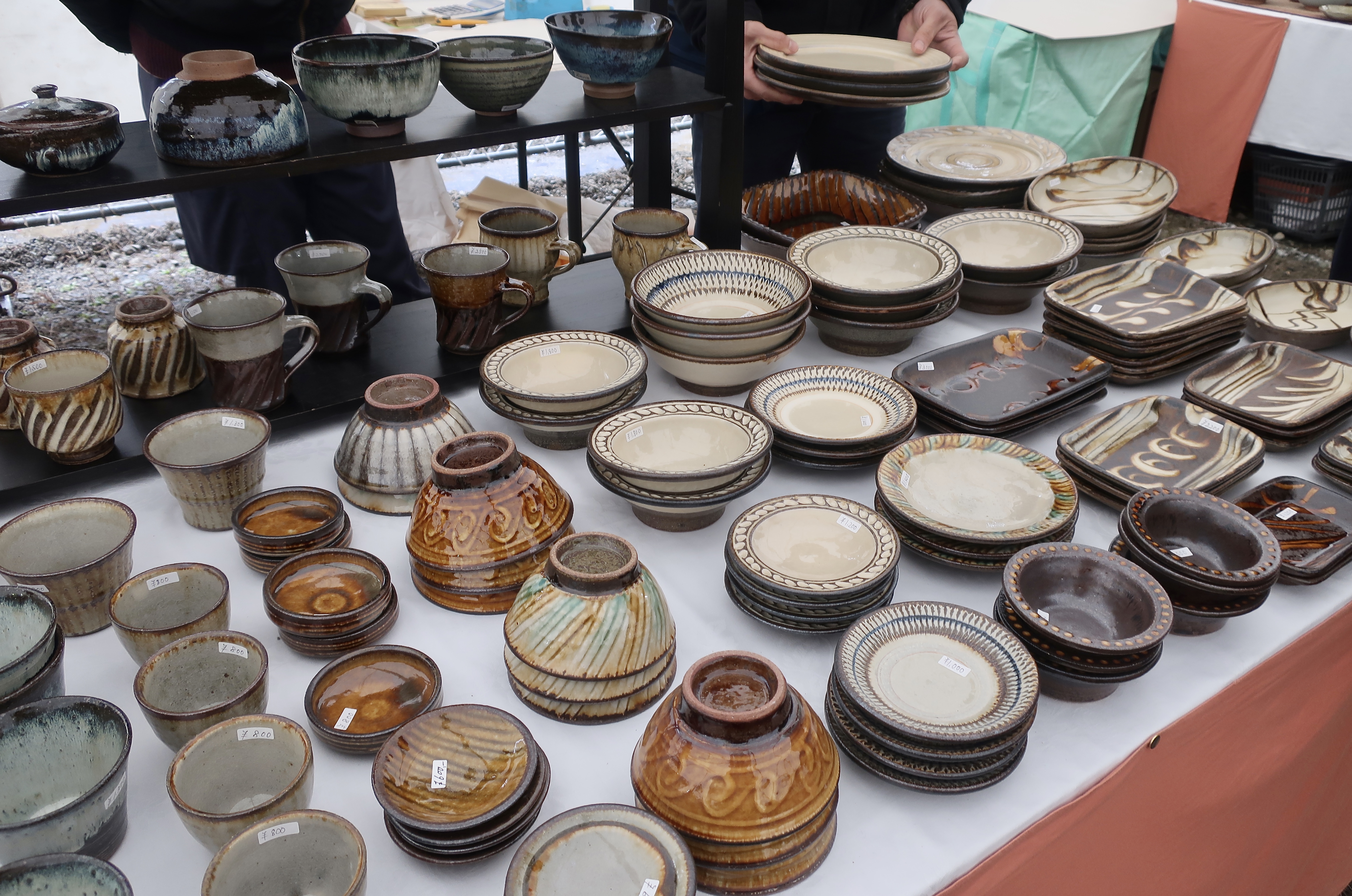 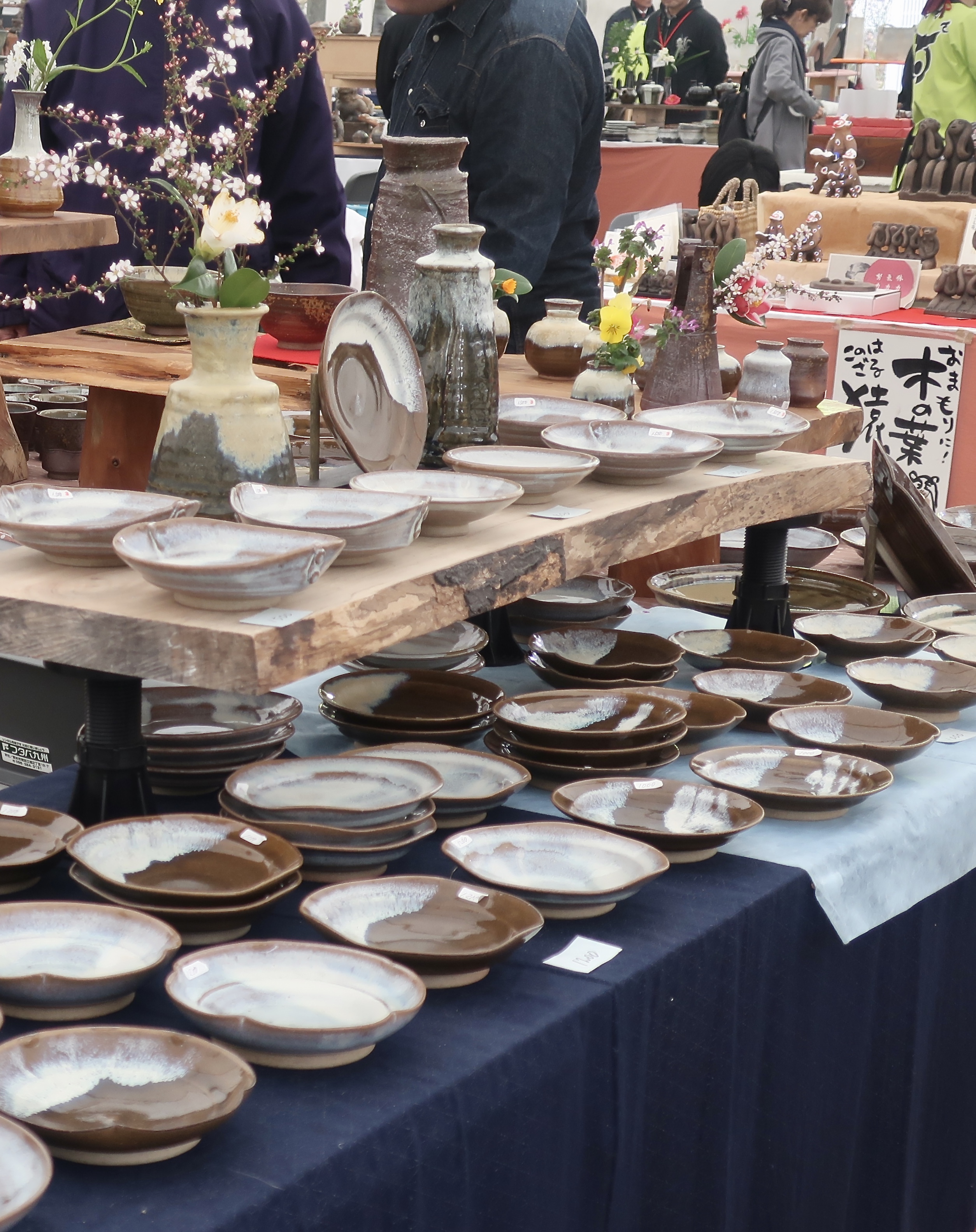 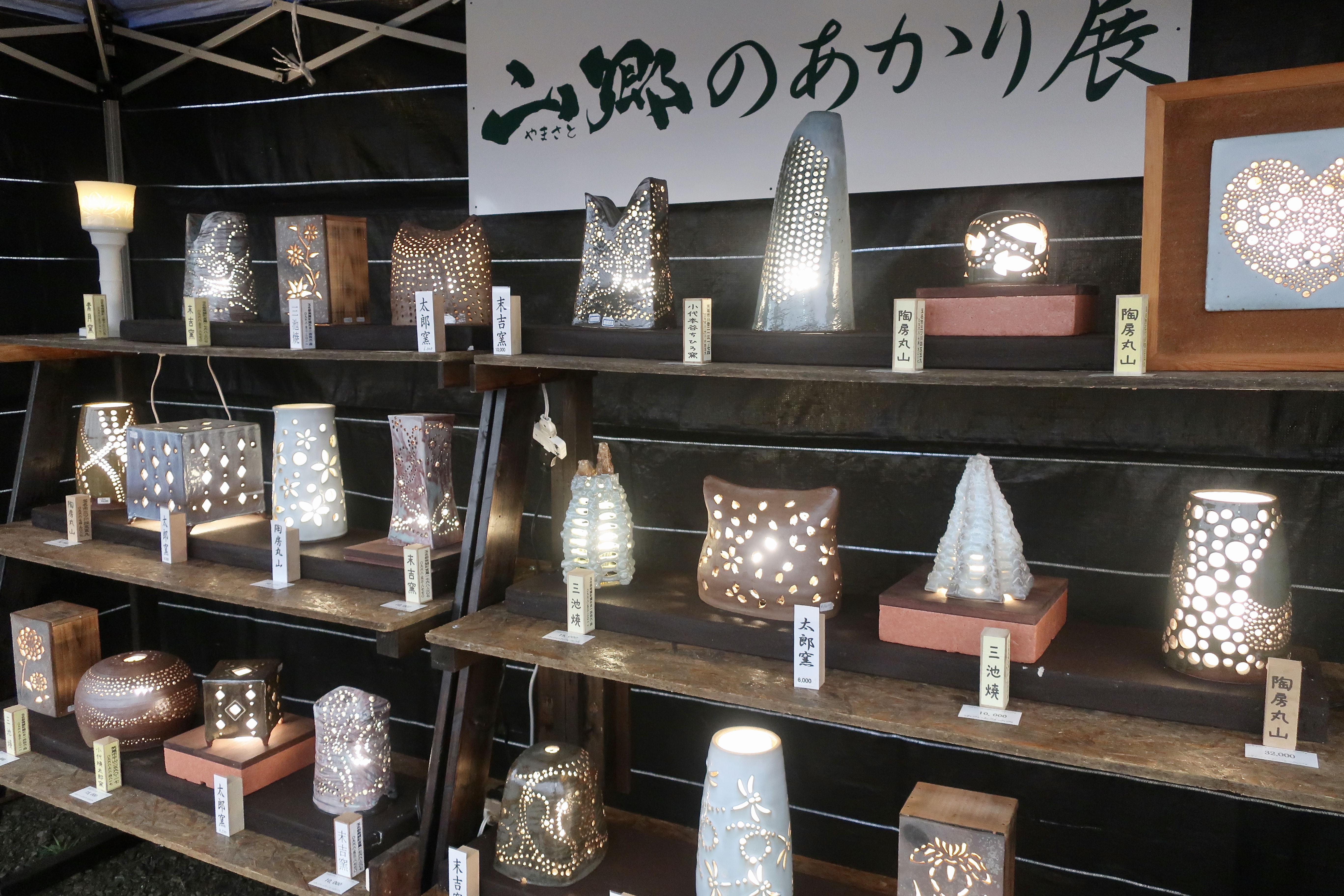 There are food stalls by locals so you can walk around and enjoy the festive atmosphere. 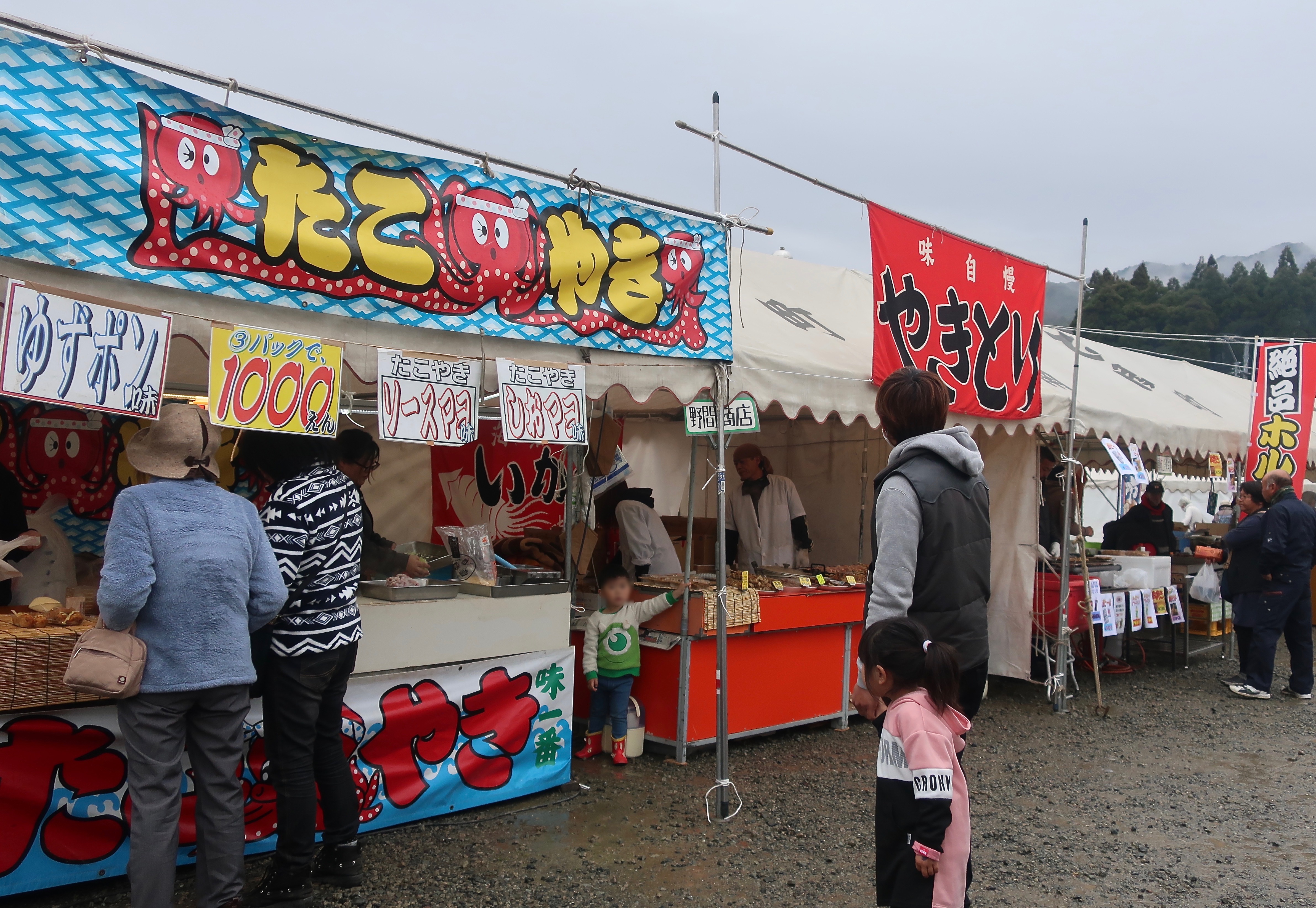 Interesting tour of unloading kiln and the climbing kiln.

Except for enjoying choosing and comparing potteries, there are also some special activities.

The other is climbing kiln tour with professional guides.

Let’s see one by one. 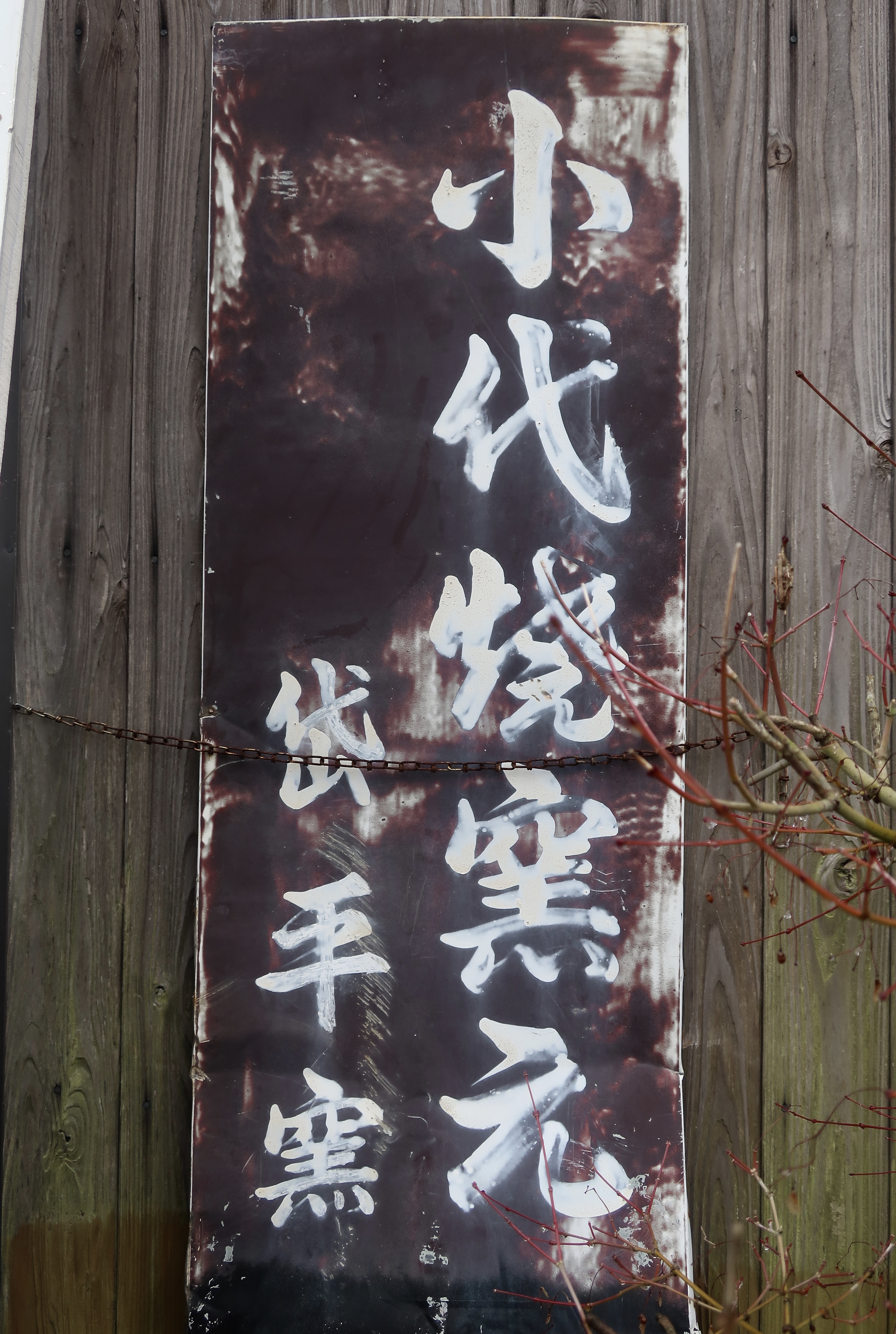 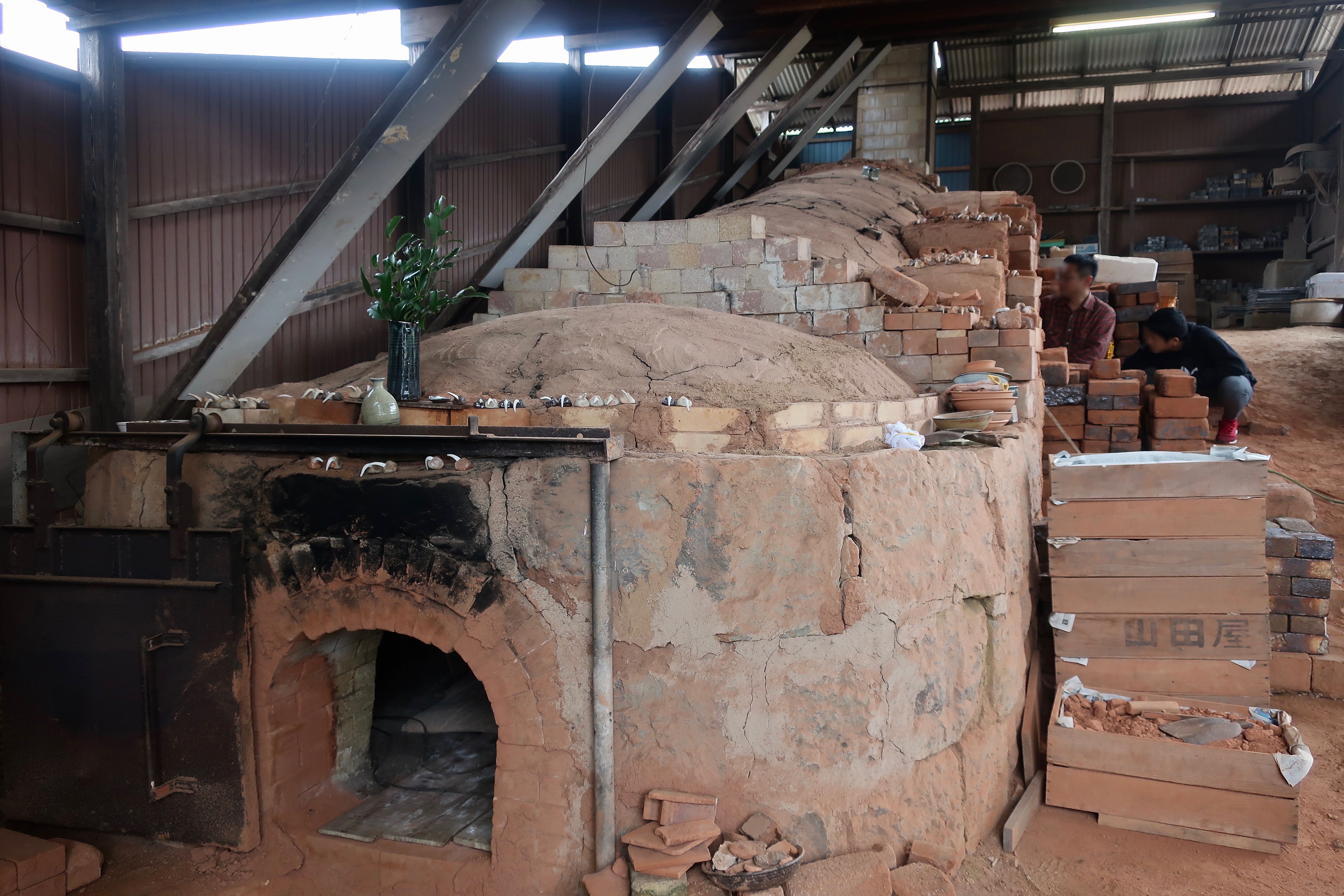 They bake potteries a few times a year and one of them is just before the festival so that we can see them unloading.

There are hundreds of potteries in this kiln. 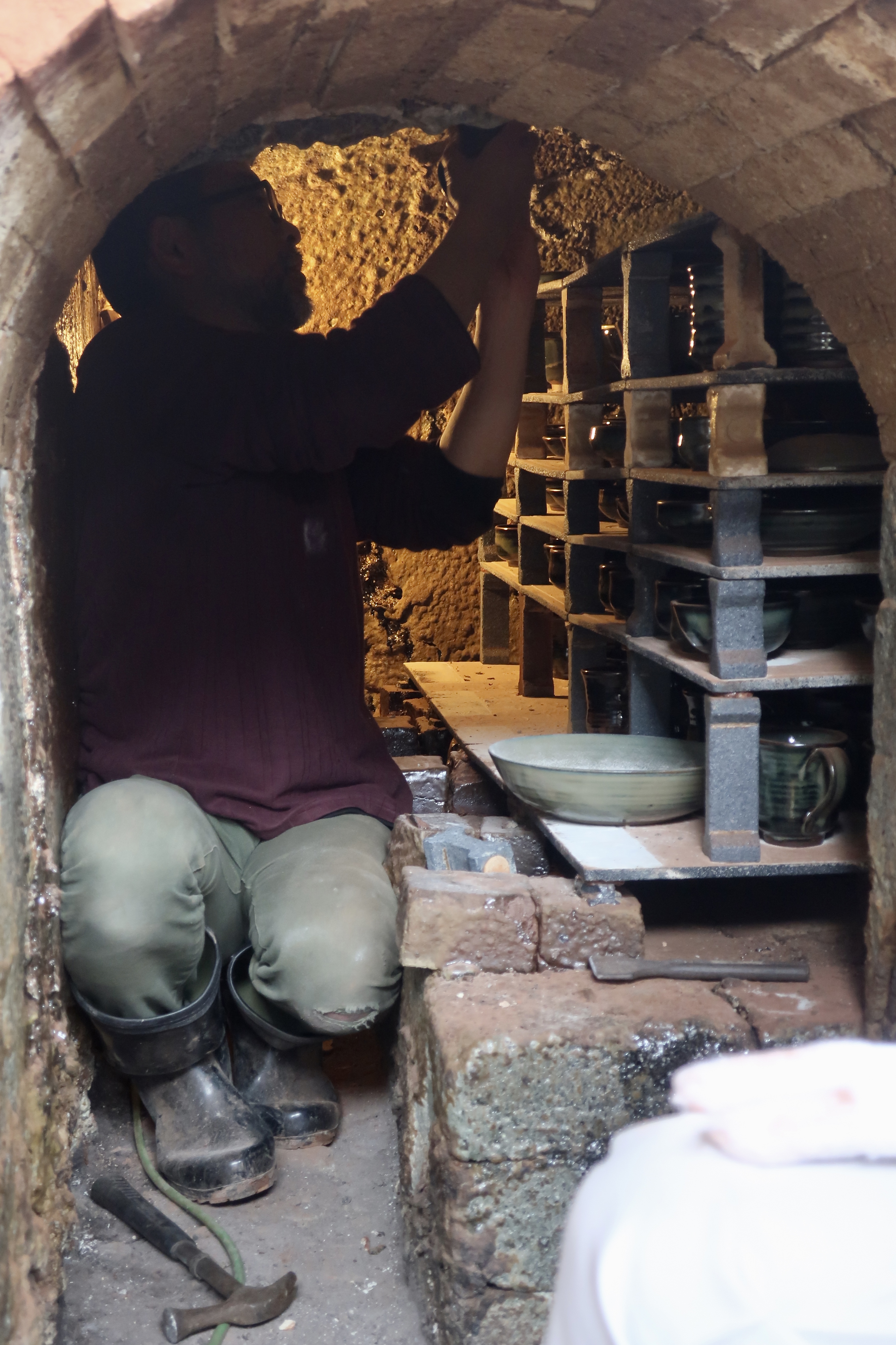 It must be exciting and also a little bit worrying to see how potteries were baked and what they’d get.

It is interesting to see them unloading and polishing the bottom of potteries. 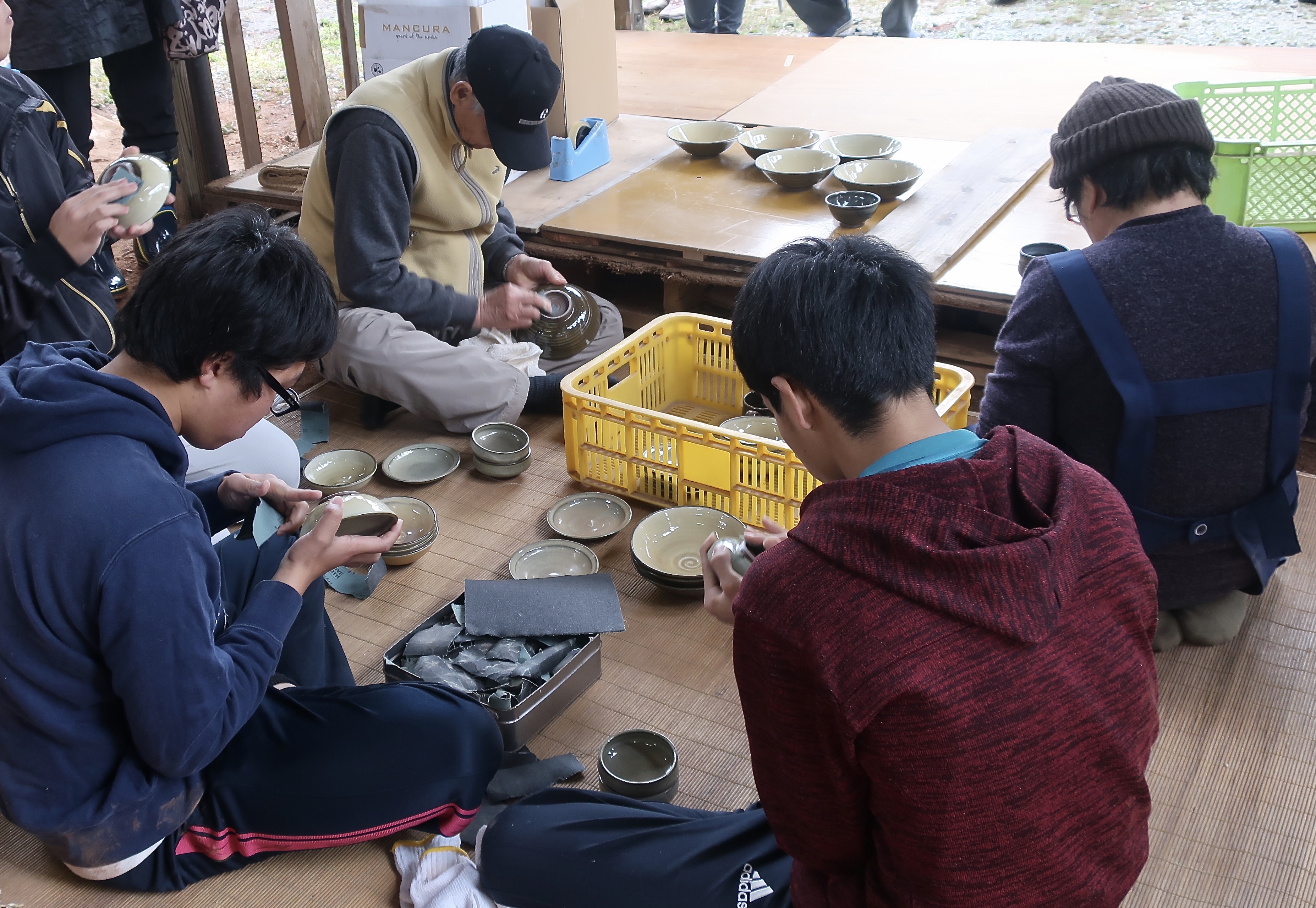 You can see unloading kiln once a day for both days during the festival.

The bricks have also got nice color! 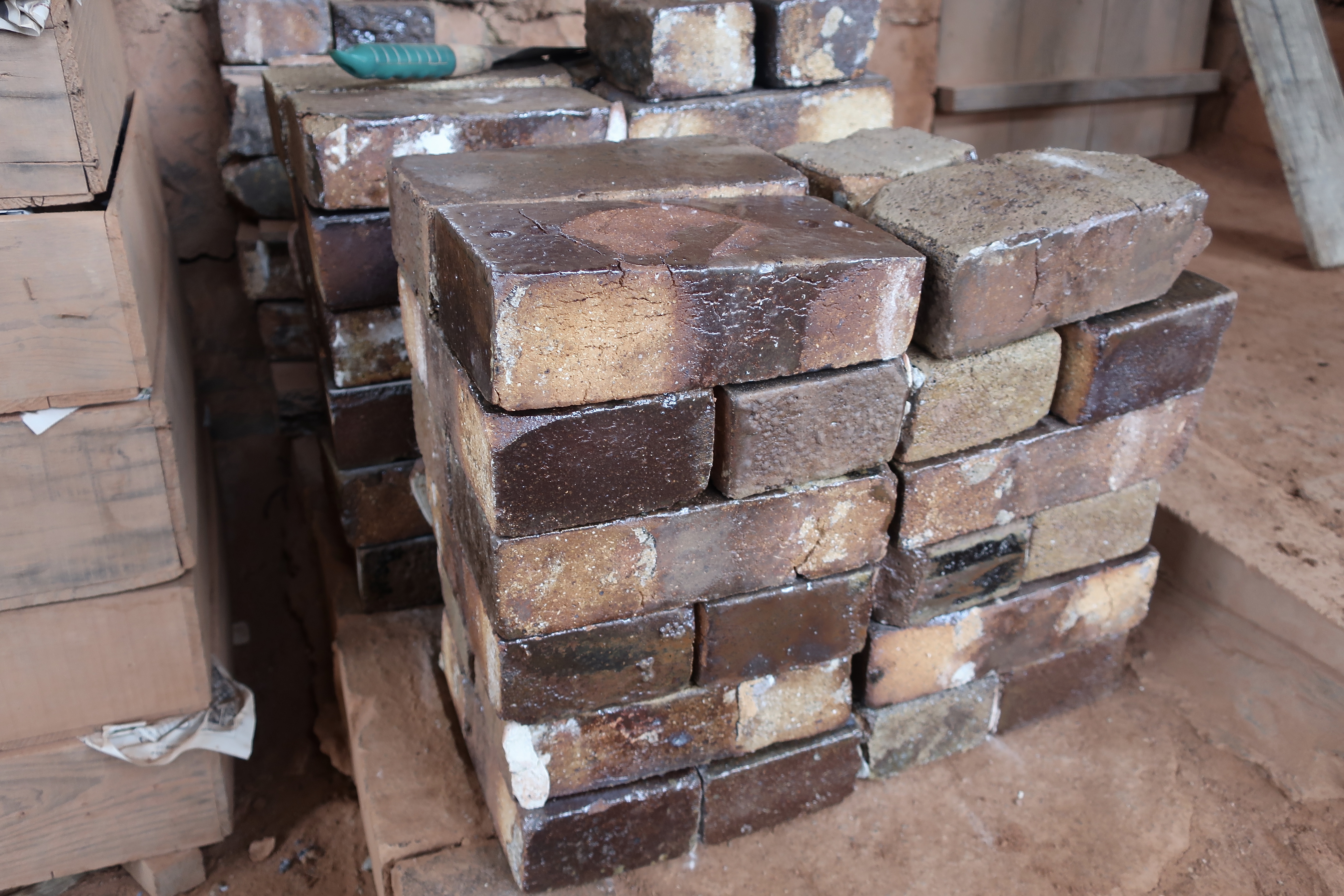 The other thing is climbing kiln tour with professional guides.

Unfortunately, they said that they can’t speak English but they will take you the places and you’ll enjoy interacting with good local people.

Meeting spot is in front of Taihei-gama kiln.

This time, unloading kiln at Taihei-gama started from 11:30 and the tour started from 12:00 so you can join both of them(it’s the information of 2019 festival. Please check before you go for next year.).

Around Koshoudai-no-sato park, there are two 登り窯(Nobori-gama, means climbing kiln). 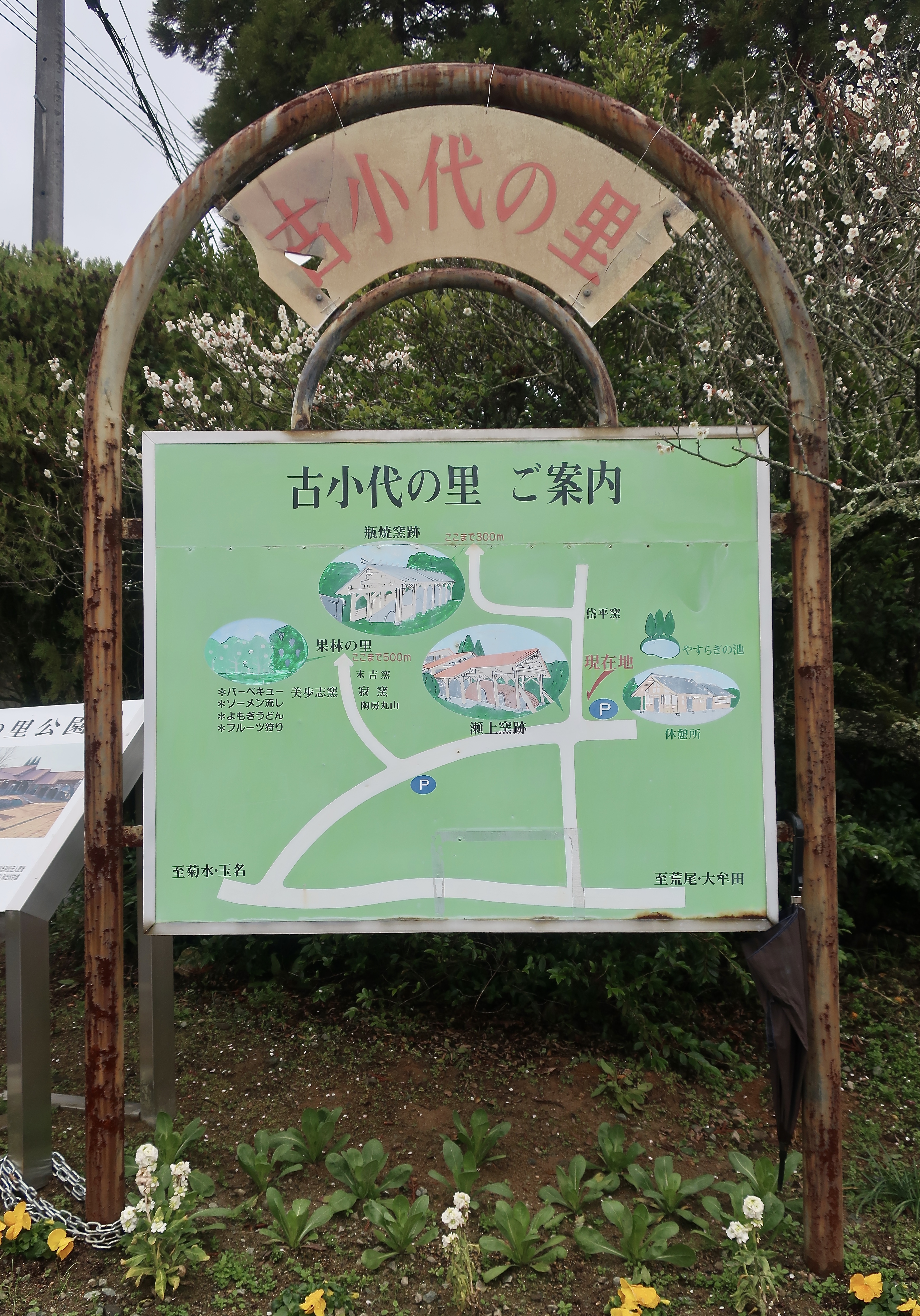 The nearest one is 瀬上窯跡(Senoue-kama ato, means Senoue kiln ruin).

It was built in 1836. It was flourished and created a lot of Shoudai-yaki pottery at its peak. 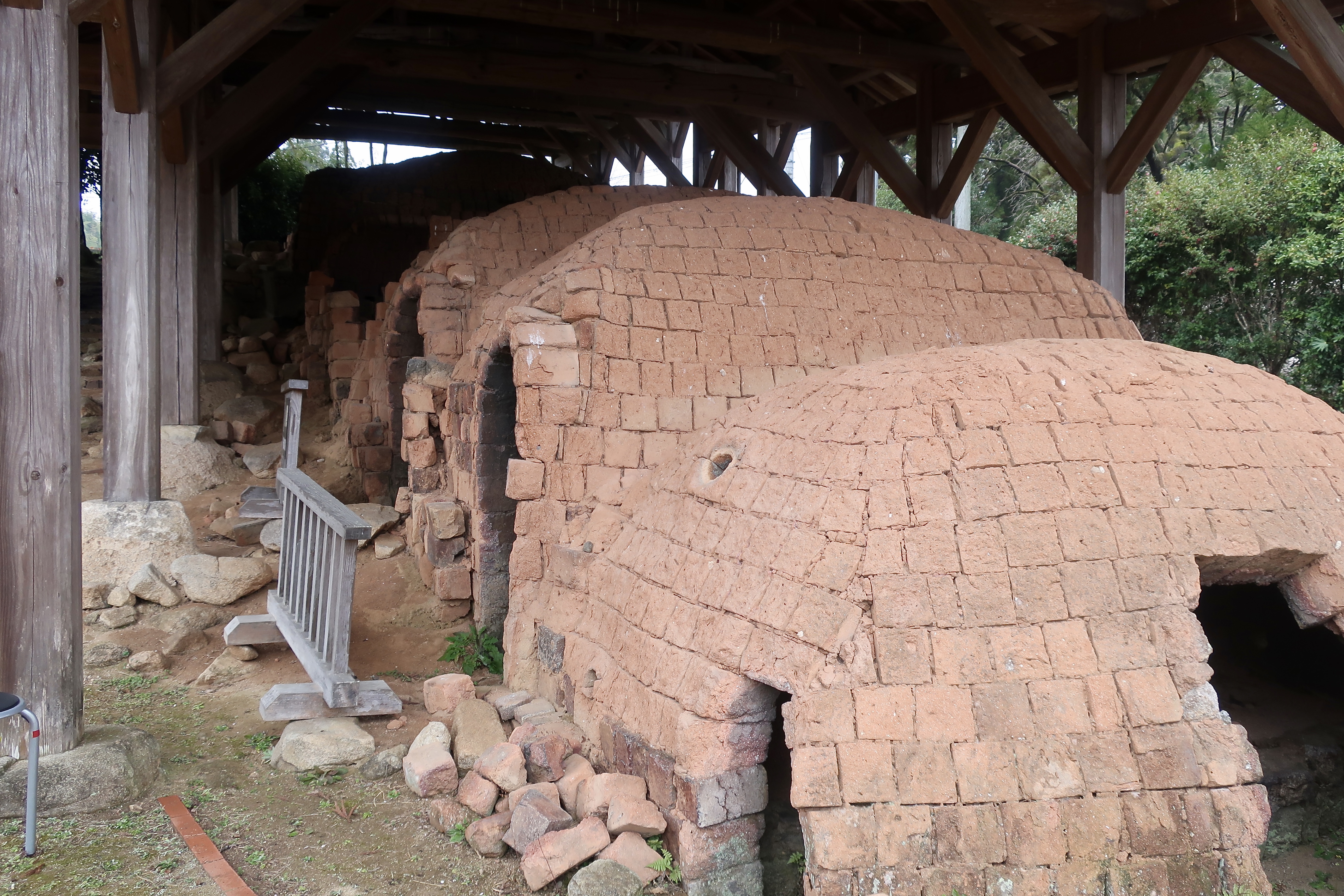 This climbing kiln is on the gentle slope. There are 9 round kilns are connected.

Craft men used to put fire from the bottom. Thanks to the round shape of kilns, they get strong flame convection and flame climb up.

For Shoudai-yaki, they need to be calcined at high temperature which is about 1300℃.

Still, it’s difficult to reach to the top so the highest kiln is for unglazed potteries.

You can see holes on the outside of kilns. Craft men used to check how potteries are doing. They must’ve been excited and also a little bit worried how pottery would look. 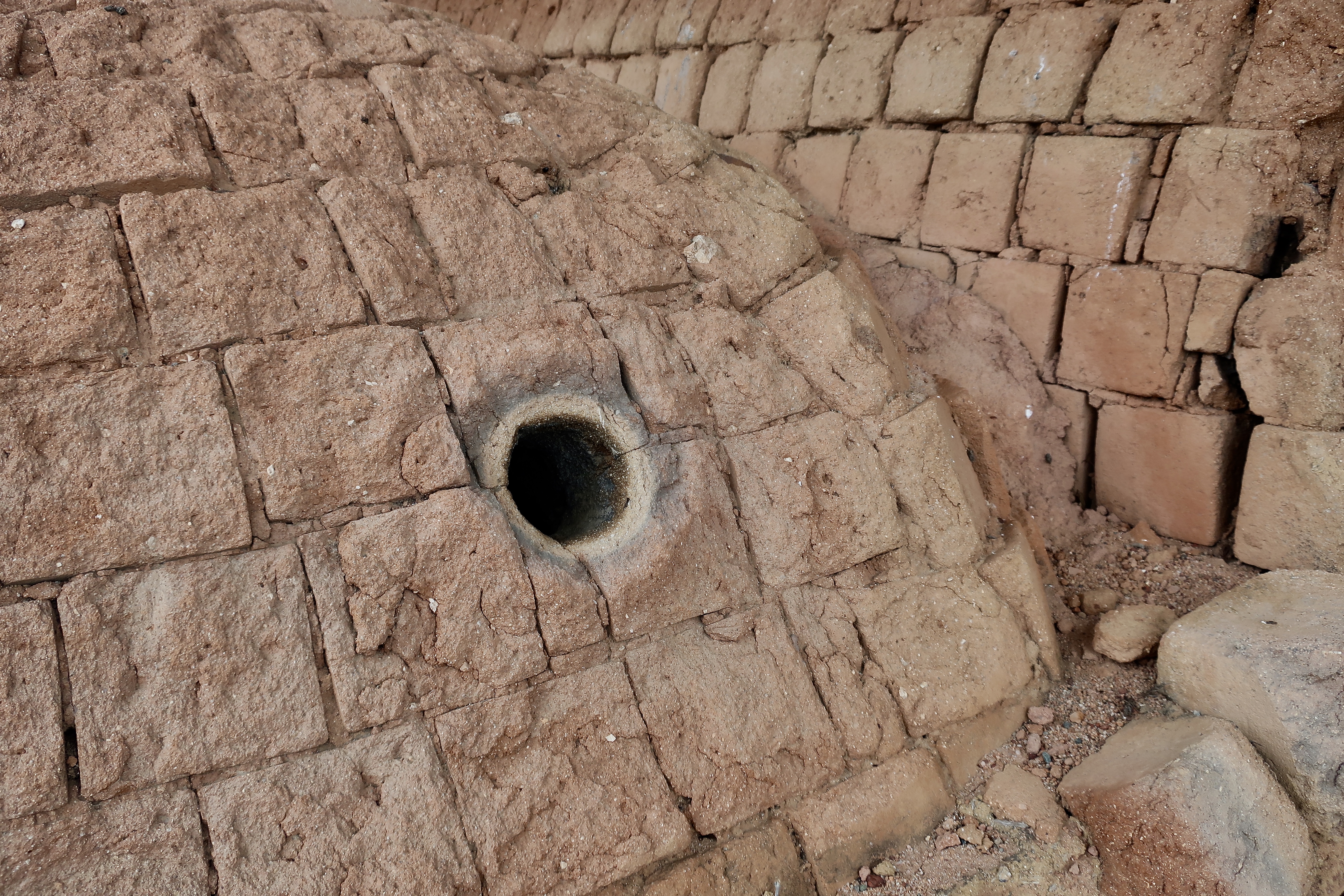 Usually, kilns have only one furnace door but this Senoue-kama ruin has other two at the right and left side of the main one, which makes Senoue-kama  more unique and valuable.

Now, Shoudai-yaki is considered to be the traditional crafts but at the time of its peak, they were made by the newest techniques.

There are also ruins of potter’s wheel and getting good cray from rough soil. 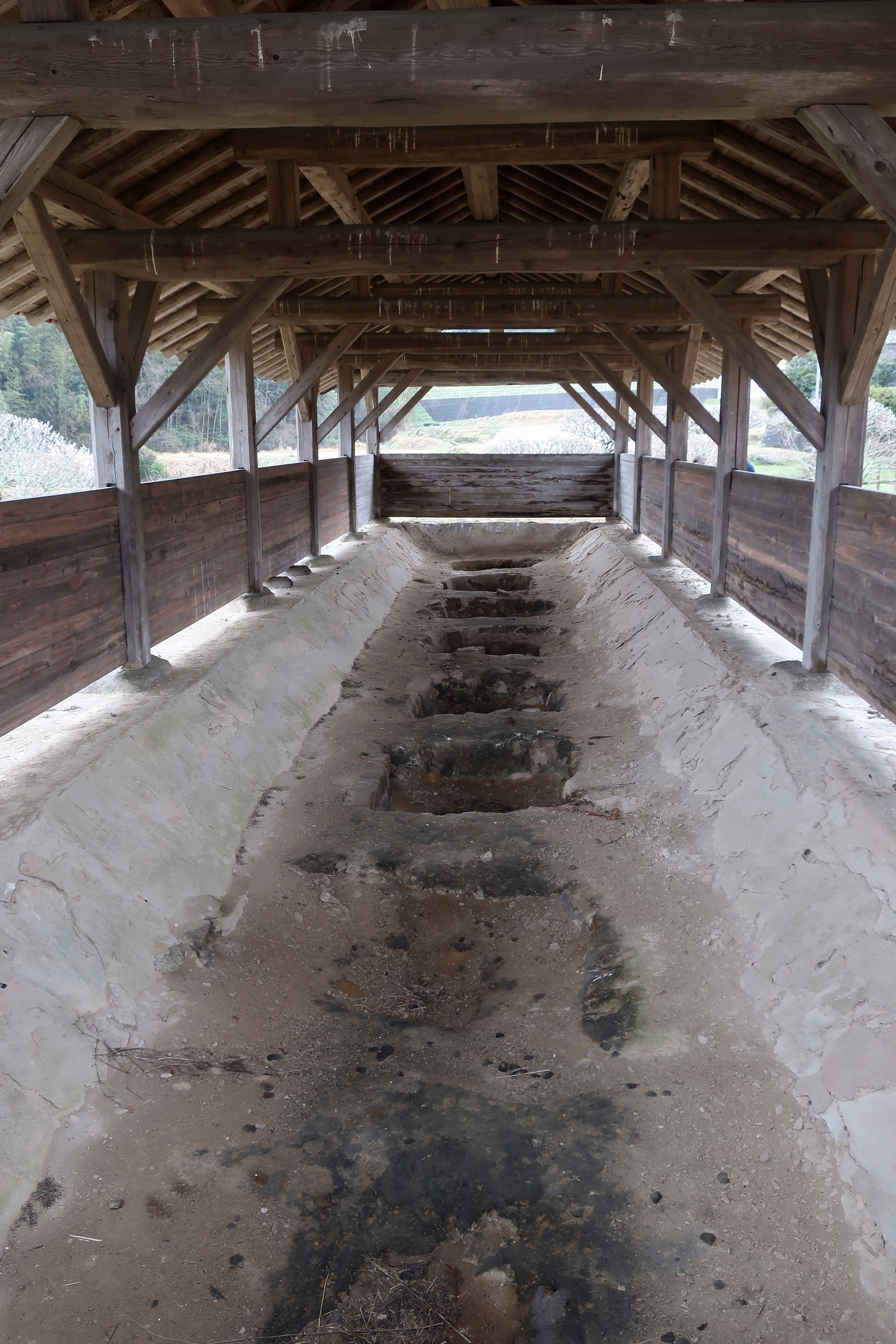 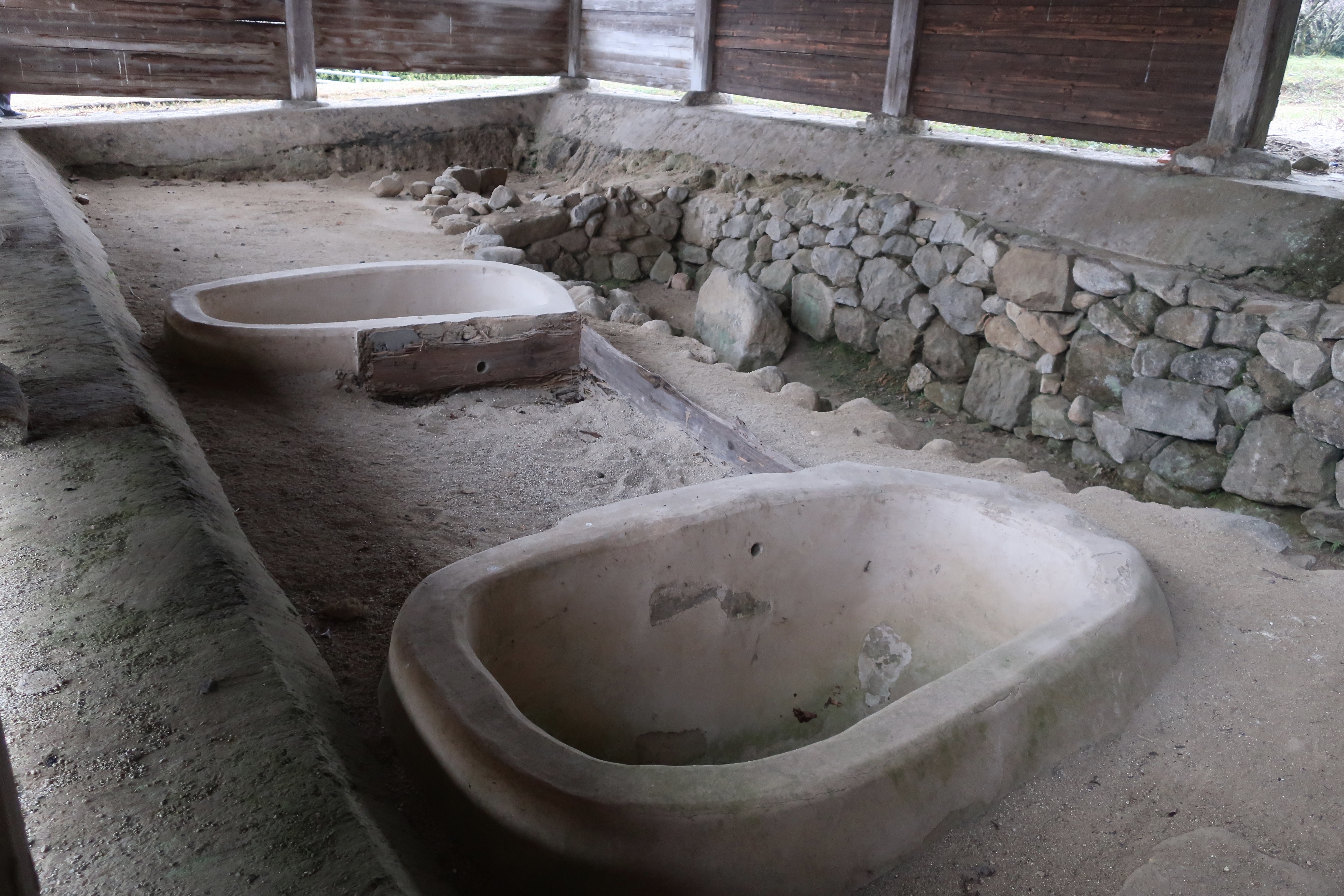 I’ve heard that many people from Tokyo, Kyoto, Fukuoka and other cities all around Japan joined the festival and enjoyed the amazing works.

If you are a big fan of pottery, it’s a must-go.

Even if you’re not, it’ll be interesting to walk around the old kilns and think about people who worked hard to make great works. 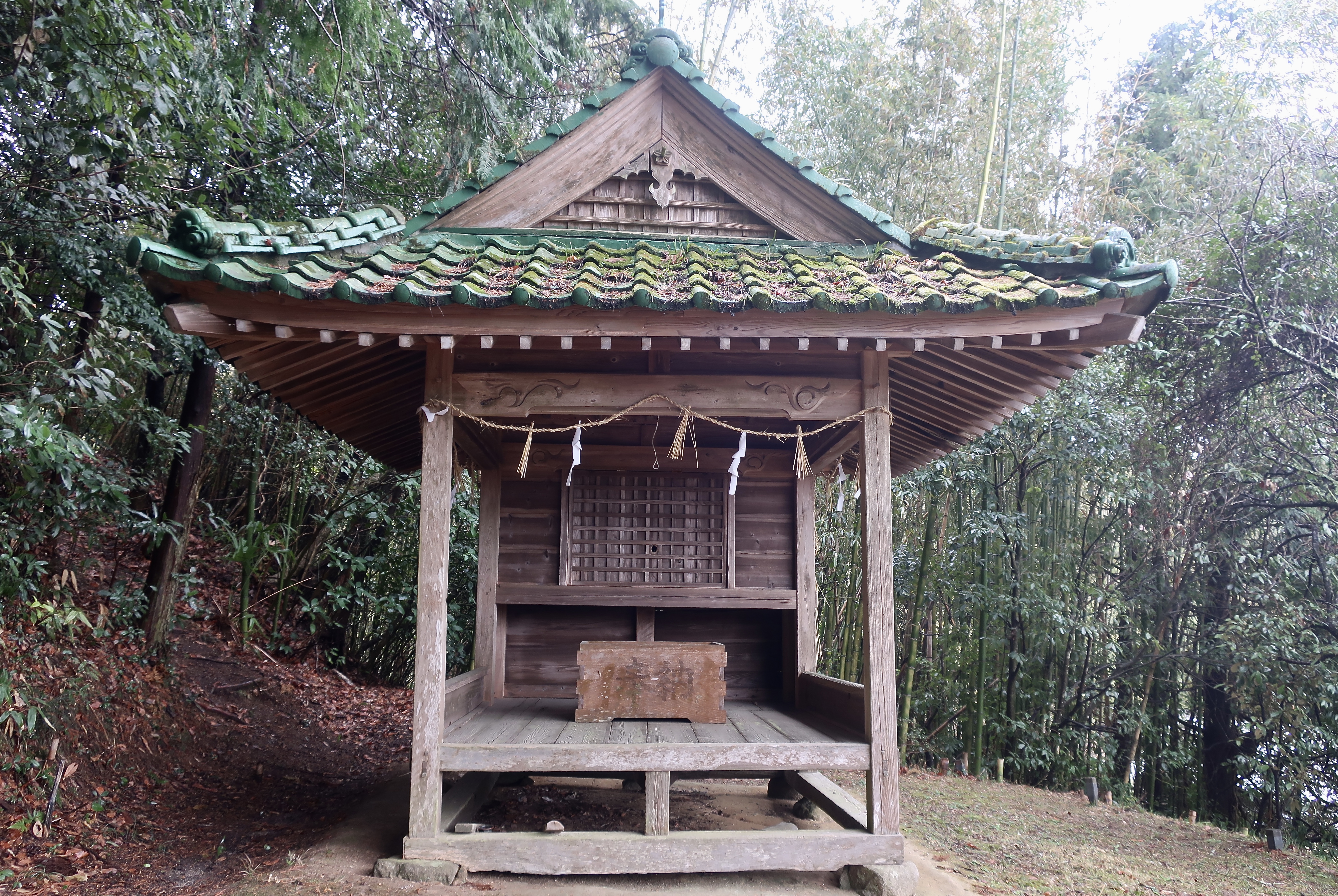 We are living in the world of mass consumption. We make ourselves satisfied by purchasing and owing stuffs but this type of desire never ends.

Shoudai-yaki pottery made me rethink how important it is to treasure and value the stories of all precious works by craft men. It does mean “sparks your joy” and by this sense, you won’t treat them just a stuff but an invaluable part of your life.

Visit Pottery and Plum blossoms Festival and enjoy the tour of the kilns.

I hope you’ll find the one sparks your joy! 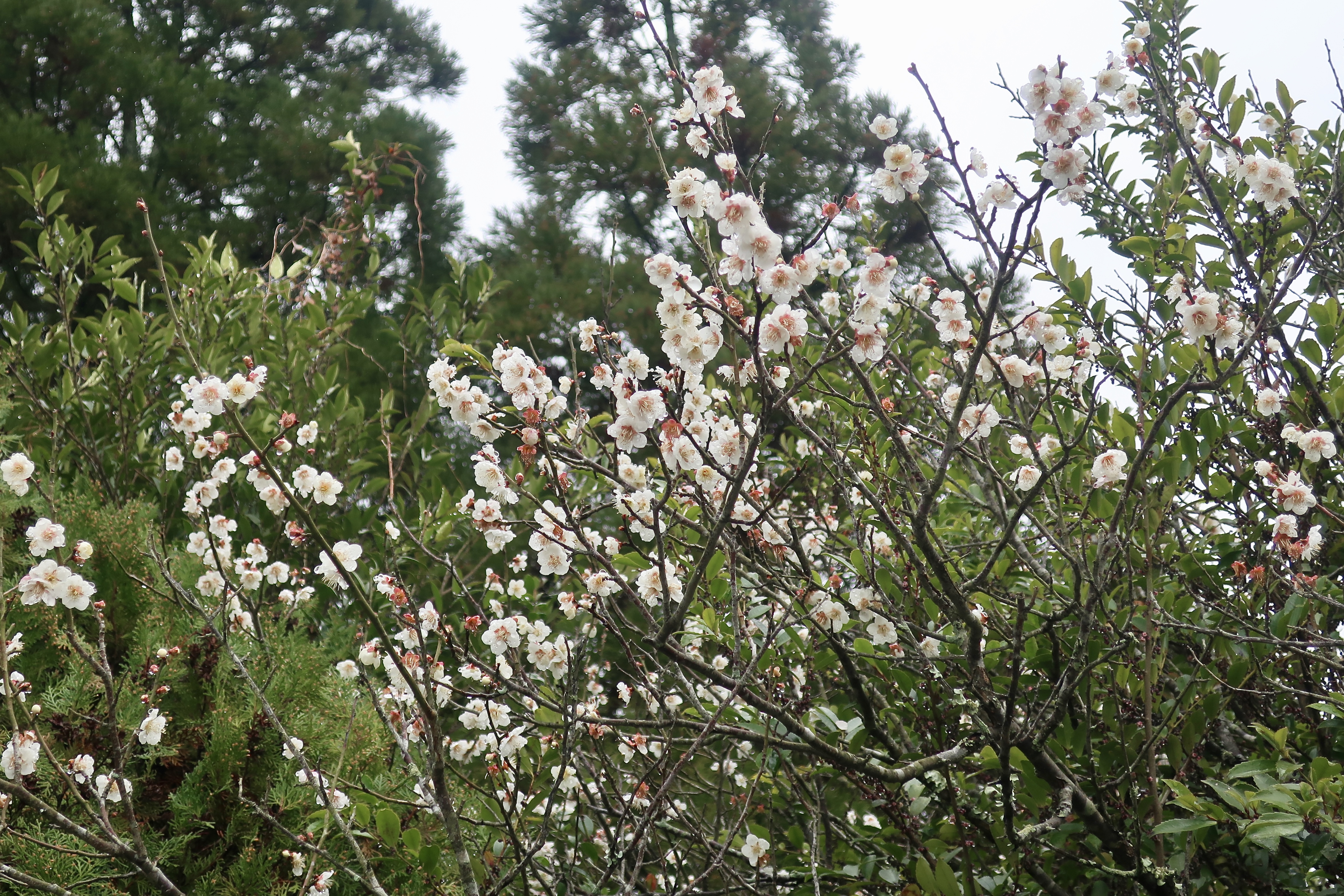 Sensuikyo(仙酔峡) in Aso where you will immerse yourself in its beauty and elegant Kyushu Azalea(ミヤマキリシマ, Miyama Kirishima).