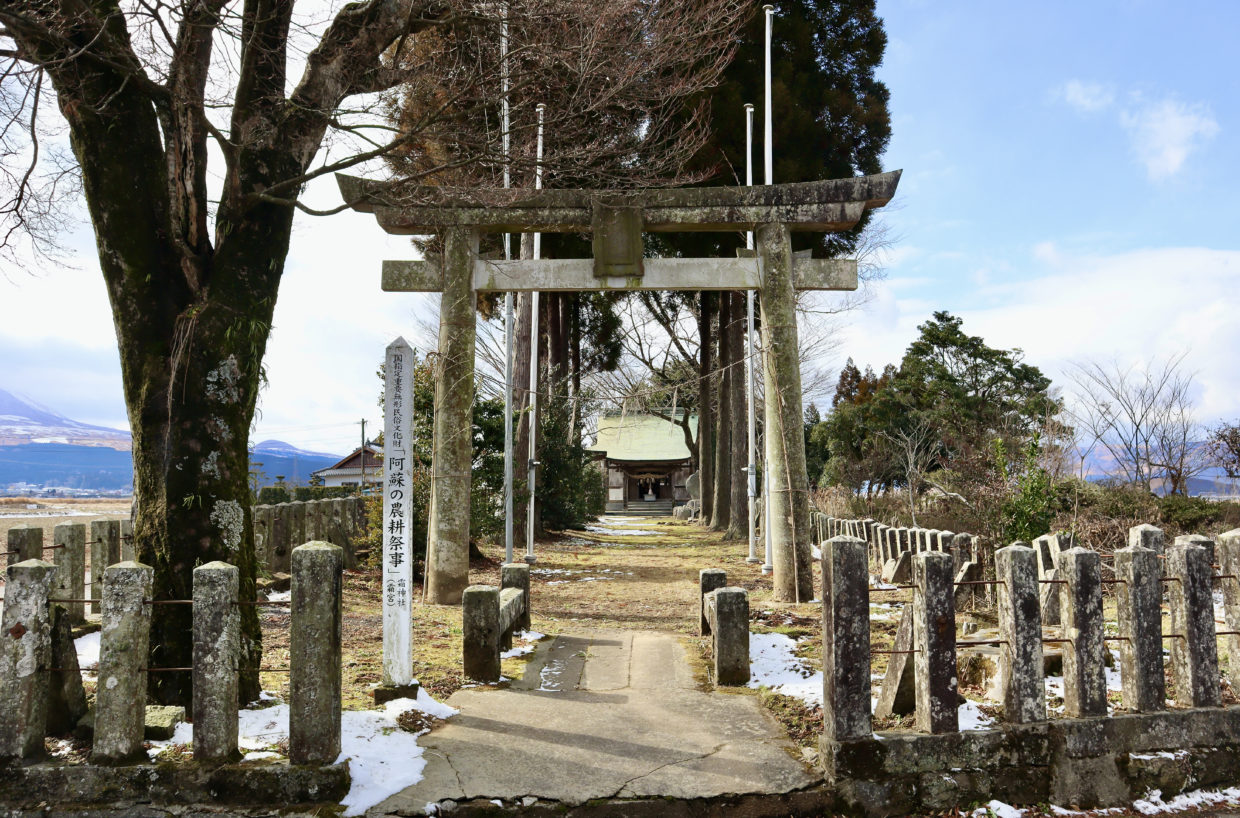 Aso is full of mythology and they have been passed on thousands of years. Sometimes we may feel that these are just fictional but quite often those stories help us to unravel unknown history and stories.

Today, I’m going to introduce to you Shimo Shrine (霜神社). It is located in Aso City and it takes about 10 minutes by car from Aso Station.

The Chinese character “霜 (Shimo)” means frost. You may wonder the meaning of “Frost Shrine”. Names always tell us stories and Shimo Shrine has interesting one from Aso mythology.

In the beginning of this January, I had an opportunity to visit Aso after it had snowed a lot. The good thing was that I could visit Shimo Shrine on a snowy day. Shimo Shrine has a strong connection with cold weather so it was a perfect visit for me. I hope after you read this article, you’ll visit Shimo Shrine and enjoy it with different view of it.

Mythology of Aso ~The God of Aso and his follower Kihachi~

I introduced one Aso mythology about the God of Aso and his follower Kihachi in the previous article about Kamishikimi Kumanoimasu Shrine in Takamori Town. Let me share it briefly again. Later, I’ll share a story after that which is connected with Shimo Shrine.

A long time ago, there was the God of Aso who loved shooting a bow and always enjoyed practicing it from the top of Mt. Aso. Every time he shot a bow, he always made his follower Kihachi fetch it for him. After hundreds of shooting, Kihachi got sick of it and one day he took a bow with his toe and threw it to the God. The God of Aso got furious by Kihachi’s rude behavior and went after Kihachi. Kihachi fled desperately and found out a huge rock blocked his way. Kihachi made up his mind to kick the rock hard as much as he could and managed to make a hole and escaped from it. We can see this huge rock with a hole at Kamishikimi Kumanoimasu Shrine in Takamori Town.

Now, let’s go another story. Kihachi thought he could succeed to escape from the God of Aso but the god could catch up with Kihachi and captured him. The god was furious and he cut off Kihachi’s head. But as soon as the god cut off his head, a new one grew. The god tried again and again but Kihachi had a new head anyway. Finally, the God of Aso buried Kihachi’s head, limbs and body separately. Kihachi couldn’t live anymore but his soul and his strong grudge against the god stayed in the world. Kihachi’s anger brought Aso severe frost and it made people impossible to grow crops. People suffered severely from hunger.

So how people tried to solve this problem? To console the soul of Kihachi, local people decided to warm his spirit. This Shinto ritual is called Hitaki Shinji ritual (火焚神事), which is translated as “Lighting a fire ritual”.

Traditionally, a girl around 10 years old from the local area is selected and she will stay in Hitaki-den hall (火焚殿) where she will keep lightning a fire.

Hitaki-den hall locates just 100m away from Shimo Shrine. This ritual continues for 59 days. In the past, those girls had to stay in the hall for the whole period so they couldn’t go to school. However, these days other locals watch fire while a girl goes to school so that she can study at school.

This Hitaki Shinji ritual is very unique and said it has over 2,000 years of history. It is designated as Important Intangible Folk Culture Asset in 1982 together with other rituals practiced in Aso, such as Hifuri Shinji (火振り神事, brandishing torches), Onda Matsuri (御田祭り, carrying portable shrines and walking around rice fields), etc.

⬇️ If you are interested in those local cultures, check the article below about Kokuzo Shrine and get to know more about Aso!

Hitaki Shinji ritual starts from August 19th to October 18th every year and it consists of 5 parts.

Let’s see how they proceed.

In the morning of August 19th, locals bring logs to Hitaki-den hall and a priest purify them. Then a priest make a fire using fire sticks. A girl and her helper (usually her grandmother) set logs and light a fire.

I heard that until the 17th to 19th century, a grown woman who was selected in the area took care of the fire but after sometime, a girl has been selected. Some documents say that people believed that if they chose a grown woman not a girl, then they will have long frost in winter.

After lighting a fire, locals go to Shimo Shrine to bring Mikoshi (神輿, a portable shrine). Inside of Mikoshi, there is Goshintai (御神体, an object of worship). A priest moves Goshintai to the top of Hitaki-den hall to make it warm. This is the start of this ritual and the fire will be lit for 59 days.

After 59 days, the girl extinguishes a fire and ends the ritual at the hall on October 16th. A priest takes out the object of worship and bring it back to Shimo Shrine. I heard that locals bring the ash to their rice field and scatter it throughout it wishing they will have bountiful harvest.

On October 18th, they have Yodo Festival (夜渡祭) as the end of Hitaki Shinji ritual. They have this festival at Shimo Shrine. It starts from 7pm and continues to the next morning. In this festival, people show their appreciation to god that they could finish 59 days of ritual safe and sound. A priest offers Kagura performance (神楽). By performing Kagura, people invite gods to a shrine, convey their appreciation to gods for always protecting them from evil and cerebrate life together. In this Yodo festival, a priest plays Kagura performance and after sometime, he goes outside and purifies his body with water. And he goes back to the stage and plays Kagura again. He continues this cycle until the next morning.

At the same time, local people play sumo wrestling (相撲) in the premise of Shimo Shrine. When you visit a shrine, you often see a sumo ring near the main hall. Originally, sumo was played as a ritual service wishing for bountiful harvest.

⬇️ If you want to know more about Kagura performance, visit my previous article about Aso Nagano Shrine!

⬇️ At shrines, you see Chozu-ya which is a place to wash your hands and rinse your mouth before entering shrines (Because of corona, nowadays most shrines close Chozu-ya.). Washing hands means purifying your body and rinsing your mouth means purifying your soul. Do you know why we use water for purification? It’s derived from Kojiki (古事記) which is the oldest history book that tells us how all the gods in Japan were born and how Japan was created. In the article below, you will get to know the idea of “Misogi (禊)” which is a purification practice that now we can see in sumo, too. If you are interested in those stories, check the article below about Ukishima Shrine (浮島神社) in Kashima Town. It’s interesting!

In September 2009, Hitaki-den hall was burned down during the process of Hitaki Shinji ritual. It was shocking for locals but they didn’t want to die out the tradition which has over 2000 years of history. Locals, parishioners and even local students worked hard to carry out fund-raising activity for over 6 months.

Thanks to their hard work, they could collect over 20 million yen (about 190 thousands dollars). In the summer of 2010, they completed building a new hall and had a ceremony for its completion.

Fire occurred in 2009 and just one year later, they could carry out Hitaki Shinji ritual as usual. This is all about local’s great effort and passion that they don’t want to die out their tradition.

Before writing articles here, I hadn’t really cared about history of shrines. But as I looked for their origins and stories, I have started to get interested in them and now I can see those places with another view. This kind of experience enriches my life and if we don’t know things very well, it’s “mottainai (もったいない, it’s a shame if you don’t know thingsand enjoy them at most!)”.

I am grateful that I started this Untapped Kumamoto and now I think it as my lifelong project. It’d be great if we can enjoy this journey together.

We are still in a difficult situation of COVID19 but I wish you will visit Aso and also visit Shimo Shrine in the future. For now, please take care and stay safe.

There is a road along with Shimo Shrine. If you go forward, you will find a parking lot on your right which is maybe for 2-3 cars. This road is narrow so I do not recommend you to go there with a big car!