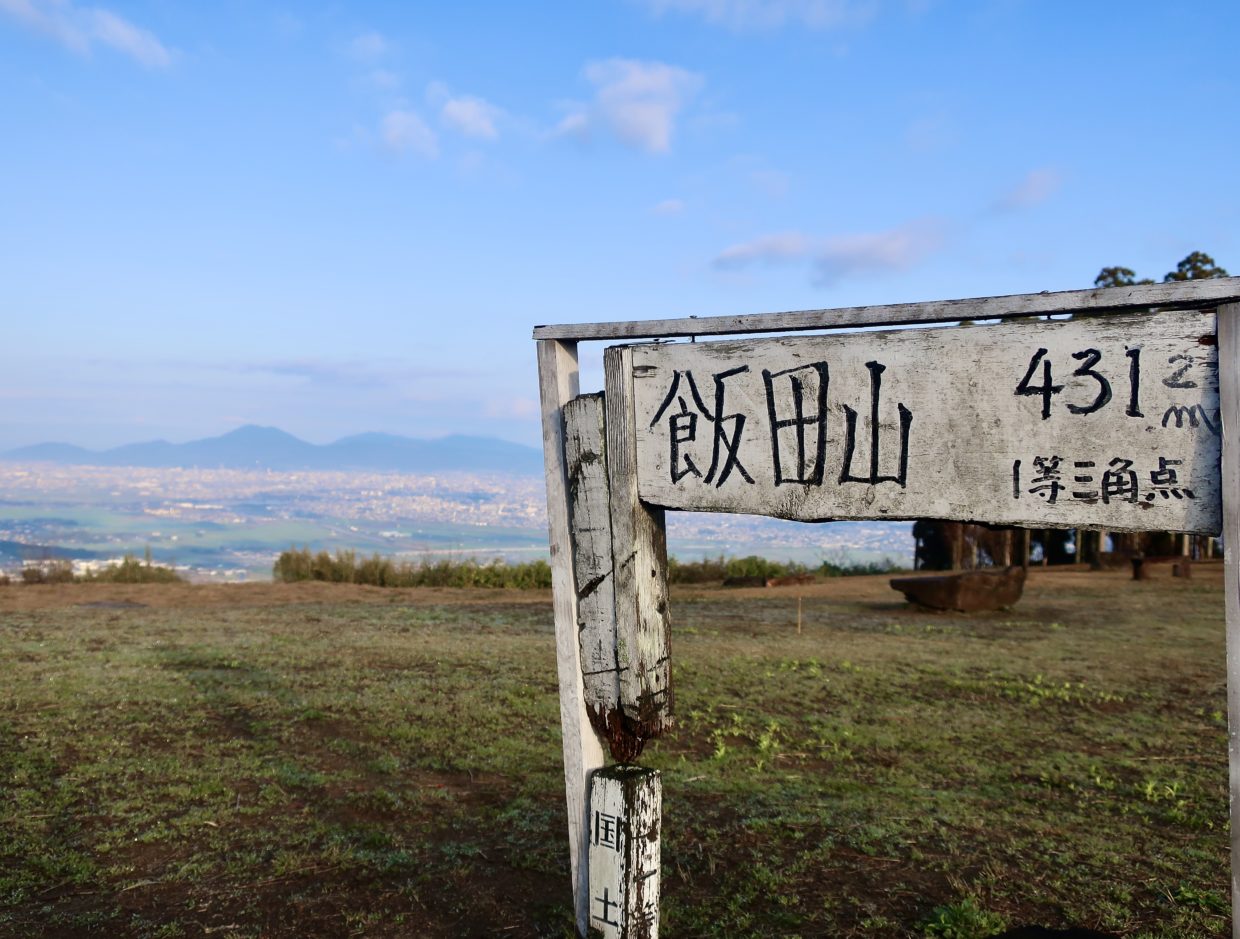 Every spring, Japanese people are excited to prepare for お花見(Ohanami, means Hanami picnic) and check Sakura(means Cherry Blossom) forecast to know when we have the picnic.

To avoid crowds and enjoy nature, my friend and I climbed 飯田山(Iida-san, means Mt. Iida) in 益城町(Mashiki town) at the beginning of March. Recently, we are fascinated by climbing and it has become our monthly event now. You may have heard of Mashiki town because of the huge damage by the earthquakes in 2016. I can’t believe it will be almost 4 years.

Let’s see how climbing Mt. Iida was and what is waiting for you onto the top!

For transportation, Mashiki town has Kumamoto Airport and the interchange of highway so it plays a role as a commuter town of Kumamoto City.

When it comes to Mashiki town, many people think of the earthquakes in 2016. At 9:26pm on April 14th in 2016, a magnitude-6.5 earthquake hit Kumamoto. Previously, people in Kumamoto believed that they didn’t and wouldn’t have much natural disasters so it was quite shocking when it occurred. What was more unexpected was that after 28 hours later, at 1:45 am on April 16th, we had another big earthquake and it recorded magnitude-7.0. On record, it was the first time that same area was hit by this size of earthquakes twice in such a short period.

What made us suffered was too many aftershocks. They recorded that in 6 months after the main earthquakes, we had had over 4,000 aftershocks. I still remember that I often felt that the land was swinging even it was not.

The most disaster-hit area was Mashiki town. Just after the earthquake, I had a chance to visit Mashiki town for work and I was very shocked how it was changed. I witnessed life can be changed instantly.

In this April, it will be 4 years after the earthquakes. Still now, many people can’t go back to their hometown. It has just been reported that over 4,000 people still live in temporary dwellings.

Another problem is even though some people have moved to new houses, some of them(especially, elderly people) can’t fit in and miss the old neighbors. Mental stress is not easily seen and people do not notice by themselves, either. It looks like a long way to go for taking care of both infrastructure and mental health care but people make progress one by one.

Now, let’s see how our climbing was. My friend and I climbed Mt. Iida at the beginning of March. As usual, we left Kumamoto City early, this time at 6:30.

On the way, we passed by 嘉島町(Kashima town) and we saw this fog covering the rice field. Because it was raining a lot the day before, we could see this scenery. Also, we could see sunrise from the mountain over there.

About a year ago, we visited 浮島神社(Ukishima shrine) in Kashima town and saw the beautiful sunrise.

Story About Mt. Iida(飯田山) and his rival, Mt. Kimpo(金峰山) ~Which is the taller mountain?~

Before moving forward, I’d like to share the interesting story about Mt. Iida. 飯田(Iida) literally means cooked rice and rice field. The name “Iida” is a popular surname in Japan but this Mt. Iida has another origin of its name.

In the eastern part of Kumamoto city, there is a mountain called 金峰山(Kimpo-zan, means Mt. Kimpo). In the past, Mt. Iida challenged Mt. Kimpo to prove which is the higher mountain. Mt. Kimpo didn’t take his challenge seriously and just said “It’s so obvious that I’m the taller one.”. Mt. Iida was offended by Mt. Kimpo’s behavior and responded “No, I’m the taller one!”.

Both took their feet down so they decided to measure by putting a bamboo gutter onto both mountains and pour water. Water flew to Mt. Iida and he was so embarrassed by it. He said “I will never start to say that I’m taller than you!” In Japanese, this “I will not start to say something” is translated into Japanese with Kumamoto dialect as “いいださん(Iidasan)” . That’s why it’s named “Iida-san”, means Mt. Iida.

I searched about Mt. Iida in advance and I found that there is a parking at 飯田山常楽寺 (Iida-san Joraku-ji Temple) which stands near the top of the mountain(It stands at 8th station of Mt. Iida). You can climb from the bottom of the mountain. Since we had had a busy days at the time, we decided to park near the temple and hike for a short distance. It’s good that we have options depending on our condition.

I have to say that some parts are narrow so it’s difficult to pass by one another. If possible, I recommend you to go there with smaller cars not with a big one.

This is the parking. The view from there is already good!

You can pick a bamboo stick here. It worked for us later so I really recommend you to borrow one.

Just in front of the parking, there is Iida-san Joraku-ji Temple. This stone stair looks interesting. I heard that the way they pile the stones is called “乱れ積法(Midare-tsumi-hou)”. I couldn’t find an English name but it literally means roughly piled stones. Even though they look “roughly piled”, don’t worry they are set well.

Climb the stone stair and you will see the gate of the temple. It seems like there are 3 guards standing confidently and protecting from evil!

It is said that Iida-san Jorakuji Temple was built in 12th century and is a temple of 天台宗(Tendaishu, means Tendai sect of Buddhism).

The garden is organized and you can see many plants.

I met a lady near the temple and she said in a week, we could see many flowers there(It was a little early!). At least we could see Sakura but maybe one-third in bloom?

At first, I couldn’t find the staring point, so we headed to the right side of the main hall.

There is this big bronze bell. It says that this is the symbol of reconstruction. To keep this bell in a good condition, please ring the bell once a person. And there is a bamboo bottle saying “おこころざし(Okokorozashi)” that means your kindness or courtesy so please put some money when you ring the bell.

There is a 鳥居(Torii Gate) saying “白山神社(Hakuzan Jinja)” and I wondered why. There was no worship hall nor main hall. You will see why later.

Hiking to the top of Mt. Iida(飯田山)

We found there is no road anymore so we went back to the main hall and tried the left side.

We found the path so followed it.

You will see this sign. It says if you go to the right path, it’s a steep shortcut and the left side is a gentle slope but takes longer. We chose the shortcut and moved forward.

Then we reached the point of this sign, “急な登り坂(Kyu-na nobori-zaka, means very steep uphill)” and “男坂(Otoko-zaka, means Man Slope)”.

It says it’s just a 130m so we were not worried about it at all. But as I said, it rained the previous day so the slope was too muddy and slippery! We felt it was such a long slope!!

We could see the glimpse of the Torii gate and it’s almost at the top!

At first, you will see 白山神社(Hakuzan Shrine). The Torii gate we saw near the temple was for this shrine! Torii gate is a path where gods walk and usually it leads to the main hall.

When you see the right side, you will see a sign saying it’s observatory.

60m more to the top of the mountain!

I was fascinated by this panoramic view!

This is the top of Mt. Iida and you can overlook Kumamoto City. It’s 431m but we didn’t feel that way because we just climbed 130m(we felt much longer, though…).

You can see Edu lake(which is told to be created by the quarrel between Mt. Iida and Mt. Kimpo), Midorikawa River which is running the left side. Also you can see Mt. Kimpo over there.

There is a statue of Buddha. Around the statue, there are some 梅(Ume, means prom tree) and it looks like the Buddha has a halo around him.

It was around 8am and such a refreshing morning. I brought some spring Japanese sweets so we enjoyed them with green tea. We had a good time having a nice picnic and enjoying the great view.

When we returned, we decided to take the easy gentle path. Just behind the main hall of the shrine, we came across this beautiful scenery.

The trees, fog and sunlight created such a beautiful serendipity.

The small pond next to the main hall. It’s a proof of an inglorious defeat for Mt. Iida but if it’s this beautiful, it was worth to lose!

I looked up in the sky and happened to see these broccoli trees.

It was a gentle path so we just enjoyed walking and taking pictures.

It shows the direction of the temple.

Climb Mt. Iida(飯田山) and enjoy the season at most!

After climbing, we were walking around Jorakuji Temple.

We found these plants. They are beautiful holding rain drops onto them.

It’s such a difficult situation we are in and we are under a lot of stress but because of this, let’s go into nature and just feel it. We are going to climb Mt. Kimpo soon so look forward to it. This is one of the beautiful season in Japan so let’s enjoy it at most!