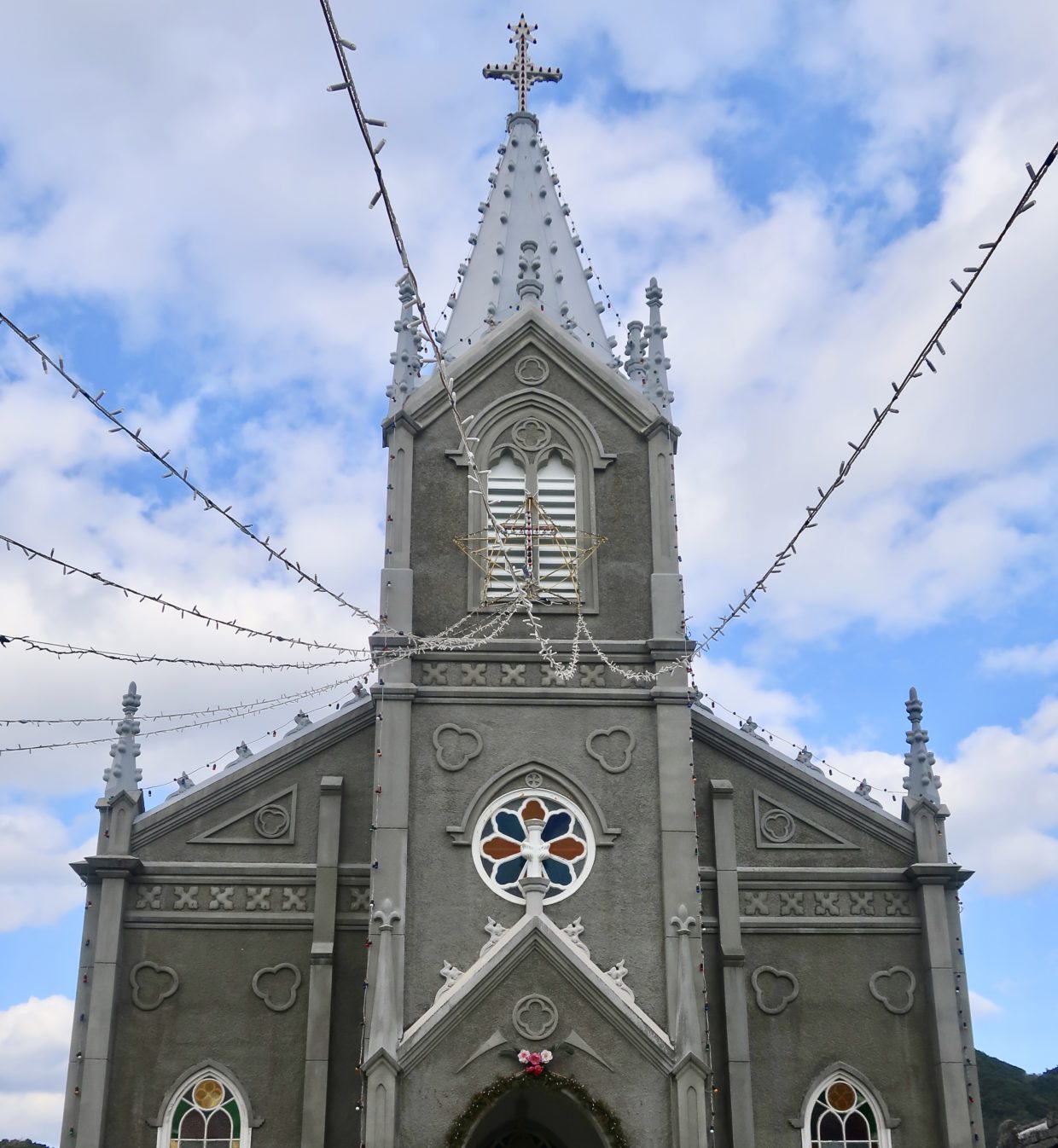 From this time, I’d like to introduce you this amazing area,  天草(Amakusa).

Amakusa is surrounded by the beautiful blue seas, which are East China Sea, Ariake Sea and Yatsushiro Sea. 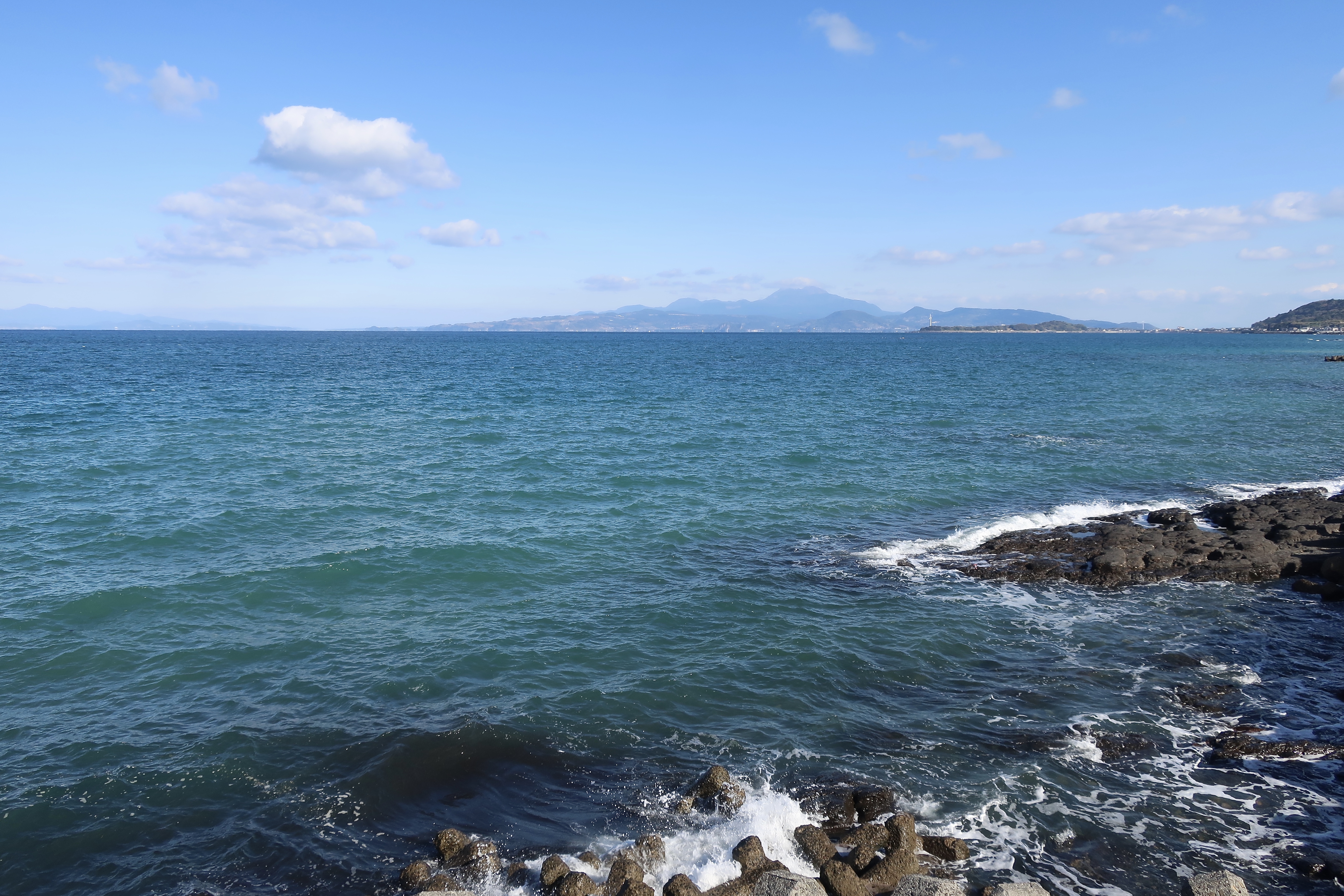 It’s an archipelago and consists of about 120 islands.

Amakusa is connected to Kyushu-island with 5 bridges, which is called 天草五橋(Amakusa Go-kyou, means Amakusa five bridges). 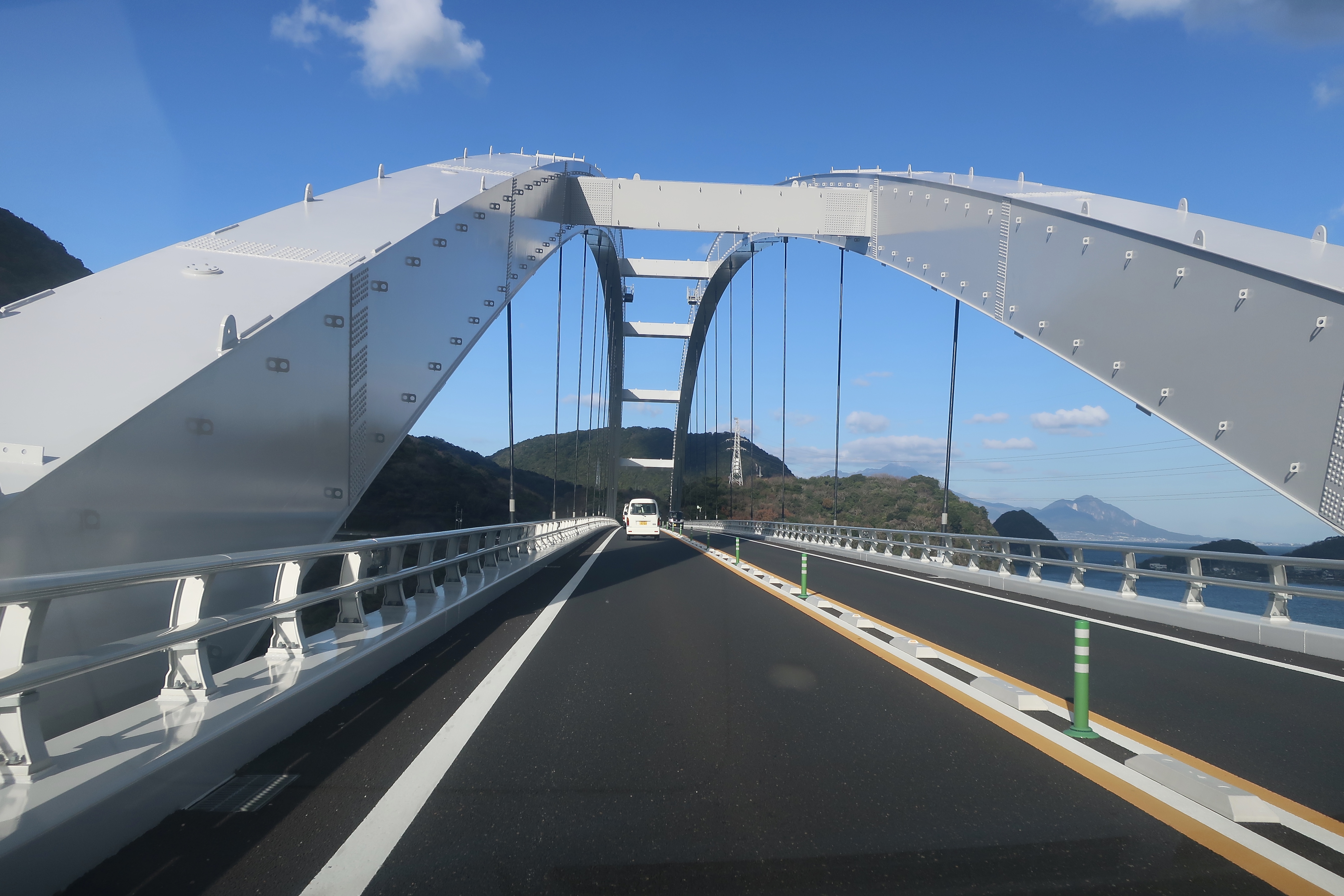 Thanks to the mild climate, they have rich source of seafood.

You can enjoy wild-caught fish and there are many local fish stores and restaurants. 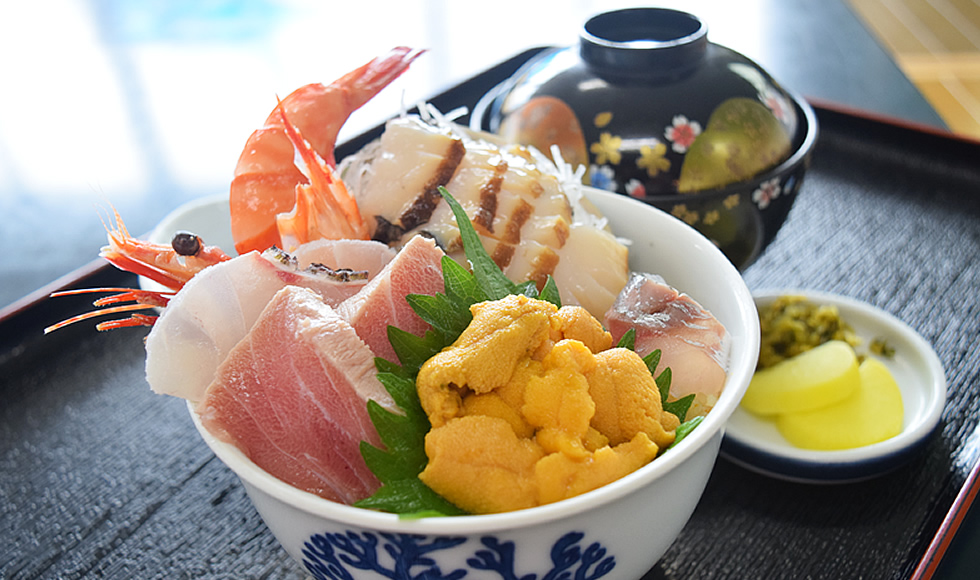 Also, the plenty of sunlight and nice sea breeze enable them to get good quality of fruits, especially citrus fruits in Amakusa has great value. 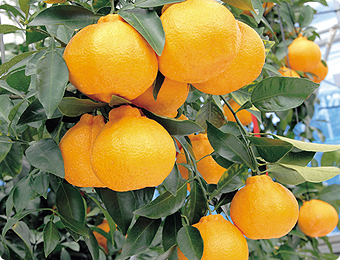 Interestingly, they can also get a good olive because the climate is similar to Italy.

Whole Amakusa belongs to 雲仙天草国立公園(Unzen-Amakusa National Park). It was registered as the first National Park in Japan. 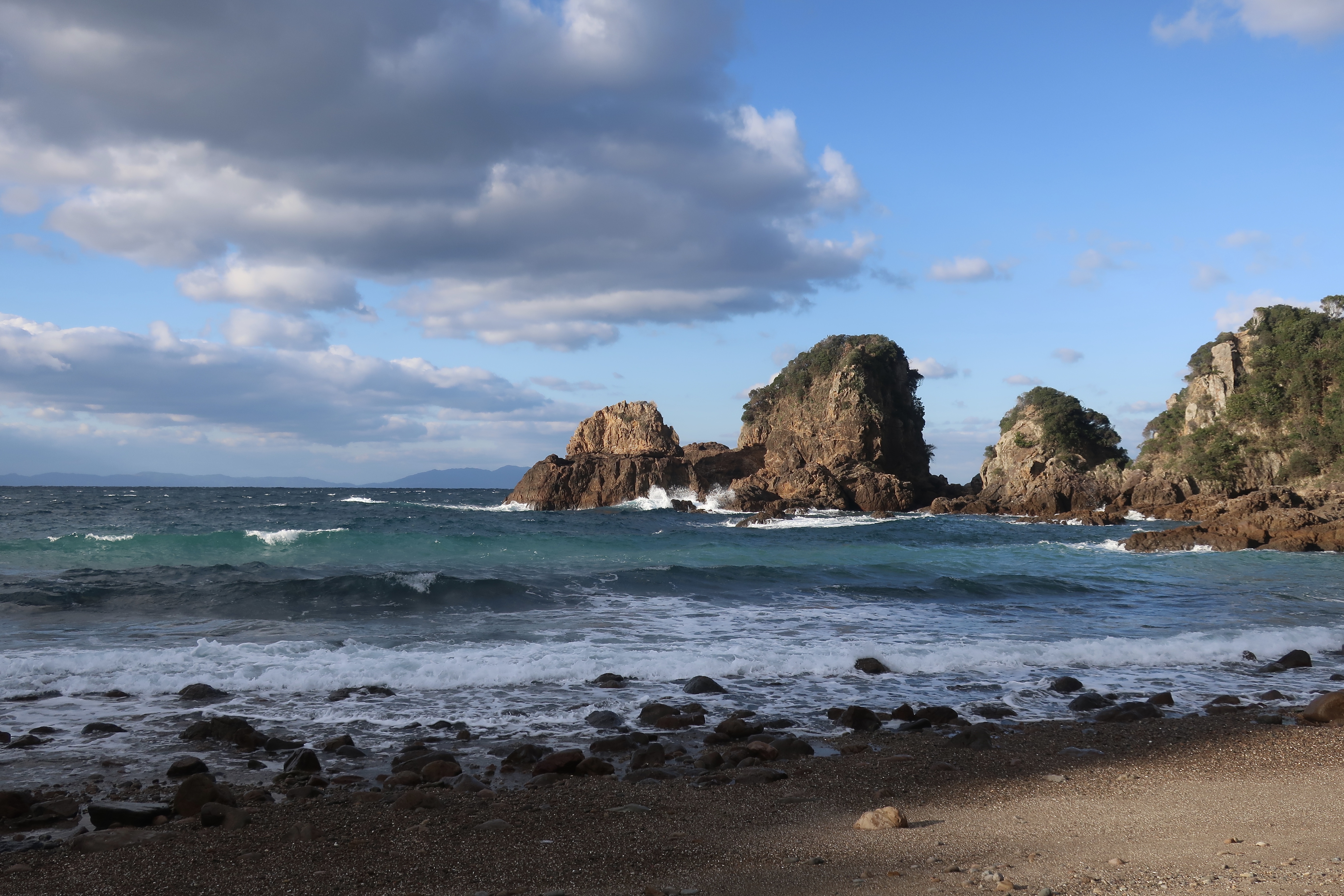 You will enjoy the beauty of untouched nature.

Sunset is one of the Must-See. 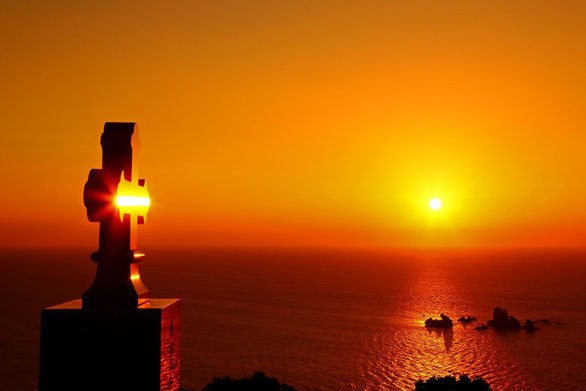 In Amakusa, there are many unique cultures which developed by the influence of new culture from Europe.

It integrated into the local culture, which have attracted many people.

You can go to Amakusa mainly by car, bus, plane and cruise.

There is no railway in Amakusa so if you use train, you should get off at 三角駅(Misumi Station) which is in 宇城市(Uki-city) and hire a car or take a cruise.

In the 16th century, Christianity was introduced by Portuguese missionaries. 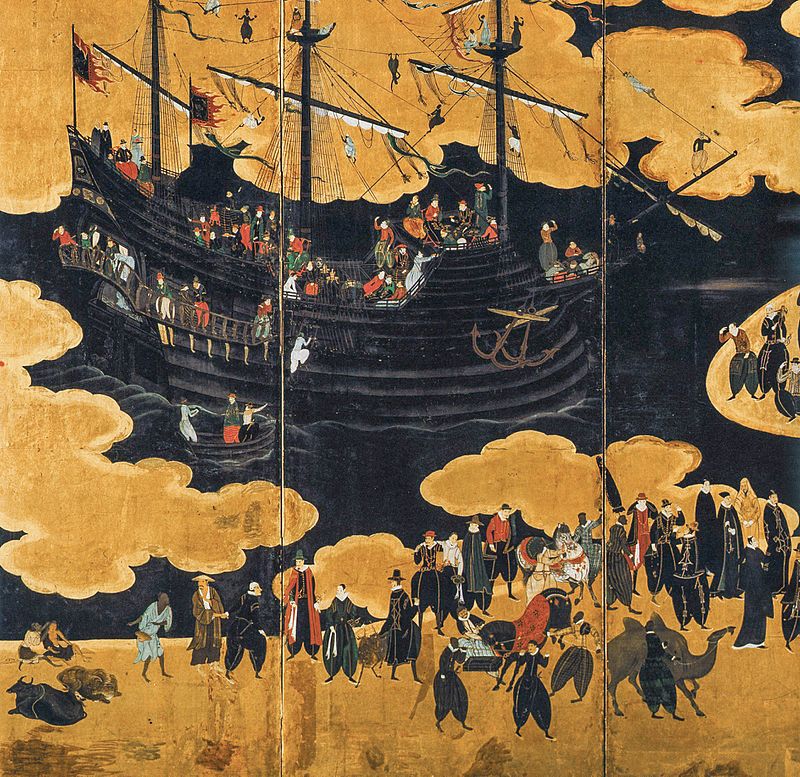 At that time, Nagasaki was open to the world and many Portuguese business men used to come.

There used to be “Collegios” which means seminaries(the word “Collegios” is the origin of  “college”).

But at 1614 , Edo Shogunate(Japanese federal government) enforced the persecution of Christianity.

They were afraid of its effect on people.

There are several reasons that the government was afraid of them.

・Be afraid of peasant revolt. People might disrespect the Shogun if they have faith in God.

・The Christianity idea of  “It’s equal in front of God” wasn’t convenient for the Shogunate to maintain their power and the idea of following the hierarchy.

・Feudal lords in Nagasaki and Amakusa was becoming rich through the trade with Spain and Portuguese. The Shogunate was concerned that these lords would have more power, money and weapons than the government.

How did Hidden Christians in Sakitsu village Amakusa keep believing in Christianity?

Even under the prohibition of Christianity, Christians in Sakitsu didn’t give up.

Most people in Sakitsu have involved in fishing. 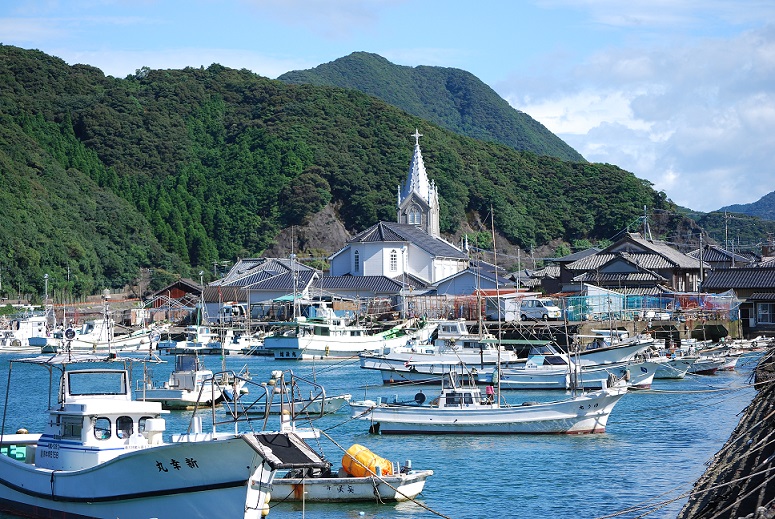 Deus was worshipped as the God of prosperous amount of fish.

They made goods for praying from seashells. 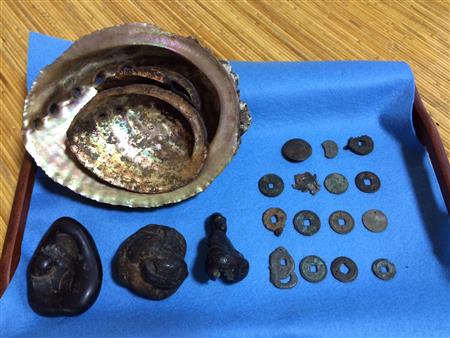 They used to keep praying secretly using these goods and hiding them in pillars and attics.

Because of the strong will of hidden Christians and unique way of practicing it, these places have great importance till the current time.

Also, Christianity could coexist with Shintoism and Buddhism in this small fishing village.

By these facts, Sakitsu Village was registered to World Cultural Heritage as Hidden Christian Sites together with other sites in the Nagasaki Region. 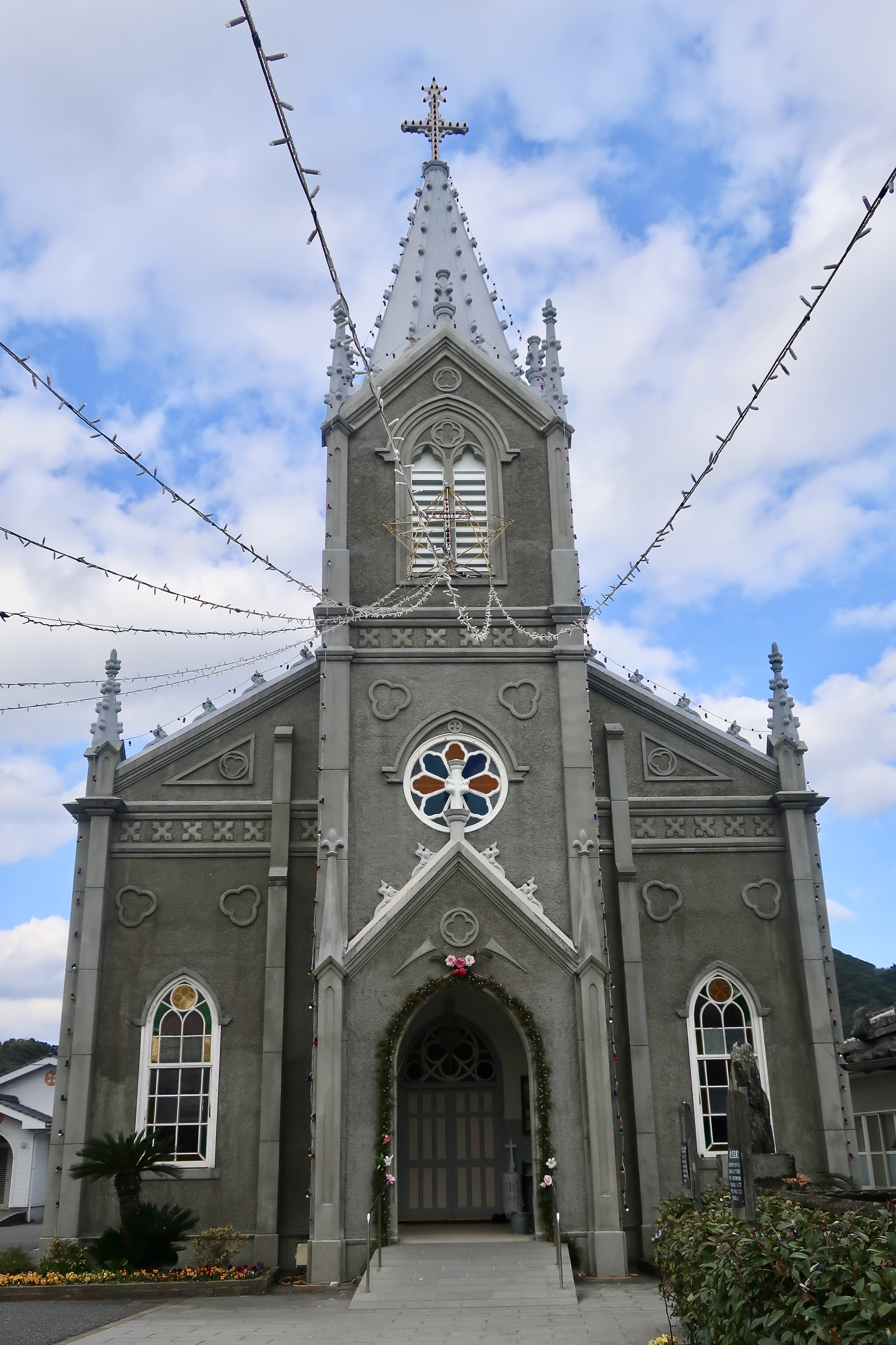 It was built in 1934 and designed by 鉄川与助(Yosuke Tetsukawa) who was a carpenter from Nagasaki and had participated in building other churches in Nagasaki.

At that time, Japan was convinced to open to the world again and European Christians began to come.

At first, they were surprised to see local people who had secretly kept practicing Christianity for over 240 years, even under the severe persecution.

Because of the strong wish from Father Luis de Almeida, the present church was built on the site of the village headman’s house in 1934.

At the house, 踏み絵(Fumie), which is the symbol of Christian oppression , was taken place. 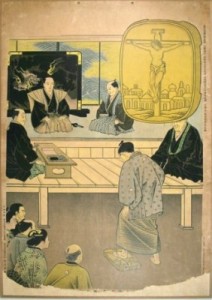 ※ Fumie was used to find hidden Christianity. The government prepared a tablet with the image of Christ and asked suspected Christians to tread on it to prove themselves non-Christians. At that time, some hidden Christians tried to survive this severe situation to secretly put a piece of paper under their feet so that they didn’t touch their feet onto the picture of God directly.

The church’s alter is placed on the very spot where Fumie plate was used to be.

The unique thing about Sakitsu church is the floor. 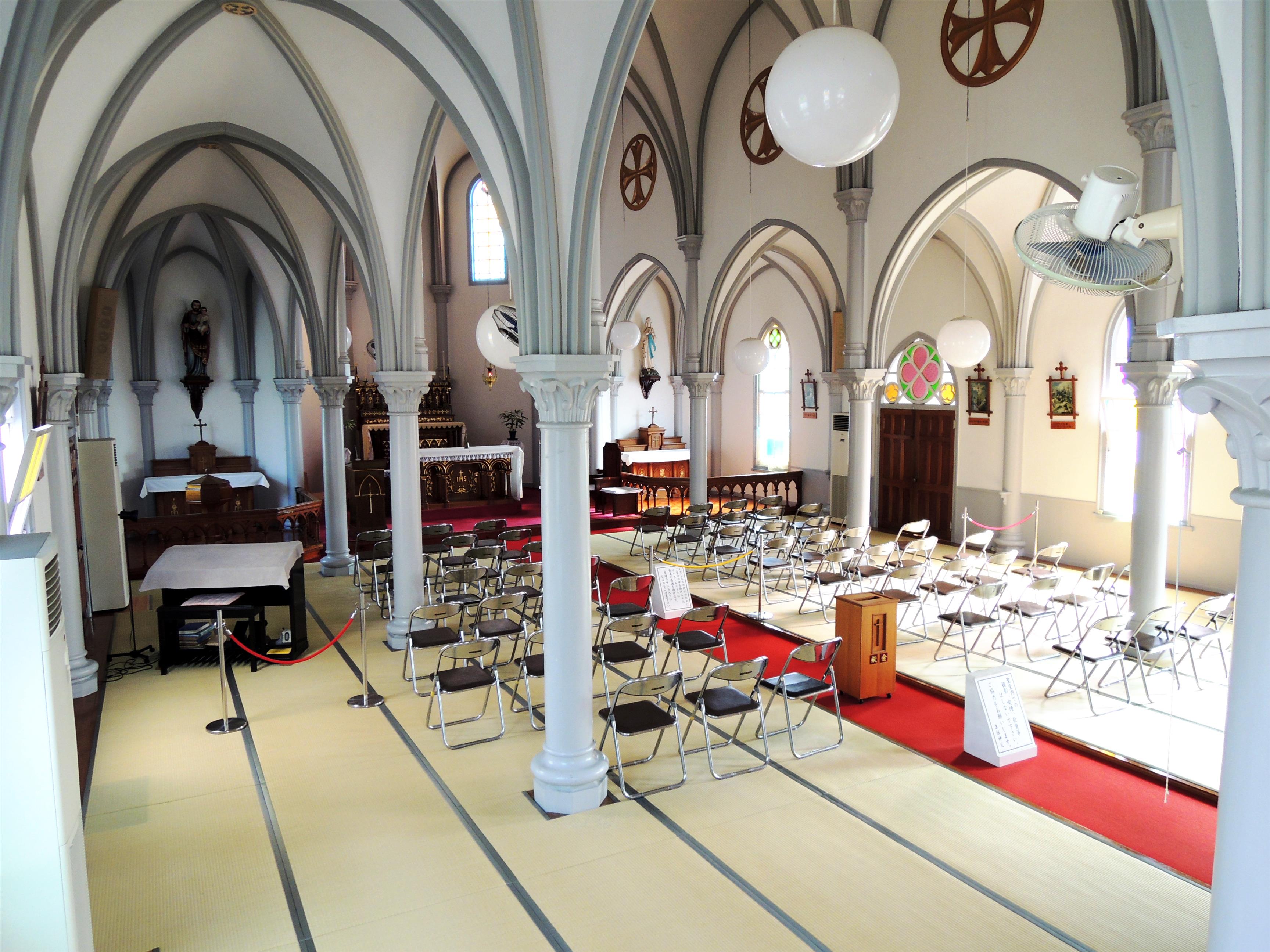 From the beginning, they used tatami mat which is traditional floor in Japan. 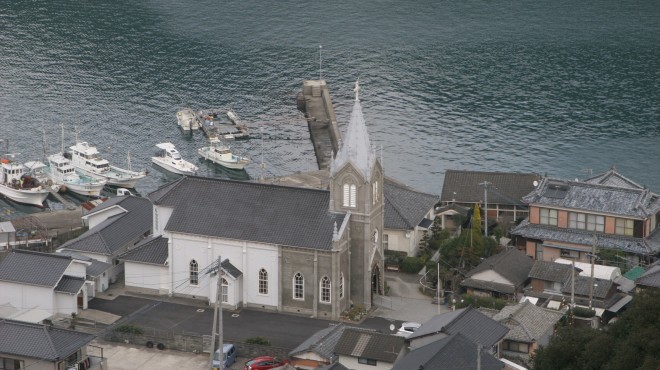 Observing the church from the side, you’ll notice that the front part is made of wood but some parts are made of concrete.

This is because they didn’t have much budget.

The budget was from the priest’s private fund and donation from Christians.

Christians in Sakitsu tried not to rely on administration because they were still afraid that the government might have another restriction so they needed to complete it by themselves.

When the Christian found that they were lacking in budget and couldn’t buy more concrete, they used wood instead.

Walk around the church and get a glimpse of strong will of people at that time.

Where to learn more about Hidden Christians in Sakitsu village Amakusa.

There is みなと屋(Minato-ya) which is a museum to introduce the history of Sakitsu village. 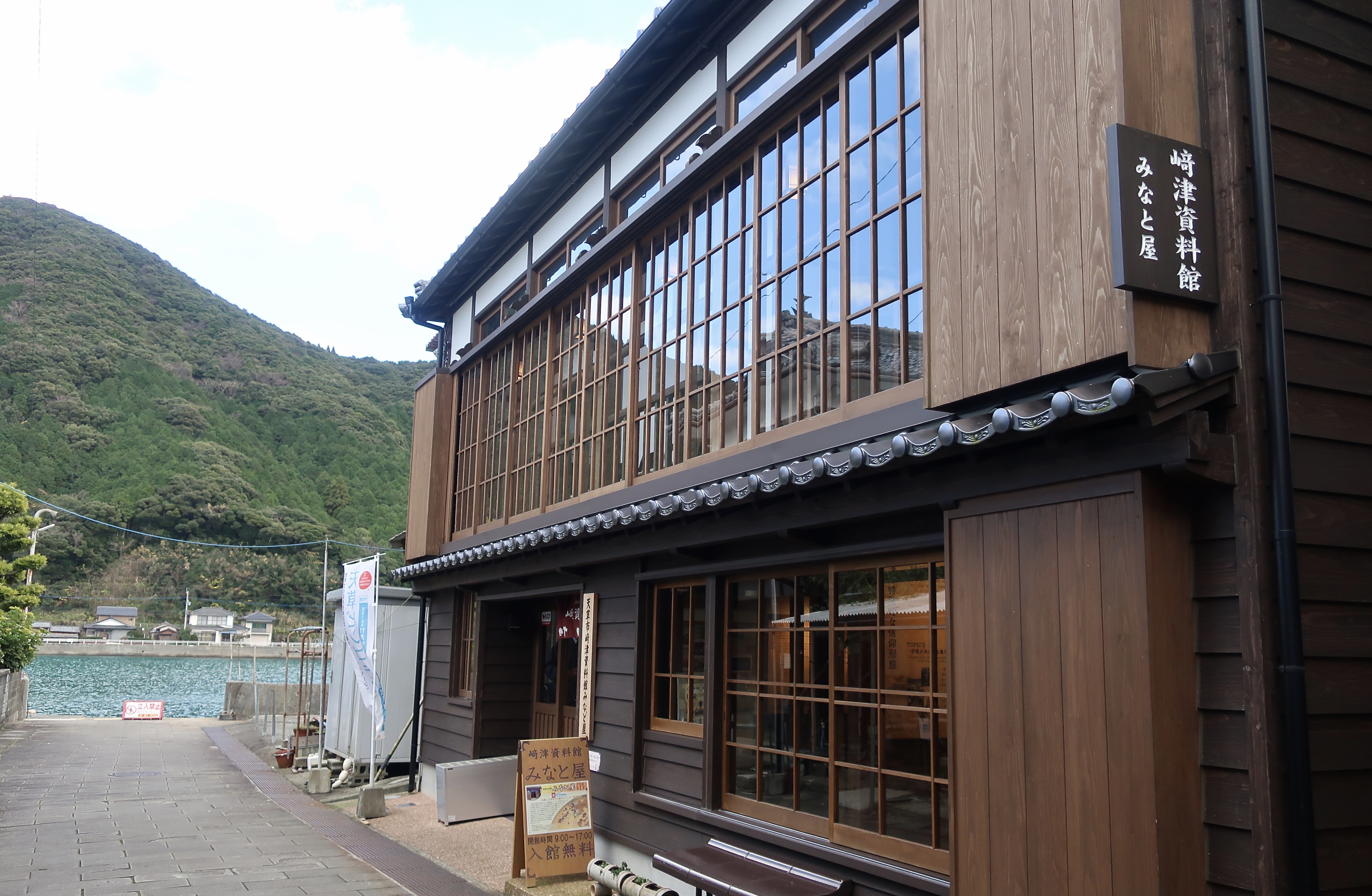 Minato-ya was built as a hotel in 1936 and they renovated it into a museum, which opened in 2016.

You can enjoy the beauty of the building made by craftsman at that time.

The museum shows us goods used for praying in secret, such as medaille,  seashell, etc.

People used the seashells for praying because they saw Maria inside of them.

Filling up the water, the picture will be more clearer.

The fishing village has made unique way of praying.

Unique and Ingenious Ideas for Living in Sakitsu village Amakusa.

When you walk around Tsusaki village, you’ll see these narrow paths which are called トーヤ(To-ya). 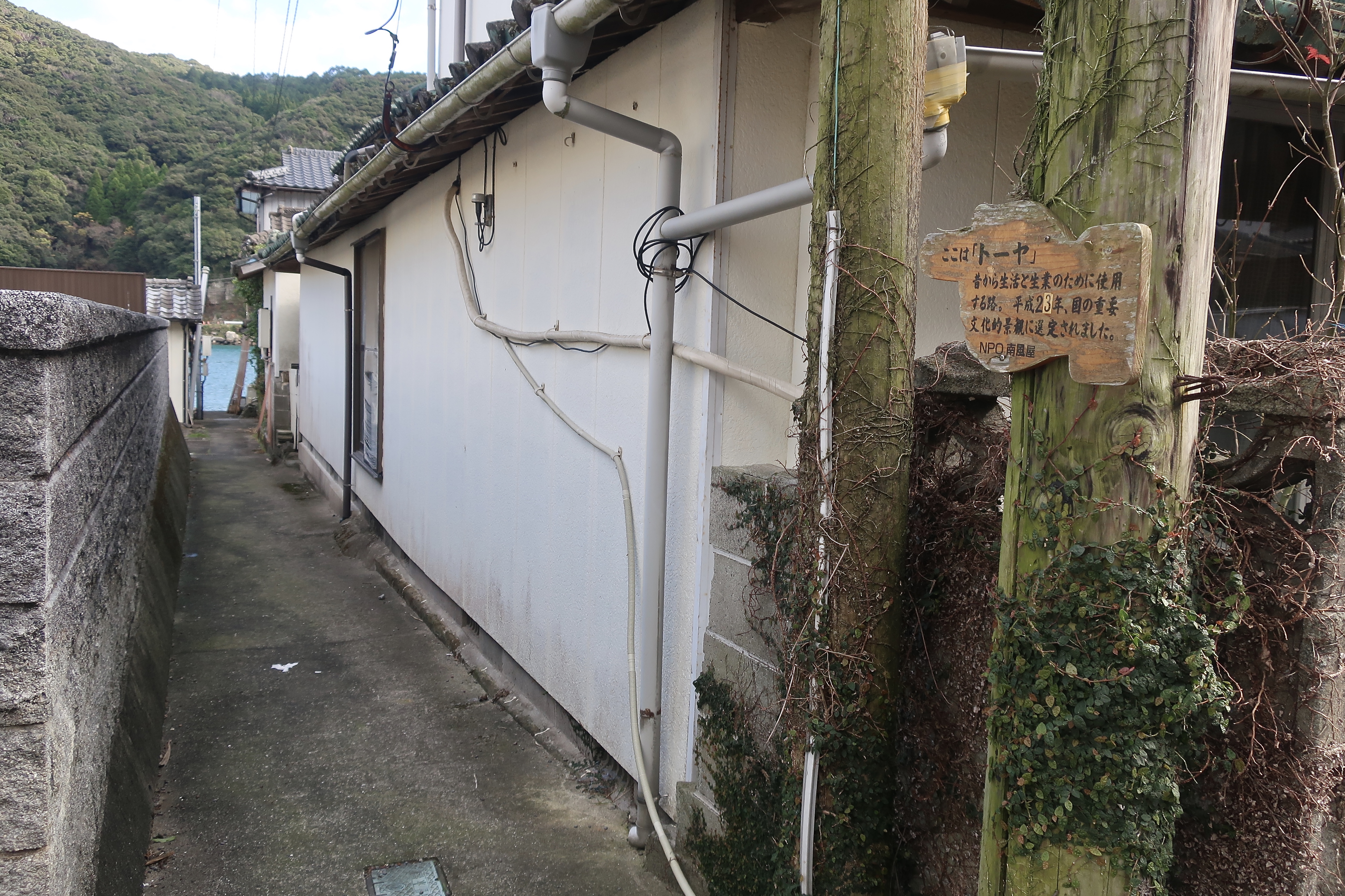 Many villagers have involved in fishing, so the access to the sea was important.

Since people make a living by fishing, they need space to deal with fish.

カケ(Kake) is an also a good idea to solve the lack of workplace. 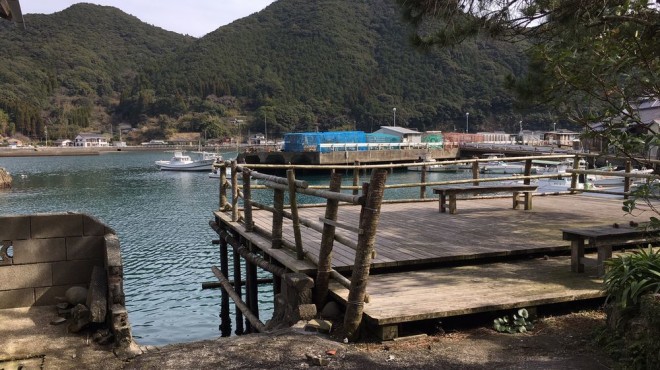 You’ll see wooden decks which are on the sea and fisherman used them for cleaning fish, make dried fish on the net and making fish products.

People in Sakitsu had met a new culture, religion and people and they’d broaden their horizon. They had open-mind.

Also the bond between the local was much tighter than the Shogunate expected so that people in Sakitsu could keep believing in Christianity for over 2 centuries.

Even though many places related to Christianity at that time were destroyed, you’ll feel how people purely kept faith in the religion and devoted their holy life to protect it. 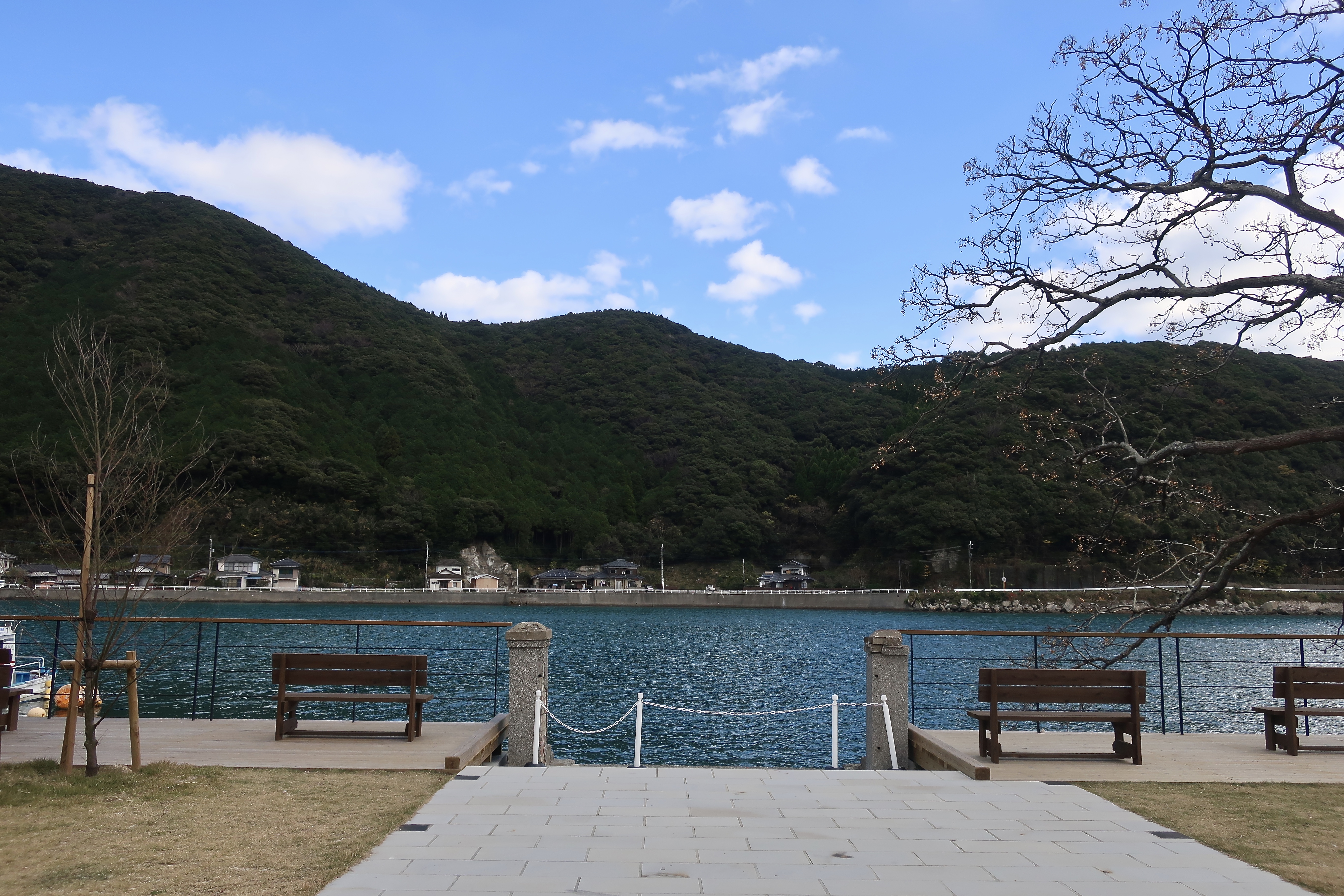