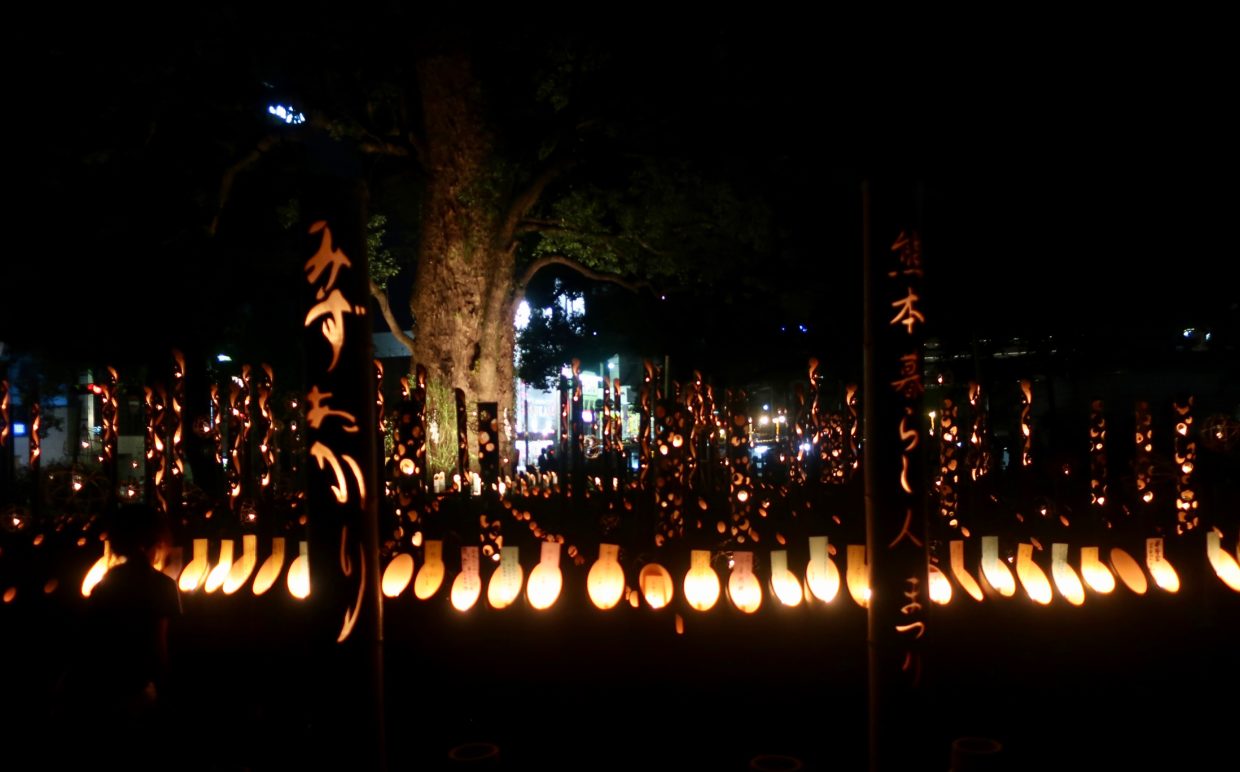 On October 7th, we had a festival called ‘みずあかり(Mizu-akari)’.
It was supposed to be a 2-days event but due to the latest typhoon, they had decided to hold the event just for one day and also shrink the size of the venue, which was almost half.
Mizuakari started from 2004.
This festival highlights resources in Kumamoto, such as bamboo, fire, water and candles.
During the festival, about 54,000 candles in bamboos are lit and decorated around Kumamoto castle.
The aim of Mizu-akari is that they want people to rediscover how amazing Kumamoto is and share the pleasure of living here.
The unique thing about Mizu-akari is that it is held by almost 6,000 volunteers and they value the process of making it not just the result. 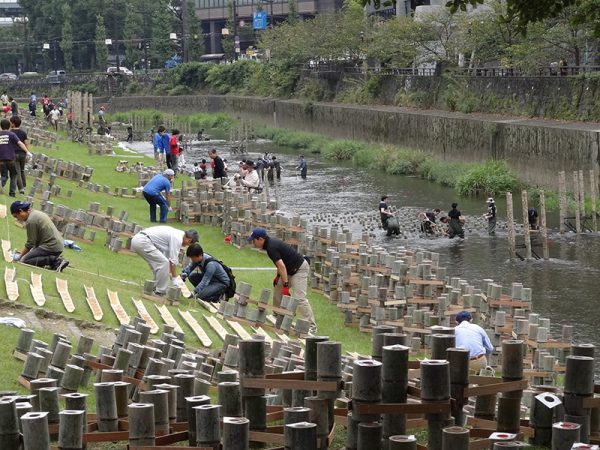 The budget of Mizu-akari is consisted of donation from local companies, not from the local governments.
People, such as local volunteers, companies, students, civil servants, people from Self-Defense Forces etc. cooperate and unite to make this event successful.
The main venue is 花畑公園(Hanabata-kouen, means Hanabata-park).
There used to be a shrine, called 代継宮(Yotsugi-gu, means Yotsugi shrine) until it was transferred to Tatsuda area(400 years ago) which is in the northern part of Kumamoto-city.
Since Yotsugi-shrine was built, there has been 御神木(Goshin-boku, trees which are deified. 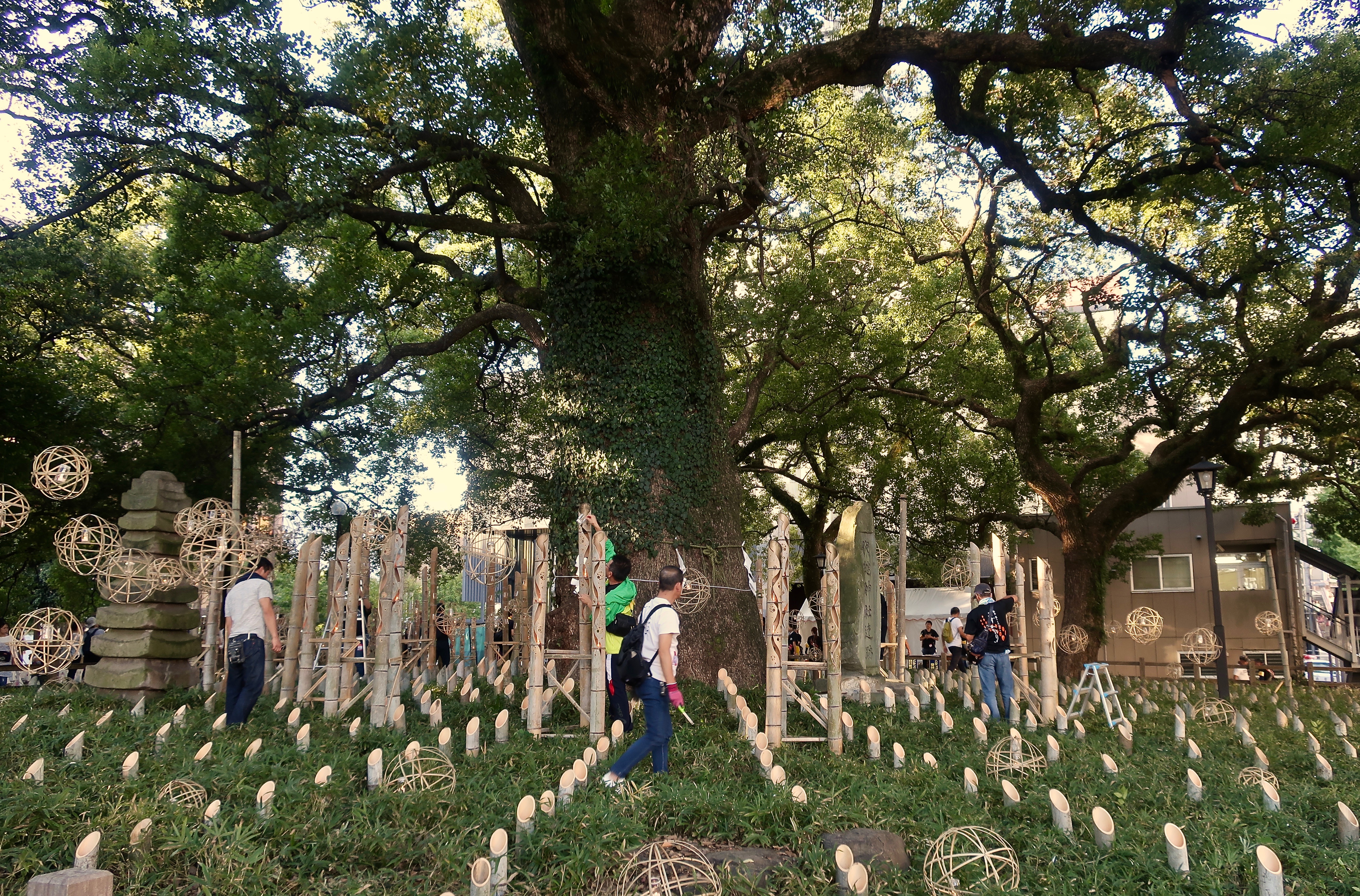 Also, there used to be a house of Hosokawa in Edo period, and during the world war II, there were some facilities of armies and after the war, people gathered and acted protest.
So that means people always used to gather around Hanabata-park in the history.
Nowadays, sadly people don’t use that park any more.
So when they started to plan Mizu-akari, they decided to use Hanabata-park as the centre venue.
From 5pm, there was an opening ceremony in Hanabata-park. 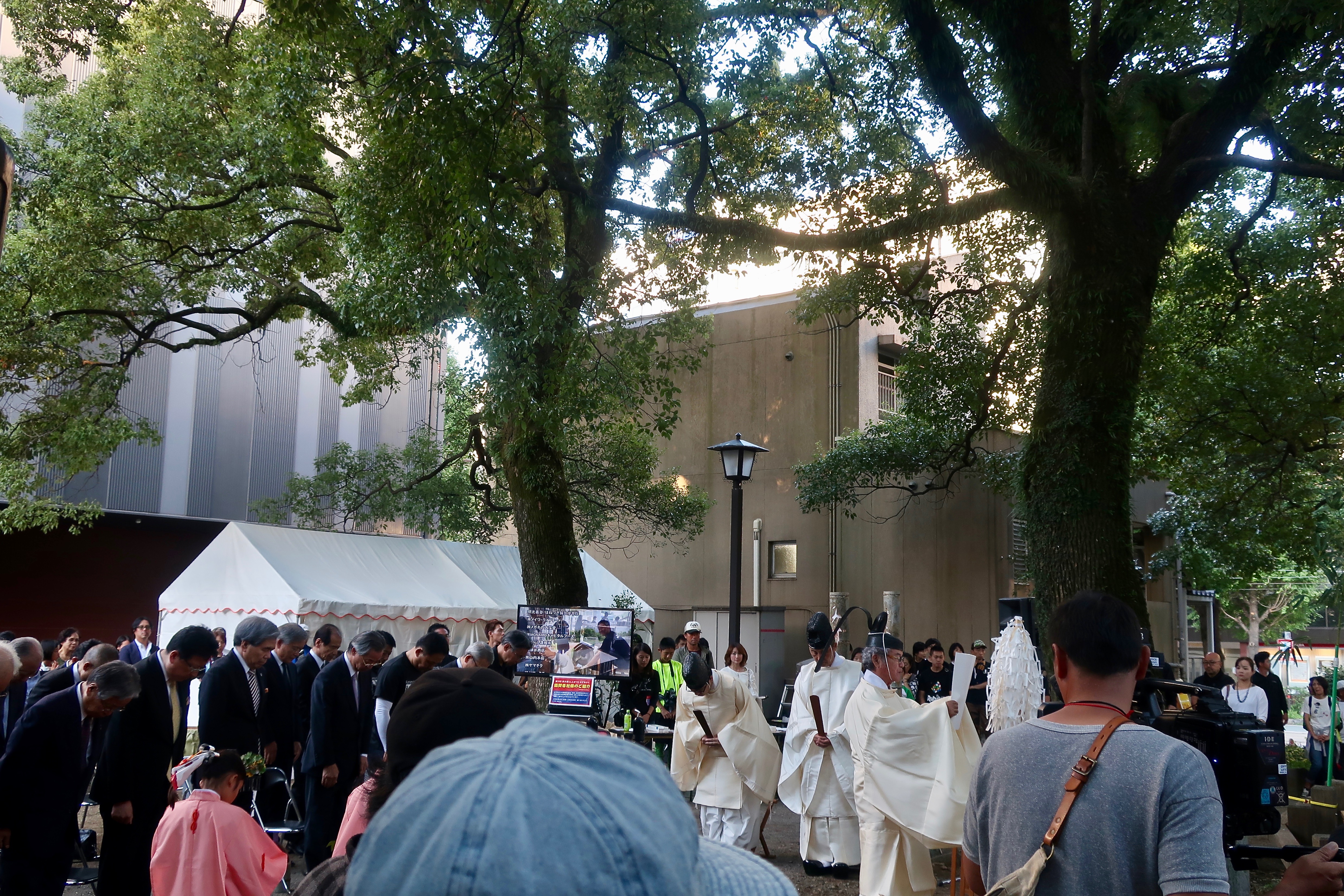 The priest of Yotsugi-shrine proceeded the ceremony.
Three 巫女(Miko, means shrine maids) who looked like around 10-year-old performed a ritual dance and welcomed the god of Yotsugi-gu to Hanabata-park during the festival. 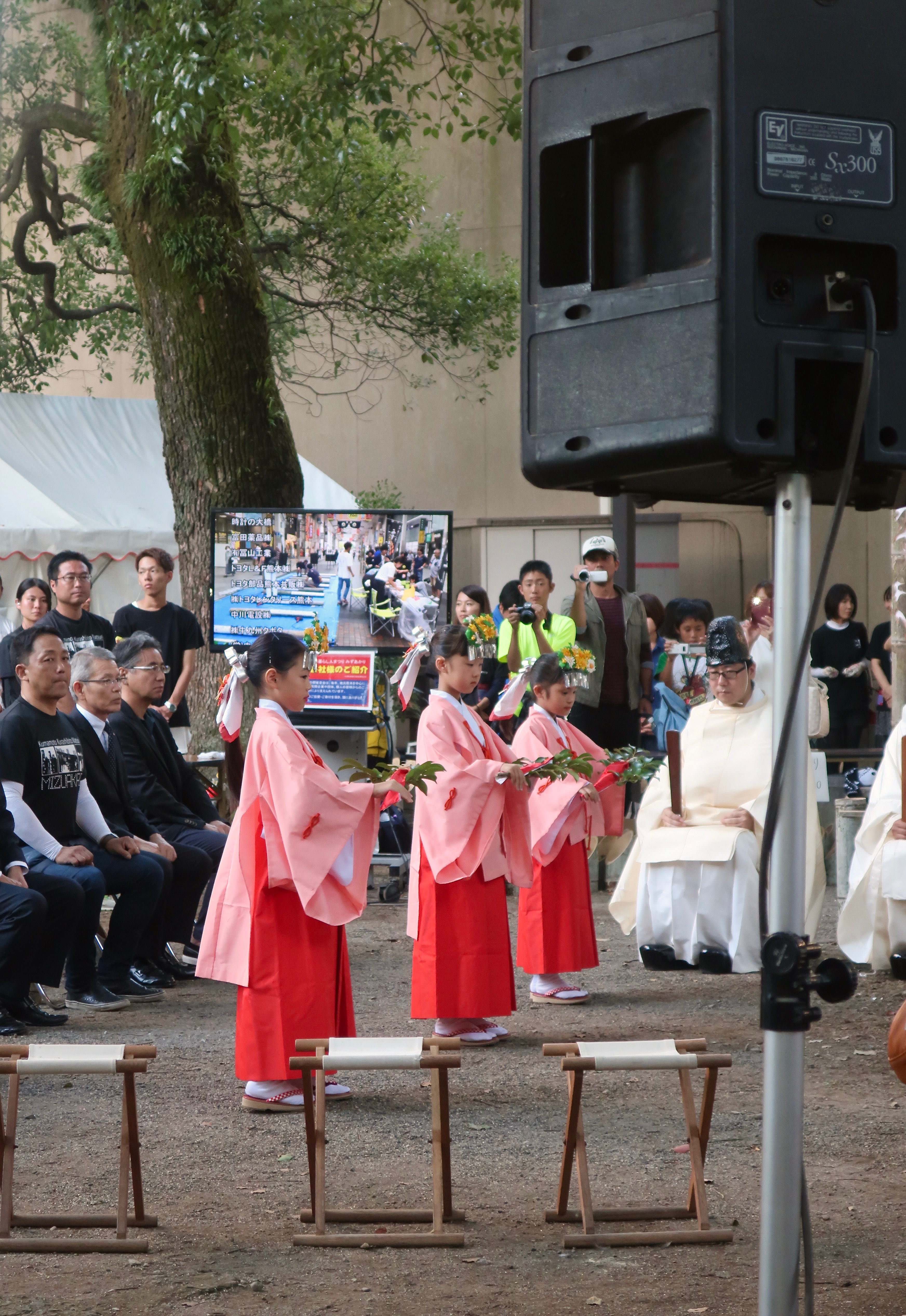 It was a sacred moment and I was fascinated by their performance.
Big and wide size of bamboos were decorated with people’s wishes on the papers. 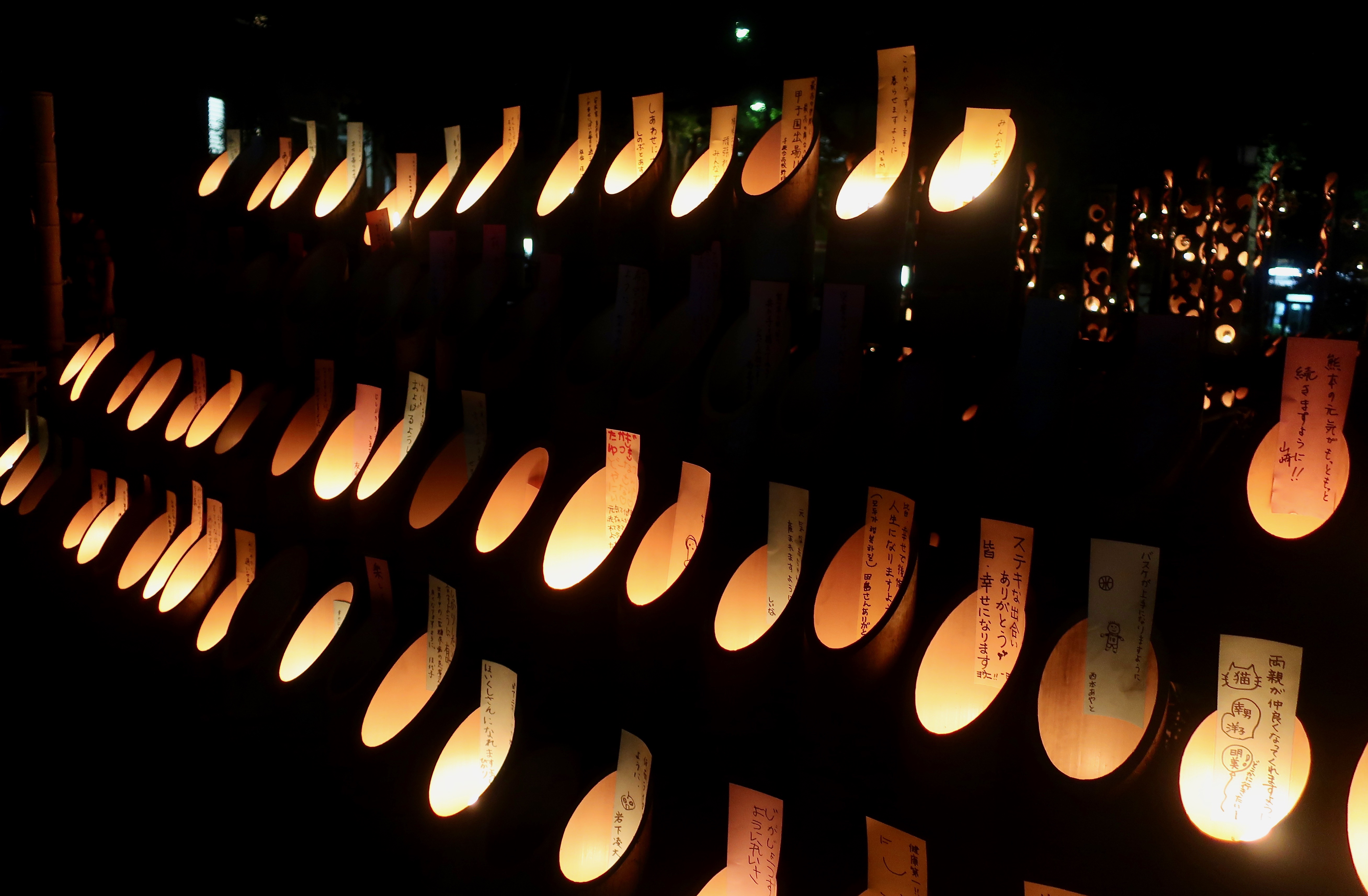 This sacred fire which was purified in Aso had been carried and torched to candles in bamboo pipes.
(After Mizu-akari, the organizers dedicated the papers to Yotsugi-shrine.) 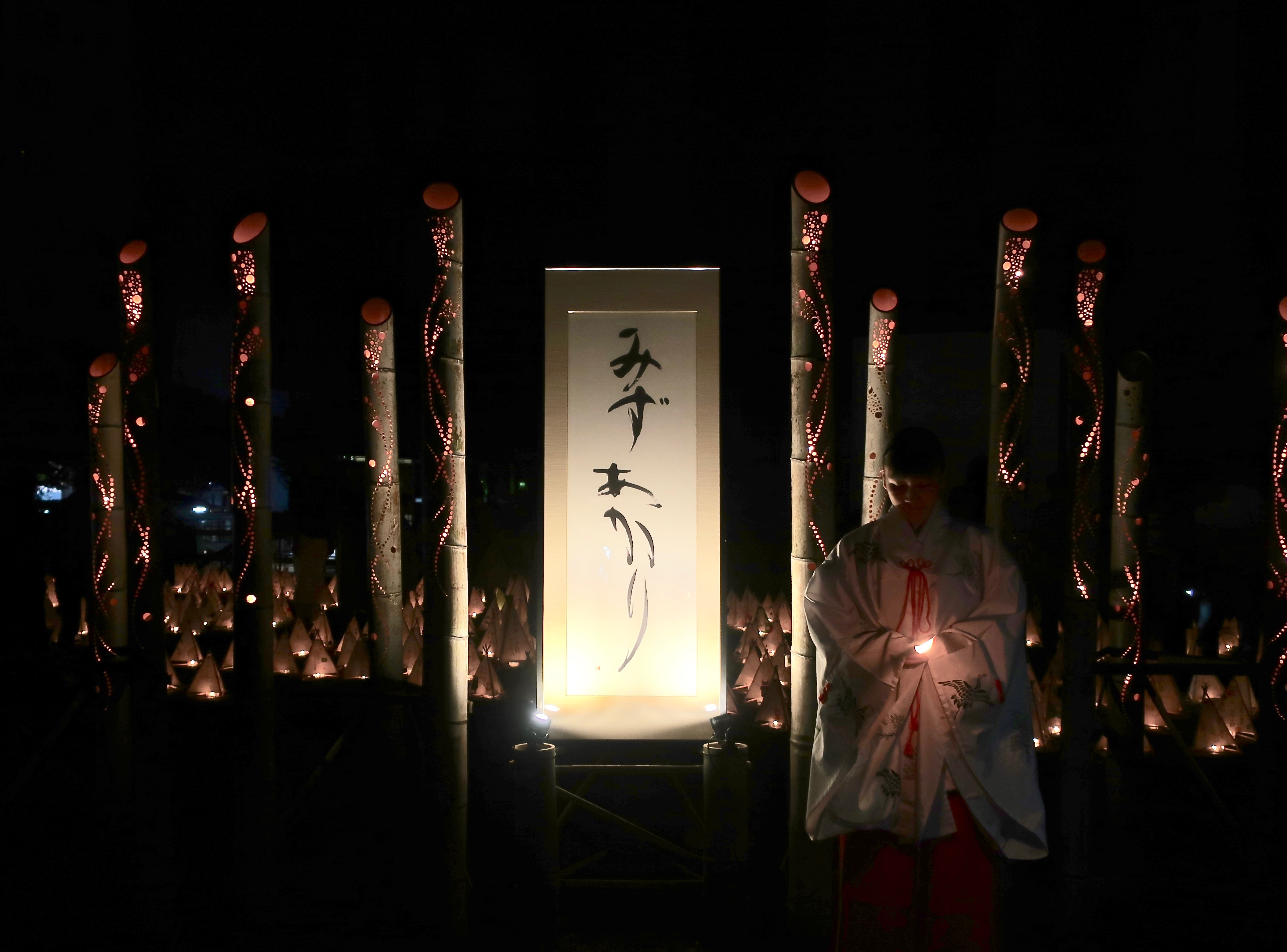 和ろうそく(Wa-rousouku, means Japanese candles) which are used for the ritual ceremony were made from 櫨(haze, means Japanese wax tree) in 水俣(Minamata), southern part of Kumamoto. 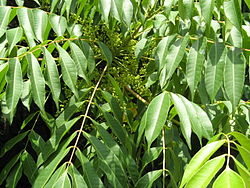 I didn’t know but Kumamoto is the largest producer of haze wax in Japan.
In Kumamoto castle, there is a gate called ‘櫨方門(Hazekata-mon, means Hazekata-gate)’ and that means there had been a strong connection between Kumamoto castle and Haze. 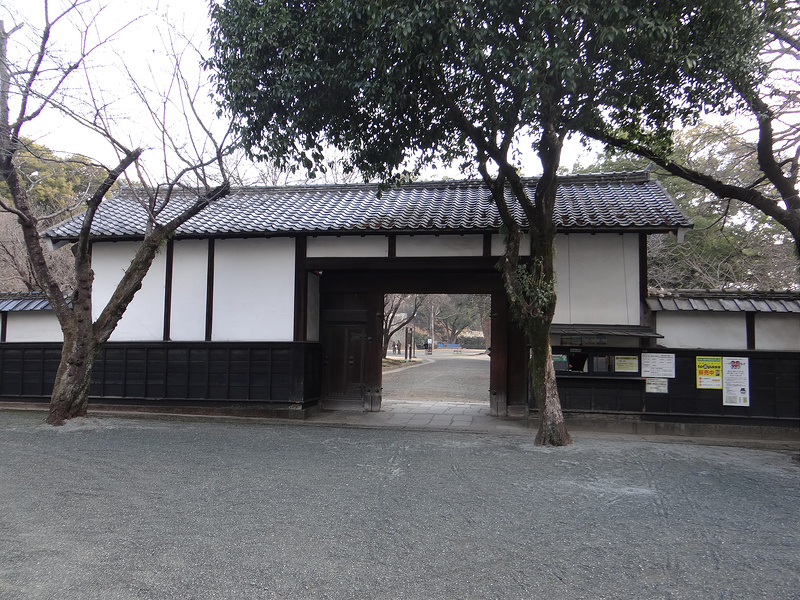 Paper lanterns are placed nicely and local students and groups joined and drew on the paper. 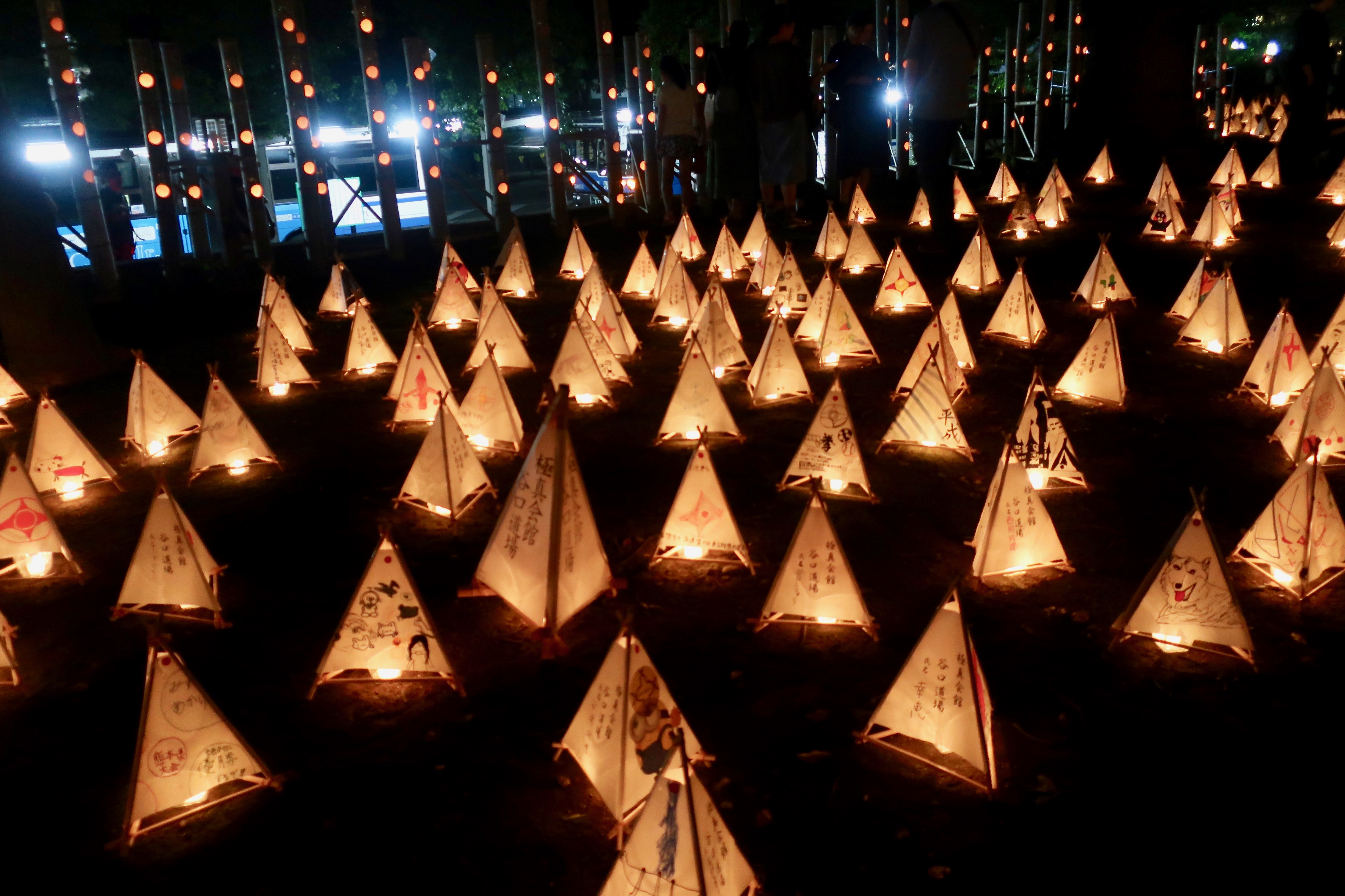 Children tried to find their lanterns and got so excited to see them lighten up.
Can you see ones with Anpanman, Pokemon or other anime characters??
Next to Kumamoto castle, there is 城彩苑(Jousai-en) where restaurants and shops are there. 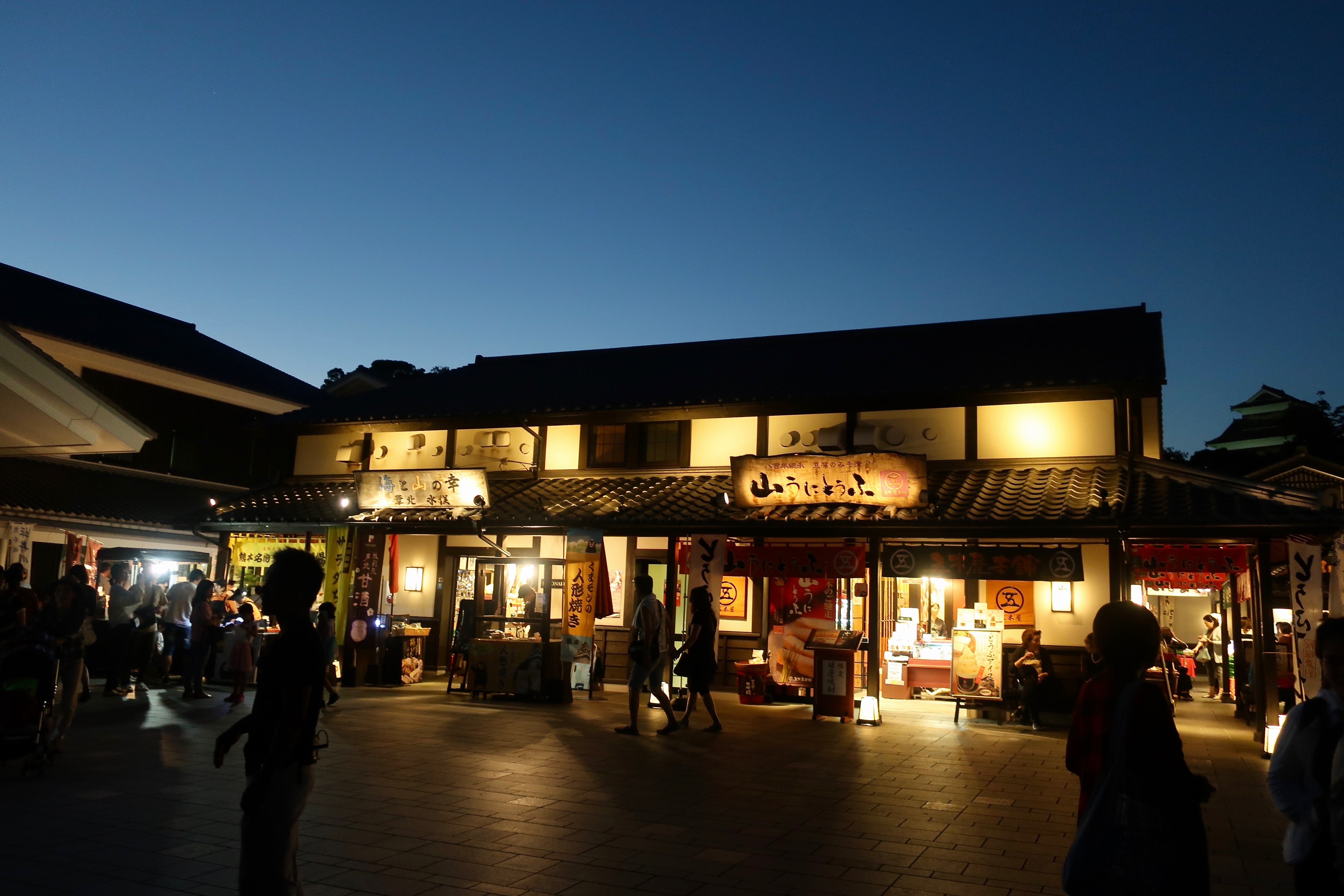 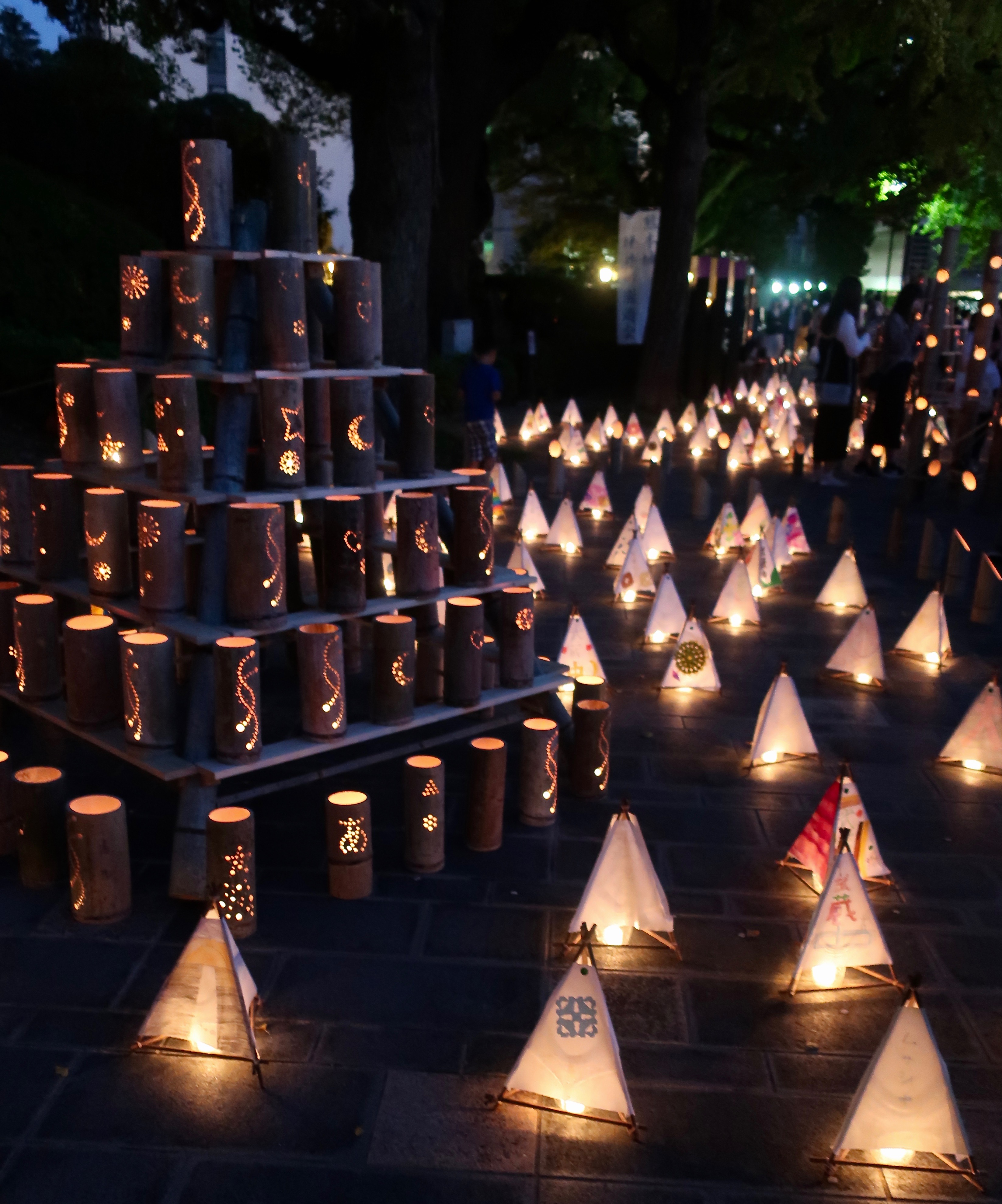 During Mizu-akari, there was a music and dance performance by 坪井川遊園会(Tsuboigawa-yuenkai). 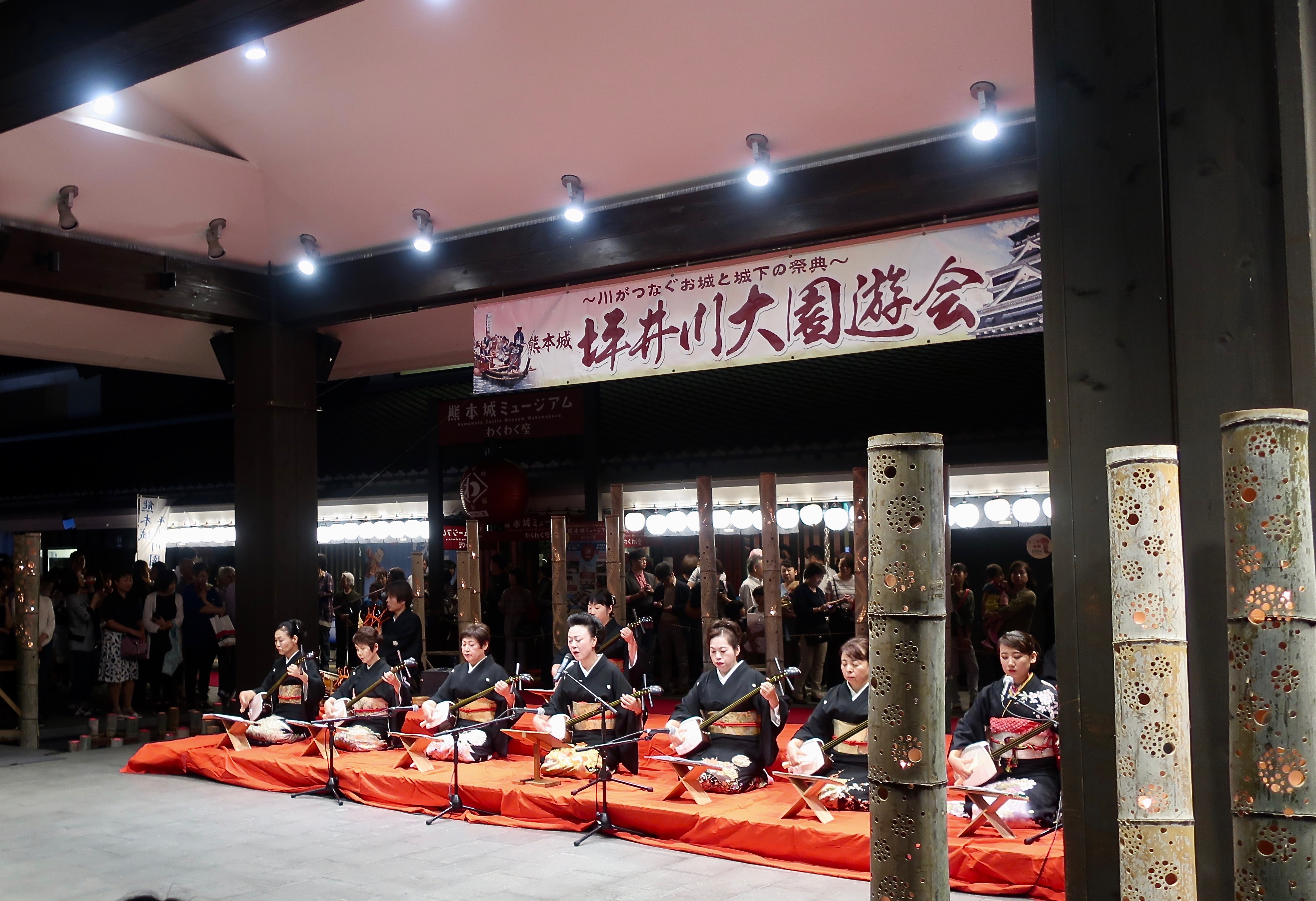 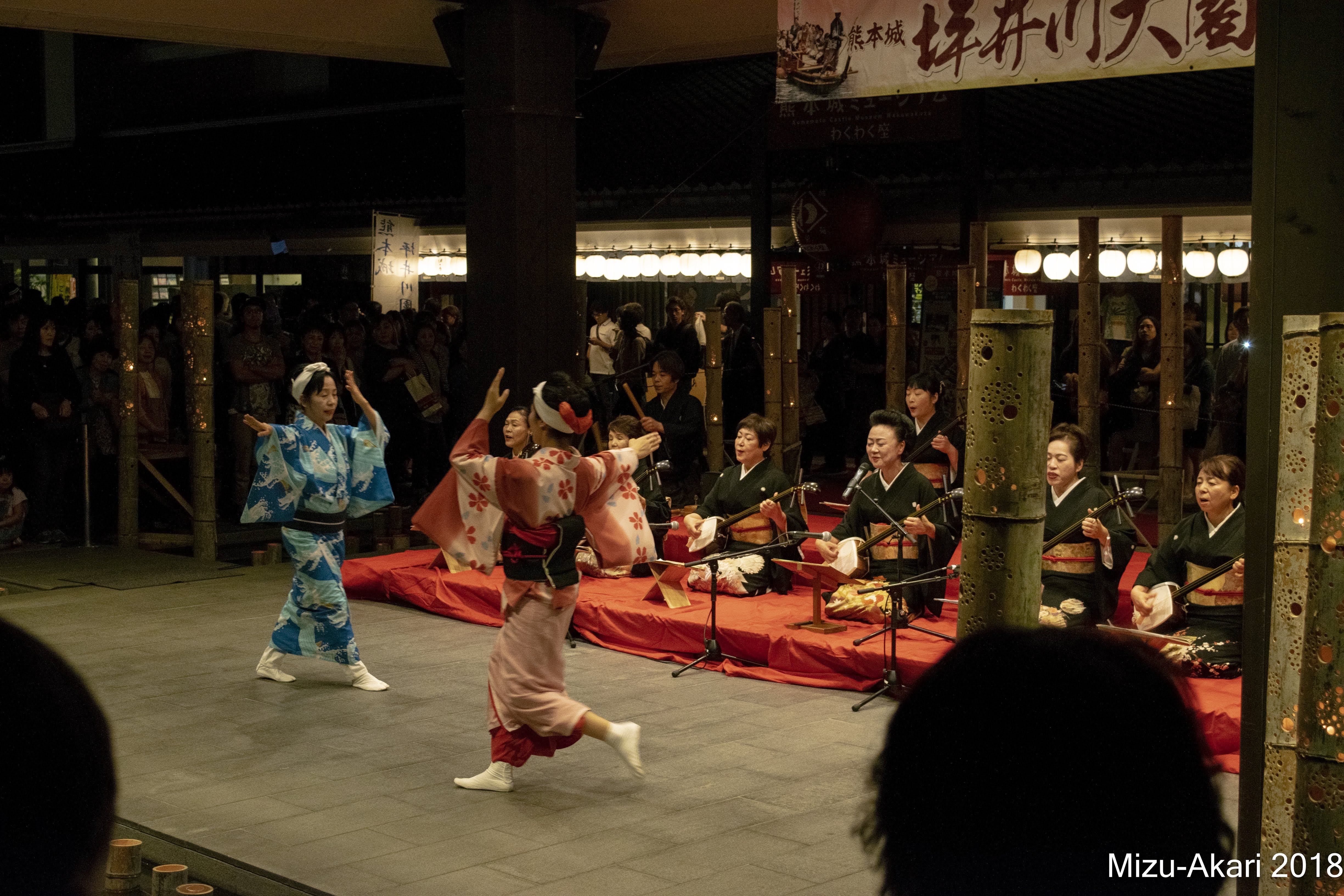 It included traditional music and dance performance and the main event was 花魁道中(Oiran Douchu). 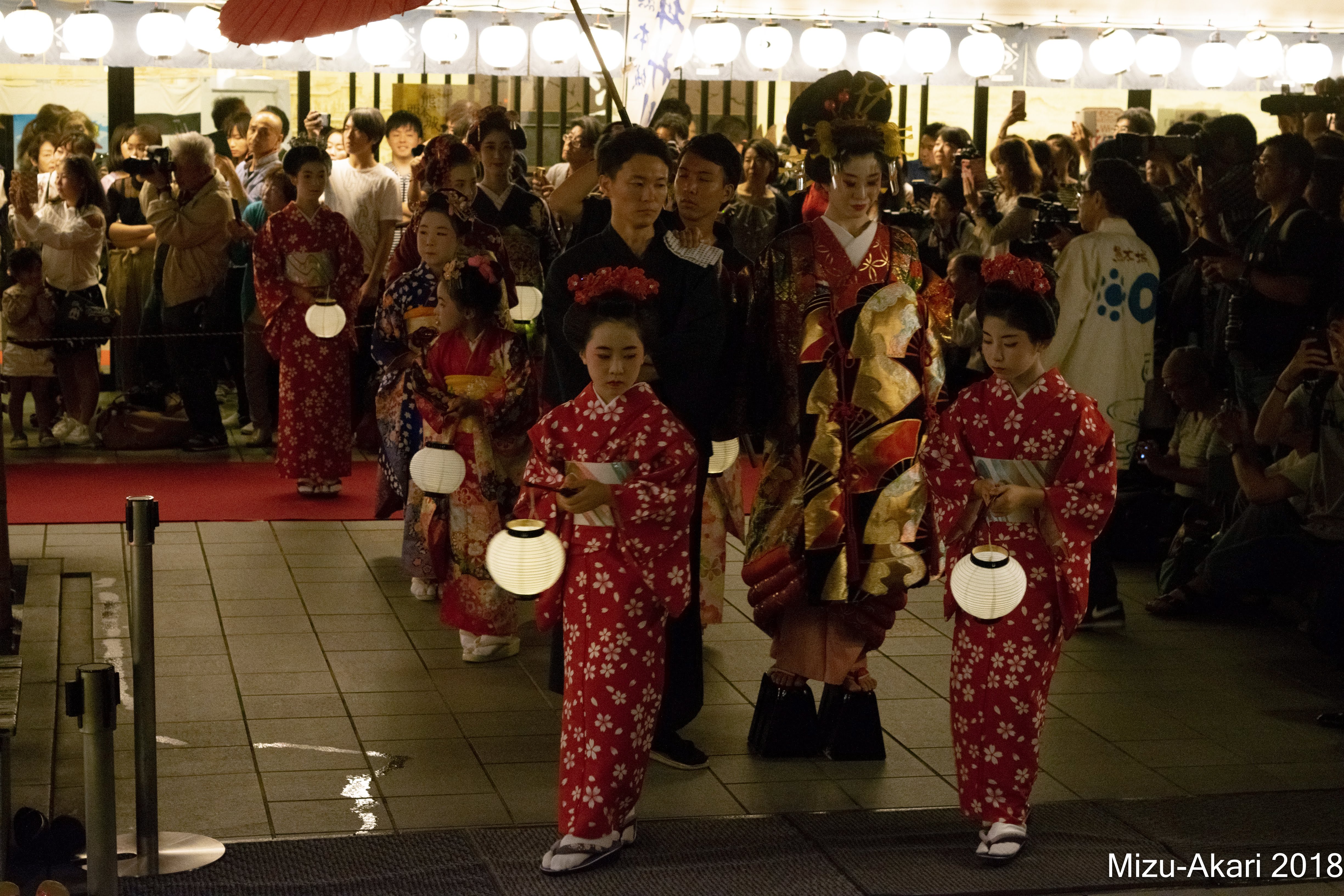 ‘花魁(Oiran)’ means the highest ranked courtesan and provided services for wealthy nobles and samurai.
When Oiran was chosen by their customer, she dressed very beautifully and prepared their lower courtesans as servants to pick up her customers.
And Oiran met her customers and walked back to her house together. 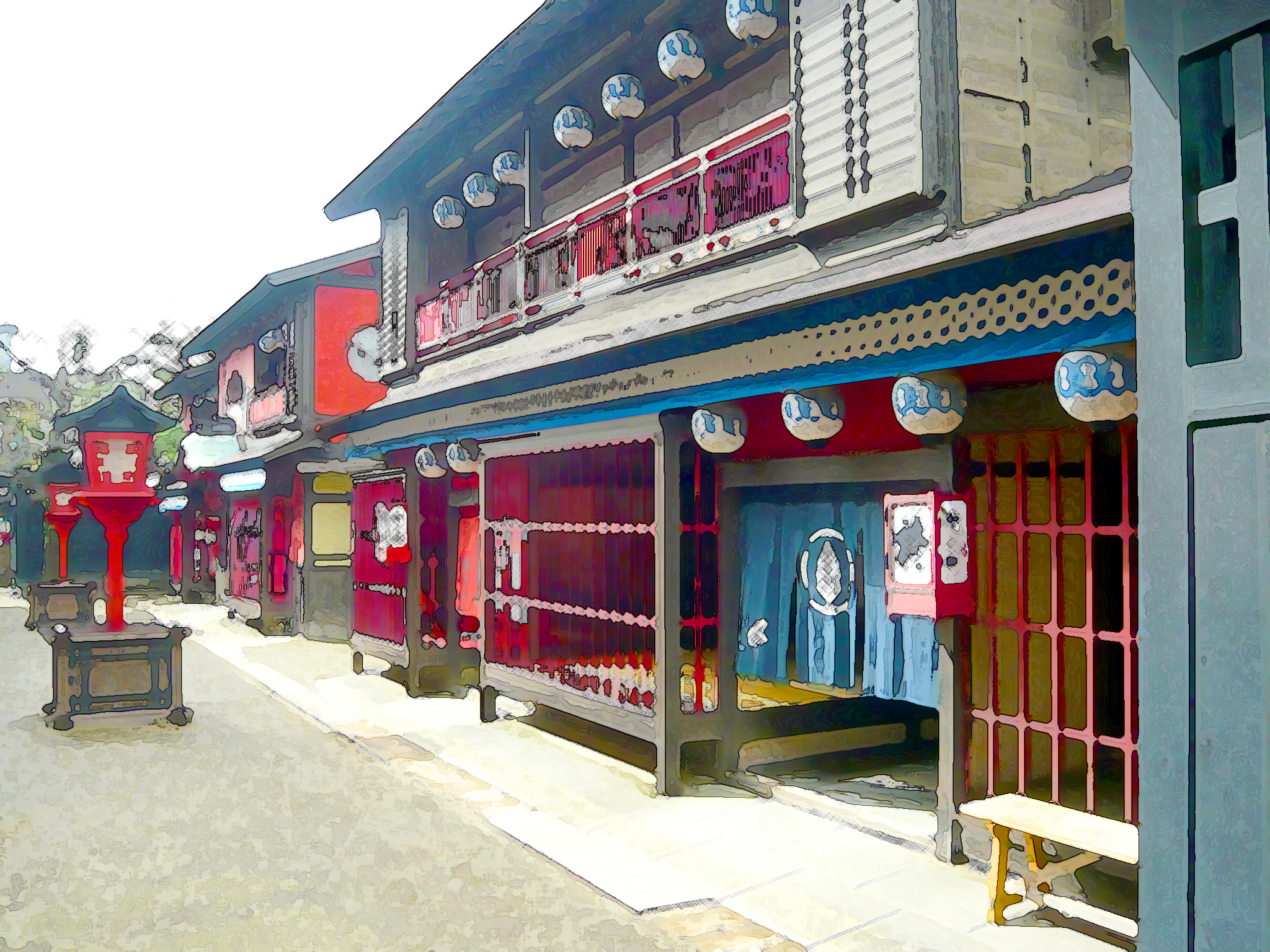 Because of the grand and gorgeous look, it looked like a parade and people called it ‘花魁道中(Oiran-douchu)’.
Since Oiran was the highest ranked courtesan, their customers paid a lot of money and they could show off how rich they were.
In the event, Tsuboigawa-yuenkai showed Oiran-douchu and it was my first time to see it. 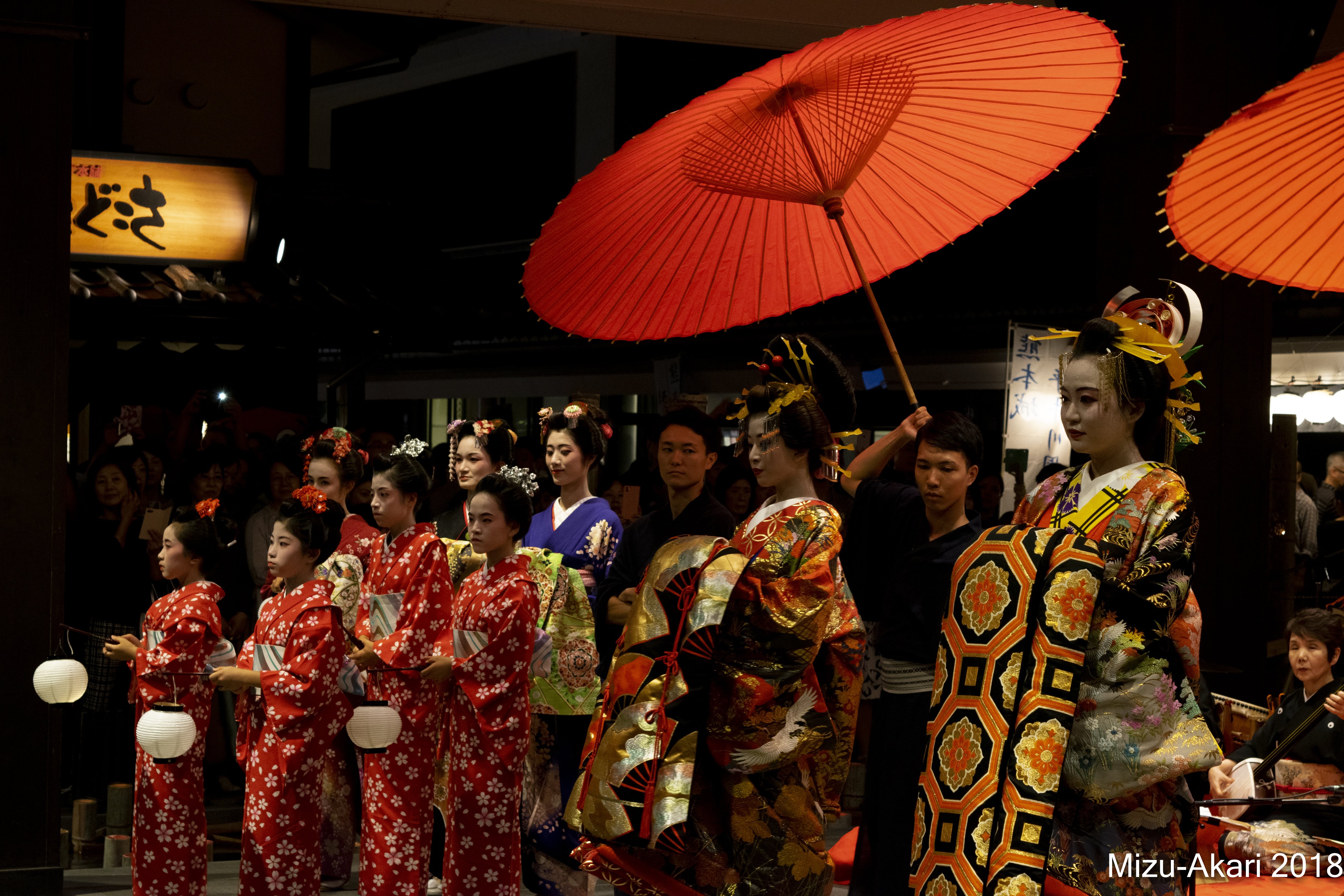 There were a huge crowd of people already so I couldn’t go closer but they looked amazing, especially their hairstyle and kimono was very beautiful.
They wore special 下駄(Geta, means Japanese wooden footwear), the heel was about 30cm high and the kimono, hair wig and accessories weight about 30kg so it was very difficult to walk without help with 男衆(Otoko-shu, means men servant) walking next to her. 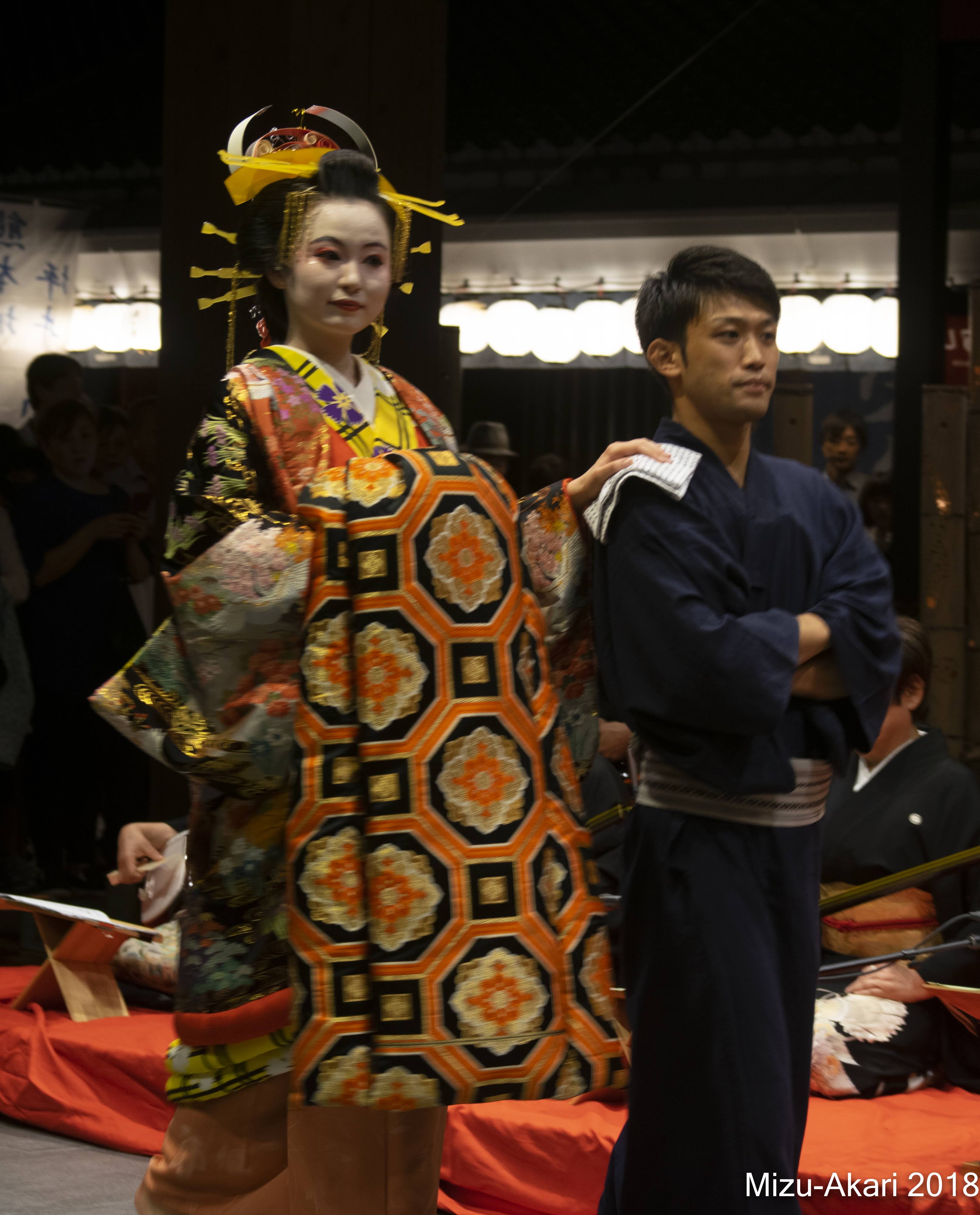 And what’s interesting about Oiran-douchu is 外八文字(Soto-hachimonji) which is the way of Oiran walking with the high Geta.
They step their foot outside widely like writing 八(hachi, means eight∞).
Because of the high Geta and also the huge pressure that they were never allowed to make mistakes(anything bad luck was abhorred there), it’s considered that it takes at least 3 years to master Soto-hachimonji.
After Oiran and their crowd arrived at the main venue, they showed how they move their feet. 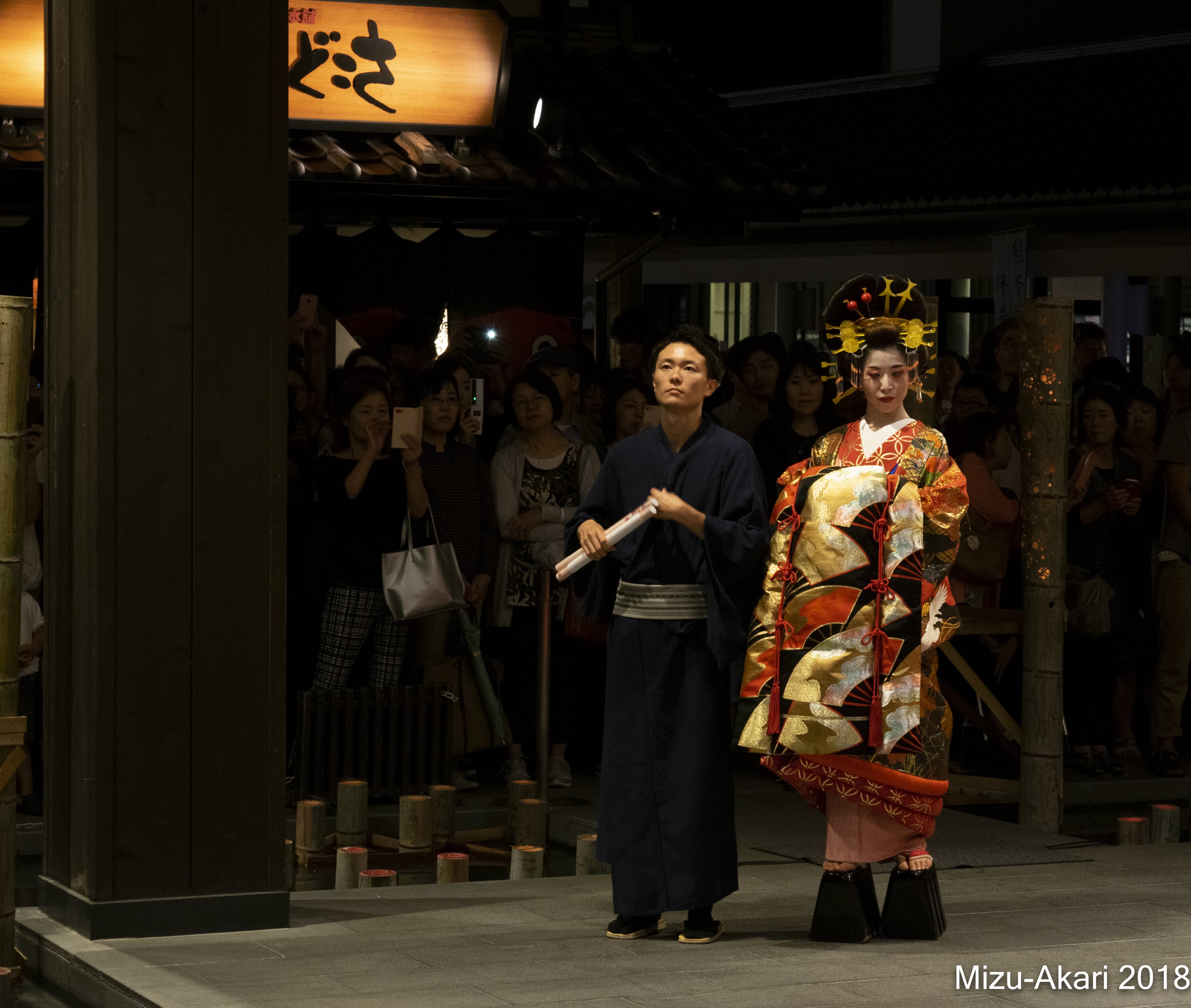 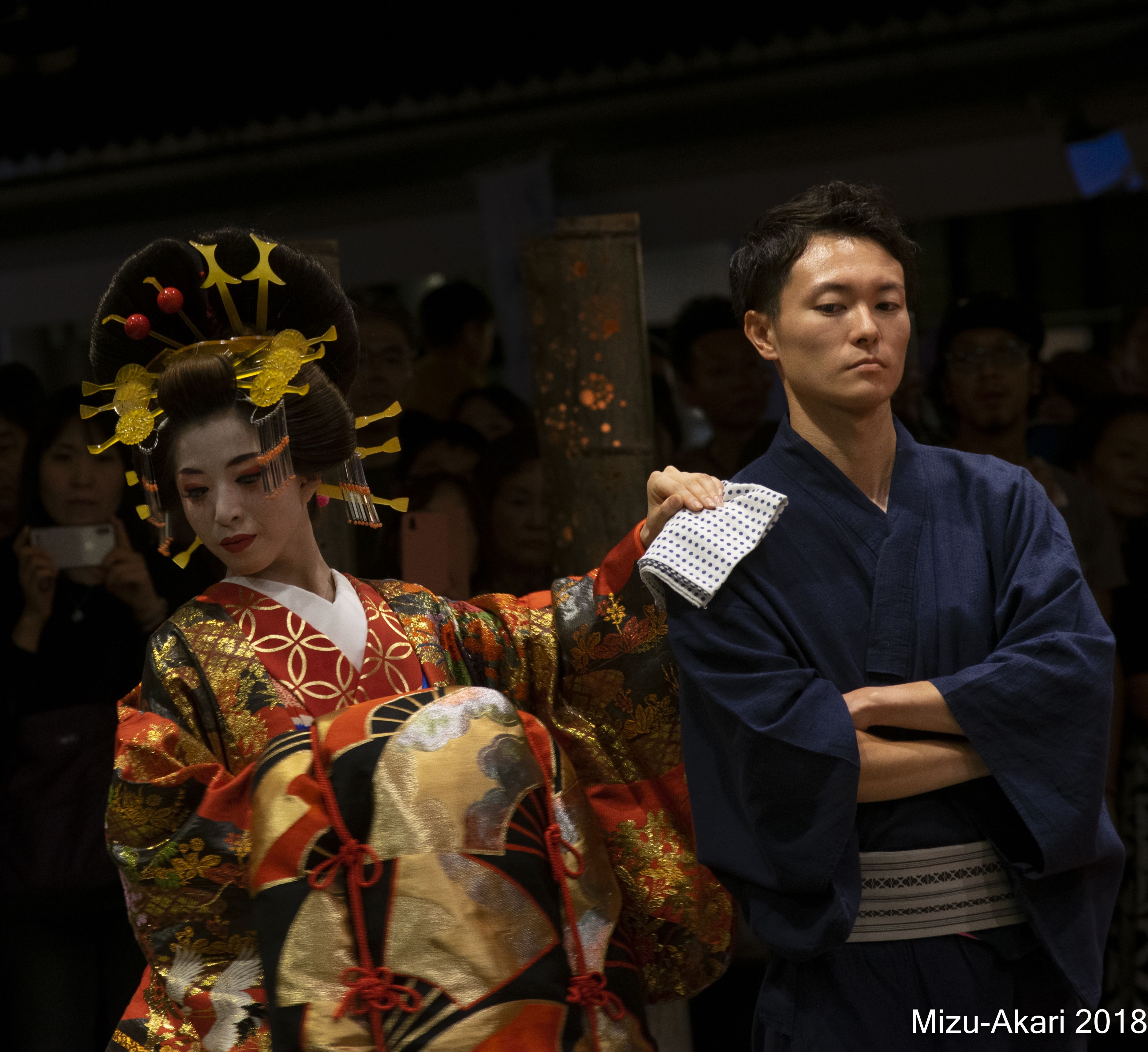 The Oiran for this event was auditioned and chosen so I thought they must’ve practiced a lot!
花魁道中(Oiran Douchu) has described Oiran walking on the street with their lower courtesans to meet her customer. 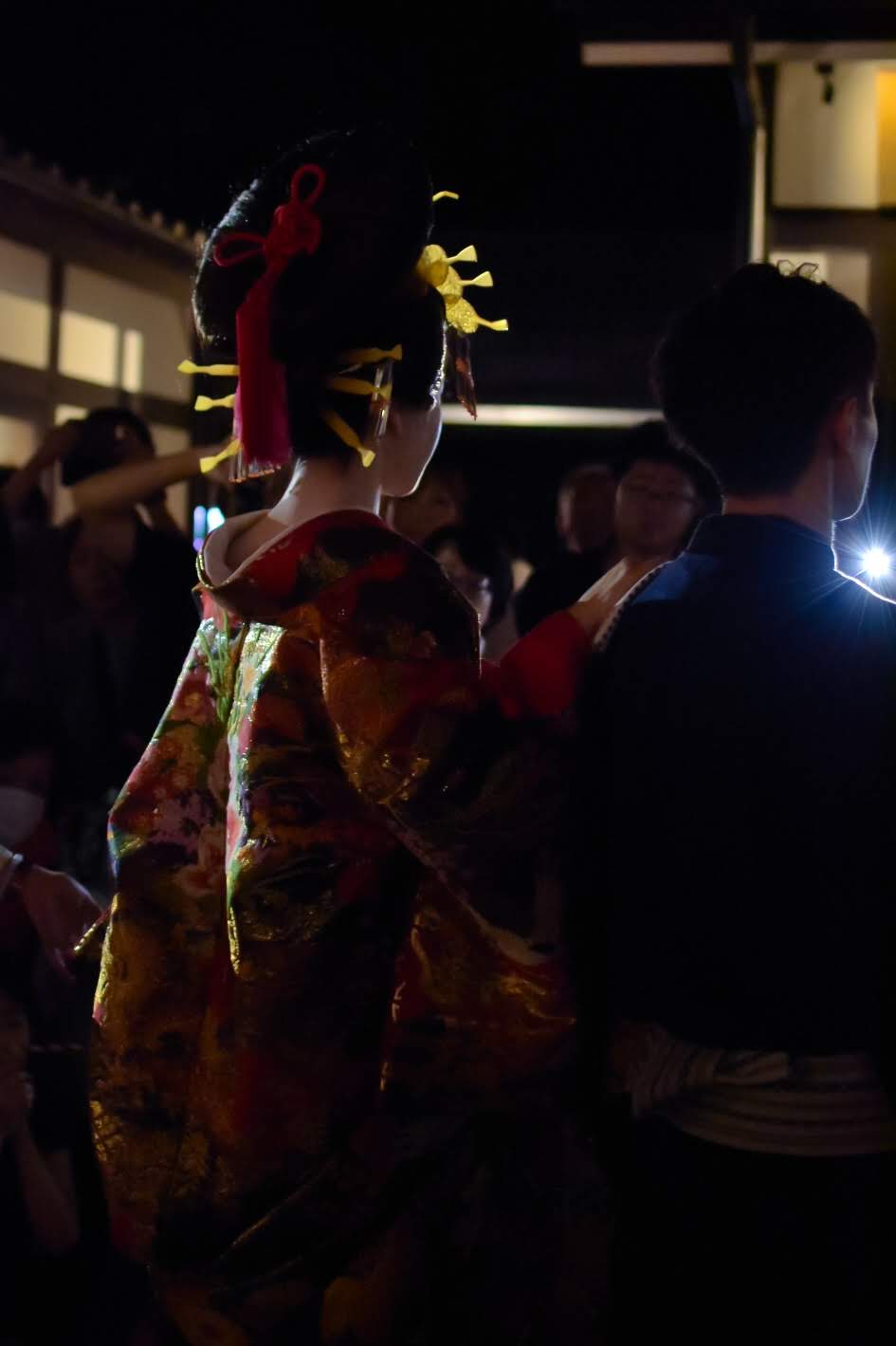 Their kimono is very vivid and gorgeous and so had attracted people.
Kumamoto was heavily damaged by the earthquakes in 2016 and still many people can’t get their daily lives back. 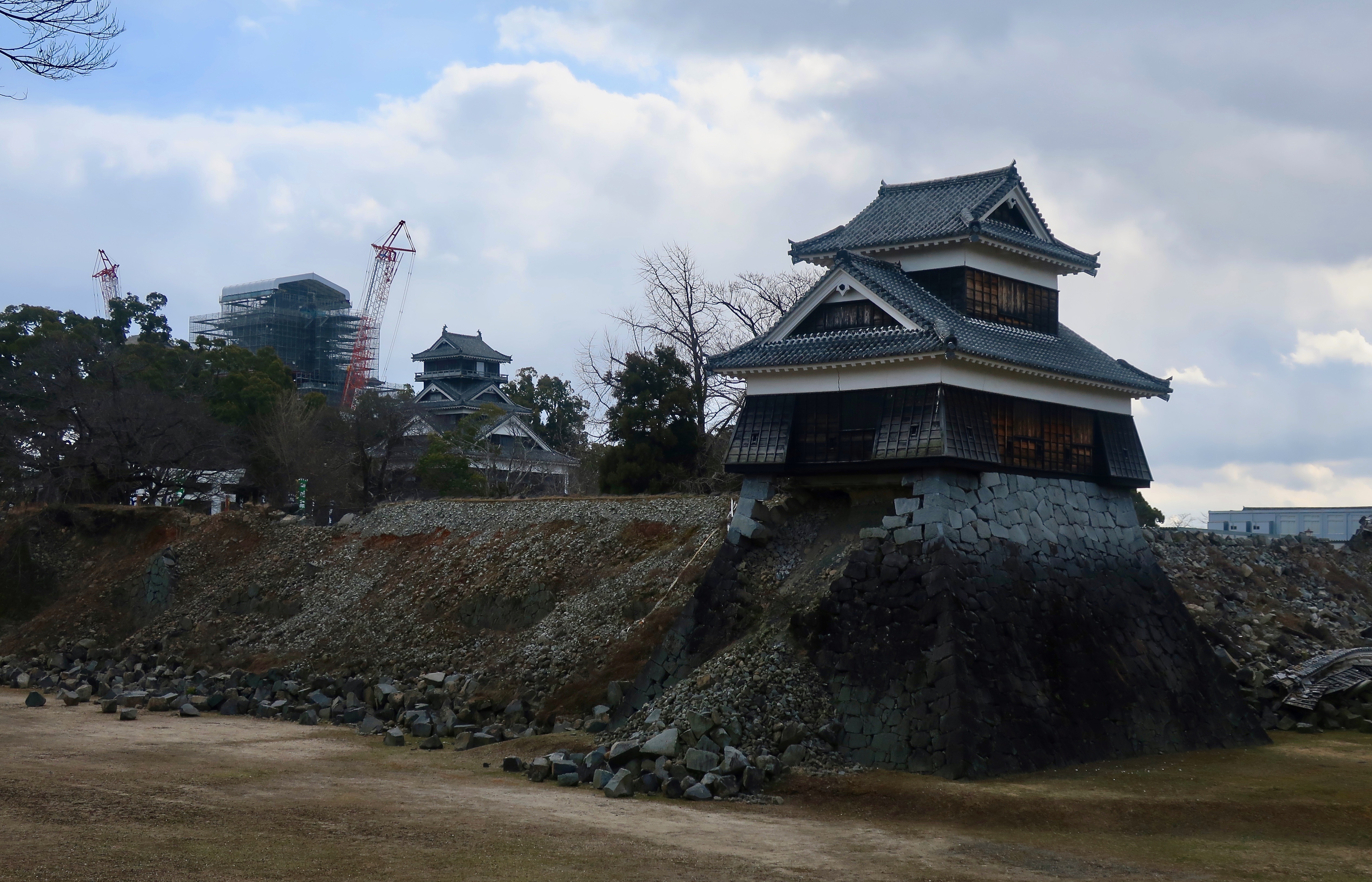 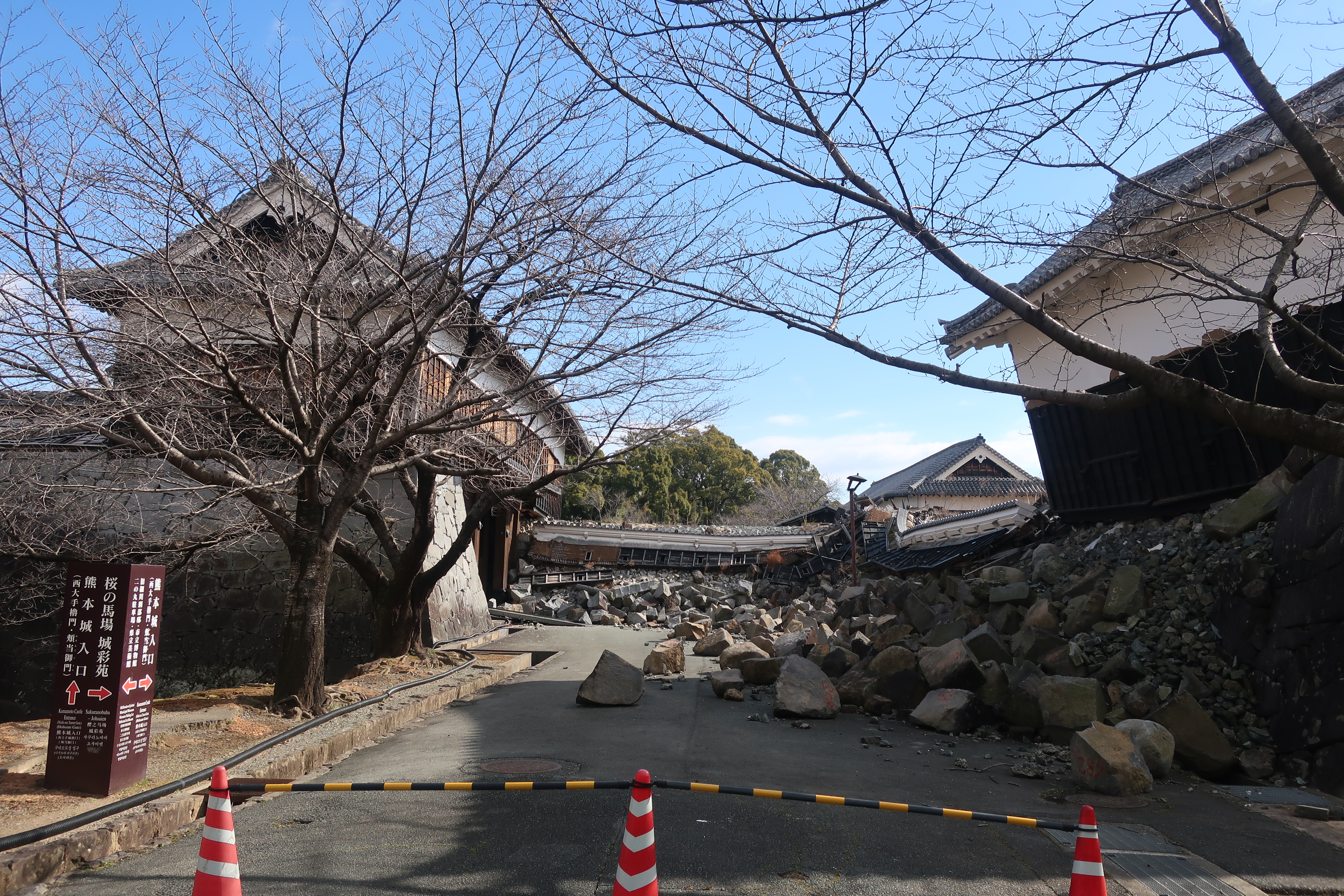 Also Kumamoto castle, which is the symbol of Kumamoto and we are proud of, was shockingly damaged and it’s considered to take at least 20 years to finish before being reconstructed.
Mizu-akari highlights how beautiful Kumamoto is and makes us remind how many amazing resources we have here and above all how we can unite tightly and help each other whenever we have difficulties. 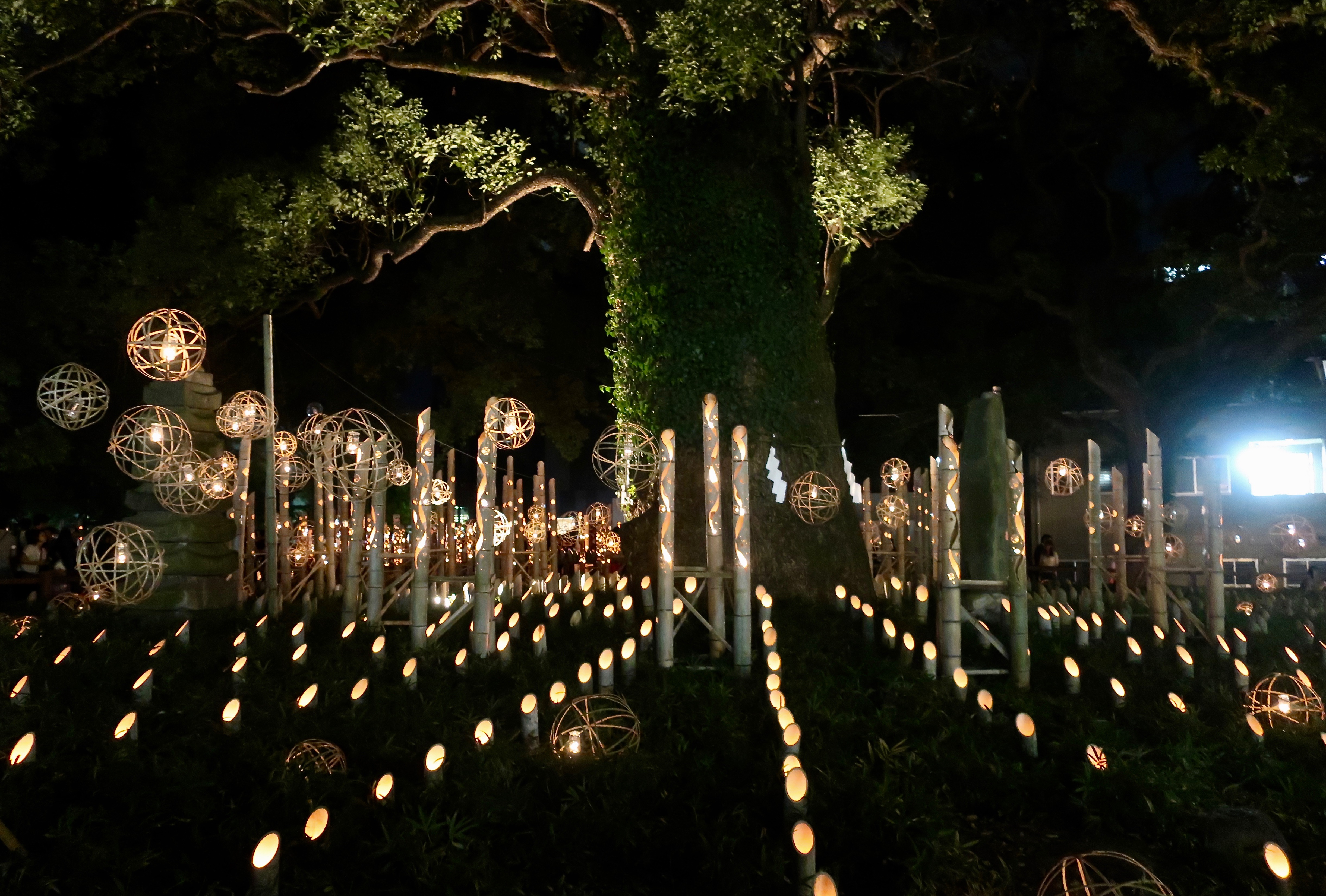 Mizu-akari is the festival of people who loves Kumamoto and I’m just so happy to be there. 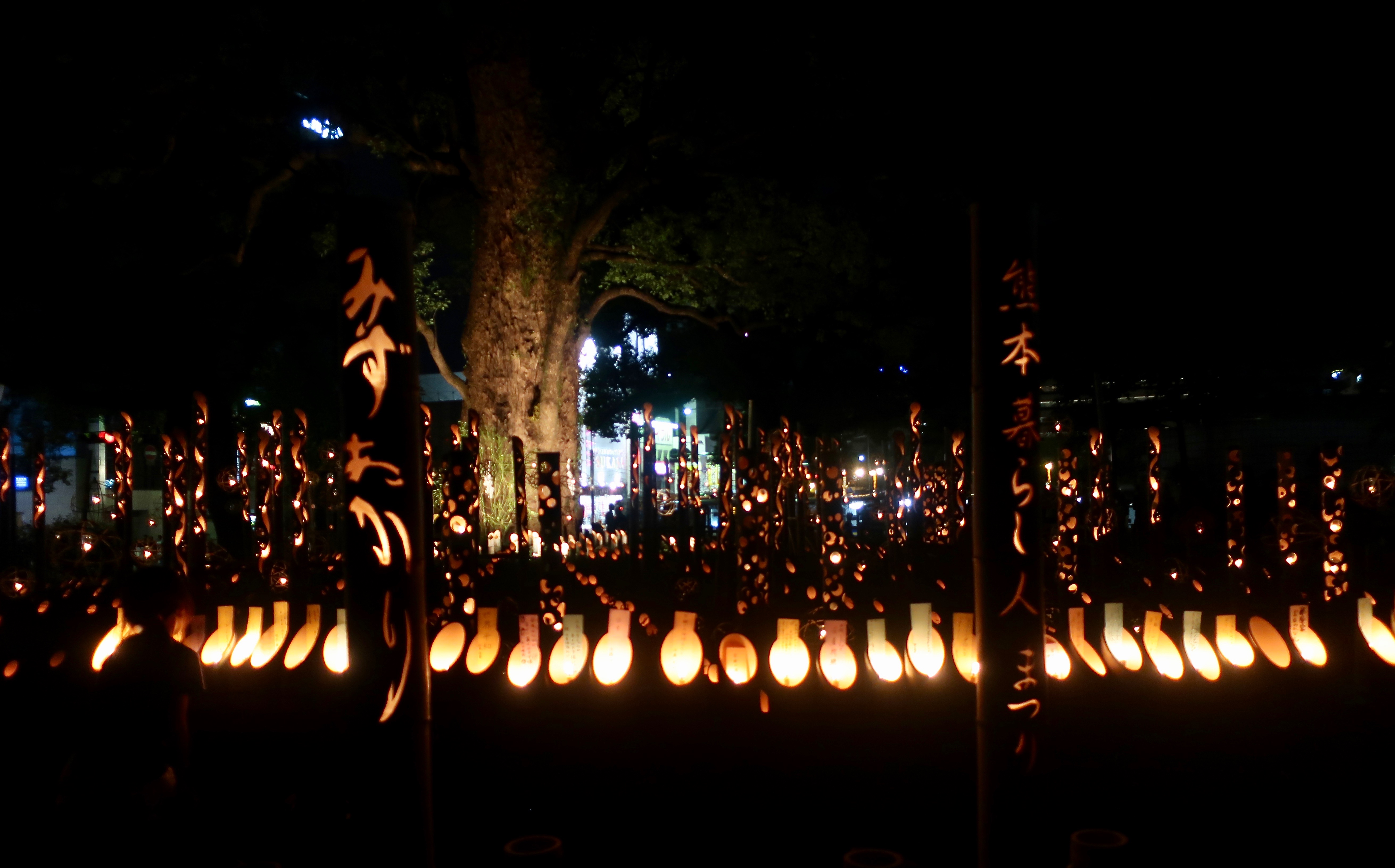 If you have a chance to come to Kumamoto next year in the beginning of October, join Mizu-akari.
You’ll see how beautiful Kumamoto is and love Kumamoto more.
【Information and links】
Official website of みずあかり(Mizu-akari)
http://mizuakari.net