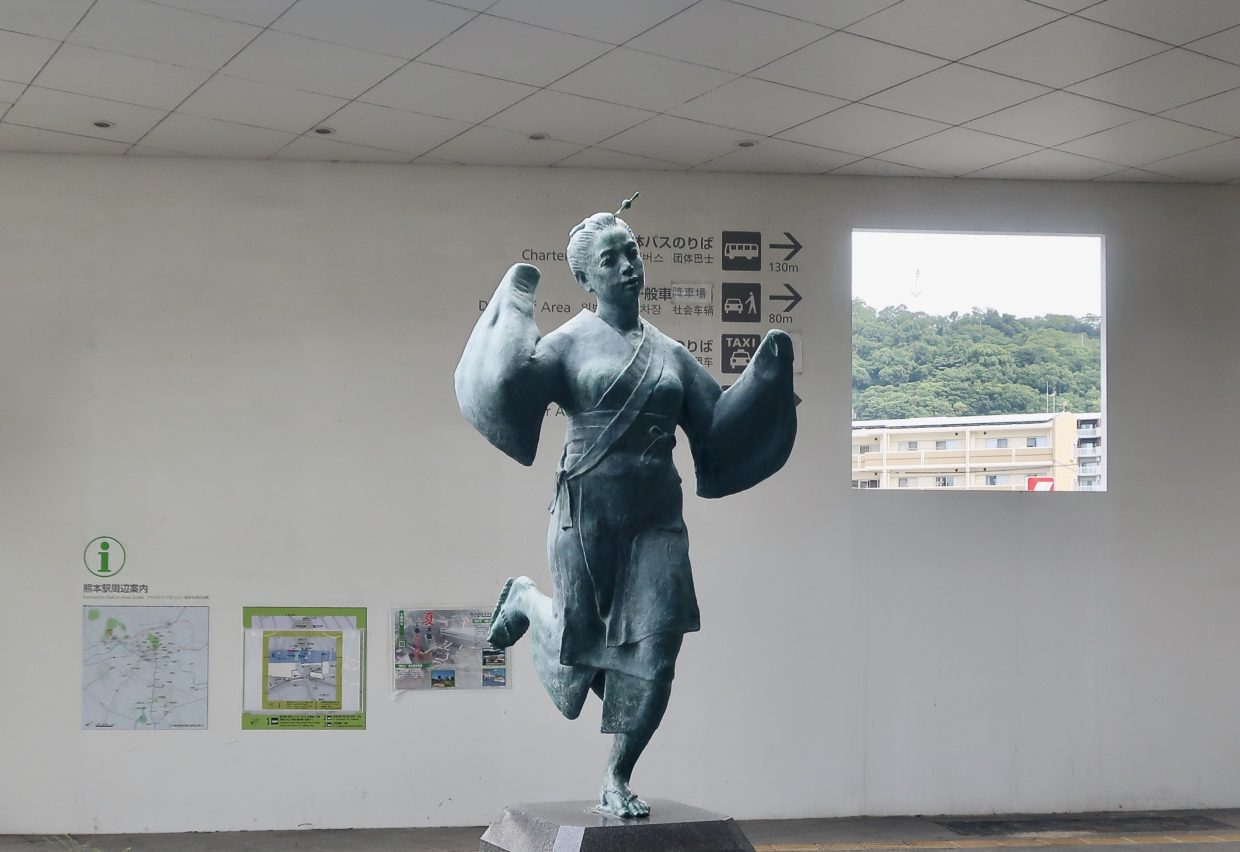 Pilgrimage of “Otemoyan(おてもやん)” ~Visit places sung in the most famous folk song in Kumamoto!~

In the last article, I introduced the stories of 登茂(Tomo) who is the model of the folk song “おてもやん(Otemoyan)” and イネ(Ine) who is the composer of the song.

I am very grateful that I have received many kinds words about the article. To be honest, I didn’t expect it at all! I am so happy that we could share amazing experience exploring the world of Otemoyan together. After getting to know about Tomo and Ine, they became lively and I feel like I have known them for a long time.

So now, have you heard of “聖地巡礼(Seichi Junrei)”? Seichi Junrei is translated as “pilgrimage”. Seichi Junrei is often used among “オタク(Otaku)”. It has been popular to visit places which were depicted in anime or manga or which has some relationship with them. For example, these days many people have visited one railway crossing in 鎌倉(Kamakura, Kanagawa Prefecture) seeking for the place which was illustrated in スラムダンク(SLUM DUNK, basketball comic).

In Kumamoto, 上色見熊野座神社(Kamishikimi Kumanoimasu Shrine) in Takamori Town is famous for being portrayed in a film, “蛍火の杜へ(Hotarubi no Mori e, Into the Forest of the Fireflies’ Light)”.

So today, I’d like to take you to Seichi Junrei or pilgrimage of Otemoyan. When you check the meaning of the lyric of Otemoyan, there are some parts you don’t get well. Here, I would like to introduce places which helps you deepen your understanding of the world of Otemoyan and local history and culture. Hopefully, you will visit some of them later!

Where can we see statues of Otemoyan?

First, let’s see how we can see the statues of Otemoyan. In the last article, I shared the photos of Otemoyan and Ine and some people asked me where they can see it. There is another statue at Kumamoto Station so I’m going to share information so that you can drop by at them and remember the story of Otemoyan!

Statue of Otemoyan and Ine in 細工町(Saiki-machi), Chuo-ku, Kumamoto City

This park was made in 2007. In 2011, the rail of Kyushu Shinkansen express was connected all the way from Fukuoka to Kagoshima(previously, some parts were not connected).

Kumamoto City built this park and statue wishing that people would get to know about the famous local character Otemoyan and not so famous but the writer of this folk song, Ine.

Ine Nagata who wrote the song Otemoyan was born in 米屋町(Komeya-machi), Chuo-ku Kumamoto City. This park is in 細工町(Saiku-machi) but both are close.

What I like about this statue is that there are both “Otemoyan and Ine”. Always people have focus on only Otemoyan. But here, people built statue of Otemoyan and Ine to respect both and celebrate their friendship.

⬆️ There is a sign written by elementary students saying,  “Do not litter in this park. Locals and elementary school students clean this park.”. Local students learn about the history of both Otemoyan and Ine and involve local activity to feel more close to them.

On the left side of the park, you will see “坪井川(Tsuboi River)”. At the end of the bridge, you will see this sign that is a shape of 扇(Ogi, means folding fan which is used in traditional Japanese dance).

Ine had been a professional Geisha and had skills of many traditional performing arts of Japan. As I shared in the last article, when Ine passed away, her pupils built a grave with folding fan at the front. It was very unique and unusual but it shows how Ine was loved and respected by her pupils.

I couldn’t find when this sign was made but I guess people showed respect to Ine and made this sign of a folding fan shape.

In Kumamoto City, you can see another statue of Otemoyan.

In 2019, the reconstruction of Kumamoto Station was accomplished. The old building was built in 1958 and it had been used for over 60 years.

This new building was designed by 安藤忠雄(Tadao Ando) who is a world famous Japanese architect.

What attract you at most must be this wall. It presents “武者返し(Musha-gaeshi)”. When you visit 熊本城(Kumamoto Castle), you will be interested in the curved wall. It is called Musha-gaeshi. “武者(Musha)” means soldiers and “返し(kaeshi or gaeshi)” means turn over. Because the wall is curved, enemies couldn’t climb the wall and reach the building. That is why Kumamoto Castle is described as “難攻不落(Nanko-furaku, impregnable)”.

This Musha-gaeshi wall is 12m high and 240m wide. It is modern and sophisticated.

In the station, there is 肥後よかモン市(Higo Yoka-mon Market). You can visit shops of Kumamoto local products, restaurants, cafes and convenience store.

As you move forward, you will go out of the building and see this Otemoyan statue.

Previously, this statue stood at 熊本交通センター(Kumamoto Kotsu Centre) but because of the urban development of the area, the statue was moved to Kumamoto Station. This statue was created by a sculpture 石原昌一(Masakazu Ishihara), an Emeritus Professor of Kumamoto University.

This Otemoyan looks lively and cheerful. Because of this statue and energetic Samba Otemoyan from Hinoku Festival, local people have image of Otemoyan as a happy and cheerful person. When you visit Kumamoto Station, visit the statue and enjoy the difference from the one in Saiku-machi!

In the first verse of Otemoyan, there is a line,

It means that a lot of men looking like 春日ぼうぶら(Kasuga Bobura pumpkin) have been following me. I am very popular with guys and my life is at the best.

⬇️ If you want to check the whole lyric and listen to Otemoyan, check the article below and get to know more!

I think it is not difficult to guess but “men looking like pumpkin” means unsophisticated men.

“春日ぼうぶら(Kasuga Boubura pumpkin)” is one of the vegetables which had been grown in Kumamoto for a long time.

Pumpkin was brought to Japan through Cambodia in the past. At that time, people call this vegetable “カンボジア(Kambojia, means Cambodia)” and the sound had changed to カボチャ(Kabocha) which we call pumpkin now.

So why people in Kumamoto used to call pumpkin as “ぼうぶら(Boubura)”? It is said that it originates from Portuguese. In Portuguese, they call a gourd family as “abobora” which Japanese pronounce アボボラ(abobora). Gradually, the sound had changed and it became “Boubura”.

Kasuga Boubura pumpkin had been grown in the large field in Kasuga area. It was a very popular vegetable at that time. Later, because of urban development around Kumamoto Station, the size of the field had been shrunken. Also, people’s preference changed and farmers shifted to grow another type of pumpkin, so called カボチャ(Kabocha, Japanese pumpkin or Korean pumpkin), not squash ones like Kasuga Boubura pumpkin.

Kasuga Boubura pumpkin is well-known as “肥後野菜(Higo Yasai, Higo Vegetable)”. In 2006, Kumamoto City designated Higo Vegetable as a brand to protect their culture and prevent them from disappearing.

There are four conditions to be registered.

Now, 15 kinds of vegetables are registered, such as 水前寺のり(Suizenji nori, seaweed), 水前寺もやし (Suizenji moyashi, sprout), etc. Kumamoto City has promoted them inside and outside of Kumamoto at events. Next time when you go to a supermarket in Kumamoto, check if there are some Higo Vegetable!

This park stands in the middle of residential area. There is a board explaining about the history of Kasuga Boubura pumpkin. There are some benches that shape is Kasuga Boubura! They are cute, aren’t they?

I visited it in the early morning so no one was there but I guess kids play at the park and feel familiar to Kasuga Boubura pumpkin!

In the second verse of Otemoyan, there is a line,

It means that soon we will have お彼岸(Ohigan) and there will be many young people gathering at the temple and listening to sermon. He will also come so I may be able to talk to him.

In the lyric, Otemoyan is in love with a man who lives in a place over mountains. But as a woman, she can’t tell him her feeling. So she looks forward to “よじょもん詣り(Yojomon mairi)” because he may join it and hopefully she can have a talk to him.

In the past, during お彼岸(Ohigan time), we used to go and visit a temple and pray at family’s cemetery. During this period, people gathered at temples and listened sermon. This gathering was called “よじょもん詣り(Yojomon mairi)”. Back then, Yojomon mairi was also a great opportunity for young men and women to meet each other.

There is a temple which is believed to be the set of Yojomon mairi in Otemoyan.

Fugen-ji Temple is one of the first temples in Kumamoto which brought the teaching of 浄土真宗(Jodo Shinshu, one sect of Buddhism). It is said that 道了法師(Priest Douryu) established Fugen-ji Temple in 1516 in 菊池市(Kikuchi City, northern Kumamoto). After 加藤清正(Lord Kiyomasa Kato) came to Kumamoto, it was transferred to the present location by his order in 1605. The main hall was burned down during 西南戦争(Seinan sensou, Seinan Civil War) which was the biggest and the last civil war led by 西郷隆盛(Takamori Saigou). Later, the main hall was rebuilt in 1883.

When you walk around this area, you will notice there are many temples with a information board like this ⬇️ .

This old castle town is collectively called “古町(Furu-machi, Old Town)”. Furu-machi is designed in a grid and divided into squares with 120m. Each grid has one temple and it is called “一町一寺(Icchou Ichiji)”, means one grid one temple.

This old town was made over 400 years ago when Lord Kiyomasa Kato came to Kumamoto and proceeded urban development. Kato designed the town in a grid to prepare for unwanted fire so that even it happens, they could prevent fire from spreading to another grid. He also invited temples in each grid and wished for peaceful governance. This “one grid one temple” is very unique even across Japan.

Fugen-ji Temple does not have Yojomon mairi now but instead, we can join “城華まつり(Shirohana Festival)” every August.

This festival’s theme is “Traditional Japanese culture”. There are food stalls of かき氷(Kakigoori, shaved ice), 焼き鳥(Yakitori, grilled chicken), etc. For events, you can enjoy performances of 太鼓(Taiko, Japanese drum), 三味線(Shamisen, Japanese guitar), 書道(Shodo, calligraphy), 昭和歌謡(Showa-kayou, oldies in Showa Period), etc. I heard we can rent 浴衣(Yukata, summer kimono) so you can enjoy the highlight of summer of Japan at most. Unfortunately this year, they canceled because of coronavirus but hopefully, we can join it next year. I will definitely check it and share the information with you!

Through the research of Otemoyan, I was amazed how local people in Kumamoto have tried to preserve their local histories and cultures. I believe they are foot print of people who lived in the past and we are always connected to them.

In the next article, I will introduce one more place which has a story of Otemoyan.

When you come to downtown Kumamoto, enjoy pilgrimage of Otemoyan. It will be an amazing experience for you to feel more closer to these attractive characters, Otemoyan and Ine!

Journey of Otemoyan(おてもやん) and the writer of the song, the most famous folk song in Kumamoto